A Couple of Book Announcements

Hey everybody, I've got a couple of book announcements to make.

So lately when people ask me what I write, I've just been saying that I write "mostly silly stories about robots". Which is more or less true. And I've come to realize that a lot of my stories just aren't readily available. They're paywalled, or they're in an anthology that's out of print, or they've succumbed to link rot, etc.

I tried the reprint markets without much success (read: any success) and it occurred to me that I have enough of them that I could just package them up in an ebook and make them available that way--especially if I could come up with a witty title and find an adequately adorable cover at a reasonable price.

So with all of that said, I'm putting out an ebook of short stories with an adorable cover and a witty title. 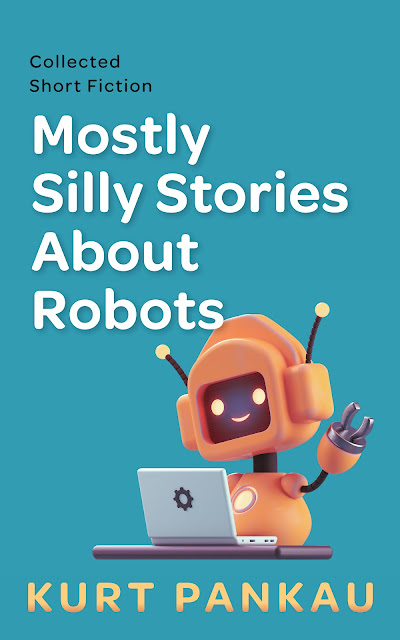 This will be coming out... soon. I need to make sure everything in there is out of exclusivity, and I want to put a few notes on some of the stories, and at least one of them I want to edit to remove some content that I now feel is unnecessarily triggering. So... soon. In the nebulous near-ish future.

"But I want something now," I can hear you saying, hypothetical reader. Well, you're in luck. My space western High Noon on Phobos is now available on all e-reader platforms. It had only been on Kindle, but now you can get it for Nook, Kobo, Apple Books, Kobo, Scribd, and Odilo. Look for it wherever you look for e-books.

'Hokay, that's all for now,