Hey, everybody. Geekway Mini 2023 was this weekend, so here's a run-down of everything I played! 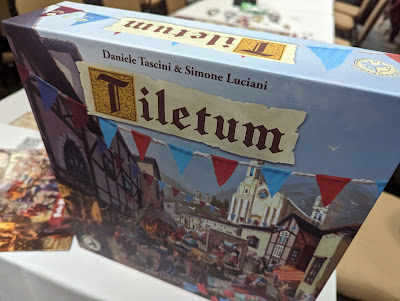 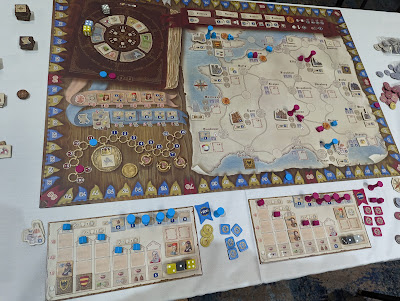 Super crunchy Euro point-salad game that blends dice drafting with contract fulfillment and a few other odds-and-ends (in the point-salad tradition). You're traveling around Europe in Ye Olde Times building and populating houses, working on Cathedrals, attending fairs, and trying to stay in the good graces of the Crown. I normally don't like point-salad games that much, but I enjoyed this one reasonably well, mostly because it didn't overstay its welcome. It had a lot of bits and set up for a game that's ultimately not that complex, so I don't know how strongly I can recommend it. 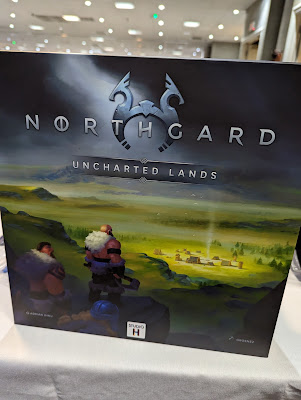 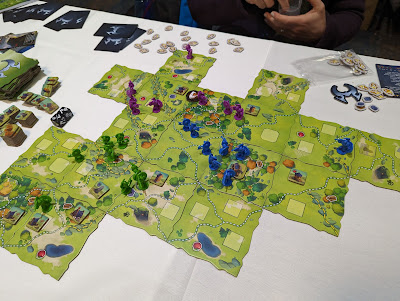 4x deck-builder with a Carcassonne-style tile-placement board setup. Viking clans are exploring the land, gathering food, lumber, and lore. Fight over land, construct buildings, recruit more armies, and close out territories in order to gain the most fame or enough holdings to claim victory. This is a moderately heavy game and I played it a couple of times and would like to try it again--and one of my gaming buddies won it in the Play-and-Win drawing, so I shall! For a 4x-er, it only takes maybe 90 to 120 minutes, which is a very respectable time. Probably my third favorite of the con. 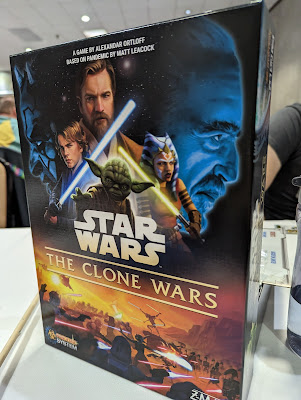 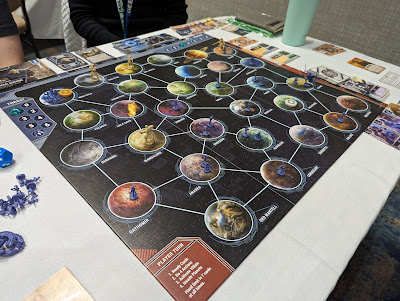 This is a Star Wars game built on the Pandemic engine, so co-op action points with group objectives, only, instead of controlling disease outbreaks, you're dealing with invading separatist droids. It strays far enough from the typical Pandemic formula to feel fresh. You have heroes with individual powers as well as missions that you need to complete in order to advance to the end of the game and a final villain that must be defeated to win. I liked-but-did-not-love it, but if I see it cheap somewhere I might pick it up to play with the kids. 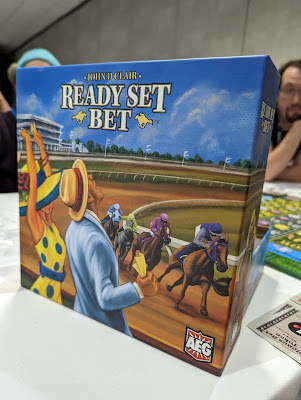 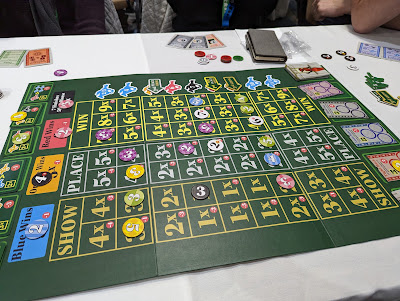 Real-time betting game where you make wagers based on the outcome of a horse race. The horses are controlled by rolling two dice and the odds are balanced with that distribution in mind. You can either have one person run the horses or use an app. This is one of those games that could be really fun with the right group of people in the right mindset, but I don't like gambling and my group did not particularly enjoy it. It's also got some poor graphic design choices. The cover is both bland and ugly, and the Prop Bet cards are printed upside-down on the reverse side, which wouldn't be a problem except they're placed on the board in such a way that you flip them sideways. Do not recommend. 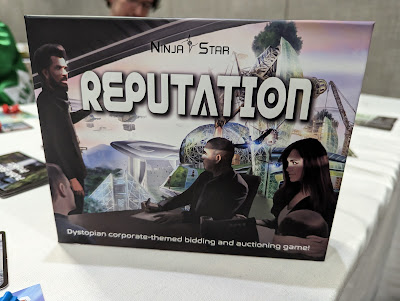 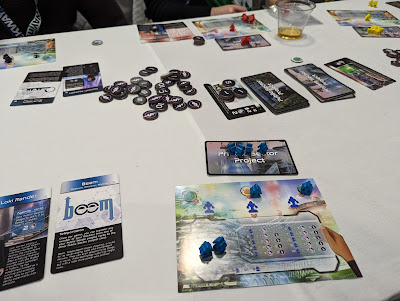 Bidding game with a confusing rulebook and some really poor graphic design. It's over-designed for the game it is, but looks like a shoddy imitation of the game it wants to be. We did not finish it. 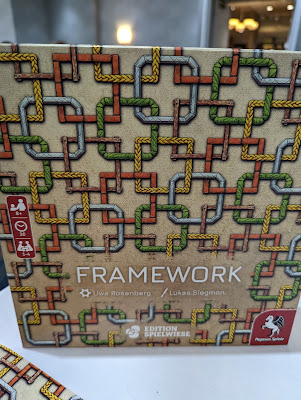 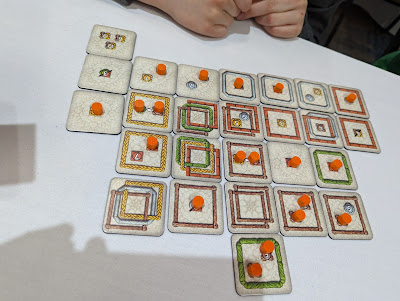 Tile-drafting and pattern-matching game. This is the latest from Uwe Rosenberg (best known for Patchwork) and easily my favorite of the con. Draft tiles to build networks of frames that complete tasks. The active player gets both first and last pick (meaning they also get stuck with whatever no one else wants). When a task is complete, you put a marker on it. Whoever runs out of markers first is the winner. It's simple, tight, elegant, puzzly, gorgeous, and way, way better than it has any business being. It's coming out in retail soon and I've already pre-ordered my copy. 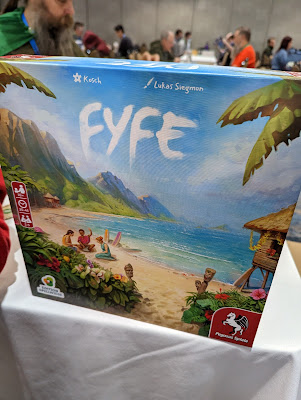 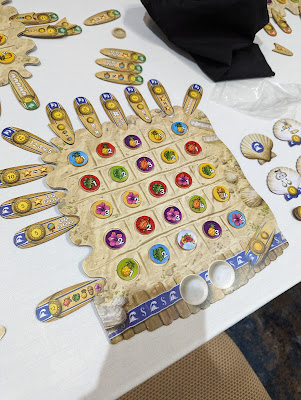 Pattern-matching with a Pacific Island theme. You will place 25 pieces on your board. Each piece has one of five numbers, one of five shapes, and one of five colors. Get points for matching rows to goals like "all different numbers" or "all shapes in this order" and get bonuses for being the first to finish a goal or scoring multiple rows at once. It's pretty, simple, and pretty simple. It's fine. If someone had it out I'd play it again.

Fall of the Mountain King 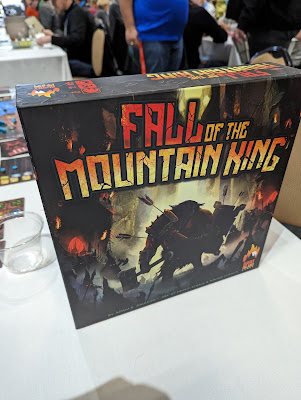 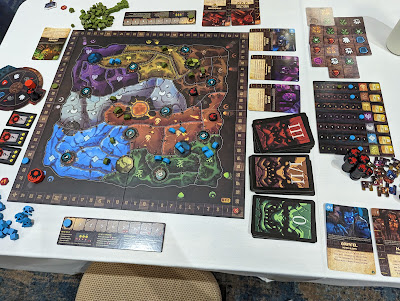 Area control with action points and tile placement and a lot of other things going on actually. It's not quite point-salad, but it has aspirations. This is a prequel to In the Hall of the Mountain King. In FotMK, you are the hero leading a group of trolls defending your homeland against an invasion of gnomes. However, we know we're going to lose, because prequel. So we're just trying to go out in the biggest blaze of glory imaginable and earn the esteem of the troll clans so we may live on in legends and inspire future heroes, etc, etc, etc. It's a bit more complex than it really needs to be, but it's pretty fun anyway. I won a copy in Play-and-Win, so I'll definitely be playing it again. 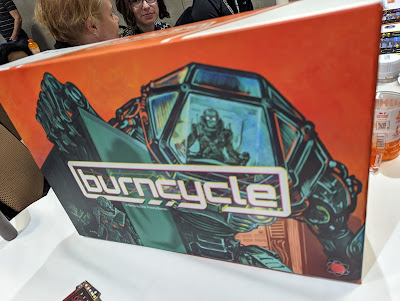 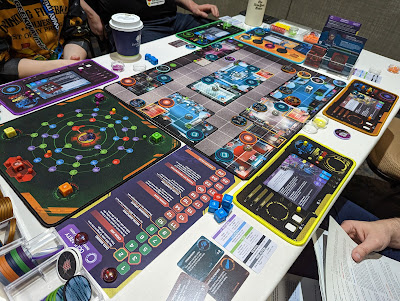 This was the big game of the con. It's a co-op scenario game in which a group of robots are trying to undermine an evil corporation. It's very pretty and insanely complex. After something like three hours we'd managed to get through a single round of play--most of that spent on set-up and learning--and we ended up abandoning it as some of our group were not having fun and we were staring down the barrel of the time limit for our play to count towards Play-and-Win. I still don't really get it, although I would be interested in playing it again. But I would need to do my homework ahead of time. 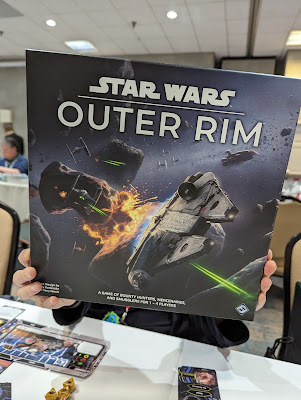 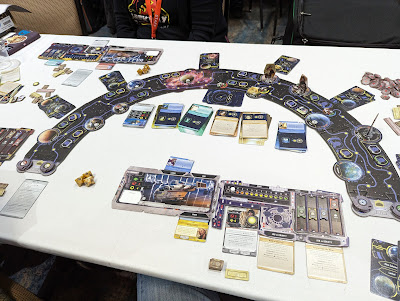 Pick-up-and-delivery with contract fulfillment in the Star Wars universe. You're a bounty hunter, smuggler, or some other form of scoundrel doing contract work in the Outer Rim worlds like Ord Mandell, Kessel, or Tatooine. Hire crew, upgrade your ship, claim bounties, do heists, and manage your reputation among the factions patrolling the area. Your opponents are friendly rivals, so you might trade with them, or you might fight, or you might need to capture or kill one of their crew if the bounty on them is big enough. It's a fairly meaty game without being overly complex. People describe it as the game Firefly should have been. It was my second favorite and I've ordered a copy of this one as well.

That was all the new games I played, but I got to revisit some from past cons. I got to replay Planet Unknown, which I still like quite a bit, and The Night Cage, which I found a little bit too intense the first time I played it, but I enjoyed it more now. I got to play a game of Veiled Fate and introduce some people to Phantom Ink, Poetry For Neanderthals, So Clover, Skull, and my favorite last-day-of-the-con game to play because our brains are all fried: Why First?!