A few posts ago I mentioned that my dad used to put his vinyl albums on cassette. Well, today I want to talk about me putting CDs on tape.

I was obsessed with CDs from the time I was in middle school, and began collecting music aggressively through record clubs--I was a member of both Columbia House and BMG at different points in my life. But I never had a car with a factory-installed CD player until... well... about six years ago. Oh, I rigged up tape adapters and what-not, but as a teen and college student, mostly I would take my favorite CDs and put them on tape--and this was how I consumed most of the music I listened to. Gas was cheap in the late 90s, so I was in the car constantly. Not surprisingly, some of my favorite albums today are the ones I listened to over and over again in the car because they fit conveniently on a blank tape. Format, as they say, drives function.

Blank tapes were available in either sixty or ninety minute increments. So you could take a fifty-five minute album and put it on a sixty-minute tape easily enough, probably, assuming you could break it up into two sides that were less than thirty minutes each without splitting up a song. Quick side-bar: I once listened to an 8-track from Starlight Orchestra that flipped sides right smack in the middle of Pennsylvania 6-5000 so the struggle is real, y'all.

There's more of an art to this than you would think. You couldn't just start at the beginning, because tape leads are clear and you can't write to them. You have to find that spot where the leads are connected to the actual magnetic portion, queue that up by winding the cassette reel with a pencil, and then wind it back a smidge because they would jigger around when you put them in the player. I had a component-based stereo and could run the CD player output through the receiver and into the tape deck without actually having to run it through the speakers. Tape decks meant for recording would have a rudimentary trim control, so you'd want to adjust that so it'd get right up to the red line without crossing over. That way you'd get a decent volume but no clipping distortion. You'd figure out what brands had the best quality--not that there was a discernible difference in audio fidelity, but you don't want the cheapies that would snap or blank out sections after a mere fifty listens. TDK made a "CD-ready" 74 minute tape. It was... the worst of both worlds really. Completely useless. Just get 90s and 60s, but I mostly stuck to 90s.

I like 90-minute blanks because the ideal situation would be to find albums that were just under forty-five minutes, and then pair it up with another album from the same band. I had quite a few of these. It was perfect because you didn't have to babysit the recording like you did with a sixty-minute album. On those, you'd have to figure out where the breakpoint would be and then stop the CD player between those songs--but keep taping in case there was anything already on the cassette that you wanted to erase. On a forty-five minute album, however, you just do your level-setting and tape queueing-up, hit record on the tape player, hit play on the CD player, turn off the speakers and come back and collect it when it was done. So I was constantly looking for good pairings, usually from the same band.

I had a tape with Radiohead's Kid A on one side and Amnesiac on the other. There was a weird artifact on the tape I made--apparently I'd taped over something music that hadn't gotten completely erased, so during the quiet bits between songs, you could hear very faintly big-band music. I assumed it was there on purpose. The album was produced my Nigel Godrich and that's absolutely the sort of thing he would do. But when I went back and listened for it on the CD, it wasn't there.

Other odd scenarios would come up. Maybe you'd have something that was just over the length you wanted, but you could squeeze it in if you skipped a mediocre song or paused the recording during the blank space before the hidden track--because in the 90s everything had hidden tracks at the end. I had to do this with my Jars of Clay tape, which had Much Afraid on one side and their self-titled debut on the other. The eponymous album is an hour long, but it's got a hidden track and then a ton of goofing-around-in-the-studio noise at the end that had no reason to be there, so I just faded it out.

Something truly weird happened on my Offspring tape. Smash is forty-seven minutes long, but there's about five minutes of blank space between the instrumental riff (that on their next album would become Change Your World) fading out and the Arabic re-imagining of Come Out And Play. Snip, snip, easy peasy. And then I paired with their next album Ixnay On The Hombre which is only forty-two minutes long. Worked out perfectly. I set up the recording, pressed play, turned of the speakers and walked away.

Did you know that Ixnay On The Hombre has a hidden track? I didn't. It's a very brief spoken word piece called Kiss My Ass performed by Larry "Bud" Melman. I'd listened to this album dozens of times without ever hearing it because after Change Your World (the real version this time) faded out I would either swap out CDs or fast-forward to the end of the tape, depending on what format I was listening to. I became aware of its existence while in the car with my sister, Liz. I hadn't bothered to fast-forward for some reason, and we were in the middle of a heated discussion about which of us had taken more after-dinner mints from the restaurant we were driving home from. The conversation went something like this...

ME: I think I had more while we were at the restaurant.
LIZ: Okay, but I think I took more from the dish when we were leaving.
BUD MELMAN: I think you guys should try heavy metal. Kiss my ass! Ha, ha, ha, ha...


We were legitimately wondering if the car was haunted or if perhaps we had died or something. We were flabbergasted--didn't even realize the tape player was going because there hadn't been any music playing! We sat in stunned silence until the cassette flipped over a couple minutes later and we figured out what had happened. 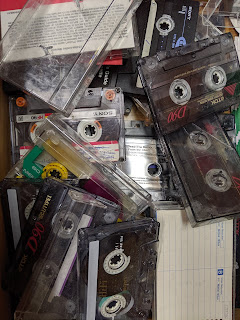 None of them are labeled. I used the same tapes to record my own music, which is why I kept them, but I have no idea what I'd hear if I put one in... and I also don't have anything to play them on. So they will sit there until I do.