Bottom Of The 9th (Acquire-To-Zendo) 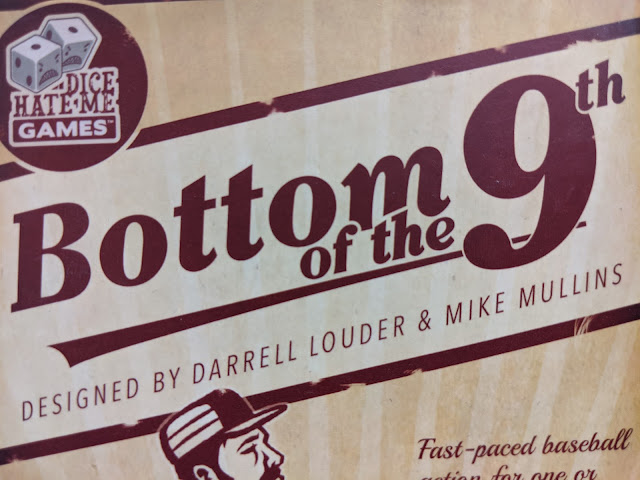 Bottom Of The 9th is a two-player bluffing/deduction game played with dice. It pits the underdog home team against the traveling champions in a winner-take-all high-stakes half inning of baseball. The conceit of the game is that by some miracle the underdog home team has kept things at a tie so far, but they're exhausted. If this goes into extra innings, the champions are surely going to beat them. But if they can just score one run in the bottom of the 9th inning, then they win it all. 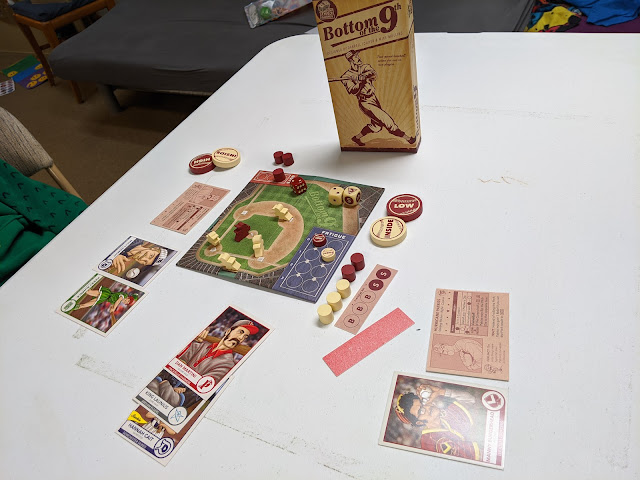 In Bottom Of The 9th, you and a friend compete head-to-head, one player as the underdog home team, one as the champions. You each pick a roster of players, six for the batting home team and two pitchers for the champions. 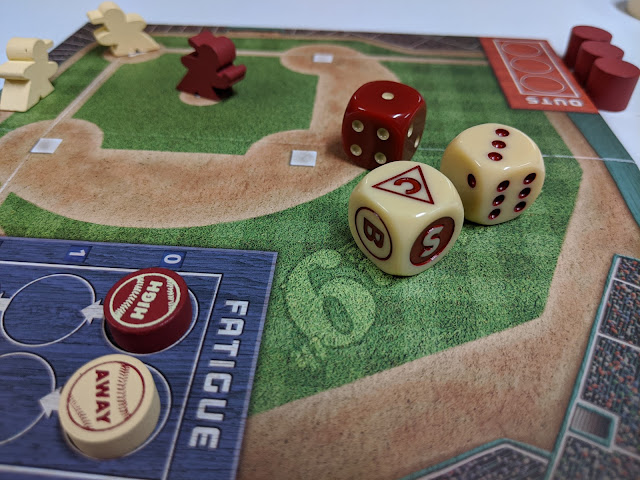 Pitching and batting are managed with dice rolls. The pitcher has two dice, one a standard d6, another that has sides labeled "S", "B", and "C" that determine whether the pitch is in the strike zone (S), outside the strike zone (B), or painting the corner of the plate (C). The batter then rolls their swing in an attempt to a) beat an "S" pitch, b) get under or match a "B" pitch, or c) match a "C" pitch perfectly. If they make contact, both players roll their dice in a roll-off and whoever gets a 5 or 6 first gets their preferred outcome--the batter takes a base or the fielder gets an out. If the batter matches an "S" pitch, that's a foul, but if they manage to get a 6 against an "S" pitch of 5 or lower, that's a "crush" and the batter gets an extra roll that could get them an automatic single, double, or a game-winning home run. 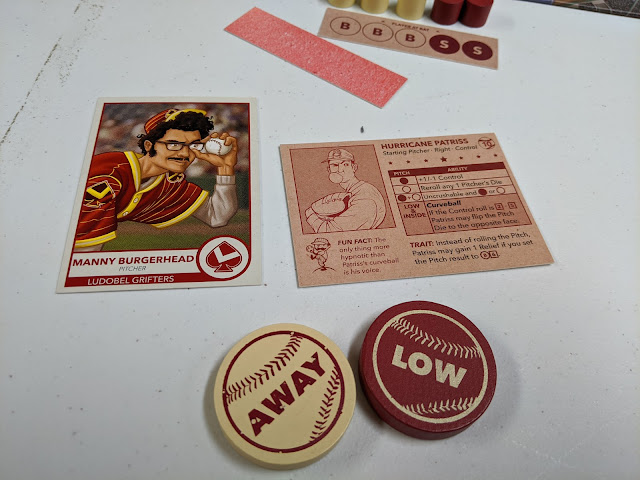 Die rolls can be manipulated in a contest call the stare-down, which is the main bluffing/deduction mechanic of the game, that revolves around what type of pitch the pitcher is going to throw. Pitches can be either high or low and either inside or away (up the middle is, apparently, not an option in this game). Each player has two tokens that they use--the pitcher to determine what kind of pitch they're throwing, and the batter to guess. These are set in secret and then revealed at the same time. If the batter guesses either or both directions correctly, then they get an opportunity to manipulate their dice, usually by either re-rolling or incrementing the value up or down by 1. But for each one they get wrong, the pitcher gets to manipulate theirs. 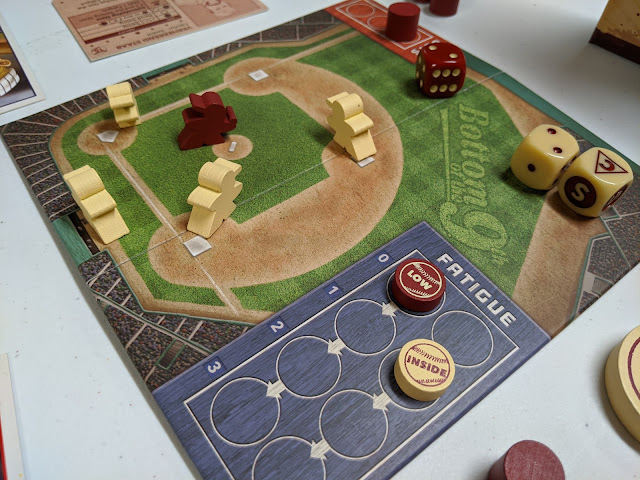 Additionally, the pitcher has an "ace" pitch that is one specific combination of low or high and inside or away. It grants them a bonus that can only be counteracted if the batter guesses both directions correctly. But throwing their ace--or even throwing half of it--fatigues a pitcher's arm, and once they fatigue it completely in either direction, they'll only be able to throw the opposite, meaning that the batter will know what it is and will get lots of die-manipulation bonuses. So the pitcher is incentivized to either throw their ace or save their arm, but doing on those two pitches will make them too predictable. And that's where the bluffing and deduction comes in, as the pitcher and batter try to psych each other out. Because if the home team scores at all, they win. 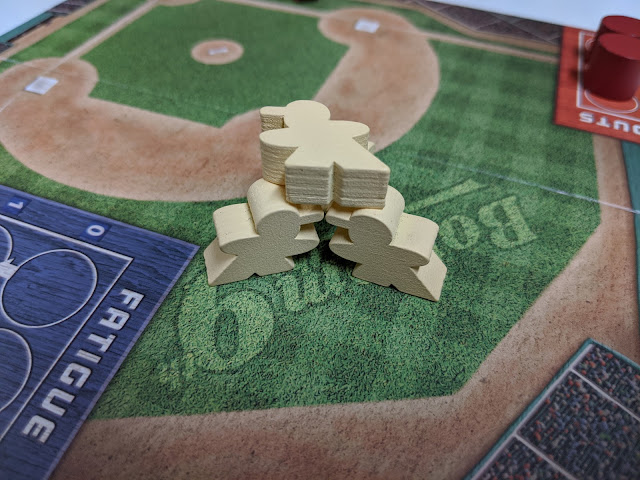 Call me a traitor to my baseball-loving city of St. Louis, but I find it to be an overall dull sport punctuated by occasional moments of excitement and tension. Bottom Of The 9th distills that excitement and tension down to a single half inning in which everything is on the line. The game finds a good way to balance the randomness of a dice-rolling game against the intentionality of player choice in a way that feels very true to baseball. Yes, whether you hit or not and how hard you hit are determined by chance, but if you can guess which way the pitcher is going to throw, then you can at least have some affect on it.

The game leans hard into its aesthetic, and it's great. The batters and pitchers are baseball cards with their unique rules listed on the back as though they were stats. You track balls and strikes on what looks like a stick of gum--the kind you'd get in a pack of baseball cards. The player names and teams are all delightfully goofy, with art to match. It's a short game too, playing out in around ten minutes or so, and while it has some complexity, it's simple enough that I can play it against my children and they have a decent shot at winning. (In the game I played to take these photos, my 8-year-old did in fact win.)

Despite the different character powers, there's not much player choice apart from the bluffing/deduction mechanic, meaning the game doesn't have a lot of varied gameplay unless you play it against a number of different people.

Yes, almost too expansible, actually. There are a couple of small expansions that add new players and give the game a bit more depth, including a Sentinels Of The Multiverse crossover expansion. On the other hand, there's a big Clubhouse expansion that's also an upgraded storage solution and it really adds too much. This is a game that takes ten minutes to play. It doesn't need a campaign mode or a budget you use to draft power-ups as part of the setup.

There is also a digital version from Handelabra that's pretty good.

It's a small game, but a fun one, one that knows and enjoys its aesthetics and flat-out refuses to take itself too seriously. The way it balances bluffing and dice-rolling manages to evoke baseball surprisingly well.

Tune in next week when we troll the underwater depths with Captain Sonar...
In Acquire-To-Zendo, Kurt is going through his favorite board games in alphabetical order. Read the explainer or see more posts.