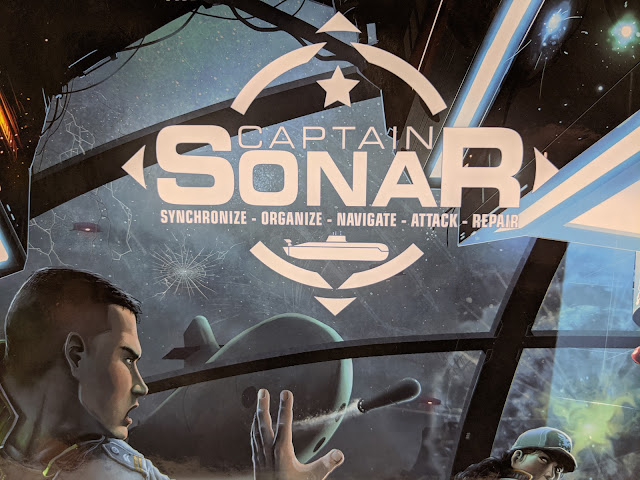 Submarine movies are always tense. Thrills are baked right there into the premise: a team of people in a life-or-death struggle where a thin layer of steel is the only thing between them and the briney depths. Captain Sonar, from Matagot Games, attempts to capture the tension of submarine warfare. It's a head-to-head strategy game in which two teams compete to find and destroy each other that can be played either in turns or in real-time. 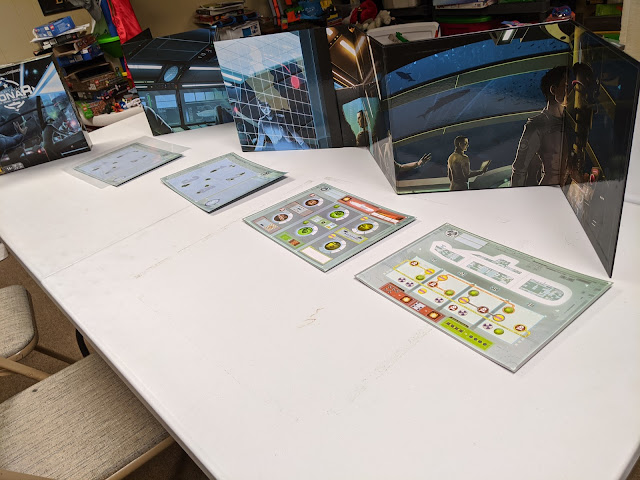 In Captain Sonar, you and your team take on the roles of Captain, First Mate, Engineer, and Radio Operator in a state-of-the-art submarine. You have a chart of the terrain and four hit points, as well as a number of tools at your disposal to aid in the search for your opponent. In terms of gameplay, each crew member has their own mini-game to keep track of while coordinating with the captain to keep systems active and locate the other team. You can play one-on-one (in which case, you take on all of the roles) or divvy roles up across however many team members you have. 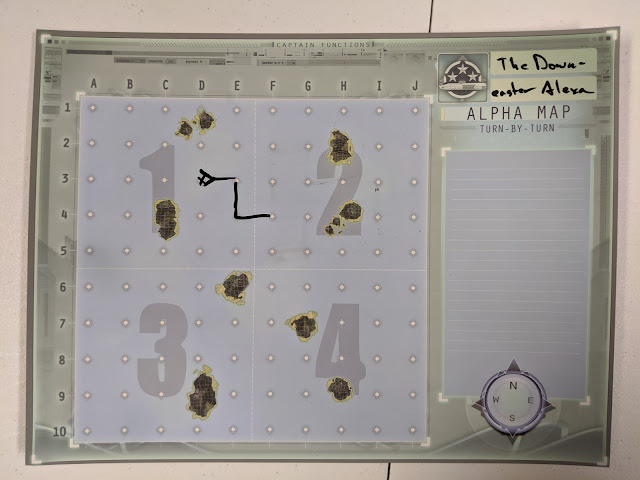 As Captain, you're calling the shots, but the main game you're playing is Snake. You move around the grid avoiding islands and taking care to not cross your own path. You make the decisions about where to go, when to use weapons, when to use sonar, and when to surface so you can recover. 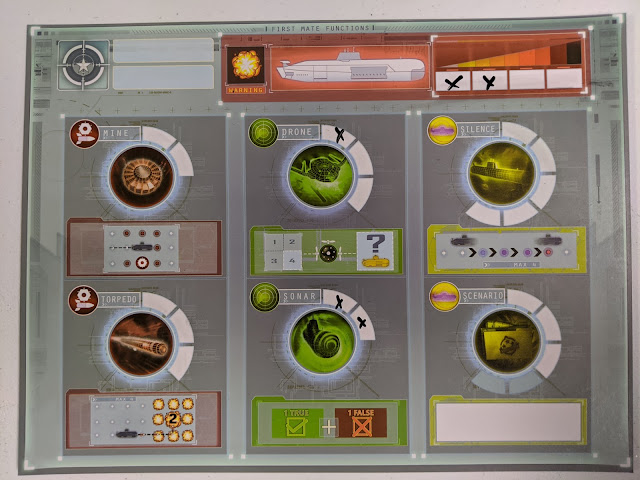 As First Mate, you're in charge of powering up systems and keeping track of damage. Each time the Captain calls out a direction, you add a charge to a system so it will be ready when the Captain asks for it. A drone will force the other team to reveal what sector they're in. Sonar will reveal something about their position. Mines can be deployed for later firing and Torpedos explode up to four moves away. Silence can be used to mask your movement from the Radio Operator, and sometimes the game scenario will include a special system of its own. 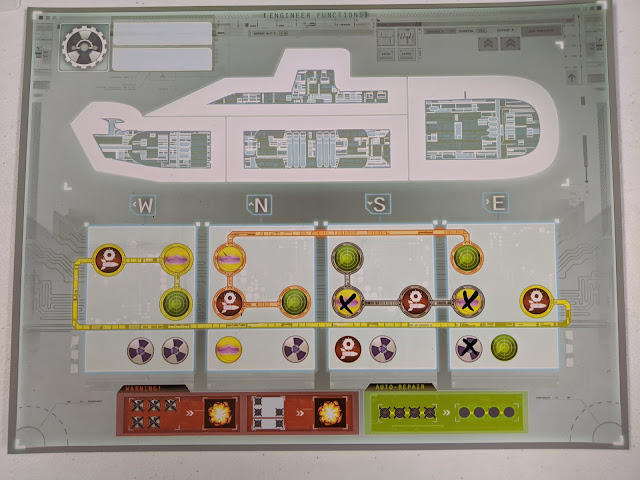 As Engineer, you're in charge of keeping systems alive. Every move the sub makes does wear to a system, and as long as any part of it is worn, it's offline. But you can reboot the system by taking wear to all of the systems joined by a circuit. In this example, the two "silence" systems are marked off on the gray circuit. If the Captain decides they want to use silence, that system will need to be brought back online. So you would tell the Captain you need to go South twice in order to mark off the sonar/drone and weapons boxes, thereby clearing everything on that circuit. If worse comes to worse, you can take damage to clear panels, or you can have the Captain surface the ship, but doing so is going to give away your position and cost you time. 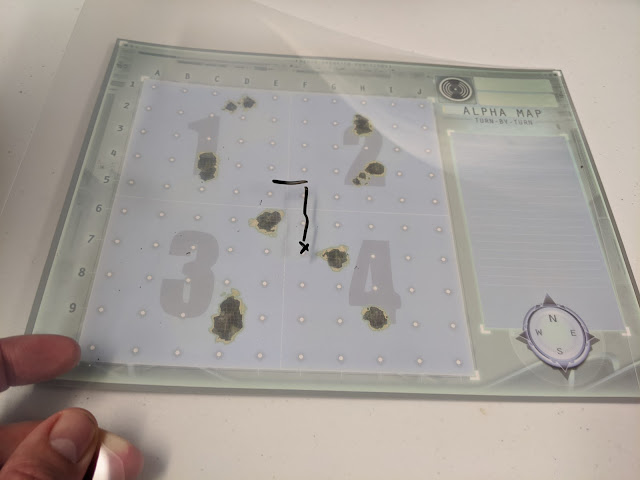 Finally, there's the Radio Operator. In this role, you listen to the opposing team's Captain and mark their path on a transparency which you then try to fit to the map using the shape of their path and any information gleaned from sonar or drones. 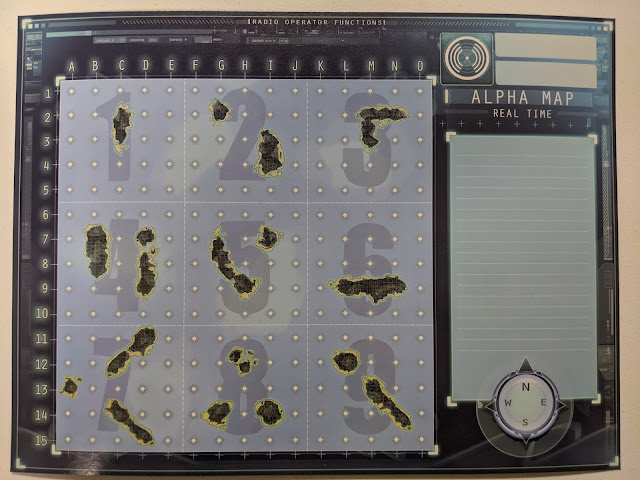 If you're playing for the first time, or playing with only partial teams, you play in a turn-based manner. But the ideal way to play this game is a four-on-four in real time. Real-time uses more complex maps/boards (you can see that the grid is much larger, and indeed all of the player mats have more stuff on them). There are scenarios to mix up gameplay even more, like a map where you're fighting under the ice and can only surface where there's a hole.

Tension, especially in real-time. When you play turn-based, it's nice little puzzle game. But in real-time, it is, without question, the most intense board game I have ever played. The first time I played real-time was a tooth-chattering white-knuckled affair and at the end of it I was amazed that it had only taken eight minutes! So we played again. We played half a dozen times in an hour, mixing up the roles every so often. It was like nothing else I've ever played.

Captain Sonar is largely a social game where teamwork is everything, and as such your experience can be soured if you end up on a team where the human chemistry is working against you. It can be frustrating as well if, for example, you're a Radio Operator playing against a Captain who mumbles. The other problem with this game is that it's just a hard one to get to the table. You need six-or-eight people and a lot of space to really get the experience, and that's not always easy to coordinate.

There are additional map packs available. There's also a stripped-down version made for kids just called Sonar which I have played but don't really recommend.

Captain Sonar gets points for uniqueness and double points for its seriously unreal intensity. I only wish I had more opportunities to play it.

Tune in next week when we defend the kingdom in Castle Panic...
In Acquire-To-Zendo, Kurt is going through his favorite board games in alphabetical order. Read the explainer or see more posts.