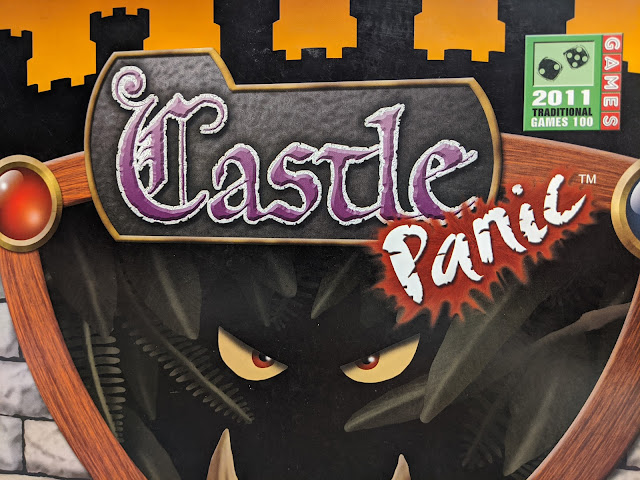 Castle Panic is a semi-cooperative tower defense game set in a pleasant little castle surrounded by mountains, grasslands, marshes, and horrifying monsters. Presently, the castle is under siege by a legion of fantastical creatures and their magical warlords. You have six towers surrounded by six walls, and it's up to you to use your soldiers and fortifications to keep the evil fiends at bay. Walls can be rebuilt, but if the last tower falls, you lose the game. 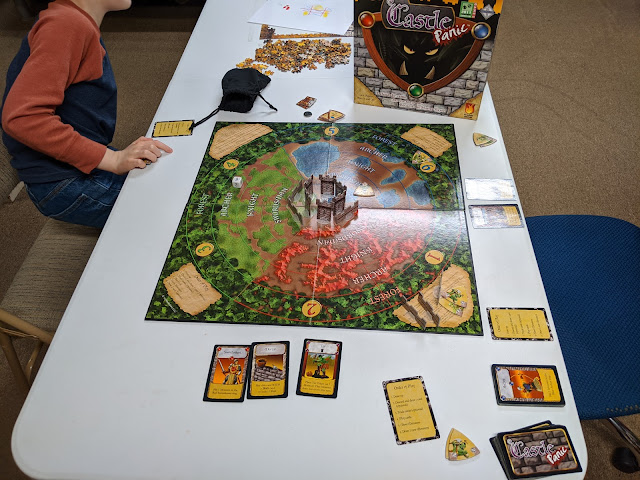 In Castle Panic, you and up to five friends are tasked with defending the eponymous castle from the onslaught of orcs, goblins, and trolls. Every turn, more monsters spawn in the outer forest ring, and everything on the board advances towards the center. Monsters take damage as they destroy walls and towers, but it's much better for all parties concerned (except, I suppose, the monsters), if you take them out before they get there. 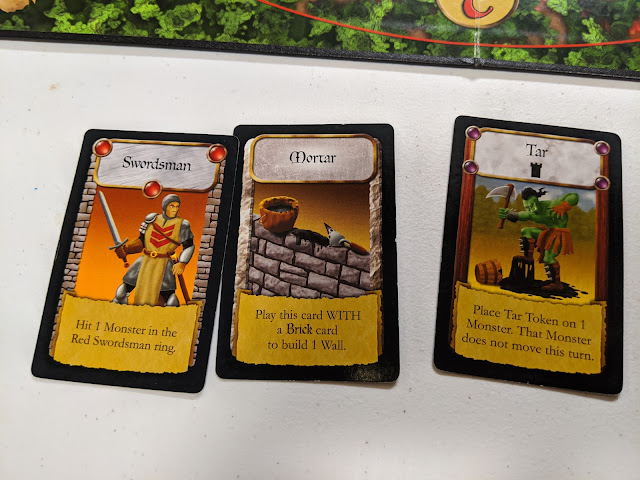 You each have a hand of cards that represent some means of defense. Most of these will be soldiers who can deal one point of damage to one creature in a specific portion of the map. Swordsmen can deal damage in the closest ring, knights in the next ring, and archers in the next. Red, green, and blue soldiers can only attack in their own color. You also have fortification cards that can rebuild or fortify walls. Lastly, there are some specialty cards that will give you some kind of bonus: driving monsters back, preventing them from moving, preventing them from spawning--that sort of thing. 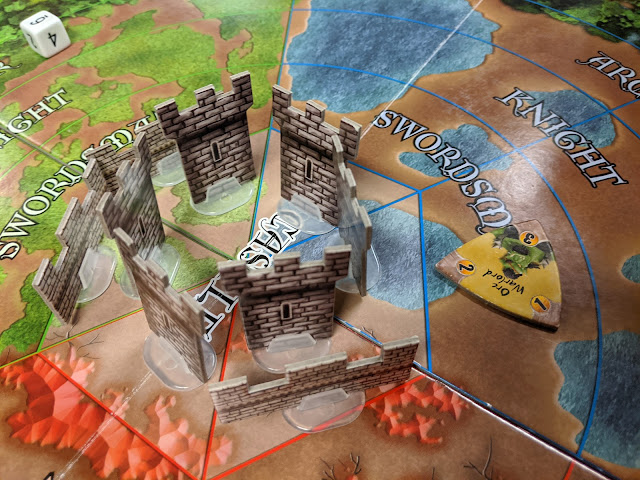 During your turn you draw up to a full hand, and then you have some limited options to cycle or trade cards before playing whatever you can. When you're out of moves, you draw out two more monster tokens and then roll a die to see what section of the forest they spawn in. Not everything in the monster bag is a monster, however. Some of the tokens will make monsters advance or make you draw even more monsters. Sometimes you chain several of these together and then this happens... 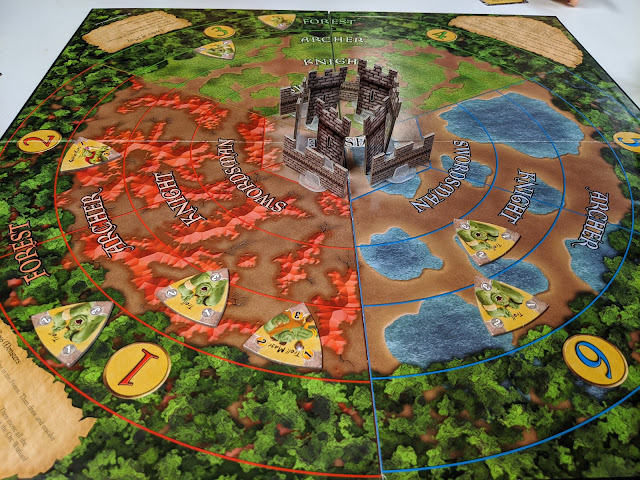 If you make it through all of the monster tokens without losing your last tower, then congratulations, you're victorious. Count up your monsters and see who has the most points and crown them the "Master Slayer". And then take a moment to revel in your shared victory. Or, alternately, you can contemplate the choices you made while taking in the crumbling ruins of your once beautiful home. 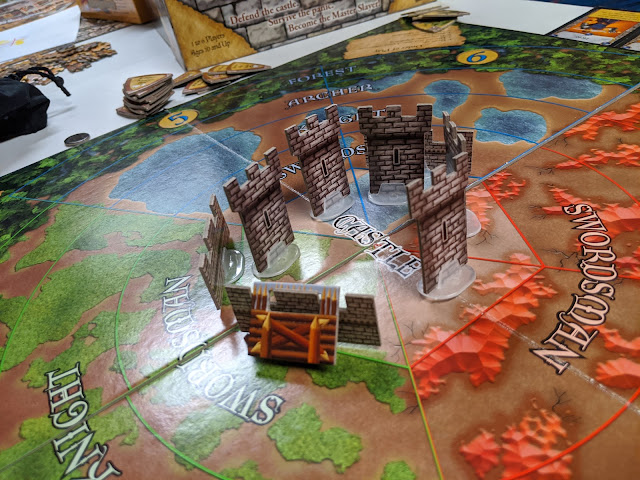 Castle Panic is how I introduced my oldest child to gaming at the age of three, and this worked because it has a pretty good solitaire mode. The symbology on the cards is strong enough that you can play even if you don't have great reading comprehension (you know, like a three-year-old). The theme is fun but not scary. The game is tense, but not overwhelming. And from there it's an easy transition from playing collaborative solitaire with a three or four-year-old to friendly co-op with a five-year-old.

It's also a well-tuned game. With a co-op scenario where you're playing against the game itself, the ideal situation is one where you feel like you're about to lose but then pull out a miraculous victory. And the game is pretty good at engineering that situation. Boulders, for example, will roll through the board and take out a building. But it also takes out any monsters that are in line to attack it, so if you're getting swamped, a boulder can be a nick-of-time save. Because cards are so specific to what they can target, you find that you have a lot more options if you're surrounded, whereas if there are only one or two enemies on the board, you don't have good options to cycle your hand. There are a few tokens that force you to discard, which can be a blessing in disguise if you're trying to dive for a useful card.

Because you're pitting your randomized-by-card-shuffling defenses against a randomized-by-token-draw onslaught, you can occasionally just get a terrible run of luck that makes the game seem incredibly unfair.

There's quite a bit of content out there. There are three individual expansions--Engines Of War, The Wizard Tower, and The Dark Titan--which have all now been collected with the base game in Castle Panic: The Big Box. There are a few spin-offs as well: My First Castle Panic for children, Munchkin Panic, Star Trek Panic, and Dead Panic.

This is a great family game. It's complex enough to keep players of different levels engaged, but simple enough that a young kid can feel like they're contributing. The competitive element can be removed completely and still leave you with a satisfying experience. There's a delay between when monsters spawn and when you can actually attack them, which creates a nice sense of tension, and it's incredibly satisfying to break the onslaught of the hoard only a few turns after you were sure you were doomed.

Tune in next week when we trade and ship spices in Century: Eastern Wonders...
In Acquire-To-Zendo, Kurt is going through his favorite board games in alphabetical order. Read the explainer or see more posts.