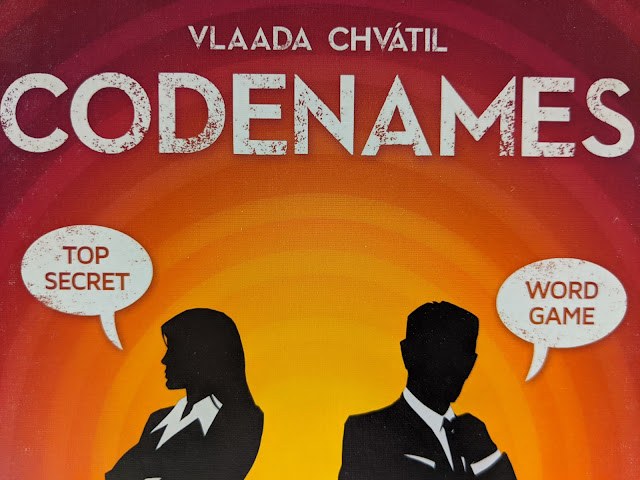 It was a dark and stormy night. You're on your way to make contact with an informant. Your spymaster has given you a clue about your contact, and you're pretty sure you interpreted it correctly. You tap the strange person on the shoulder and then they turn around and stab you! You are dead.

Or... possibly... you've been playing Codenames from Czech Games, the number one party game on Board Game Geek, according to the box. (It's recently been surpassed by Decrypto, but whatever.) 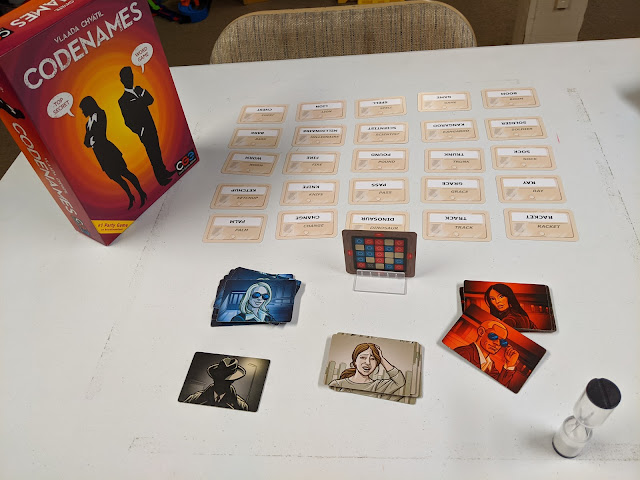 In Codenames, you and between three and a dozen or so friends--RECORD SCRATCH. Okay, real talk here. The game box says 2 to 8+, which is kind of meaningless. There are rules for two or three player games, but realistically the sweet spot is eight to ten people. You can make do with six, and you can still make it work with twelve, but teams of 4-ish to 5-ish is where you want to be. Now, where was I? 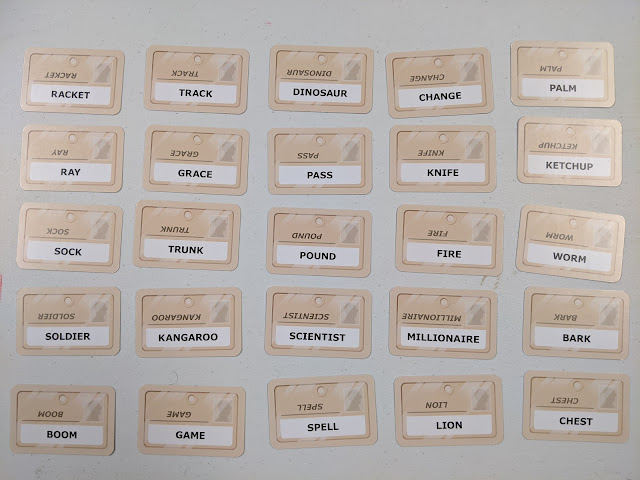 The game board is a grid of twenty-five words. These words represent people. Some of them are secret agents for the red team, some for the blue team. Some are innocent bystanders and one is an assassin. Do yourself a favor and avoid the assassin. 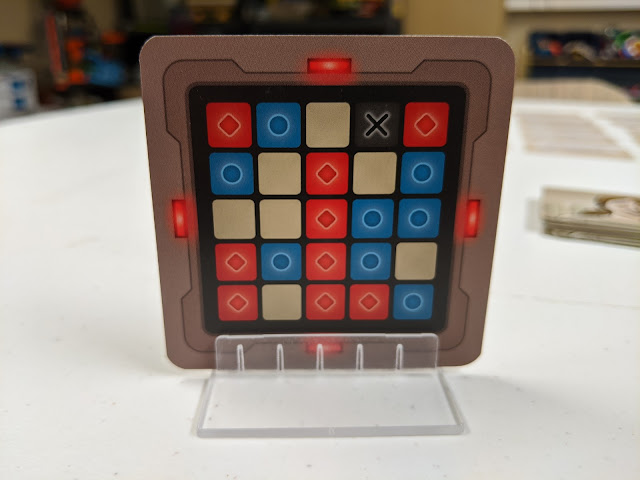 Each teams chooses a spymaster. The spymasters have the key that tells them the identity of each person on the game board. In turns, they give their teams a clue to the identity of their team's agents. A clue is one word and one number. The clue-word relates to the meaning of the words on the board, and the clue-number is the number of cards that the clue-word is meant to relate to. For instance, the red spymaster might say "Occupation-2" as a clue for the words soldier and scientist. The rest of the team then discusses what they're going to guess and then makes their guesses. If they're correct, they get to keep going, up to three guesses (the number of guesses = the number in the clue + 1, and they do not have to use them all). Clues can be as specific or vague as the spymaster wishes.  There are a few restrictions: clues have to be in English--assuming you're playing the game in English, of course--and can't be obviously cognate with a word that's on the board. You couldn't use endgame as a clue for game or science as a clue for scientist. You can't rely solely on rhyme either. You couldn't use shame as a clue for game, but you could use blame because "The blame game" is a real thing that people talk about. 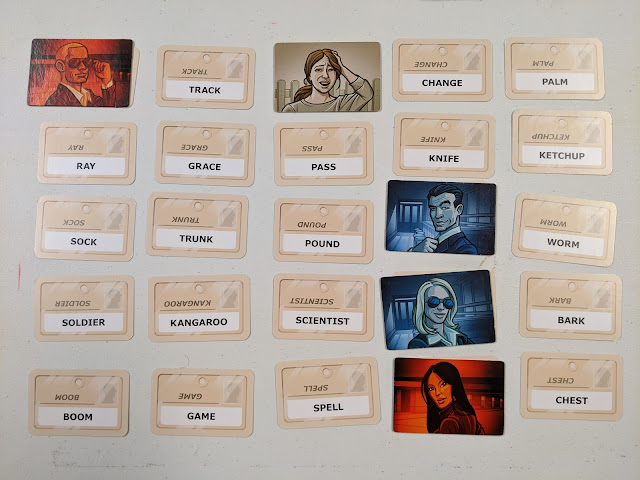 You can get really fancy with the clues if you want to. You could use hand as a clue for palm and pass, using "hand" as both a verb and a noun. You can be ambiguous about homophones. If you give the word see as a clue and someone asks you how it's spelled, you could say S-E-E or S-E-A or you could simply refuse to answer. You can give a clue with a clue-number of 0 if you just want to make sure your teams avoids a specific card. You only want your team to pick your team's color cards. For example, the blue spymaster might use "Trump-2" as a clue for fire and millionaire, but they have to be aware that someone might also pick dinosaur. (Ha! Look at me being all topical and stuff!) If they accidentally choose an innocent bystander, their turn is automatically over. If they choose an agent for the other team--uh-oh, their turn is over and they've just given a point to the other team. And if they choose the assassin, they lose the game. Do yourself a favor and avoid the assassin.

Whichever teams identifies all of their agents first without getting assassinated wins. 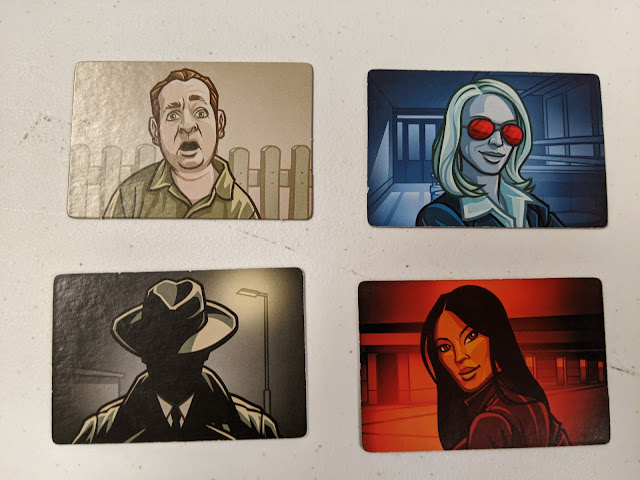 As in real spycraft (probably)...

Party games should be easy to learn, easy to teach, playable at a variety of skill levels (or drunkeness levels), highly re-playable, and they should provoke social interaction. Codenames does all of these things and it's structured in such a way that players can join and drop out in the middle. New players can ease into the game by teaming up with more experienced players. You can bring this out at a party early (and... we often do) as a game that engages people quickly and that you can start before everyone arrives without feeling like people would be left out.

Also, once you get good at it, it's crazy fun. I'm notorious at this game for spymastering very aggressively and saying things like "Hurricane-4" because I genuinely don't worry about bystanders and it kind of freaks people out if they've never played with me before. There are hundreds of dual-sided cards, along with dozens of key-cards, meaning every playthrough is going to present unique challenges.

As with any party game, your experience with it can vary a lot depending on the company you play with. If you have a team that just doesn't get onto the same wavelength very well, it can be a frustrating game. It's also a game that can run long if people aren't playing aggressively. There's a sand timer you can use to prod people along, but no one ever uses it. The box says 15 minutes. That... is a lie. But thirty is very doable.

There aren't any expansions, but there's a lot of Codenames content out there. That's because Codenames isn't so much a game as it is a game engine, so you can swap out a lot of components and still have a coherent gameplaying experience. To wit, shortly after the game debuted, gamers figured out that you can make it a bit more challenging if you replace the word cards with picture cards taken from the game Dixit. 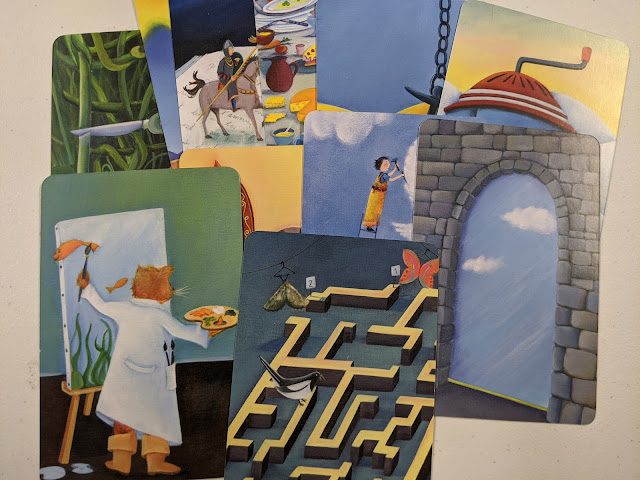 Not surprisingly, shortly after Codenames came Codenames: Pictures, a version that used abstract art instead of words. There are also Disney, Harry Potter, Marvel, and The Simpsons editions that use pictures or a combination of words and pictures, as well as a Deep Undercover edition that uses words that are a bit... er... naughtier. There are large print versions of several to accommodate larger groups and/or people with more difficulty seeing. Finally, there's Codenames: Duet, a two-player competitive version where both people are clue-giver and guesser in alternating turns using two-sided grid cards where they have to uncover spies, only some of which are common. That last one is a lot of fun, and a good way to learn that you and your spouse aren't as innately good at communication as you might have thought.

It was the number one party game on Board Game Geek for a reason. It's fun, easy to pick up, fun to go back to, and a great ice-breaker game.

Tune in next week when we plant some polyominoes in Cottage Garden...
In Acquire-To-Zendo, Kurt is going through his favorite board games in alphabetical order. Read the explainer or see more posts.