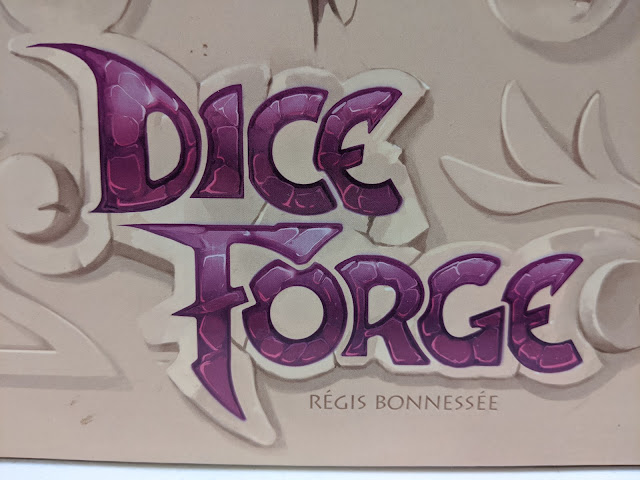 Hear me, brave adventurer! The gods have given you a divine blessing so that you may find honor and glory! How will you prove yourself? Through dedication to the gods? With miraculous feats of strength and courage? Find your path by loading the dice. 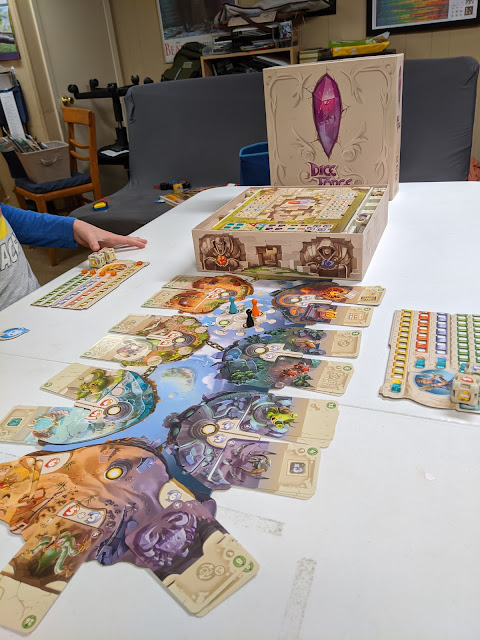 In Dice Forge you and one to three friends take on the role of ancient heroes fighting for fame and glory by petitioning the gods and performing feats of heroism. Each player has two dice and a player board used to track their gold, sun shards, moon shards, and glory points. On every turn, all players roll their dice--an action referred to in-game as "receiving a divine blessing"--and collect the resources shown there. 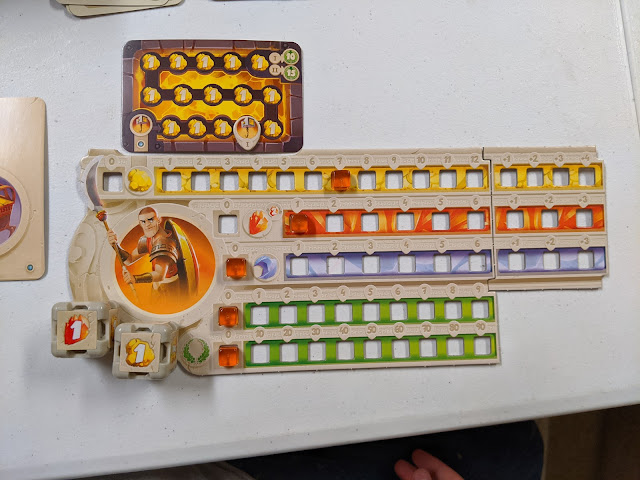 When you become the active player, you spend your resources. Sun or moon shards can be spent performing heroic feats, which means purchasing a card from the display. The card may give you a one-time bonus or a recurring bonus that you collect when you're the active player. Some give you upgrades, like a forge that let's bank gold and turn it into glory points, or an extension to your player board that lets you stockpile more resources. 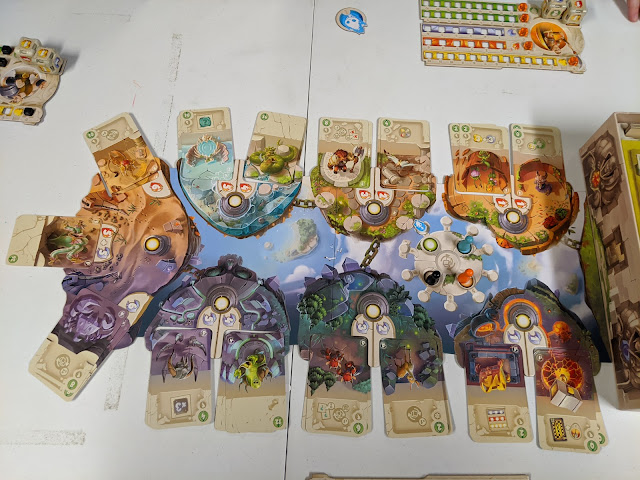 Most cards give you victory points and a handful will let you modify your dice. But if dice-modification is your plan--and it should be, because that's the whole point of the game--then instead of spending your shards, you want to make an offering of gold at the Sanctuary. 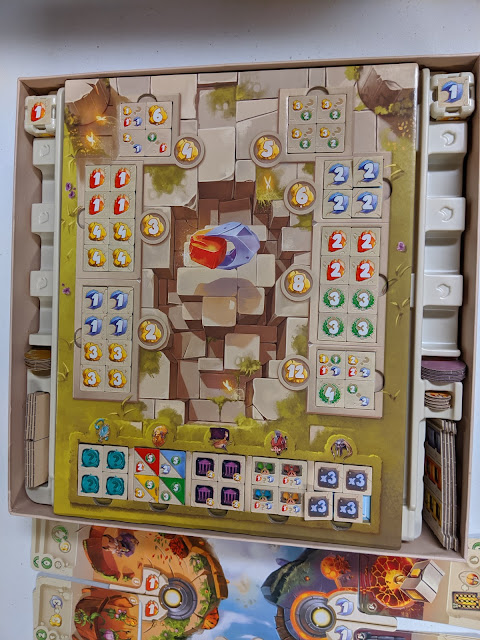 When you spend gold at the Sanctuary, you can purchase a new die face. Then you simply pop out one of the old faces and put the new one in its place. Now the new face has a 1 out of 6 chance of coming up on future die rolls, and you've removed a weaker die face as well. 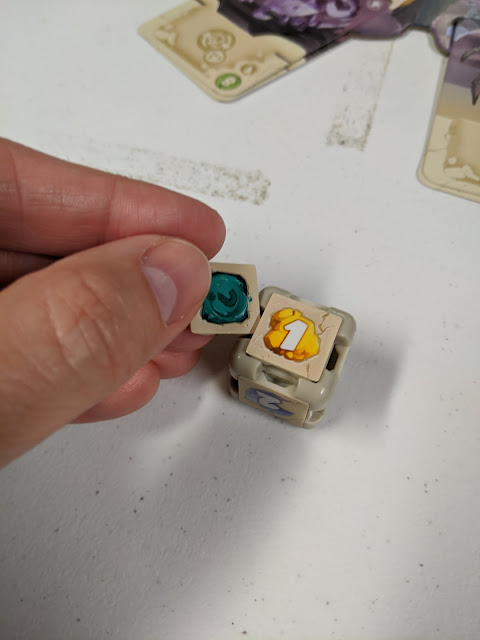 And that's it. That's the gimmick. Your starting dice give you mostly gold, and you spend that in order to upgrade them so you can collect more and more shards so you can you achieve stronger and more rewarding feats of heroism. The game ends after nine or ten rounds (depending on the number of players) and the player with the most glory wins.

Dice Forge poses the question "What if it was a deck-builder but with dice?" and answers it in the affirmative. It's a cool mechanic. I don't generally like dice as randomizers, but this game managed to do something interesting with them that doesn't feel unbalanced. In a way, it plays very much like a tableau-builder, where you upgrade your tableau so dice rolls are giving you better and better rewards. This is an inversion of that. Your tableau stays mostly constant, and it's your dice that you upgrade.

The game is also designed within an inch of its life. The die faces pop out and replace easily but stay in place when you roll them. They've got that magnificent grip that you get from Lego bricks, and the game wouldn't work without it. The card art seamlessly matches the slots on the board where the cards fit. The box is both an extension of the game board and an elegant storage solution. It even comes with storage instructions! 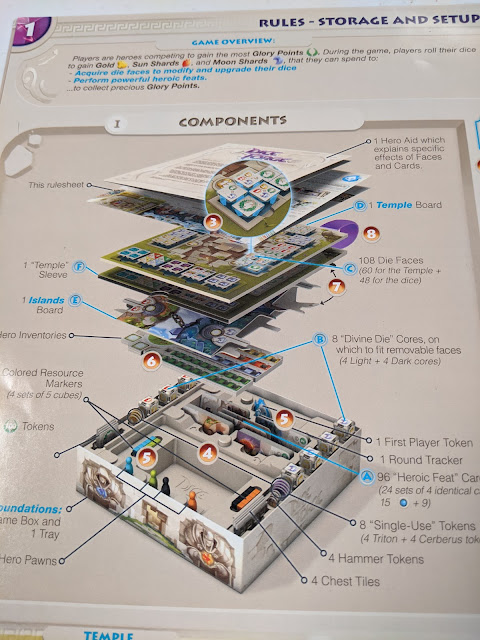 The gameplay is unique and balanced. My 5-year-old picked up the basics in no time. In the spirit of deck- and engine-builders, there are many paths to victory. You can try to stack up one-time bonuses. You can go in hard on dice upgrades early with an aim towards scoring lots of glory during the endgame. You can craft glory faces onto your dice and hope you get lucky. You can create a mechanism to turn gold into glory (a couple of different ways, actually). I like that you roll your dice even when its not your turn, so there's very little downtime during the game.

The biggest complaint I've heard is that there's not enough content. There are exactly two sets of cards for each slot, which just doesn't make the game very replayable. Furthermore, since the card cost is also printed on the game board, you have a lot more restrictions about how you can set up the game. Compare to a deck-builder like Dominion where you can take any ten stacks of any cost and that's your set-up. That's a lot of gameplay variety. Not so with Dice Forge, and even when you do swap cards around, you still have the same Sanctuary set up.

It also suffers from the complaints that plague both engine-builders and deck-builders. First, just when it feels like you're starting to get your engine working, the game ends. Second, there are a lot of bits and bobs, which means it can take a lot of time to set up and tear down the game. Something else I don't care for is a thing I've mentioned in other reviews--I much prefer engine-builders that have a player-triggered end-of-game over a fixed number of turns. That means racing-towards-the-end is a viable strategy, and it adds more strategic depth to the game.

In some ways, the game feels almost over-designed. The concepts are simple, but some of the rules get a little obtuse. And while having rigorously engineered dice makes the core mechanic work, some looser restrictions around everything else could have given the game more breadth.

So far there is one expansion called Dice Forge: Rebellion and if you like the base game, this is worth picking up. It adds more cards for the base game and two new modules with specific cards of their own that add a new dimension to the game. The Labyrinth Of The Goddess adds a pathfinding mechanic that allows you to use die faces for movement across a board that will get you treasures and glory. Revolt Of The Titans adds a morality track element, where you can side with the gods for gold and glory or side with the titans for easier access to heroic feats but take a hit on glory points at the end.

Its reach exceeds its grasp, but there's a lot of awesomeness in this game to make up for the limited setup options and restrictive mechanics. The uniqueness and design are super impressive, and while those aren't really necessary, they really add a lot to the experience.

Tune in next week when we play Balderdash with abstract art in the party game Dixit...
In Acquire-To-Zendo, Kurt is going through his favorite board games in alphabetical order. Read the explainer or see more posts.