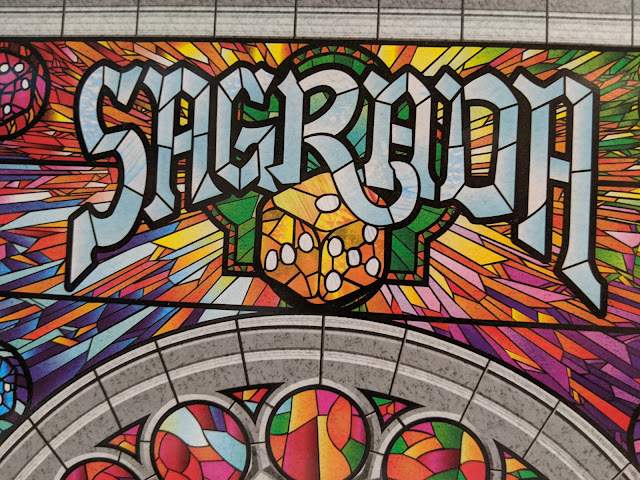 2017, 2-4 players
Complexity: light/moderate
Skilled artisans have traveled to Barcelona to see who among them can build the most beautiful stained-glass windows for the Sagrada Familia. Draft dice that represent shades of glass while you assemble your masterpiece. 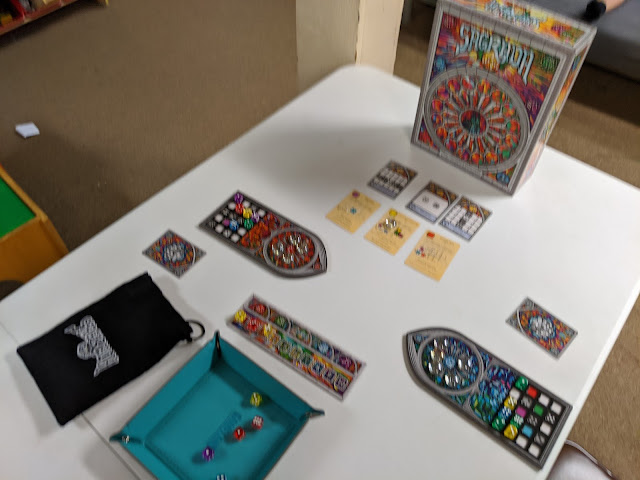 In Sagrada, you and up to three players will compete to assemble the most beautiful stained glass windows by collecting dice over the course of ten rounds. At the start of each round, the active player will roll a number of dice equal to twice the number of players plus one (so, five dice in a two-player game). 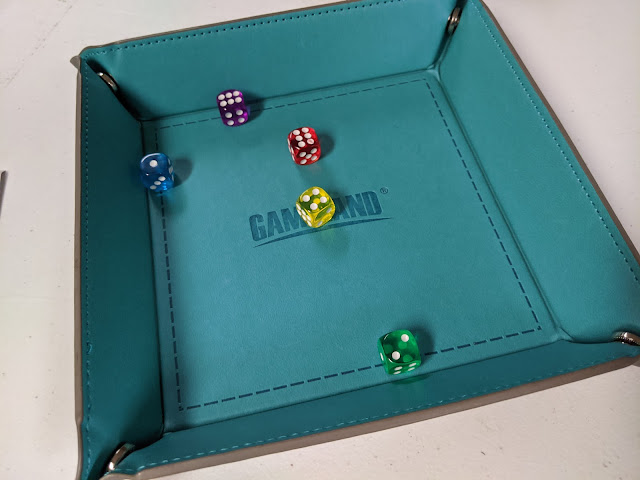 Dice are available in five colors and each face of the die represents a different shade. Once the dice are rolled, the active player takes a die and adds it to their pane in an attempt to fill out the design that they have selected. Each design has dots on the bottom right corner to indicate how difficult it is, and during setup you get that many tokens that can be used later in the game. 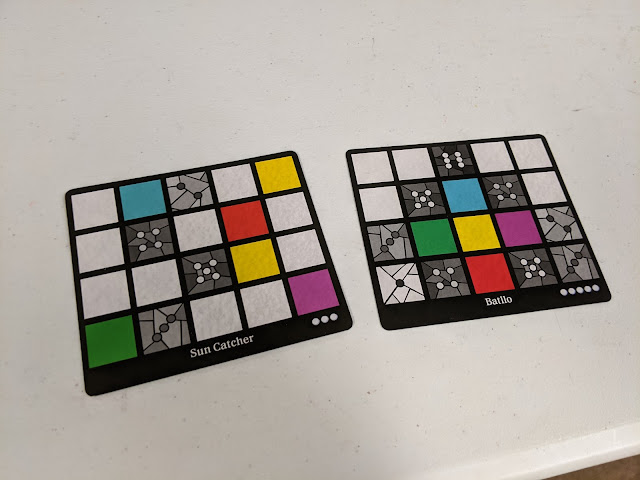 The first die added to your pane must be on a side, and any subsequent die must be touching at least one other die either orthogonal or diagonally. No two orthogonal dice can have the same color or number, though, and you must place dice that match the design you are using. 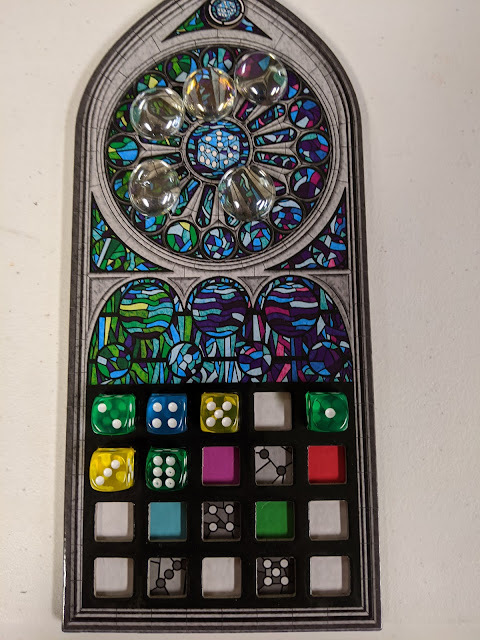 Sometimes (as in the picture above) you can cheat with die placement by spending tokens to use a tool card. These are laid out during setup. The first person to use a tool can do so at a cost of one token. Any subsequent uses cost two. You will also note the objective cards that will be used during final scoring. Any completed row with all unique values will be worth five points. Any pair of ones and twos will be worth two points. Any column with all unique values will be worth four. 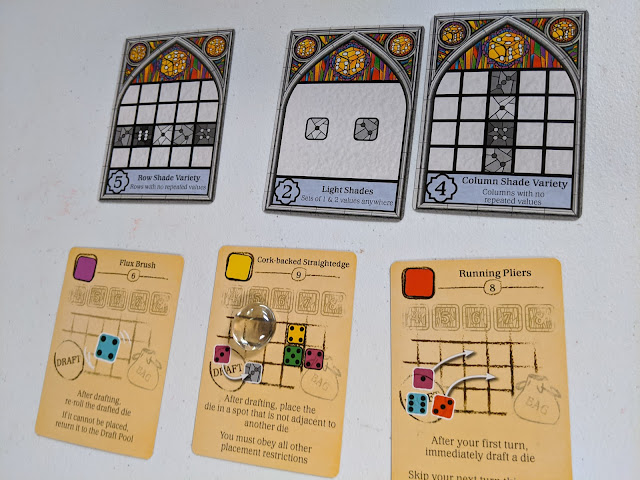 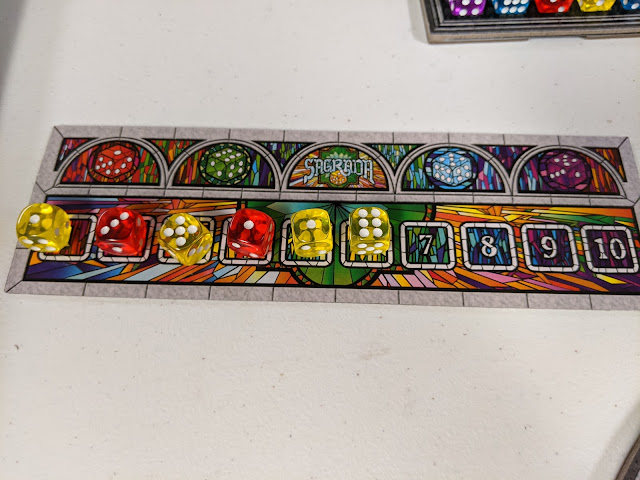 In addition to the public objective cards, each player has a private objective indicating a specific color of die. During final scoring, they will add up the faces of all of the dice of that color and add that total to their score. If a player is ever not able or not willing to take a die, they are skipped. Once the tenth round is over, all players tally up their scores by gaining points for their public and private objectives, plus a bonus for any unused tokens and minus a point for every blank spot in their pane. Whoever has the highest score wins. 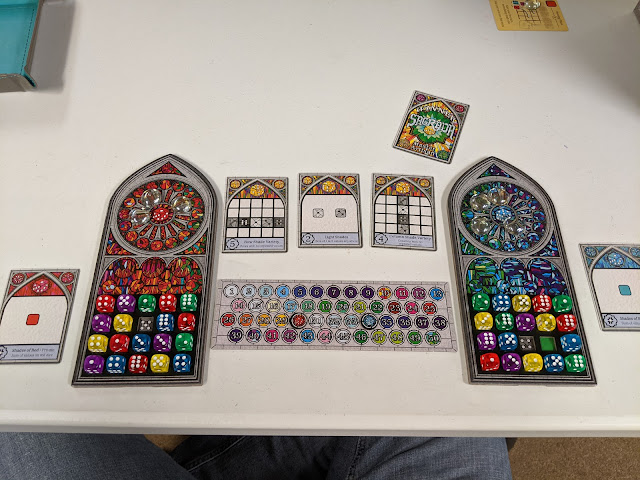 First off, it's a very pretty game. I enjoy drafting, but dice drafting is particularly fraught because--as anyone who plays dice games can tell you--the dice hate you. Dice are little punks. Whatever you need, they will roll something else. So while the rules of this are pretty straightforward, it becomes very tricky in the endgame to try to get the pieces that will be available in the holes you've left yourself. You have to start planning things out early, to make sure you don't end up with four different colors on the border of a hole, leaving you very few options for filling it.
Because of that, it's almost impossible to hate-draft in this game. You have to be looking for what can help you because anything else is going to end up costing you more points. (I won't say that it's completely impossible... or that I've never done it...)
And it plays very quickly. The box says forty minutes, but in my experience, twenty is more typical.

I wish the dice were bigger. I understand why they're not, but it's easy to fumble them and end up changing the face while you try to get dice into empty spaces. There's not a ton of variety for the tool and scoring cards. And I don't love that you do all of the scoring at the end instead of scoring throughout. These are pretty minor, though.

There are a handful of promo cards and two proper expansions. One makes the game playable with six, providing extra panes and dice. Then there's a Passion expansion that adds some cards a new mechanic that will let you swap some dice around.

It's an easy-to-learn dice drafting game that's very pretty and not very mean.
Tune in next week when we build with the gods in Santorini...
In Acquire-To-Zendo, Kurt is going through his favorite board games in alphabetical order. Read the explainer or see more posts.