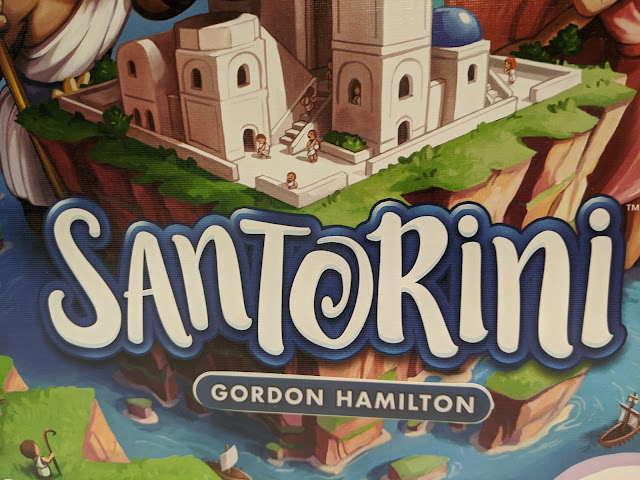 2016, 2 players
Complexity: light
The island of Santorini is a real place in the Cyclades archipelago in the Aegean Sea. It is known for--among other things--the striking architecture consisting of white cuboid buildings that are occasionally capped with blue domes. Game designer Gordon Hamilton drew inspiration from the architecture of the island to develop an abstract strategy game that he eventually self-published in 2004 (although versions of it have been around for over a decade prior to that), and that was recently re-released by Roxley Games. 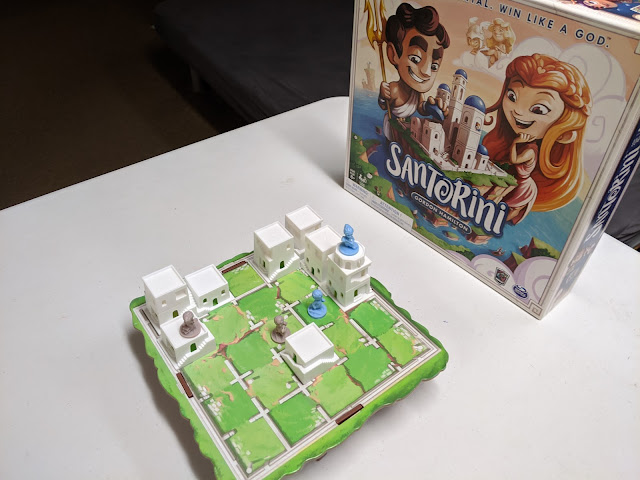 In Santorini, you and a friend (there are rules to make it playable with 3, but I don't recommend doing so--this is at its heart a 2-player game) will take on the roles of ancient Greek builders. The rules are very simple: on your turn, you move one of your two pieces and then build. 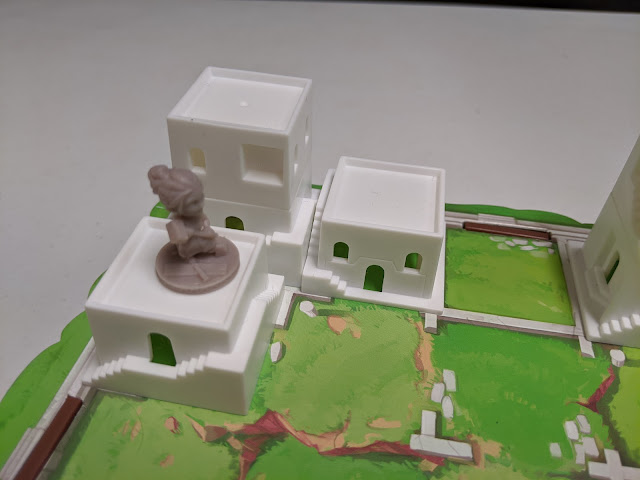 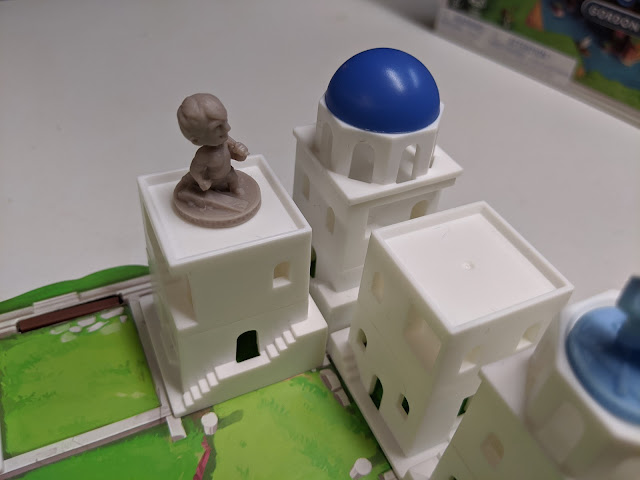 After moving, they build in any adjacent or diagonal square, subject to the same restrictions they had with movement: they can't build under a worker or onto a capped building. There are exactly four levels to every building: a base, a middle, a top, and cap. When you build on a space, you add the next level to it. 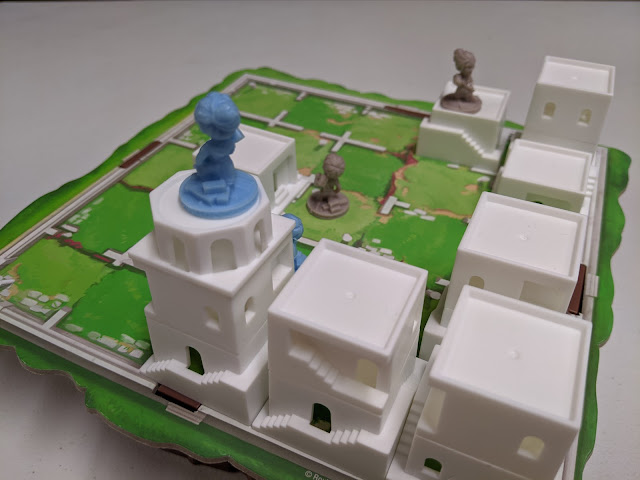 You win by moving one of your builders from the second to the third level. And that's it. It's deceptively simple, but offers a great deal of strategic depth. 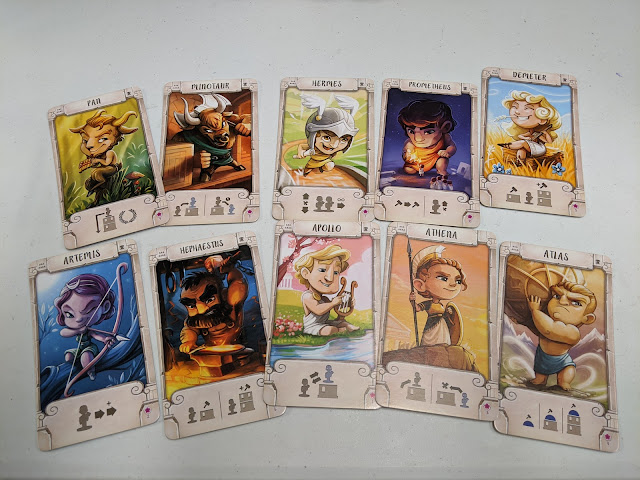 Once you get the hang of the basic game, there are God cards that add complexity. One player picks two, and the other chooses which they want to be. Atlas can build a cap on any level. Apollo can swap with another worker. Hermes can move any number of spaces as long as he doesn't change levels. In addition to the ten "basic" God cards there are a number of "advanced" cards that make things even more complex. Chronus wins if there are ever five buildings with caps on them. Chaos shifts through the basic God cards, so his power is constantly changing. 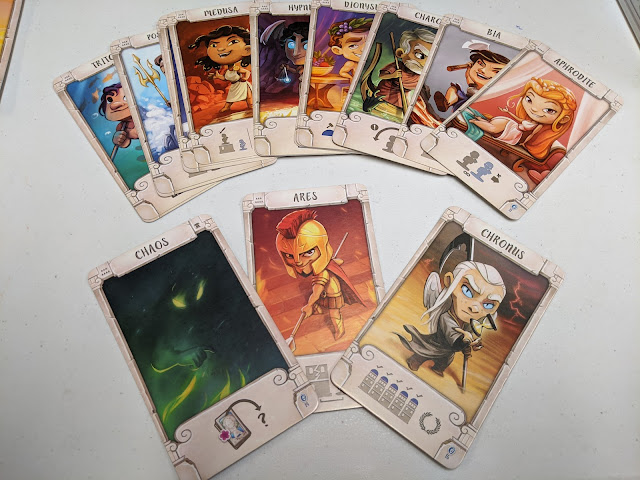 Build your buildings, block your opponent, and stand on the third level to claim your victory.

As I mentioned in the Onitama post, a love a good abstract strategy game and Santorini is a great one. The rules are exquisitely simple, but there is a ton of strategic depth. You can build from the ground, so if you have a worker high up on the second level trying to build third levels to ascend to, they can be blocked by a worker on the ground who caps them. You have to find ways to squeeze the opponent's builders out of your area, which is easy enough to do with two, but if you leave your opponent alone entirely, then they can race to the victory themselves.
The God cards add some nice variety, for people who get bored of plain old abstract strategy. Although, honestly, I prefer the game without them.

Okay, I have some quibbles from a production aspect. The basic board and pieces are great. But! The builders come in three colors: light blue, light gray, and dark gray. They need to be more distinct, especially in a 3-player game (which you should never play, by the way). The iconography on the cards isn't very clear. You always end up having to go back to the rules sheet to remember what the different cards do. I'm not a huge fan of the cards anyway, as I mentioned above. They feel a little unbalanced and a little too random for my taste, and they rely on a weird "I pick the pair, then you pick your card" mechanic to try to force some balance on them.

There's a Golden Fleece expansion that adds a new batch of God cards that get into hidden movement and all kinds of crazy complexity. They also include the Golden Fleece, which is a totem that goes in the middle of the board and provides a communal God card power to anyone who has a worker adjacent to it. Honestly, it feels a little overwrought to me, and it doesn't include rules! This was originally Kickstarted, and all rule sheets included rules for the expansion content as well. But recent reprintings of the base game only have the rules for the base game, which can be weirdly frustrating if you buy the expansion and then realize you have to go online to figure out how to play it.
Also, there is a forthcoming Santorini New York edition that uses a non-square board and some different pieces.

I played this in a tournament in 2018 (I think) and knew immediately that I needed to own it. And then spent months trying to track down a copy. And I'm glad I did, it's a favorite--although my kids always want to play with the crazy rules rather than enjoy the pure abstract strategic goodness of the the regular cardless game. Anyway. It's another chess-like game, and if that's your jam, then this is a must-own.
Tune in next week for some weird trick-taking in Schneeble...
In Acquire-To-Zendo, Kurt is going through his favorite board games in alphabetical order. Read the explainer or see more posts.