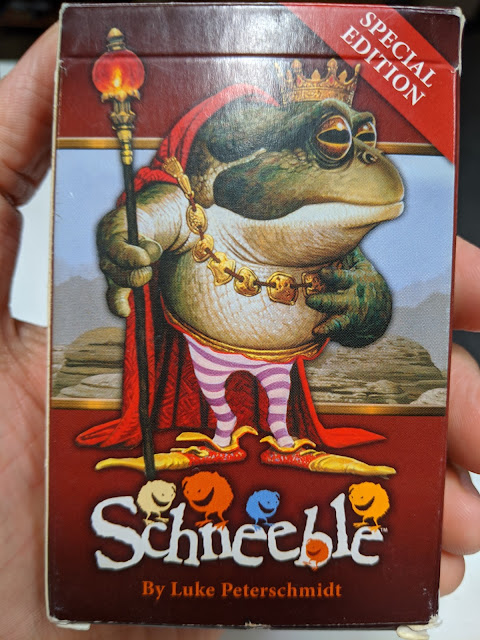 2017, 3-5 players
Complexity: light
I love trick-taking games. I grew up playing Spades at church camp and Hearts on the computer. I never learned Contract Bridge, but I bet I'd be into it. (Serious aside--at what point are Bridge players going to come up with a new word for "trump"? Because that needs to happen.) I hardly ever get to play them because they typically need four players, but I have an assortment, and this is my favorite. 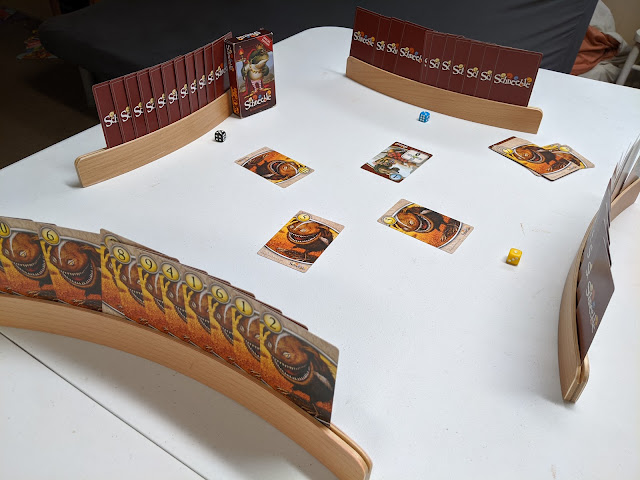 Schneeble is a suitless trick-taking game for four players (it includes rules for three and five, but it is ideally played with four) that has cards numbered from 1 to 10. What makes this different from other trick-taking games? Three things. The first is the idea of bumping. There are no suits in Schneeble, so anyone can play any card out of their hand, which allows for ties. When two (or more) players play the same number, those cards are "bumped" which means they are no longer considered when determining the high cards. So, in the picture below, the tens cancel each other out and the five would win the trick. 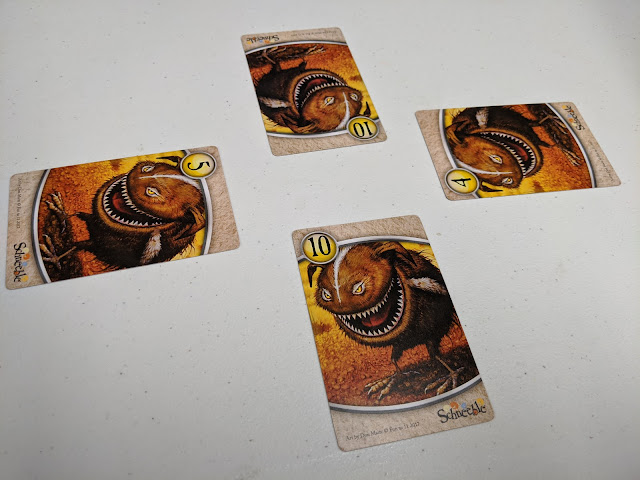 The next difference is in the six special cards that alter the rules whenever they come out. Clockwise from the top they are: 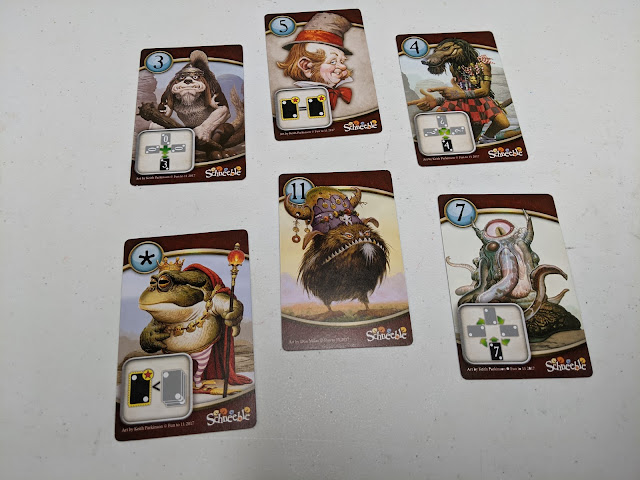 The final thing that makes this different from other trick-taking games is in the way you determine your bid. Similarly to Spades, you are trying to target a trick count, but unlike Spades, you don't have any say over what it is. Each player rolls a die and tries to hit that target. For each trick you take above or below that target, you gain a point. You don't want points. Points are bad. 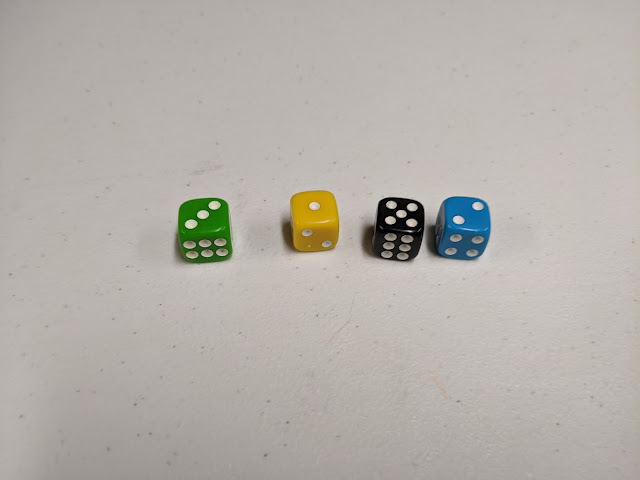 Points accumulate round over round. Once a player has 10, the game ends, and the person with the lowest score wins.

I mean, for me, the biggest plus of this game is that it's just a really good trick-taking game that's different enough from Spades and Hearts to feel fresh. The dice give it a little more challenge and randomness. The special cards give you other things to think about than just how to slough cards you don't want or get more mileage out of the cards you have. I also love the art. It's weird, but I dig it.

Well, if you don't like trick-taking games, this one isn't going to win you over. And it really does play best with four, so finding the right mix of players can be, ahem, tricky. It has what feels like a higher degree of randomization than most Bridge-style games, and that's going to either be a feature or a bug for you.
I have a couple of gripes about the special cards. While I love the art, I don't find the iconography on them to be very useful. This is a case where just writing the rule down would have been more helpful (although I realize that complicates things from an internationalization perspective). And the names of the cards--which don't appear anywhere on the cards themselves--are so off-beat that they're difficult to remember. I mean what the hell even is a sloarch?
But my biggest complaint about this game is that it's not going to be easy to acquire. I don't think it was ever distributed to stores. The publisher has disbanded in the last month (really!) so it's going to be even harder to find going forward unless someone else picks it up--which could realistically happen. The designer, Luke Peterschmidt, is working for AEG now, so I could see Schneeble showing up as a Kickstarter add-on or finding its way into one of their Black Box collections if they start doing those again. And AEG have historically been pretty friendly to small-box games in the past, although less so in recent years. Schneeble is also available as a free module for Tabletop Simulator, but I don't know how robust that module is, or if it's being maintained.

Nope. Nor should it ever be.

If you like trick-taking games, this is a fresh one! If you can get your hands on a copy.
Tune in next week when we save the multiverse from evil in Sentinels Of The Multiverse...
In Acquire-To-Zendo, Kurt is going through his favorite board games in alphabetical order. Read the explainer or see more posts.