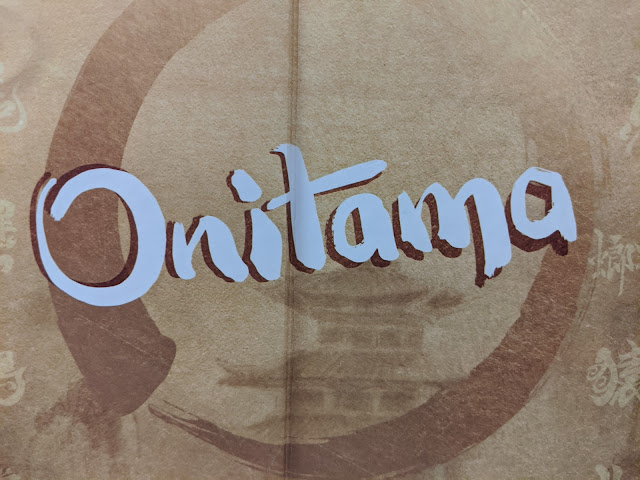 2014, 2 players
Complexity: light/moderate
In Ancient Japan lies the Shrine of Onitama, a sacred place devoted to the spirits of martial arts. Masters will journey there along with their most promising disciples in order to test their strength against each other and determine who has true martial arts superiority.
(And yes, I realize Kung Fu Chinese, not Japanese, but the song reference was too good to pass up) 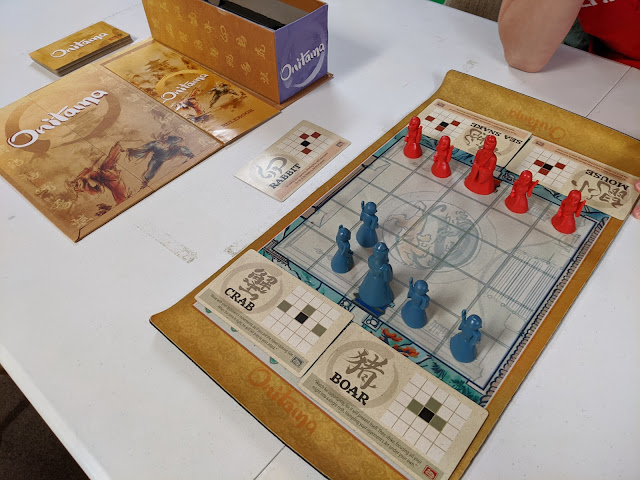 Onitama is an abstract strategy game in which you and a friend will maneuver your pieces around a 5x5 grid using a common pool of moves that are drawn randomly during set-up. 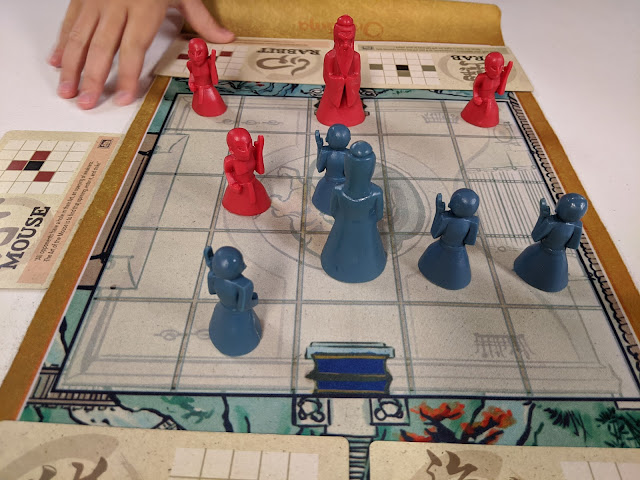 The basic mechanics are similar to chess. You can move any piece on your turn. Any piece can capture any opposing player's piece by landing on a square that is occupied. You cannot capture your own pieces. The big difference is that in chess every type of piece has a pre-defined move set. In Onitama, any piece can make any move as long as the player possesses the card that allows it. 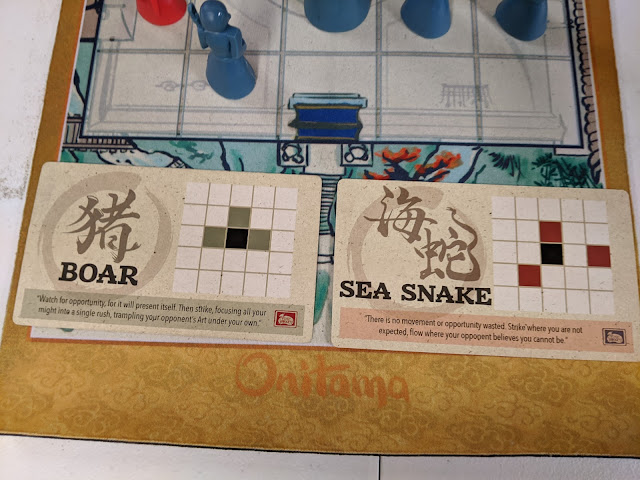 There are five movement cards in the game: two per player and one that is "on deck" for the player whose turn it is. Each card identifies the three or four spaces that a piece can move to. For example, the Boar card will allow you to move any piece one space forward, left, or right. In order to make a move, you must discard one of your cards that allows it. You replace the discarded card with the "on deck" card, and your discard becomes the "on deck" card for the next player. All cards are always visible, so you know what moves are available to everyone at all times. 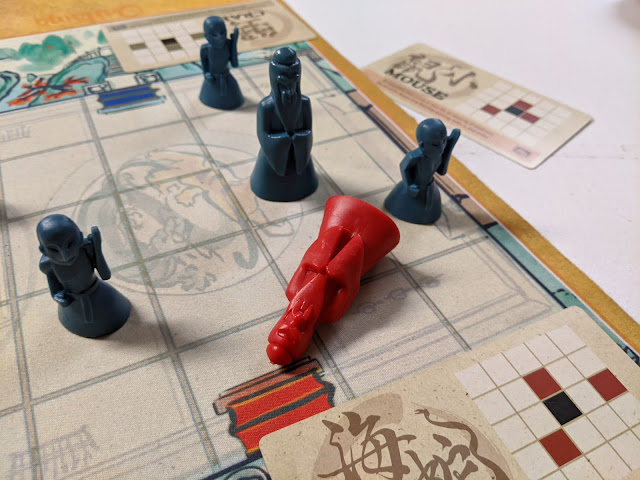 You win by either capturing the opponent's master or by moving your master to the center space in the opponent's back rank. And then you offer a rematch, because it's a short game.

I love a game that's easy to learn but difficult to master. I've talked about this with euro-games, but it's a hallmark of a good abstract strategy game as well. I love it when you are able to grok all the rules in a minute or two, and then spend playthrough after playthrough honing your strategy. And despite this game's simplicity and smallness, there's a lot of depth here. Certain cards are going to be more favorable to different strategies. Should you hold them back to deny your opponent access to them? Should you go after pieces or play defensively? How aggressive should you be in advancing your Master towards the opposing side's home square? That's a much harder victory to block, but pursuing it puts your Master at greater risk, which could cost you the game.
The fact that the composition of move-sets shifts every turn makes you play more reactively because you can't anticipate what the board will be like more than two moves ahead. But you have to try to plan ahead anyway. It makes for a game that's chess-like but with smaller puzzles that you have to solve again and again turn after turn. It's a tight, rewarding game.

Sometimes you get a weird combination of cards that favor one type of movement over others. If most of the cards have leftward movement, you can end up with each player playing a very one-sided game, but in opposite directions. Those can be a little frustrating. Also, don't play this game if you don't like abstract strategy. I watched a couple play this as a con once, and half of that couple didn't care for abstract strategy games, and by the end of the game I was starting to wonder if they were going to break up with each other before finishing. (Good news: the relationship survived.)

There are two expansions. First is Sensei's Path, which doubles the number of cards in the game and is absolutely worth picking up if you like the base game (it also includes the Turtle and Phoenix cards which were originally released as promos). The second is Way Of The Wind which adds a new pawn that moves separately and swaps pieces around. It's fine, but it makes the game more unpredictable and that's not really what I want from an abstract strategy game.

It's a great thinky game that's highly accessible and chess-like but with a bit more variety and tighter gameplay than chess.
Tune in next week when we roll up the usual suspects in Private Die...
In Acquire-To-Zendo, Kurt is going through his favorite board games in alphabetical order. Read the explainer or see more posts.