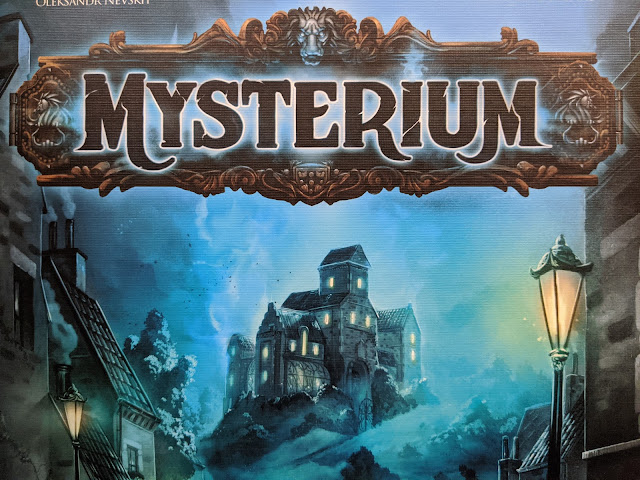 2015, 2-7 players
Complexity: light/moderate
The old MacDowell house is haunted. Tonight, and tonight alone, the supernatural presence can interact with people. And so a group of talented psychic detectives have been gathered to the spooky old haunted house in order to be brutally murdered one by one solve the mystery of who killed the ghost that haunts Chez MacDowell. At the intersection of Dixit and Clue lies Mysterium. 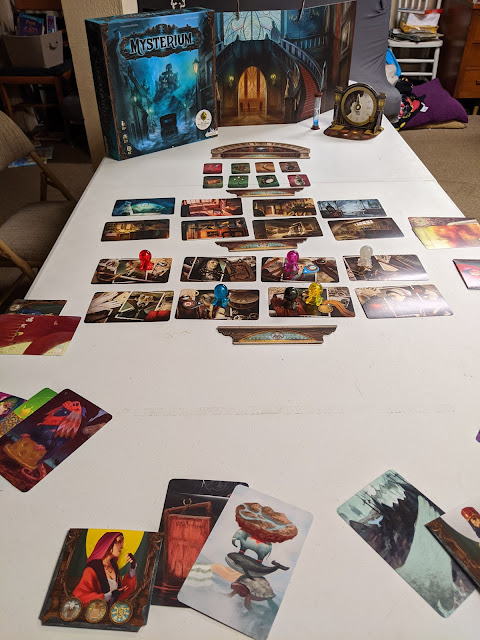 In Mysterium, you and up to six friends will work together to solve the mystery of who killed the ghost that haunts the old MacDowell place. One player is the ghost and will hand out clues to the other players. Over the course of seven rounds, the players will use the clues to try to suss out the identity, location, and weapon of the murder. 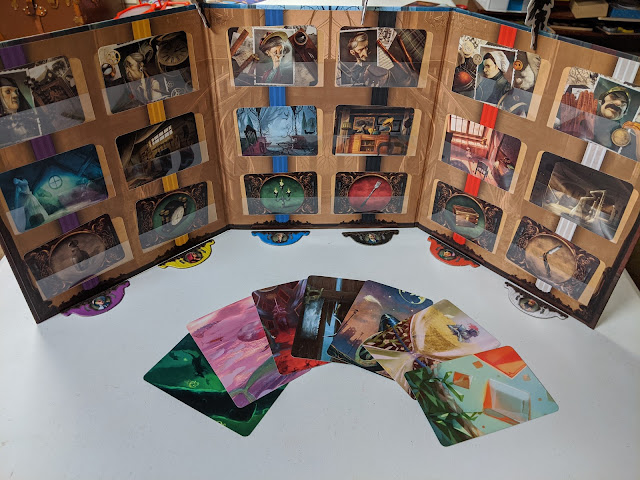 The ghost player knows all and can say nothing. They have a killer/location/weapon combination for every player and a hand of abstract cards that they will distribute to the other players in order to share that information, starting with the identity of the killer. 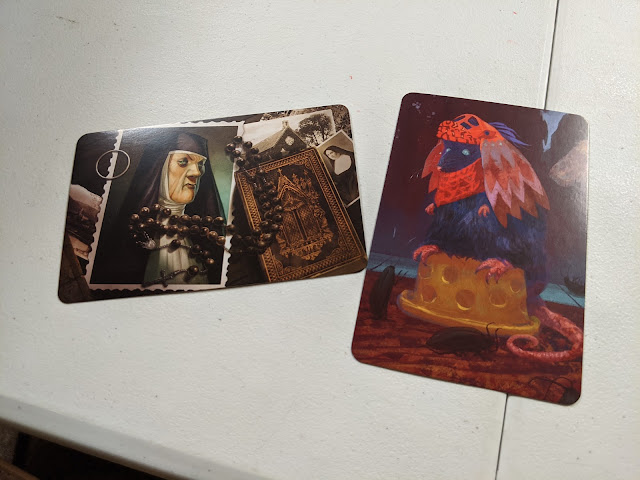 The cards are pretty vague, so you have to be creative with how you interpret them. For instance, the card on the right shows a rat wearing something that looks like a cowl. So it could be a clue for the murderous nun. But the rat is standing on a block of cheese, so maybe it's a clue for murderous pastry chef! Sometimes you're trying to match objects, sometimes shapes, sometimes just overall color palette. 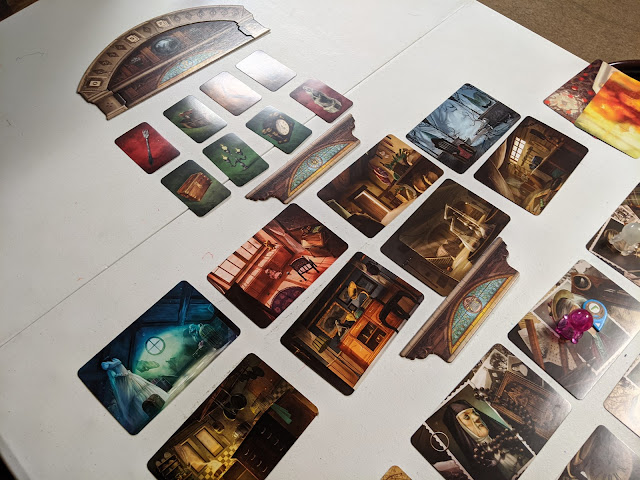 After they've gotten their cards, the players will move their token to the killer/location/weapon that they think they're being clued into (and it always goes in that order--you can't guess your location until you've already correctly guessed your killer). 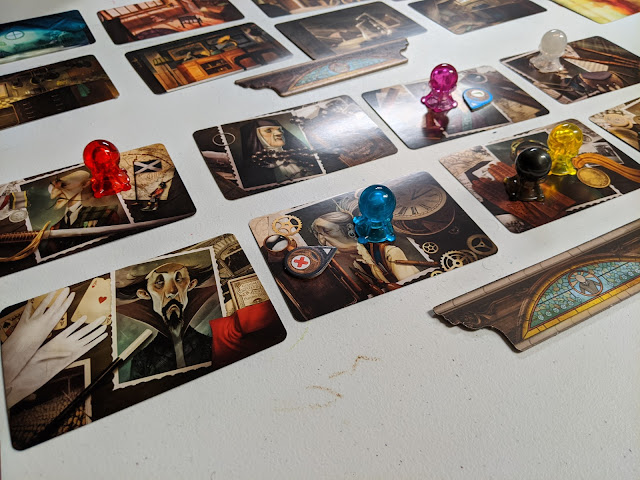 Players also have intuition tokens they can use to agree or disagree with other people's guesses. In the above example, blue thinks purple has guessed right, but black thinks blue has guessed wrong. If you have second-guessed correctly, you advance along the intuition track. 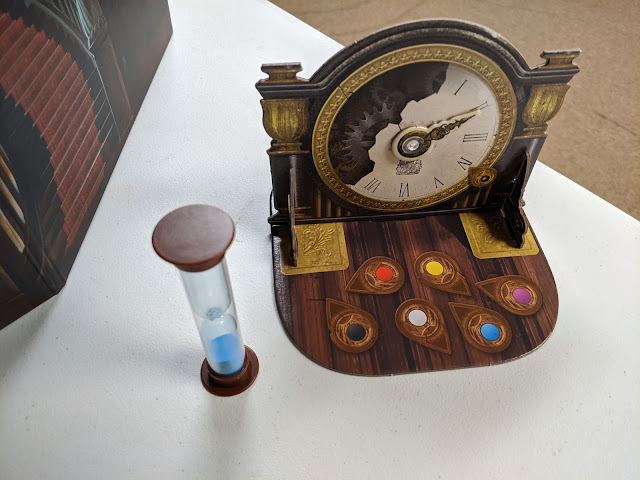 At the end of the round, the clock advances one hour and the ghost gives out new cards. At the end of seven rounds, any players who have correctly identified their killer/location/weapon combination advance to the final round. 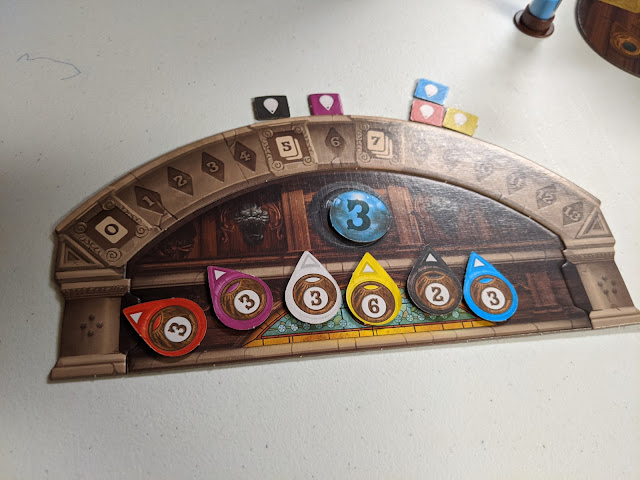 In the final round, the ghost selects one combination of killer/location/weapon to represent the "real" version of the murder. The ghost then chooses three cards, one representing the killer, one representing the location, and one representing the weapon. Those cards are then revealed (at random) and players use tokens to silently vote on which combination is correct. The number of cards you get to see depends on your place on the intuition track. If the majority of players vote for the correct killer, everyone wins. 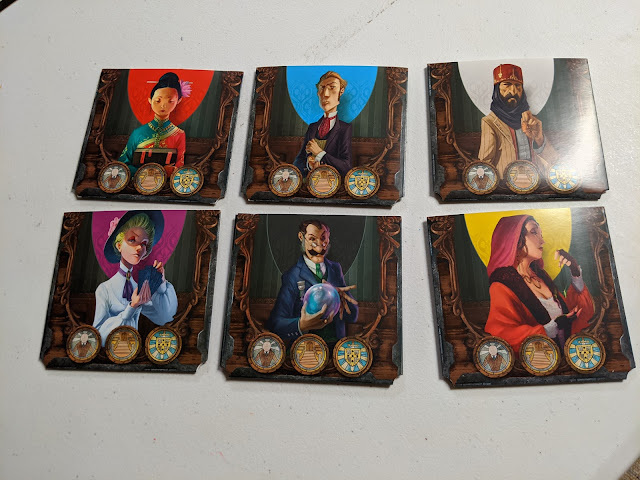 Mysterium does a great job of turning theme into gameplay and taking gameplay that's otherwise obtuse and making it work anyway. The fact that it's cooperative means that players can help each other out. There's a built-in catch-up mechanic whereby a player who is falling behind sees their choices getting easier simply because cards are removed from the board when other players guess them correctly. The intuition tokens make for nice little high-five cooperation or told-you-so moments, but the fact that you have to use them in order to be properly set up for the endgame means that they don't feel mean-spirited (even when they are totally mean-spirited).

It doesn't play all that well with smaller groups. There are rules for two and three player games, but it's a lot more fun with six or seven. On the other hand, getting a group that large together usually involves a party of some kind, and having a party where one of the players is simply not allowed to talk isn't a lot of fun for them.

There are two expansions, aside from the requisite handful of promos. Hidden Signs adds more character, location, and weapon cards. Secrets & Lies includes more of those but it also adds Story cards. With those, the detectives are tasked with figuring out why the ghost was killed in addition to how. I haven't played either of them, but they're well-regarded.

Here's my obligatory mention that I don't believe in psychics or ghosts in real life, but as a game mechanic, it's fun. I like logic puzzles and detective games, and the theme allows for the mystery to be built entirely out of abstract parts. A lot of detective games suffer because it's hard to use random elements to build a cohesive narrative, but in Mysterium it doesn't have to be cohesive, and that's what makes it work.
Tune in next week when we something something harvest something something Druids in Mystic Vale...
In Acquire-To-Zendo, Kurt is going through his favorite board games in alphabetical order. Read the explainer or see more posts.