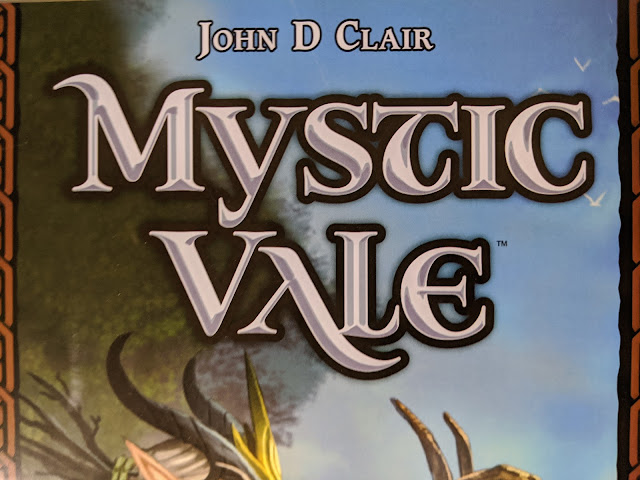 2016, 2-4 players
Complexity: moderate
Let's be clear about one thing up front: Mystic Vale is first and foremost a gimmick. It's built around a "card-crafting" system created by John D. Clair wherein you are acquiring cards through the usual deck-builder means, but instead of adding them to your deck, you sleeve them into individual cards in that are already in your deck. The result is something fairly original: a fixed-deck deck-builder. 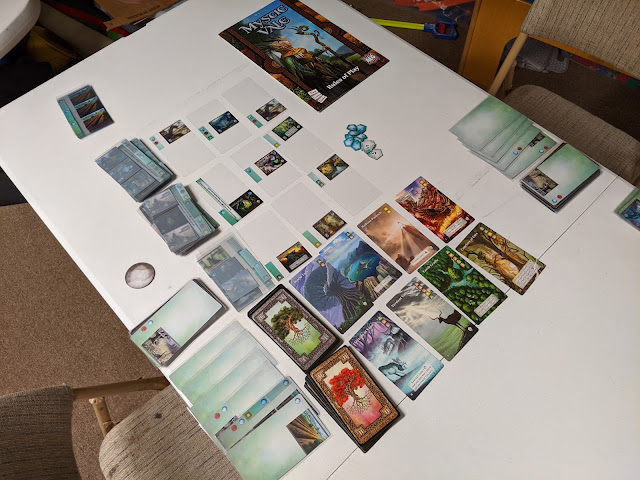 In Mystic Vale, you and one to three friends are Druidic clans attempting to cleanse the vale of rot and decay. 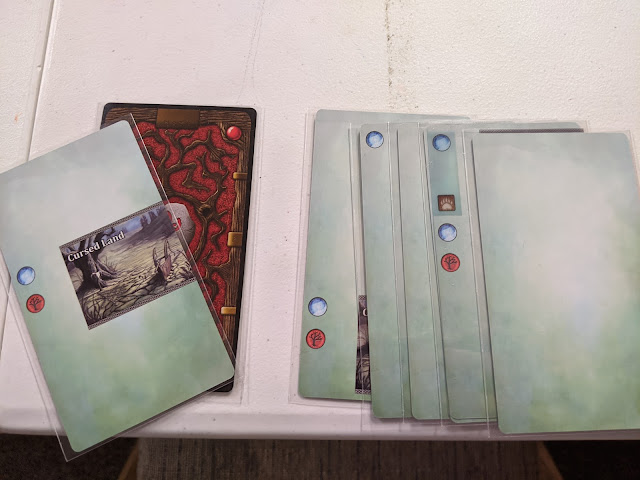 At the start of the game--and at the end of every subsequent turn--you prep your field. This means you flip cards over and place them in front of you until three red "decay" icons are visible. The third sits on top of your deck, but is not considered in play. On your turn, you can either play what you have or "push", revealing more cards from your deck. Be careful, though, because if you reveal a fourth decay symbol, your field has spoiled and your turn ends immediately. 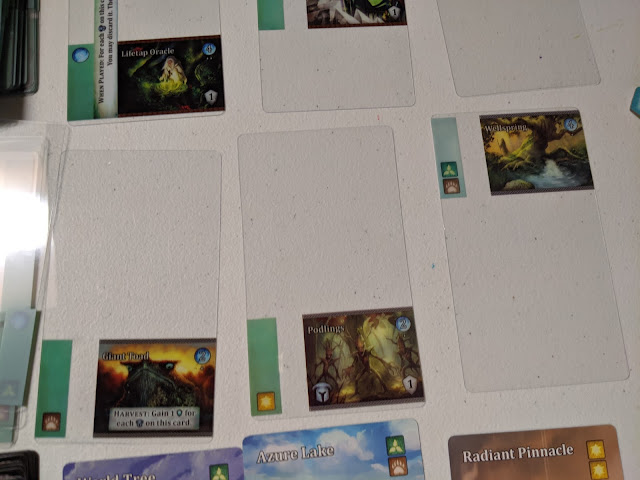 Assuming you don't spoil, you count up the blue "mana" icons on the edges of your cards and those are your money. You use that to purchase up to two advancement cards that are then sleeved into your deck. 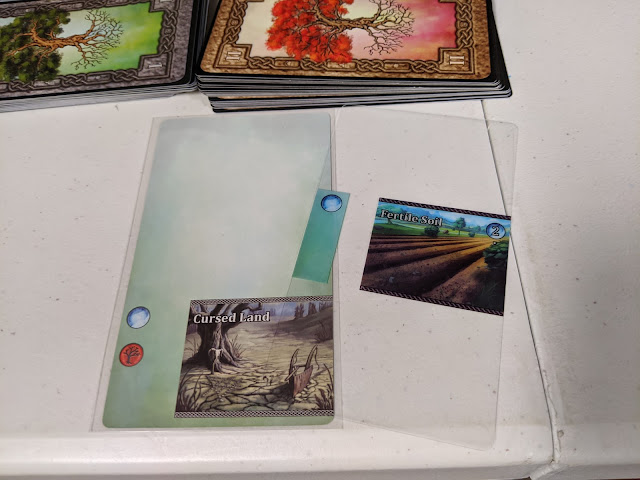 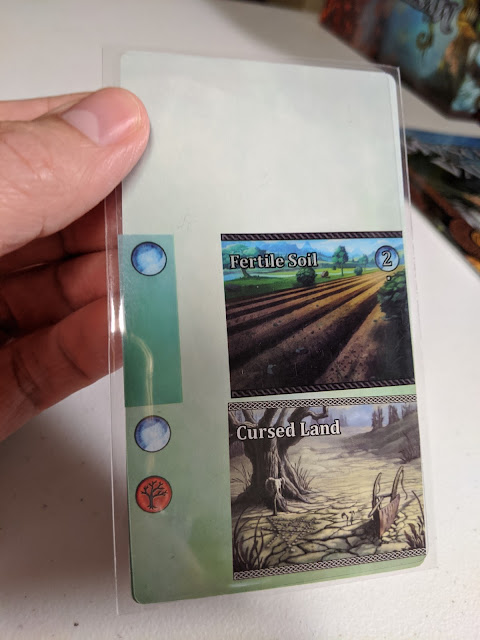 In addition to buying advancements, there are a set of Vale Cards that you can purchase using other symbols on your cards that go into play as permanents. Because if you're going to be a fixed-deck deck-builder, you might as well be a tableau-builder too. 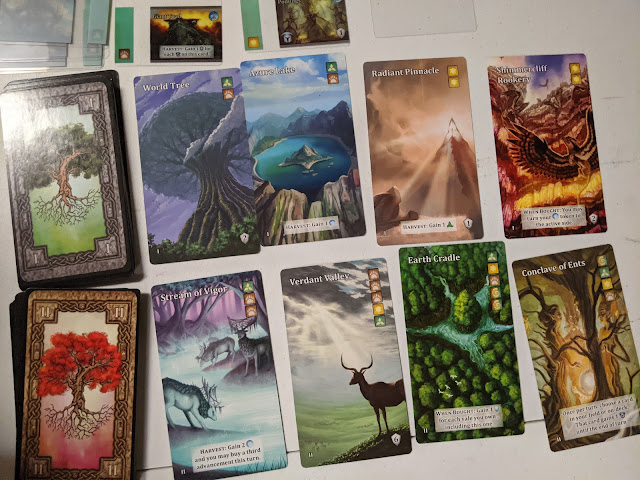 These will give you permanent bonuses and/or victory points. Over the course of the game, cards you play will allow you to collect victory tokens from a pool whose size is determined by the number of players. Once the pool is empty, the game ends. Add up your point tokens and any points awarded by cards. Whoever has the most points wins. 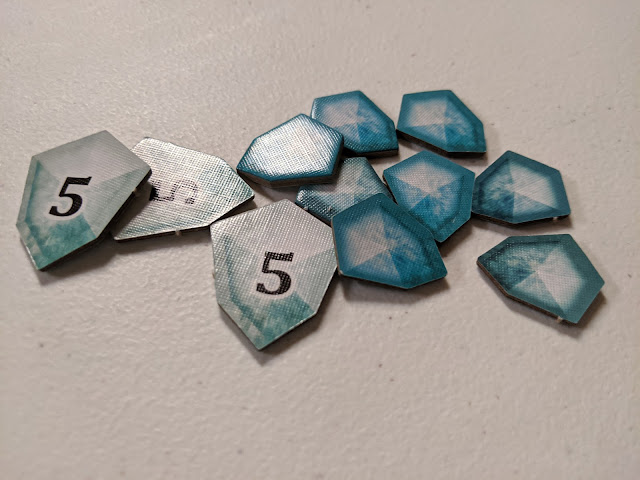 As is customary among the Druids...

It's a fascinating premise, really. What if you took a deck-builder, but instead of acquiring cards, you upgrade them? It's the kind of thing that feels more like a video game than a board game, and I've seen some very basic iterations of this concept in Dominion expansions and Flip City, but never anything with the kind of customization you get here. Each card can take up to three advancements, so you're not just trying to build synergies across the deck, you're trying to build them within the same card. The press-your-luck element means that hand-size isn't really an issue. The limit is rather how many cards you can get through before you spoil. So if you end up leaving half your cards blank, that's okay.
All of this adds up to something that feels like more than just a deck-builder-with-a-gimmick, but a game with its own identity.

As with all deck-builders, set-up and tear-down are a pain. But it's even worse in this case because you're having to dig cards out of sleeves. And you know how it's hard to shuffle sleeved cards? Well, these cards aren't just sleeved--they're Tarot-sized. So enjoy that. The biggest gripe is that the card advancements all come with a protective coat on them that you have to peel off before you can play. So have fun doing that a hundred times.

There are a number of expansions that add new advancements, new Vale cards, and more tokens and cards that give you permanent or one-time bonuses: Vale Of Magic, Vale Of The Wild, Nemesis, Harmony, Mana Storm, and Twilight Garden. They're all fine, but none of them are essential. There's also a Conclave expansion that doubles as a storage solution and includes extra rules, cards, and tokens that will allow the game to be played with up to six players.

This game was the proof-of-concept for card-crafting, and AEG has taken that idea and run with it, iterating on the concept with the trick-taking game Custom Heroes, the euro-style Edge Of Darkness, and the forthcoming Pirate 4x game Dead Reckoning.
Tune in next week when the student becomes the master in Onitama...
In Acquire-To-Zendo, Kurt is going through his favorite board games in alphabetical order. Read the explainer or see more posts.