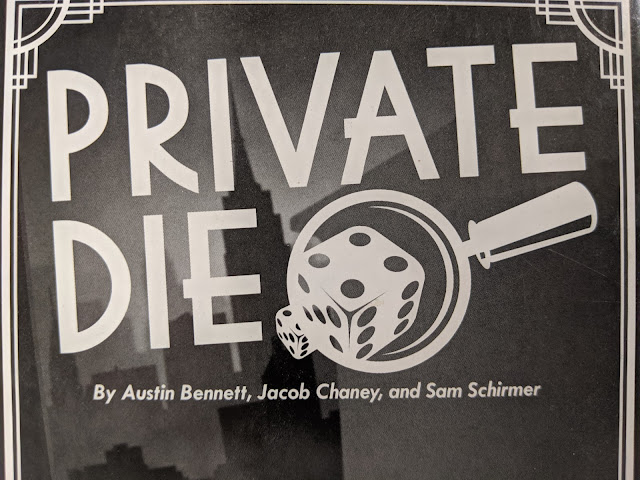 2016, 2-6 players
Complexity: light
Harvey loosened his tie and wiped the sweat off his bald head. In the chair opposite him was a hard woman--bad luck in a tan dress with playful eyes and a devilish smirk. She lit a cigarette and blew a puff of smoke out the side of her mouth. Harvey glowered. This witness had information and he wanted. It was time to roll the dice. 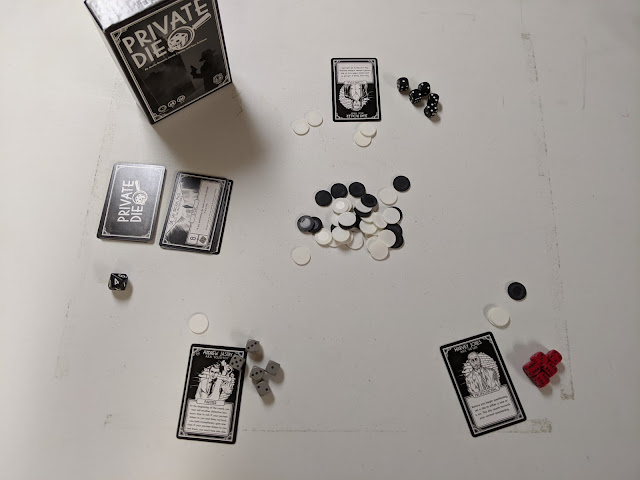 In Private Die, you and up to five friends take on the role of police detectives investigating a murder by interrogating a string of informants or suspects in order to gather clues. Each player has a pool of five dice and a character card that outlines any special powers they have, as well as two clues to start. 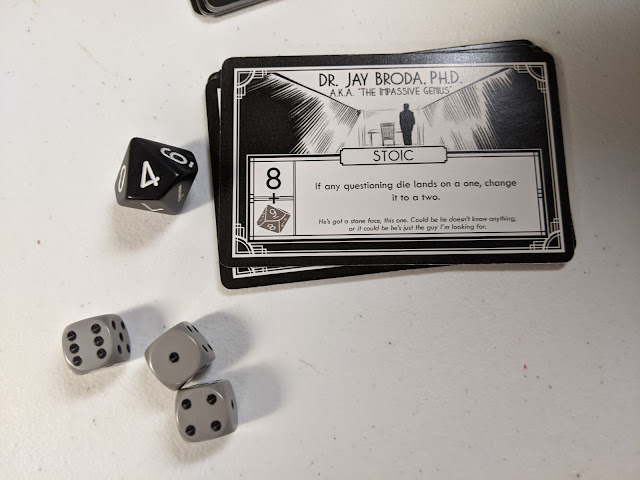 At the start of each round, a Witness card comes up. The active player rolls a 10-sided die and adds it to the Witness's number to get the target roll. In turn, each player declares how many dice they want to roll in an attempt to get as close to the target number as possible without going over. If a player busts, they lose two clues and are out for the round. If they roll too low and want to add another die, they can spend a clue to do so. 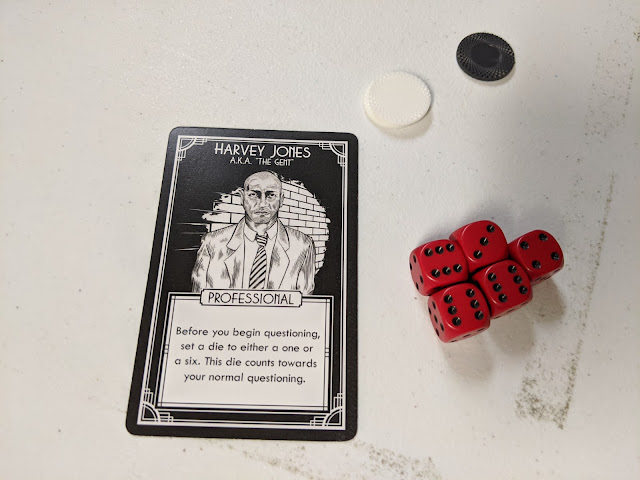 Play continues until each player has rolled. If any player rolls the target exactly, they get a bonus clue. Then, whoever gets the closest to the target gets one clue for every die they used. If two players are tied, they have a roll-off. They each take the pool of dice that they used this round and re-roll them. High roll breaks the tie. Whoever won the round becomes the new active player, and the next Witness card comes up. 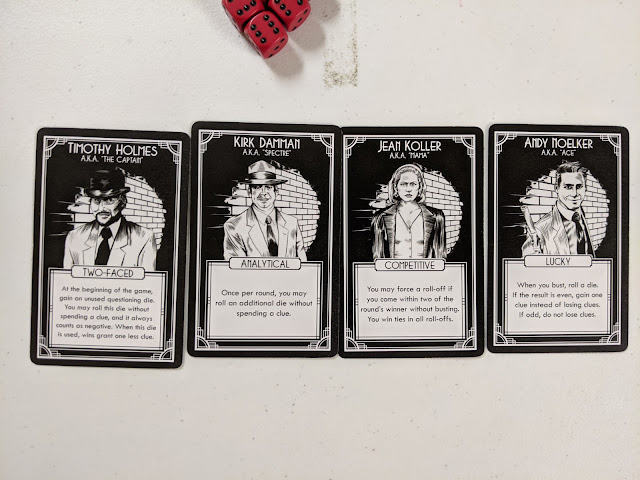 To complicate things, each detective has an ability that makes them unique. Timothy "The Captain" Holmes gets an extra die that can be used for free once per turn as a negative die. Jean "Mama" Koller can force roll-offs. Andy "Ace" Noelker can't lose clues from busting. Additionally, each Witness card also has a condition that changes the gameplay slightly for each round. It might nullify your Detective ability, or make all your even-numbered dice count as zeros. It might limit the number of dice you can roll. 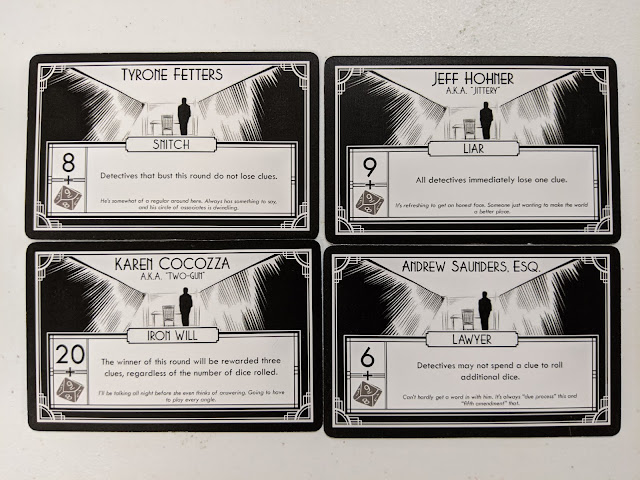 If the Witness stack ever empties, the case has gone cold and everyone loses. But if one player amasses fifteen clues, they win. 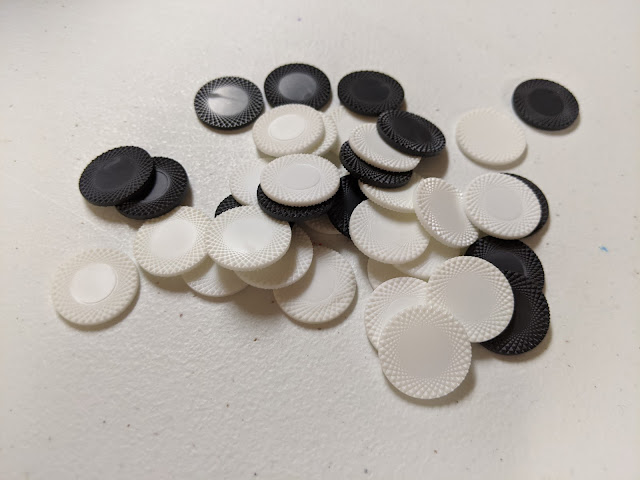 For one, they went all in on the aesthetic. The components are all black-and-white except for some of the dice that have some red in them. Every character in the game has a period-appropriate nickname. The card art has the type of art-deco borders that evoke the movies of that time period.
As far as gameplay goes, it's a very straightforward game that plays quickly, making it a good filler. On top of which, press-your-luck dice games are inherently exciting. There's enough variety in the Witness and Detective cards to keep it interesting on replays, and there are some alternate setups available if you want to mix it up even more. 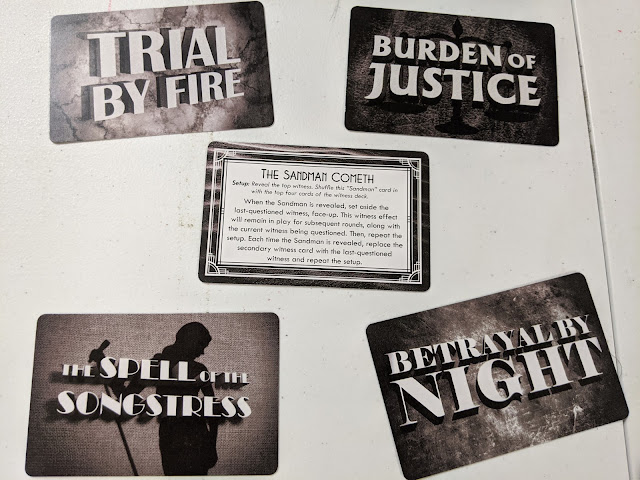 It's a dice game, and dice games can feel pretty arbitrary, especially to we humans who are terrible at calculating odds in our heads. Apart from that, there's not much to it, so there's not much to not like. Apart from--if you want to get pedantic--the fact that police detectives are not, in fact, private investigators.
It's not the easiest game to find and it's not got the most SEO-friendly title. As far as I can tell, it's only available through the publisher's website.

I believe there is a single promo card available.

Light, fun, and exciting.
Tune in next week when we build stained glass windows in Sagrada...
In Acquire-To-Zendo, Kurt is going through his favorite board games in alphabetical order. Read the explainer or see more posts.