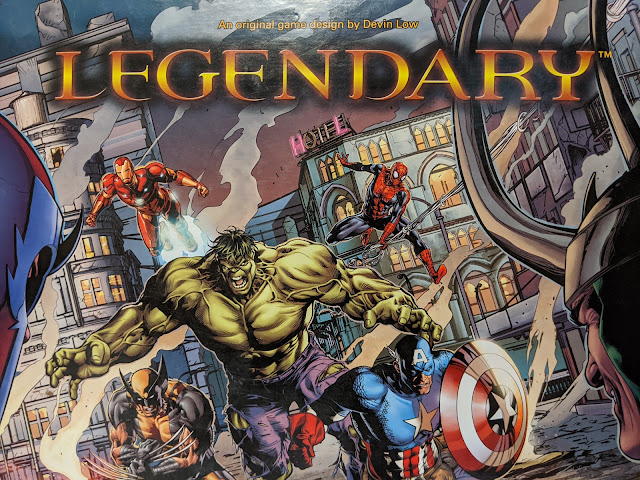 2012, 1-5 players
Complexity: moderate
Okay. Technically the name of this game is Legendary: A Marvel Deck-Building Game. I don't know anyone who actually calls it that. There are, in fact, a whole series of Legendary games that touch on IPs like Alien, Predator, Buffy The Vampire Slayer, Big Trouble In Little China, and so forth. Some of those fall under the Legendary Encounters moniker. So why is this one just called Legendary? It's all just silly. So I'm going to keep calling it Marvel Legendary because that's what it might as well be called, dammit.
Also, I forgot to double-check the name before I'd gotten past it in the alphabet, so that one's on me. 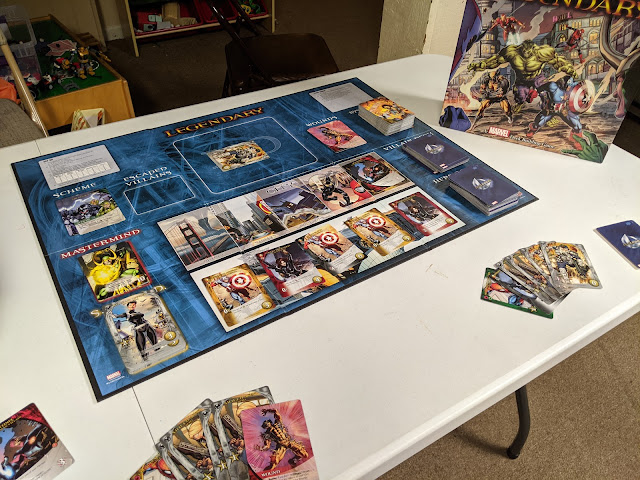 Marvel Legendary* is a semi-cooperative deck-buliding game for one to five players, in which you and your friends form a team of (typically) five superheroes in order to defeat a Mastermind before they can complete their evil scheme. This is an Ascension-style deck-builder in the sense that there's a shifting market in multiple currencies rather than a fixed market in only one. Here, though, there are two shifting markets. 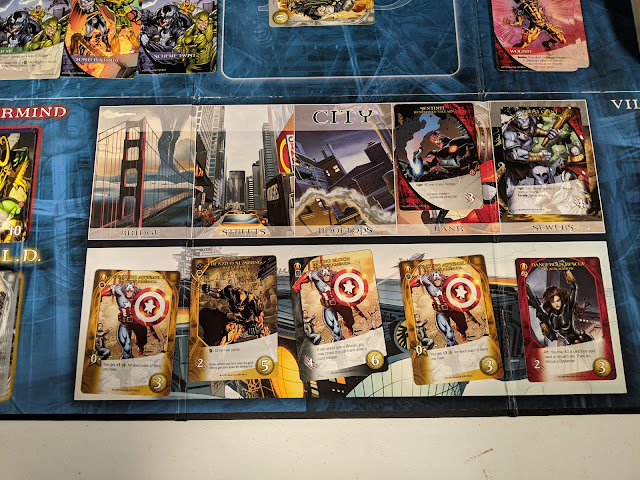 There are always five hero cards you can purchase or "recruit" and a row of villain cards for you to defeat that come out one per turn. Hence, your two currencies are damage and recruitment, symbolized with star points and strike points. 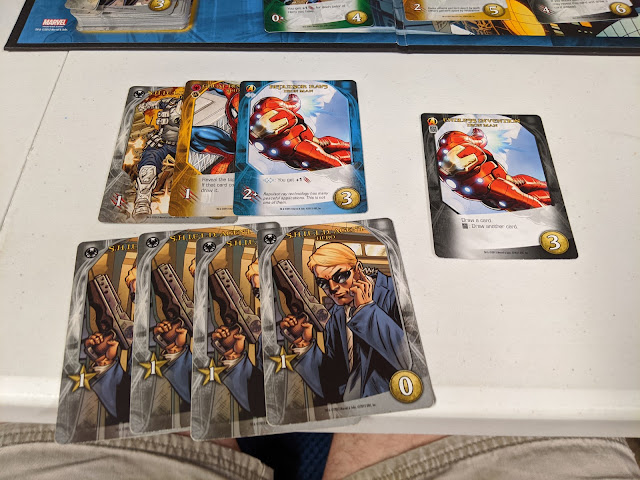 Hero cards are typed as well. In the image above, you can see the two different Iron Man cards with different borders, representing technology in black and ranged combat in blue. They also have group membership: Iron Man is part of the Avengers, whereas Spider-Man is part of the "Spidey-friends" clique. These are important because you can stack them for bonuses. On the black Iron Man card, you can see that playing it lets you draw a card. But if you had already played a technology card that turn, then you'd be able to draw again. 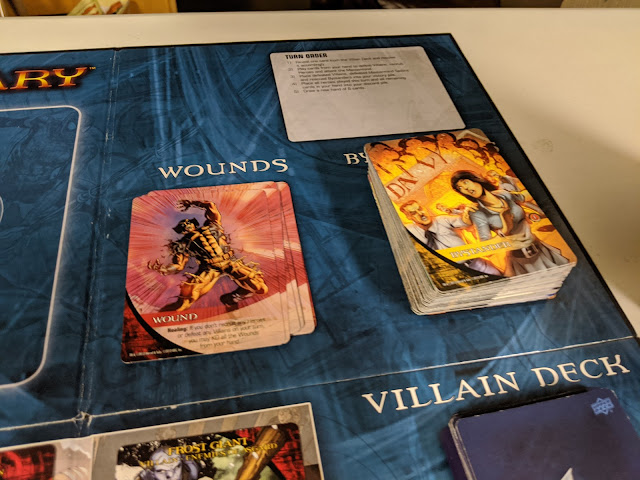 In typical deck-builder fashion, newly acquired hero cards go into your discard pile where they will be worked into your deck as you cycle through it. Villain cards go into a victory pile after they're defeated. If villain cards are able to advance all the way across city and "escape" then there are consequences, so you want to keep on top of that. Villains can give you wounds, which clog up your deck with worthless cards, and they can take hostages in the form of bystanders. 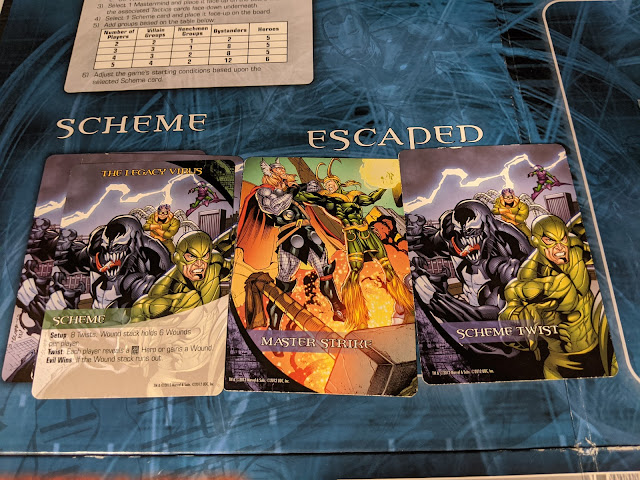 The villain deck also Scheme Twist and Master Strike cards which will activate some ability on the Mastermind or the Scheme. In the scenario I was playing, for instance, whenever a Scheme Twist comes out, all players must reveal a technology card from their hand or they take a wound. If the pile of wounds ever runs out, the heroes lose the game. Similarly, the Master Strike activates an effect on the Mastermind. 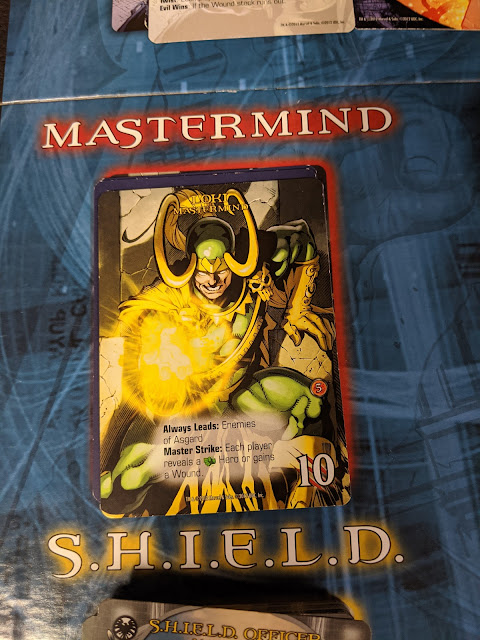 Your goal is to defeat the Mastermind four times, which means getting to the point where you can consistently score (in this case) ten points of damage in a single turn. Once the Mastermind has been defeated, the heroes win. Alternately, if you get through the entire villain deck without triggering a loss condition, that isn't considered a "win" but it isn't a loss either. Afterward, all the players tally up the points in their victory piles to see who was the biggest winner on the team. 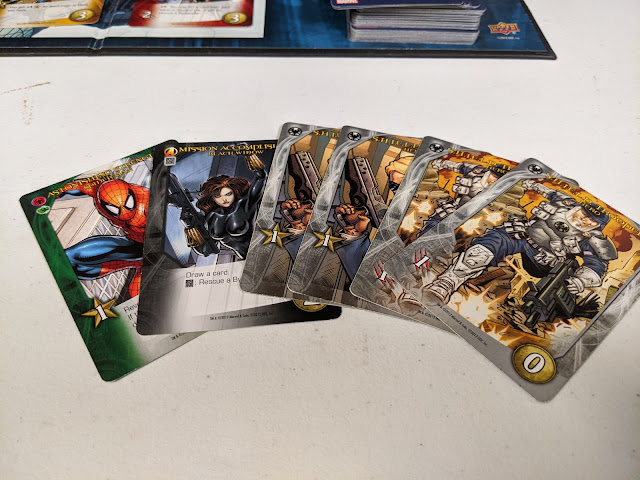 The real draw of this game is that it's kind of a Marvel storytelling Lego set. Put together a team of five heroes to take on whatever Mastermind you want in whatever scenario you want supported by whatever henchmen and villain groups you aspire to defeat. That's, honestly, pretty fun right there. The base game includes fan-favorites (ca. 2012), so most of the Avengers plus Spider-Man, Wolverine, Gambit, Cyclops for some reason. 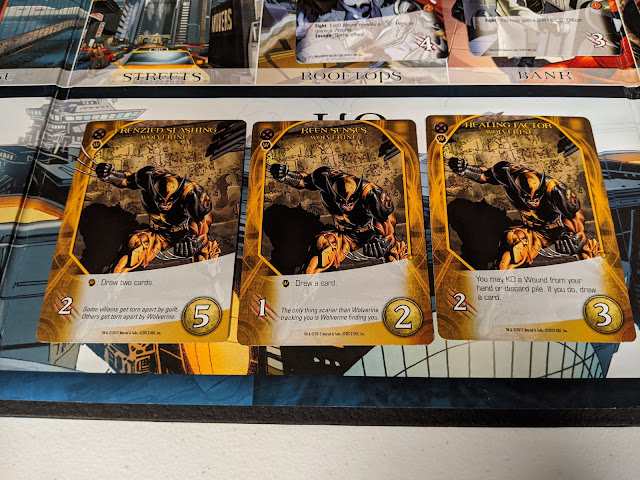 It also does a pretty good job of abstracting those heroes into gameplay mechanics. Wolverine's cards all have the yellow border, which represents instinct. And since his big superpower is his ability to heal, his cards are all about getting extra card draw and removing wounds. Captain America gets bonuses for having different card types in play at once. Hulk can do a lot of damage for cheap, but he gives other players wounds when he does so. Black Widow's cards get more powerful as you rescue more bystanders. Gambit does deck manipulation--get it!?
Similarly, the Schemes get very inventive. There's a lot of replayability here, even with just what's in the base box.

As with all deck-builders, setup and teardown are a pain, moreso than usual in this case since your hero and villain decks are both assembled from other smaller decks. Gameplay can be wildly inconsistent as well. Some decks and scenarios synergize well, and some just plain don't. Especially if you use a randomizer for your setup, you can end up losing very quickly or winning way too easily.
The box is not very good as an organizer, especially once you start acquiring expansions, and I don't love the board. Instead I use a custom-printed roll-up mat. Also, the cards could be a slightly higher quality, especially given the price point. Some of them are getting pretty mealy at this point, but there's not much point in sleeving cards for a deck-builder, since you have to do so much shuffling. I wish they'd include starting cards in some of the bigger expansions and make those playable as stand-alone games, but no such luck.

Is the Space Pope reptilian? This game was invented so it could be expanded. Half of the expansions are bald-faced tie-ins to film-releases or comic runs. There's a lot. Like... a lot. 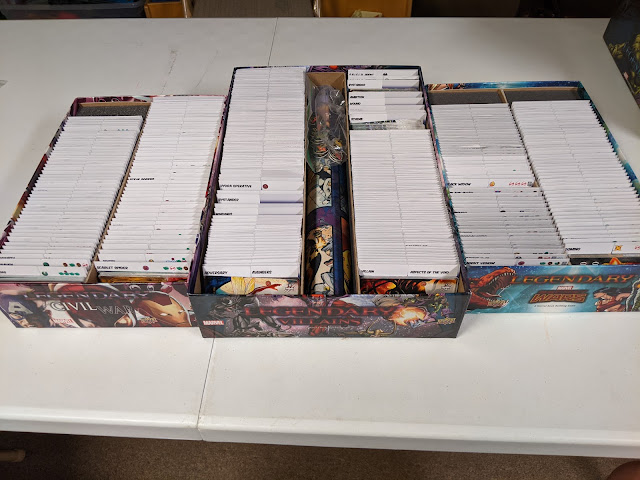 And that's just what I have filed.
The main game has been re-issued with art from the films and a new villain: Warmonger. There are big-box expansions: Dark City, Civil War, Secret Wars, Volumes 1 and 2, X-Men, and World War Hulk. There are small-box expansions: Fantastic Four, Paint The Town Red, Guardians Of The Galaxy, Deadpool, Captain America 75th Anniversary, Spider-Man: Homecoming, Marvel Noir, Champions, Ant-Man, Venom, S.H.I.E.L.D., Revelations, Dimensions, Heroes Of Asgard, and New Mutants. These all add new heroes, new villains, new schemes, and new keywords. Somewhere in there we got sidekicks, ambitions, and special types of wounds and bystanders.
There's also the Legendary Villains spin-off that uses the same game engine but has you playing as bad guys, and there's an expansion for that called Fear Itself, and has rules to let you cross-pollinated between the two series. It was not a particularly successful game, since it plays a lot more cutthroat, which is thematically appropriate but not exactly "fun" to do. Additionally, a lot of the non-Marvel Legendary games have rules that allow them to be played with other sets. So if you wanted to team up the Fantastic Four with Jayne from Firefly, you can make that happen. But maybe don't.
Out of all of that, I'd recommend these: Paint The Town Red is Spider-Man content, and it's great. Fantastic Four used to be difficult to find, but it's been reprinted and is also very good. Dark City adds a lot of X-Men and X-Factor content, which the base game is largely missing. And Guardians Of The Galaxy includes the Infinity Gems as a villain group, which play unlike anything else and are worth checking out. They include a scenario where if one player acquires too many of the stones, they turn evil and everyone else loses. Pretty diabolical for a competitive game.

This is a game that I both love and hate. It's a lot of fun. But there's really too much content at this point. At a certain point it stops being a game and becomes a lifestyle.
It's probably worth bringing up the DC Comics Deckbuilder, to which this is often compared. DCDB is good, definitely, and has much more streamlined gameplay. I like this one better, and I like these characters better, but if this sounds interesting but a little overwhelming to you, DCDB is worth looking into.

Tune in next week when we solve a supernatural murder in Mysterium...
In Acquire-To-Zendo, Kurt is going through his favorite board games in alphabetical order. Read the explainer or see more posts.