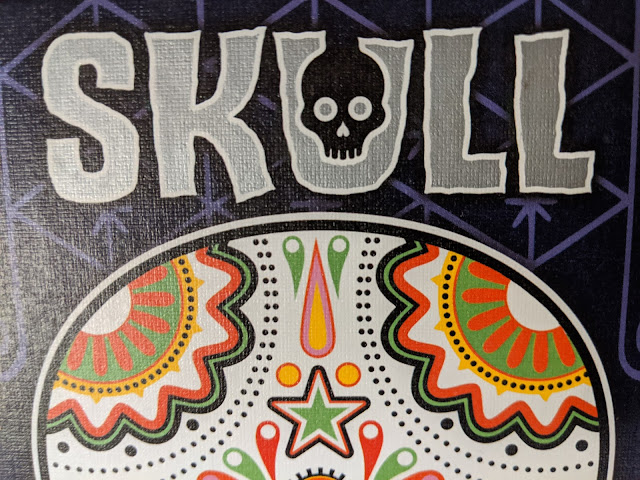 2011, 3-6 players
Complexity: light/moderate
Skull, also known as Skull And Roses, is a bluffing game inspired by Dia De Los Muertos. I've heard apocryphal stories that it was played by the Hell's Angels in biker bars, which is why it's played with coaster.
That's... almost certainly not true, but it's a very intense press-your-luck bluffing game. 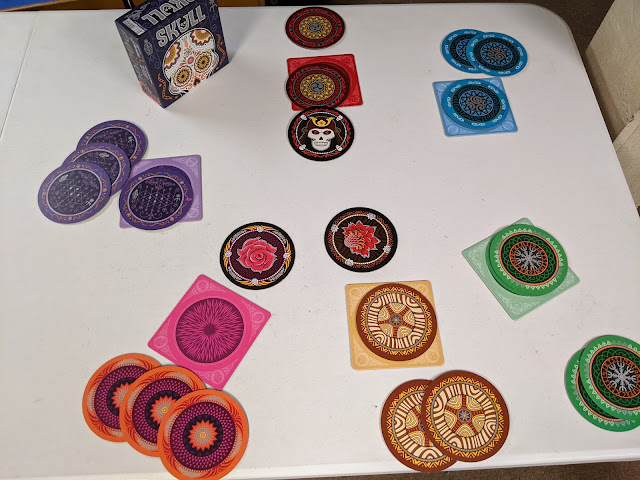 In Skull, you and two-to-five friends will try to bluff and outbid each other. Every player has a two-sided mat and four coasters, three of which have roses on them, and the last of which has a skull. At the start of the round, you place one coaster on your mat, and then in turn order, each player has the opportunity to either place another skull or make a bid. 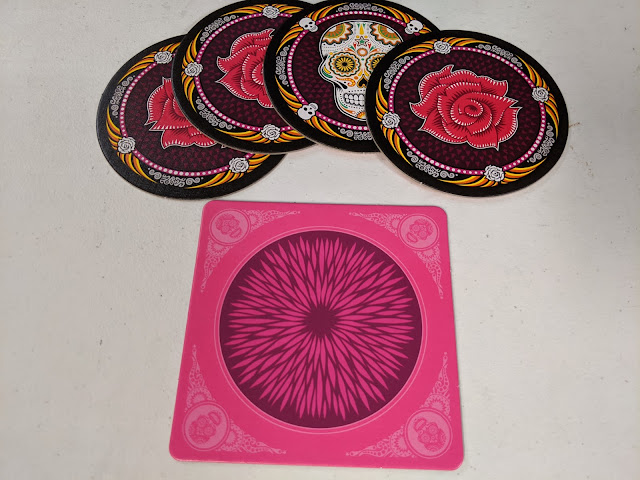 The bid is the number of coasters you think you can flip over without revealing a skull--but here's the kicker: you have to flip over all of the coasters on your own mat first. Once one player has bid, each other player can only pass or bid higher. When all players have passed, whoever has the highest bid starts flipping over coasters--again, starting with their own. If they manage to flip over as many coasters as they bid, then they flip over the player mat, indicating that you have 1 point. But if they do reveal a skull, they have to lose a random coaster. 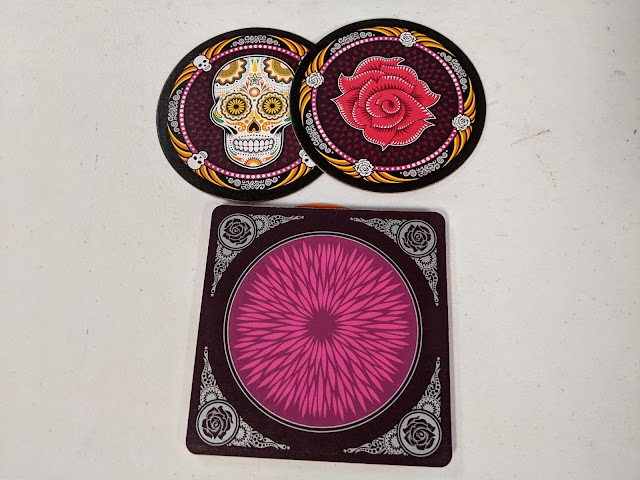 As the supply of coasters dwindles, you'll find yourself being forced to bid earlier than you'd like, or perhaps you'll lose your skull coaster, which can make it difficult for you to trip up other players. If you ever lose your last coaster, you're eliminated from the game. But, on the other hand, if you're able to pull off your bid twice and claim a second point, you win. 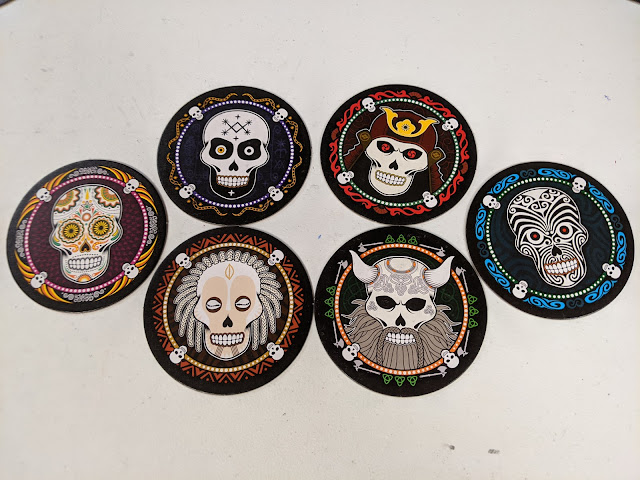 The intensity of this game comes from the fact that victory or defeat hinges on very small numbers. It only takes two successful bids to win the game, but two unsuccessful ones can really set you back, and four gets you eliminated entirely. That means every single round of bidding is weighty. If there are only six coasters in play, then there's a high likelihood that the bid will end up at 4 or 5. If you are the highest bidder in a situation like that, it's going to come down to guessing at which players have probably played skulls and trying to pick everyone else. In fact, it's not all that uncommon for an aggressive player to make the highest possible bid early in the round, hoping that the other players won't play a skull as their very first coaster and trying to score an easy point that way.
But the main mechanic here is the bluff. When you flip coasters, you have to flip yours over first, meaning if you win the bid and you have a skull in your stack, you're going to flip it. And that's bad news for you. Ideally you want to have a skull on your mat and entice other the bid-winner to assume that your stack is safe. The best way to do this is to bid high enough to make it look like you're serious, but low enough that someone else will outbid you.
And the stakes only get higher as the game progresses. Once someone has scored a point, the urge to deny them the bid becomes very strong, or at the very least to try and sabotage them. Like they say about poker, this is a situation where you're not so much playing the cards as you are playing the other players.
(Note: yes, I know, it's not actually all that true about poker--but they do say that)

While the idea of playing this on coasters is very cool... I wish it was cards instead. You have to punch them out, which means there are going to be inconsistencies in the way the coaster is torn out from the punch board. And it can be noticeable enough that you can identify specific coasters from the back. Also, holding four coasters in your hand is just awkward. They're big, round, and chunky. This could have been a wallet game with cards and it would cost a third as much.
The other caution is that one that accompanies all games that have a social component to them--they way they play is going to depend a lot on the group you're playing with. I've had games of Skull that were amazing and I've had some that were arduous.

Nope. Nor should it ever be.

It's a smaller game that pushes up the intensity for bluffing and press-your-luck mechanics, and it's awesome with the right crowd.
Tune in next week when we mash up some crazy factions in Smash Up...
In Acquire-To-Zendo, Kurt is going through his favorite board games in alphabetical order. Read the explainer or see more posts.