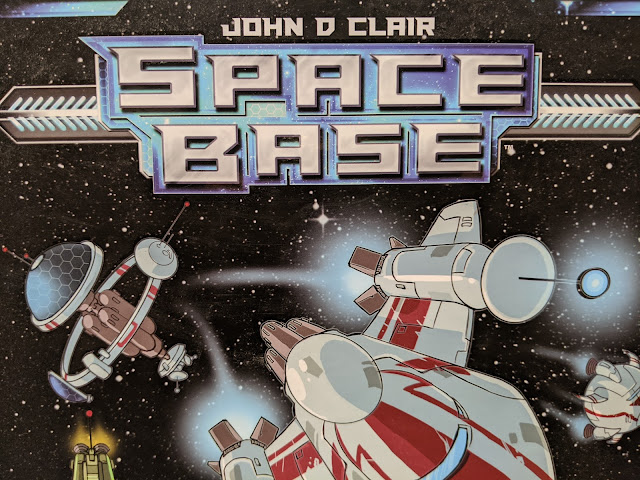 2018, 2-5 players
Complexity: moderate
Machi Koro is the first tableau-building game I remember playing. It took the mechanics of deck-building--purchasing cards and adding them to your pool--but changed things up by using a die as a randomizer instead of your deck. Purchased cards went in front of you as part of your "tableau" and were activated by a die roll. Some get activated during your turn, some out-of-turn. It's a fun game but it has a slow ramp-up and a huge table footprint. I've played a few others since, notably Valeria: Card Kingdoms, and I like the mechanism, but I've been waiting for someone to really work out the kinks.
In Space Base, John D. Clair worked out the kinks.

In Space Base, you and up to four friends are commodores of your individual space fleets competing for a promotion to the admiralty. You have twelve ship-building sectors generating resources for you, which you will then deploy to colonize those sectors. 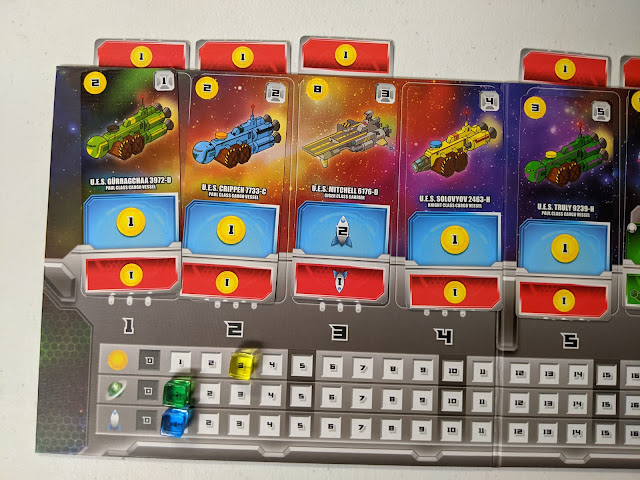 On your turn, you roll two dice and everyone collects rewards for whatever sector is rolled--individual players choose whether to treat the dice as individuals or a sum. Every sector can have blue and red rewards. Blue rewards are collected on your turn, red on other players' turns. Rewards typically come in the form of credit (yellow, used to purchase cards), income (green, which provide credits every turn), and victory points (blue, which make you win the game). 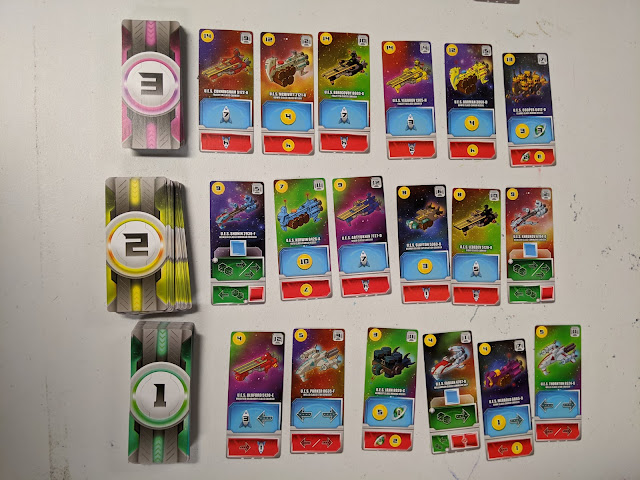 After you've rolled, you may use your credit to purchase one new ship, that can be built in a specific sector, from a tiered market. The higher the tier, the more expensive the card, and the more valuable the rewards it will net you. Similarly, the higher the sector, the greater the rewards (since higher dice rolls are far less common). You can see that there are also green rewards. These are charged so they can be played at any time, allowing you to spend a charge to treat the dice total as one or two sectors higher. 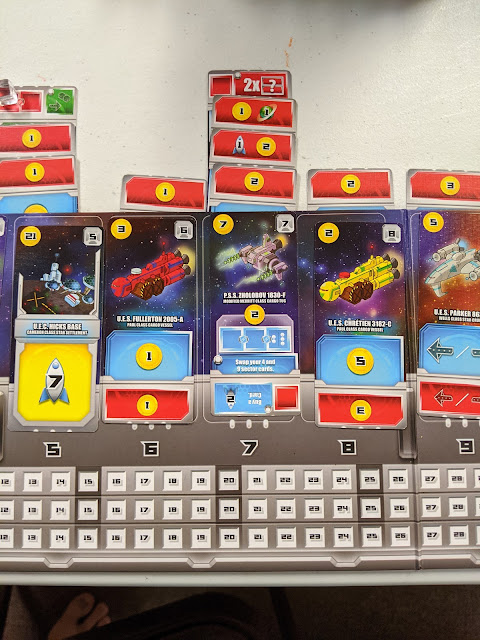 When you purchase a card and add it to a sector, you take the card that was already there, flip it over, and slide it under the top of that same sector, "deploying" the ship and giving you access to its red reward instead of its blue. While blue rewards tend to be greater, the red rewards can stack. So, as you can see, if this player rolled an 8, they would get 5 credits, but when a different player rolls an 8, they only get 2. However, when another player rolls a 7, they get 5 credits, 1 income, 1 victory point, and a charge that they can use to double their rewards for a different turn. 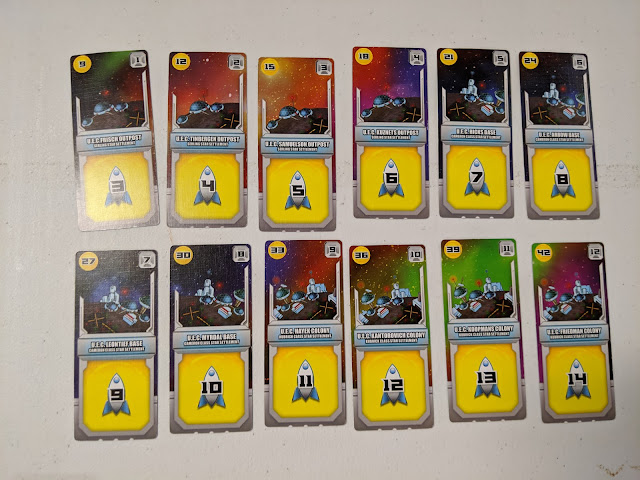 In addition to the 18 ship cards, there are 12 colony cards that can be purchased, which grant you a one-time bundle of victory points. However, once you build a colony, you can't replace it or score blue rewards for that sector at all, so moving on these too quickly can slow down your progress. 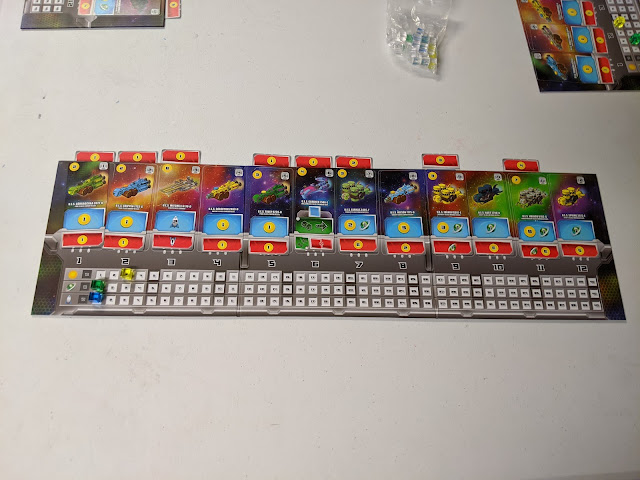 Once someone scores 40 victory points, players finish out the round and the player with the highest score wins.

As noted above, Space Base didn't reinvent the wheel so much as it figure out a way to make it roll more smoothly. Compare it to Machi Koro where you start with two cards in your tableau and you roll one die, meaning there will be turns where you just can't do much of anything. You build out your tableau and start rolling an additional die, but by then you've got over a dozen cards spread out in front of every player in addition to the market you're buying from.
Space Base makes some changes that really speed gameplay along, especially in the early game. First, everyone always rolls two dice and everyone starts the game with thirteen cards, meaning they have a full tableau and will always collect rewards on their own turn. As such, filling out your tableau means early on you're really just looking for coverage for the numbers 1-6, meaning you'll always be able to collect rewards on your opponents' turns as well.
The form factor is another huge improvement over other tableau-builders. The player board, along with the fact that the cards are half the width and that you stack them as you add to your sectors, means your play area stays compact. The use of "income" as a reward is extremely helpful too. It gives you a way to ramp up your production without just adding more and more cards.
This cuts down on some of the hassles of tableau-building, allowing the cool stuff to shine. It takes the strategy and engine-building of a deck-builder, but with the added excitement you get from rolling dice. Turns are short, and getting rewards off-turn means players stay engaged throughout, making the game feel very fast-paced despite that it takes a good hour to play. And once your engine comes together, you're going to rack up points fast. You can easily spend the first forty minutes getting 10 victory points and then get the next 30 over the course of only three or four turns.

The theming is very cool, but it doesn't matter. This game could have been about anything. The rule book has characters, stories, backstories for specific vessels, and a list of the classes and names of all the ships--most of which are homages to creators of science fiction and fantasy (someone had a lot of fun putting that list together). None of it matters. It doesn't come into gameplay at all.
As for gameplay, sliding cards under the board works... until it doesn't. Fishing a card out that slid too far can be a pain, especially if your table surface is inconsistent. This game is a strong candidate for using playmats. And I would have loved some divots on the player board for the acrylic tracking cubes. The squares are so small that it's easy for the cubes to slide around and you can lose track of things.
Finally, while it doesn't have the massive footprint of something like Machi Koro--thanks to the thinner cards and the way off-turn rewards stack--you still have individual player boards and a fixed market of 30 (!!!!) cards, so that's a good chunk of table.

There are two expansions available. The first is a Saga expansion called The Emergency Of Shy Pluto, which tells a story over the course of four or five games and adds new gameplay elements throughout (I won't spoil, but many of them translate to "more dice" in some way or another). I think the new content is cool, and I love the "Saga" aspect of it, although it does make the game more swingy.
The second is a storage solution called Command Station that adds components and rules to allow up to seven people to play in a single game. I haven't acquired it yet, since Shy Pluto fits into the base game box just fine, but if they release more Saga expansions, I probably will.

Space Base takes the tableau builder mechanic and tweaks it just right. It's fun, fast, and one of my favorite new games I discovered in the last couple years.
Tune in next week when Catan fights back in Spirit Island...
In Acquire-To-Zendo, Kurt is going through his favorite board games in alphabetical order. Read the explainer or see more posts.