💥 And Everybody's Smashing Things Down... 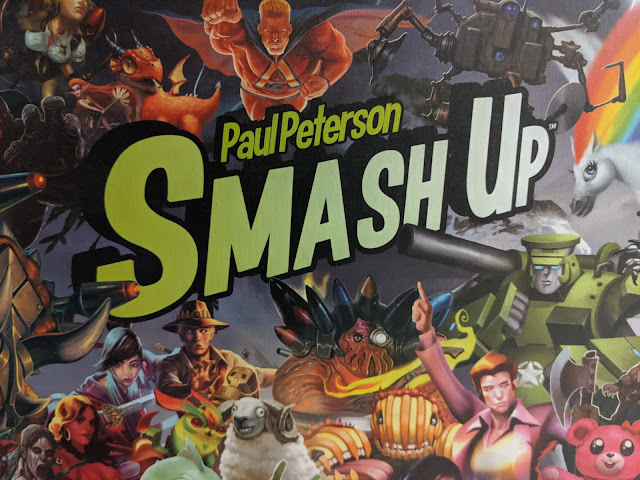 2012, 2-4 players
Complexity: light/moderate
Smash Up is the flagship title for AEG. It was featured on an early episode of Wil Wheaton's TableTop and with its myriad expansions and party-like atmosphere, it's been a gaming fixture for the last eight years. 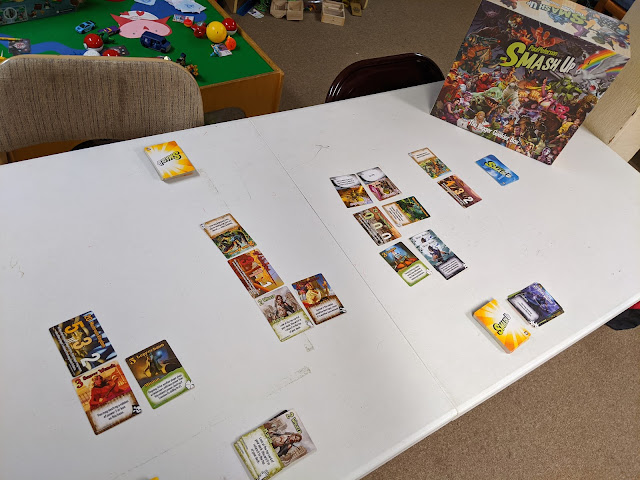 Smash Up is sort of hybrid of area control gameplay, take that mechanics, and fart jokes. It's built around a gimmick called "shuffle-building". The base game has eight factions in it: Robots, Wizards, Zombies, Pirates, Tricksters, Ninjas, Dinosaurs, and Aliens. The different factions are built around unique gameplay mechanics. Pirates move around from base to base, ninjas play out of turn and do generally sneaky and underhanded things, zombies play cards from the discard pile (known in Magic: The Gathering as "the graveyard"--get it!?), etc, etc, etc. And the gimmick is this: instead of picking one faction, you pick two, shuffle them together, and that's your deck. 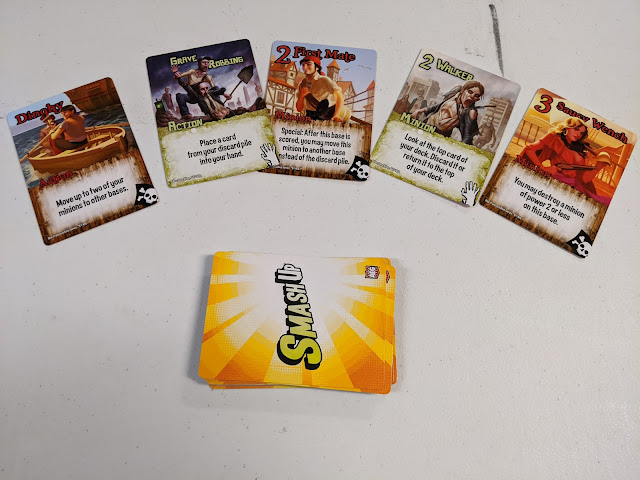 You're not Pirates or Zombies. You get to be Pirate Zombies, and exploit the mechanics of both. Smashing them up, if you will. Beyond that, gameplay is pretty simple. Every player has a forty card deck of minions and actions, and on their turn they play up to one of each from their hand in an effort to try to gain control of bases. Each base has a break point. Once the total points of the minions in play there exceeds the breaking point of the base, the base "breaks" and points are awarded to the players with the most, second most, and third most influence on that base. A new base comes out, and play proceeds. 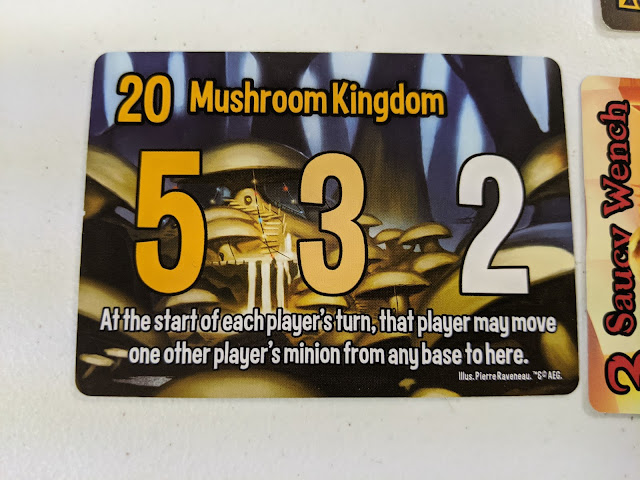 Bases also have some unique mechanism that is active for cards played there. There's always one more base in play than the number of players, so you have options for which you want to take down--but it's usually a savvy move to make sure you have some representation everywhere because those second-and-third-place point bonuses add up! Once someone gets fifteen points, the game ends and the highest score wins. 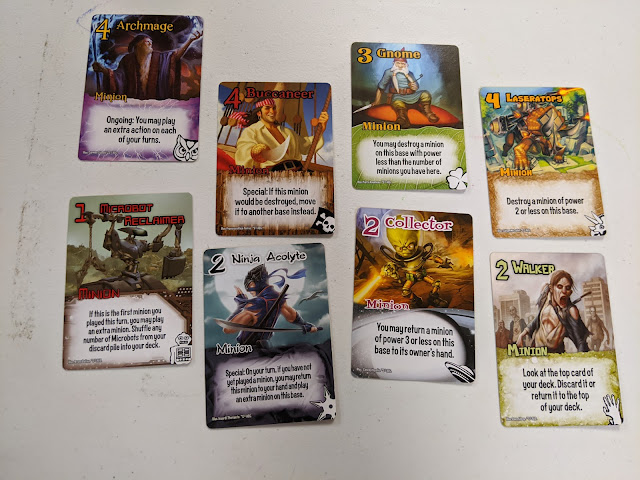 But in the end we're all winners because something something the friends we made along the way.

The joy of this game is in putting factions together in weird combinations. Robots play extra minions and Wizards play extra actions, so maybe you put those together in an attempt to play as many cards as humanly possible. Or maybe you want to combine the awesomely overpowered Dinosaurs (who are wearing armor and lasers for some reason?) with the mess-with-your-opponent mechanics of the Tricksters. There are endless combinations--especially as you start adding expansion content.
And speaking of expansions... there are a lot of them, and this is another game where the designers just got better and better at what they were doing as they went, so the later content is funnier and feels more balanced than the earlier content. Indeed, a lot of the art and card titles are outright hilarious. There's a whole expansion called "Cease and Desist" where the factions are obvious knock-offs of major IPs--so you have the Star Roamers and the Astro Knights and Changerbots. And those are not only fun to play (because they do find interesting ways to mix up game mechanics), but they're just plain hilarious to read through.
It makes for a decent gateway/party game because it's accessible and--not to put to fine a point on it--kind of goofy. And it generally plays pretty quickly, especially with people who know it well.

Well... it's not the most balanced thing in the world. And the fact that the combinations of factions increase exponentially with every new means it's basically impossible for it to ever be balanced. Again, the fun here is in finding cool combinations, but that can also make it seem broken, especially since certain powerhouse combinations are well known in the community. Ghosts and Zombies pair exceptionally well together, as do Robots and Mythic Horses. If you're new to the game and going up against someone using one of those... it's not going to be a fun game for you.
Also, as mentioned above, the designers have gotten consistently better, which means the base game content is the weakest. Ninjas and Wizards just aren't that useful--whereas Zombies, on the other hand, are frequently the first faction picked. Because of all of this, the game can feel very haphazard and swingy, and if you're the type of gamer who thinks you might get frustrated by this, then I can guarantee you that you will get frustrated by this.

Yep, as states above. And--bonus--every single expansion is technically playable as a standalone two-player set with four factions and related bases and tokens. They're usually themed around aesthetic, mechanic, or both, but honestly it's pretty grab-bag. Let's do a quick rundown, shall we? 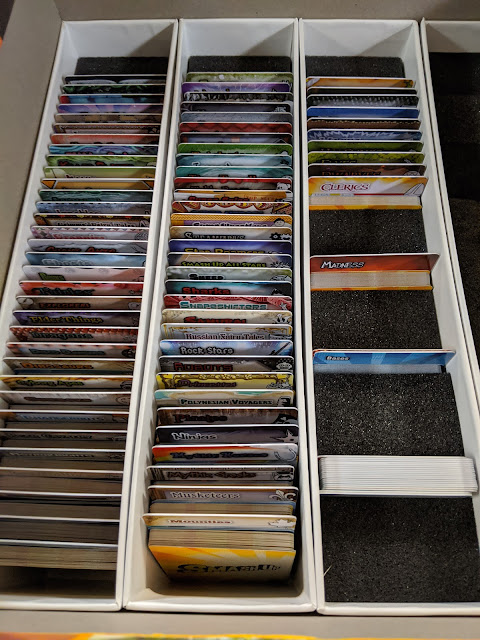 As of this writing, there are 73 factions that can be smashed together. And there's an upcoming Smash Up Marvel set to look forward to.

One of the crazier games in the collection. It's not balanced, it's not skillful, but it's a wild ride. (Also, bonus points to anyone who gets the lyrical reference in the tag line.)
Tune in next week when we build tableaux--and ships!--in Space Base...
In Acquire-To-Zendo, Kurt is going through his favorite board games in alphabetical order. Read the explainer or see more posts.