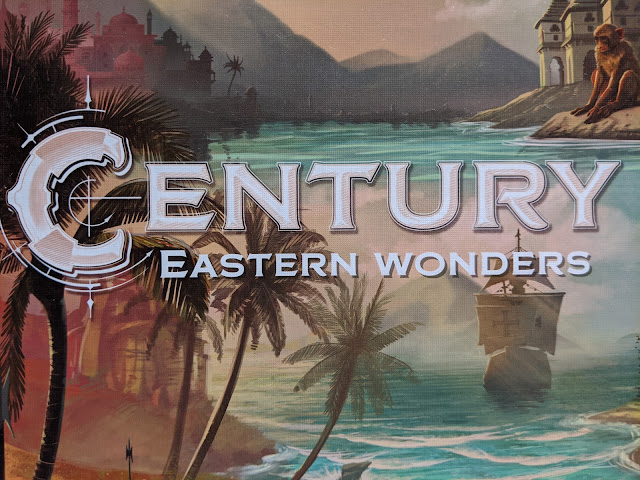 It's hard to talk about Century: Eastern Wonders without talking about the other Century games, so let's just get that out of the way. Each game is themed around trade in a given century--hence the title--and each game focuses on exchanging and upgrading four different colored cubes that represent trade goods, which can then be exchanged for points. At heart, they're all engine-builders, but each game uses a different mechanism to facilitate the building of those engines. The first game, Spice Road, is a hand management and deck-building game. The last game, A New World, is a worker-placement game. Eastern Wonders, the middle chapter, is built around grid movement and area of influence. 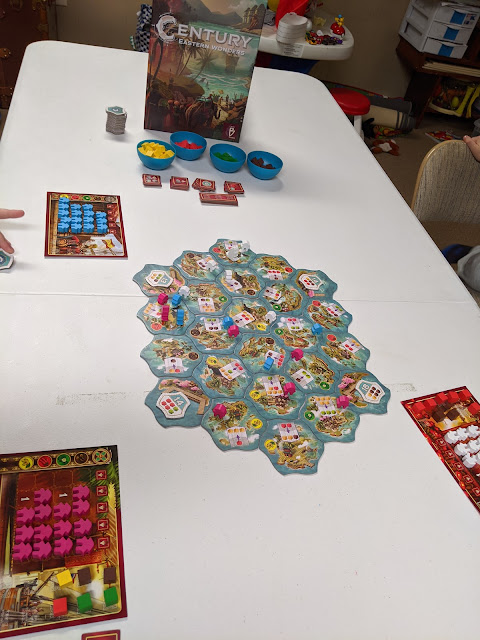 In Century: Eastern Wonders, you and one to three friends take on the roles of traders in the "Spice Islands" of Maluku, trading ginger, chili, tea, and cloves, represented by yellow, red, green, and brown cubes. (For reference, all three games use the same color cubes, but they represent different resources: Spice Road has you trading turmeric, saffron, cardamon, and cinnamon, and A New World has corn, meat, tobacco, and fur.) Over the course of the game you'll journey from island to island exchanging goods and building outposts in order to increase the value of your holdings. When you have enough, you can then go to port and ship your goods for victory points. 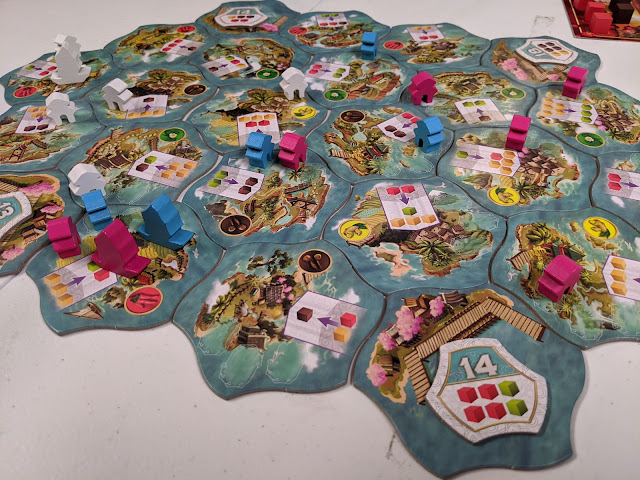 On a turn, you can move your ship to an adjacent island. If you want to move farther, or if someone else is already there, that's going to cost you some cubes. Most of the tiles are market tiles, and while you're there, you can make the trade available there. For example, in the above picture, both the blue and pink ships are on the tile that would let them trade three yellow cubes for a red and a green. But if you want to trade, you need to build an outpost first. 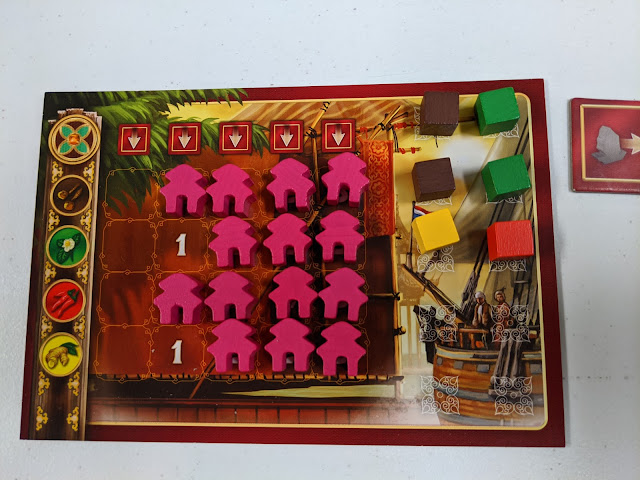 You start with twenty outposts on your player mat, and as you play through the game, you'll add them to the board. You get bonuses for building them as well. Any revealed numbers are victory points that get added to your score, and if you build an entire column (that is, one outpost of each type) you get to choose a bonus for yourself: such as extra movement, extra victory points, extra storage capacity. 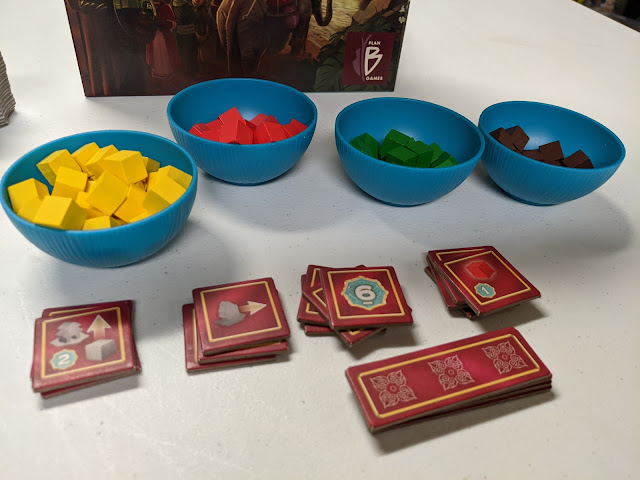 As the game progresses, you build up an engine of islands you can ferry between quickly in order to upgrade your goods and get them ready for port. By the endgame, things are going to get pretty crowded. One of the ports will close, and outposts will be more expensive to build. 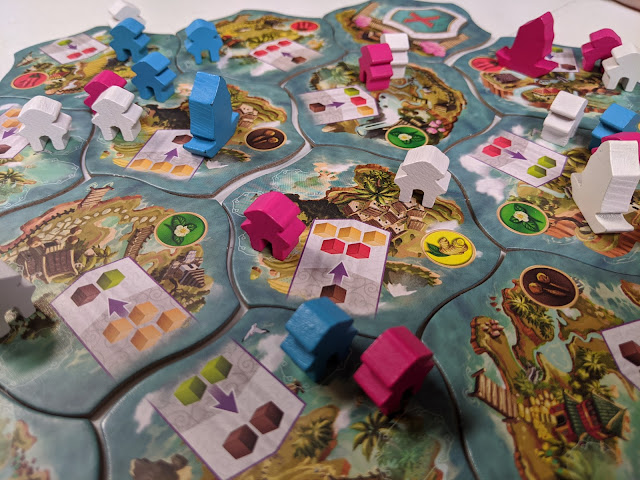 Once someone ships their goods at port for the fourth time, the round finishes and the game is over. Count up your points and whoever has the most of 'em wins.

In the classic eurogame tradition, this is a game that is simple to learn but offers a lot of strategic depth. The rules for his game fit on a single sheet, front-and-back. I play this with my kids, and they're able to grok the rules, if not necessarily the strategy. Even the five-year-old had fun moving the boat around and trading pieces. The outposts, boats, and cubes give the game a nice tactile quality.

The modular board makes for a lot of varied gameplay. Every time you set up the game you have to make an assessment of where you think you can generate an engine--something you can establish simply and cheaply without having to spend a lot of resources on movement. But you want it to be flexible because the port tiles are going to change, so you never know what kind of goal you'll be working towards in a few rounds. As such, it doesn't suffer from the engine-builder problem where you finally get an engine going and then the game is over. Rather, this game is about modifying and adjusting your engine as it goes to react to the ever-changing goals.

It's got a modular board and lots of bits, so that means set-up and tear-down get a little tedious. It's also not a very friendly game to color-blind people. Typically games that use color to differentiate resources will have also have different iconography to facilitate that. But in the Century games, it's all just cubes.

There aren't individual expansions apart from a handful of promos, but the gimmick of this trilogy of games is that they all act as expansions for each other. You can can combine any two--or all three--of them to create a new hybrid, and there are rules included for how that works. 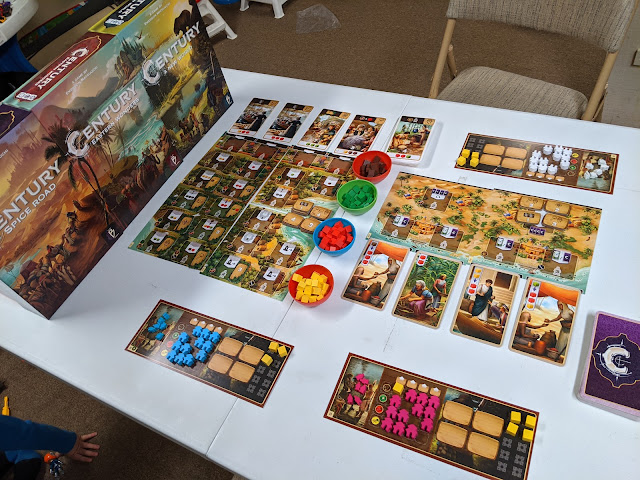 Here I set up the "East To West" game that uses all three sets. The board and player mats are from A New World, as are the cards above the board on the left side of the cubes. The cards on the right are from Spice Road. The islands and outposts are from Eastern Wonders. 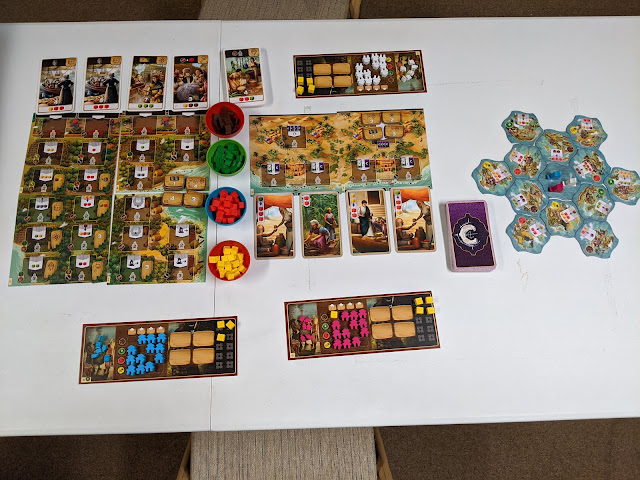 And yes, I set up the whole dang thing just so I could take pictures of it. In fact, even the box art is set up as a single continuous image.

While Eastern Wonders is my favorite, I do enjoy all three of these games. They explore other cultures and time periods without ever feeling exploitative, and there's a nice, quiet "family" vibe to the entire trilogy. And I like that it's a "barter" game that doesn't rely on negotiating with other players, which can make for a very uneven experience.

Tune in next week when we run from the evil Lord Eradikus in Clank! In! Space!...
In Acquire-To-Zendo, Kurt is going through his favorite board games in alphabetical order. Read the explainer or see more posts.

Kathy Schrenk said…
I had no idea you could put them all together like that. I've only played Spice Road but it's one of my favorite games. This one reminds me of Puerto Rico with the shipping element.
February 27, 2020 at 8:39 AM