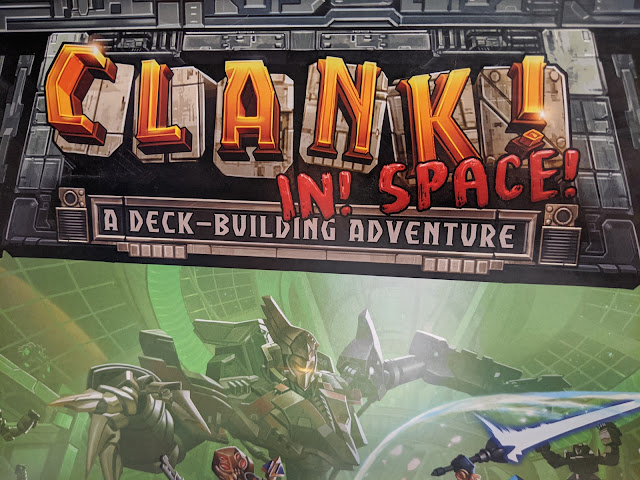 Deck-building games have grown and evolved a lot since Dominion popularized the mechanic. There are small-box deck-builders and scenario-driven deck-builders and more, but one thing that they all have in common is that they are focused on cards almost exclusively. Most deck-builders don't have a board or any concept of player movement. There are exceptions of course--AEG's Trains comes to mind, although reactions to that game are mixed. But the first one to have real success was Clank: A Deck-Building Adventure in 2016. The concept was that you are fantasy adventurers looting a cave of treasures, but while you're down there you make noise, and more noise you make, the more likely you are to be attacked by the dragon. It provided an interesting balancing mechanic. The more powerful cards weren't just more expensive, they also caused you to make more noise, putting your character in more peril. In 2017, that same design was re-skinned with a science-fiction theme and expanded with a modular board and lots of new little bits to help you along in your adventure as Clank! In! Space! 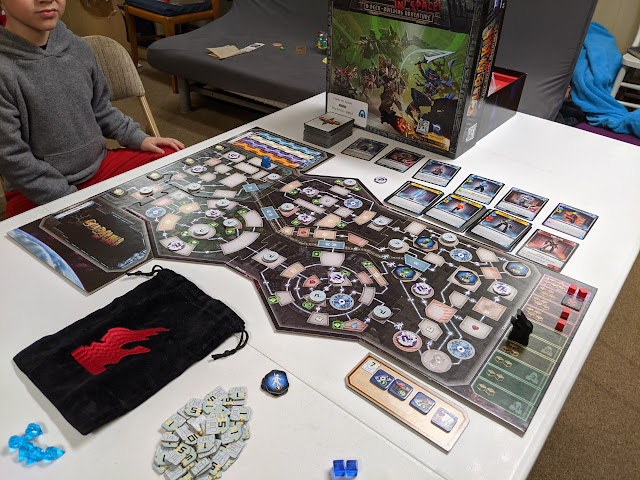 In Clank! In! Space! you and one-to-three friends take on the role of interplanetary thieves who have snuck onto the spaceship of the evil Lord Eradikus. You'll need to move around the board dodging bad guys, hacking terminals, collecting power-ups, getting through security gates, and so on and so forth. At the far end of the board is a set of treasures worth varying numbers of victory points depending on how deep into the ship they are. Your goal is to take one and escape. 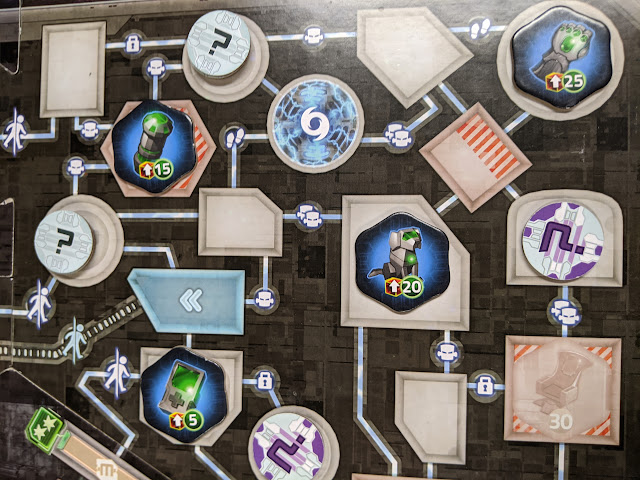 The cards you can acquire in CIS provide you with three currencies: spend, strike, and movement (I don't know if that's what they're called in the rulebook, but people who play a lot of deck-builders tend to develop their own cross-game parlance). Spend can be used to acquire new cards. Strike can be used to avoid taking damage on the board or attack enemy cards that come up. And movement is, of course, how you move through the ship. 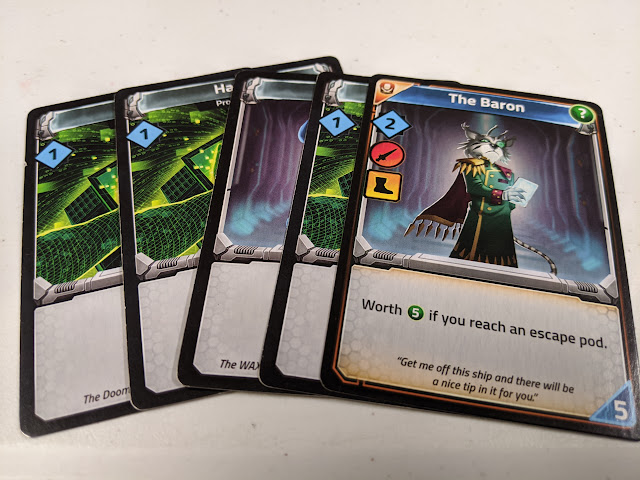 Additionally, some of the cards in your starting deck, and some that you will acquire over time, cause you to produce CLANK. That is, you've stumbled on something and made noise, drawing attention to yourself. Whenever you do that, you place a cube on the "clank" section of the board. 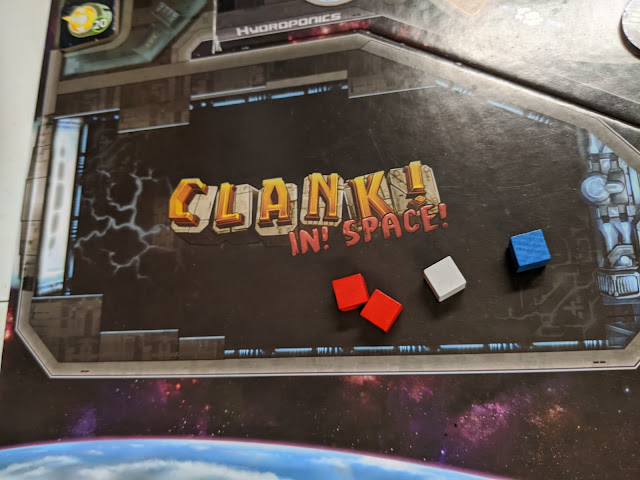 You might notice that Dr. Whiskers there has a red emblem on the right side of his card. That emblem means that Lord Eradikus will attack. When that happens, you take all of the CLANK on the board and put it into a bag, and then draw out a proscribed number. If one of yours comes out of the bag, you've been attacked and you take damage. 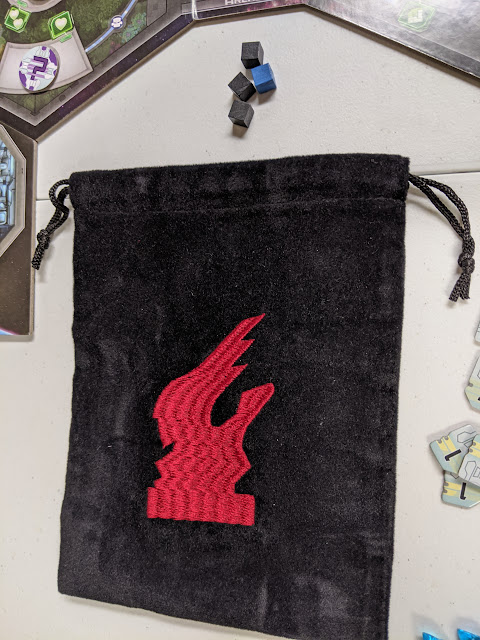 The bag is pre-populated with a bunch of black cubes that don't hurt anyone, so you can be kind of noisy early on without getting into too much trouble, but those cubes don't get returned to the bag after they're drawn, so as the game progresses, you're going to find yourself taking more and more damage for not being sneaky enough. 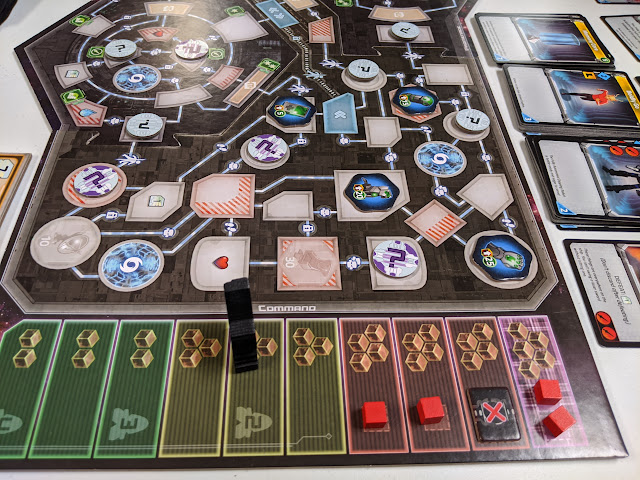 Additionally, gameplay factors will intensify Lord Eradikus's attacks, moving him up his track on the game board. The higher he gets, the more cubes get drawn for every attack, and after a while he starts adding red cubes to the bag--cubes that hurt everyone--and blocking off the path to your exit. But if you can get all the way to the escape pod, you're home free. Once a player leaves the ship, they forego future turns in lieu of attack by Lord Eradikus, so if you're the last one left, you can expect to take a lot of damage. But don't worry. If you die, you don't necessarily lose. It's assumed that if you can at least get to the cargo bay, somebody will drag your sorry butt onto a ship. You don't get the escape pod bonus, but you do get to survive. For starters, there's solid gameplay and a pretty well-tuned deck-building engine. There are factions among the characters you meet in the Adventure Deck that give each other bonuses and feel appropriately themed. The Outlaws are cheap cards that frequently let you remove CLANK from the board, steal extra resources, or sabotage other players. The Rebel cards give you extra card draw and victory points, but they also tend to produce a lot of CLANK. The science cards provide great utility and activate other cards, but there are only eleven of them in the entire game.

Also, the cards are hilarious, making references to the vast science-fiction canon. In addition to obvious sci-fi references like Star Wars and Star Trek, you can spot nods to Doctor Who, Ender's Game, Alien, Voltron, and much, much more.

There are so many pieces in this dang game. Every player has thirty cubes and two hacking tokens. There are dozens of power-ups you can acquire that need to be set out on the board. I mean, part of the appeal of an Ascension-style deck-builder is that most of your cards come from a single deck, which cuts down on set-up and tear-down compared to a fixed-market game like Dominion. Clank! In! Space! somehow has even more set-up and tear-down, between its modular board and hundreds of little bits. For this, and a few other reasons, it doesn't scale down very well. It's much more fun with three or four players than it is with two.

Also, this game takes the deck-builder model and adds a lot of bells and whistles to it, so if you were to play it without already having an understanding of how deck-builders work, the learning curve would be hella steep.

There are a couple of expansions. Apocalypse adds some new board modules, a few new cards, and some scenarios that are advanced by the black cubes that come out of the bag and make life more difficult for all the players. It adds a co-op element that. There can only be one winner, but it's possible for everyone to lose. Cyber Station 11 provides an entirely new game board that integrates with existing modules.

There's also the original Clank! with its many expansions and there's even a Legacy game now. Which I will probably never play, because I hate the idea of Legacy games.

This is a fun, weird game that provides an interesting spin on the deck-builder formula. It takes a lot of the innovations developed for Clank and improves on them.

Tune in next week when we party it up like spies in Codenames...
In Acquire-To-Zendo, Kurt is going through his favorite board games in alphabetical order. Read the explainer or see more posts.

Genius Games, LLC said…
You are giving such interesting information. It is great and beneficial info for us, I really enjoyed reading it. Thankful to you for sharing an article like this.Board Games For Kids