🌠 Star Trekking Across The Universe... 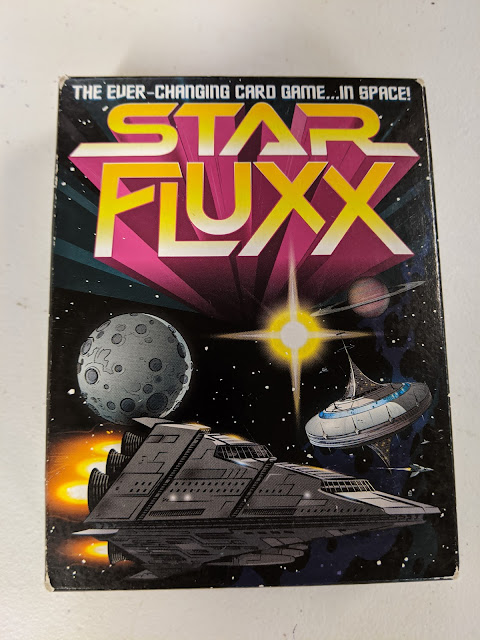 2011, 2-6 players
Complexity: light
Fluxx is a series of games from Looney Labs that are all based around the same engine and come in a variety of flavors. There's Pirate Fluxx, Zombie Fluxx, Cthulhu Fluxx, even Batman Fluxx and Firefly Fluxx. But out of all of them, Star Fluxx is my favorite. 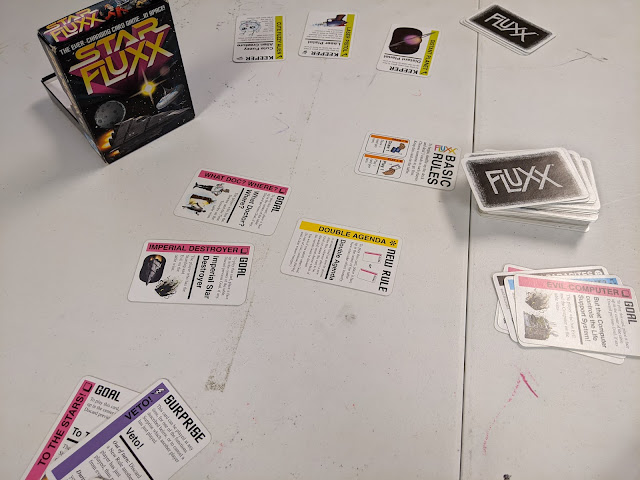 Fluxx games are all based around the same mechanic: you and one-to-five friends are trying to accomplish the game-winning goal through an ever-changing card engine with a healthy dose of "Take that!" gameplay. 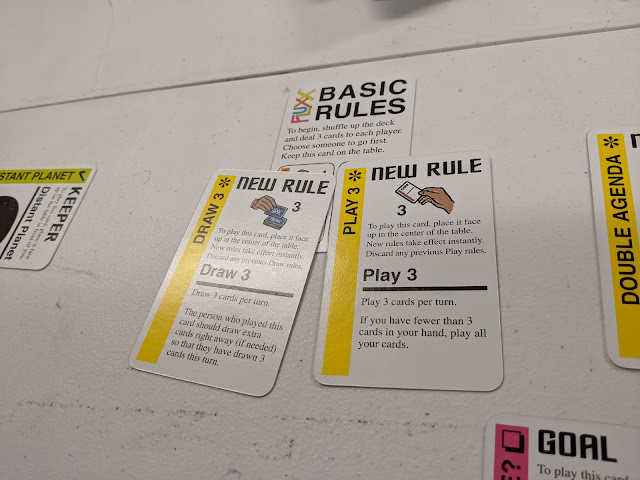 The basic rules are draw 1 card and then play 1 card, but these rules won't stay in play very long. Many of the cards you can play will allow you to play or draw extra cards, as well as a whole host of other options, such as hand-size limits, extra goals, or letting you play the top card off the deck as part of your turn. 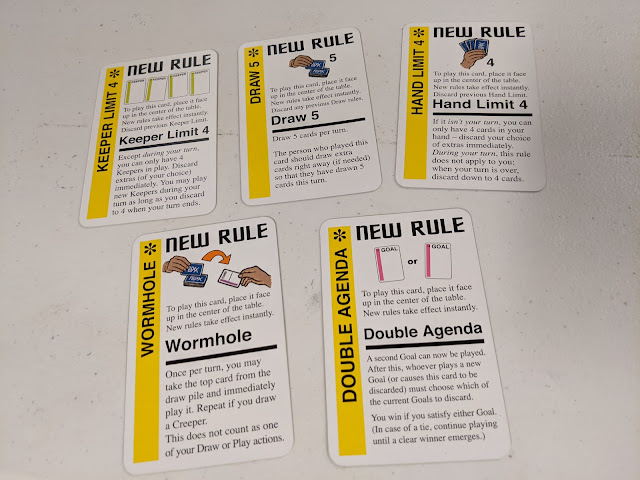 In addition to rules cards, there are goals, actions, and surprises, but the cards you're probably most interested in are the ones that you use to achieve goals, and those cards are called Keepers. This being a game called Star Fluxx, the Keeper cards are appropriately nerdily themed. 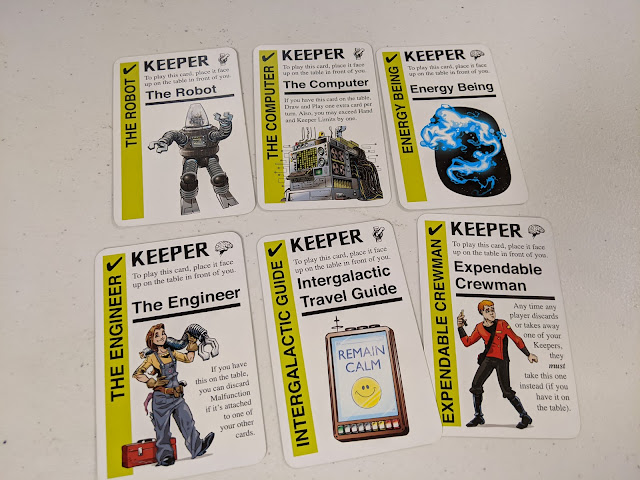 But beware the Creepers, cards that go into play as soon as you draw them. They attach to your Keepers and disable them, keeping you from winning the game! 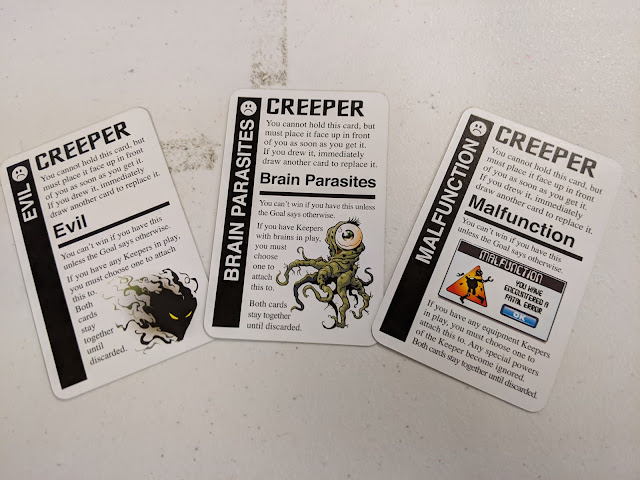 Goal cards tell you what Keepers need to be in play for someone to win. In general there can only be one Goal (there is a Rule card that allows for multiples though), and while most Goal cards cannot be achieved if you have a Creeper, there are a handful that require a Creeper, so even if you've been creeped on, that doesn't mean you're going to lose. 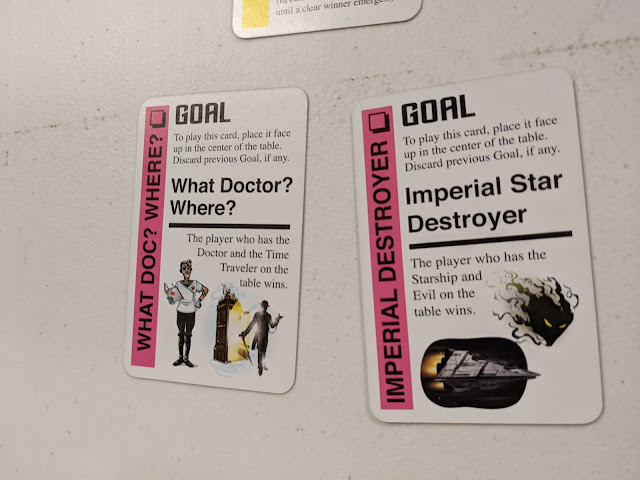 If at any point there is a Goal in play that requires the Keepers/Creepers you have in front of you, you win! 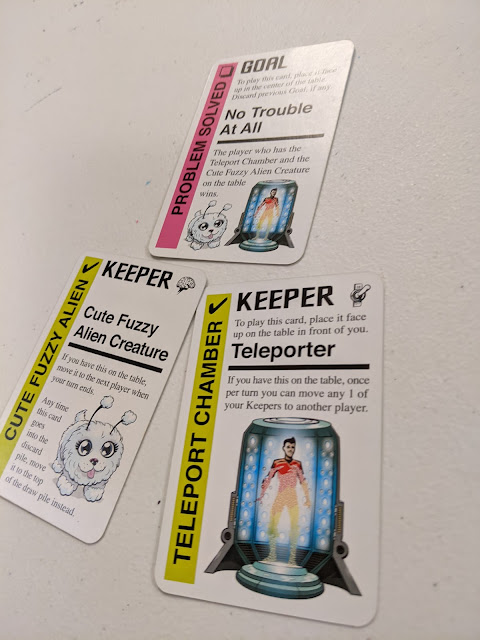 Star Fluxx is a party game. It is loud, flexible, random, and very, very funny. The cultural references hit everything from Firefly to Doctor Who to the various Star Treks to Star Wars to Lost In Space to The Hitchhiker's Guide To The Galaxy. Funnily enough, some of these properties like Doctor Who, Firefly, and multiple incarnations of Star Trek have their own dedicated Fluxx editions now, so it's fun to see them all blended together. The play is fast, it's easy to learn, and you'll have a good laugh while you play it.
Beyond that, it takes a lot of the things I like about card games and just amps them all the way up. Card games like this are variable rules engines, where part of the gameplay is tampering with the engine. This game asks "What if all of the gameplay were tampering with the engine?" and just runs with it.

It's a very chaotic game, which makes strategy all but impossible. This drives some players utterly mad. So be aware going in that you're playing 100% reactively, because the rules change quickly and sometimes arbitrarily. It can be very frustrating. It also doesn't scale that cleanly. When you get up above four or so players, the game can drag on a bit because of everyone messing with everyone else.

There are a couple of promo cards that you can shuffle in, but no proper expansions. Each Fluxx is its own animal, and a lot of them tweak the game engine in very interesting ways. Zombie Fluxx has a lot of Creepers (surprise, they're zombies) and a number of weapons that you can use to get rid of them. Firefly Fluxx has a lot of cards that can steal cards from other players, so winning is usually about chaining those steals the best way to achieve the goal, almost like you were pulling off a heist. Monty Python Fluxx is another favorite, which is mostly built around acting silly.

It's a goofy, fun party game that embraces its own chaos.
Tune in next week when we feed the Emperor's panda in Takenoko...
In Acquire-To-Zendo, Kurt is going through his favorite board games in alphabetical order. Read the explainer or see more posts.