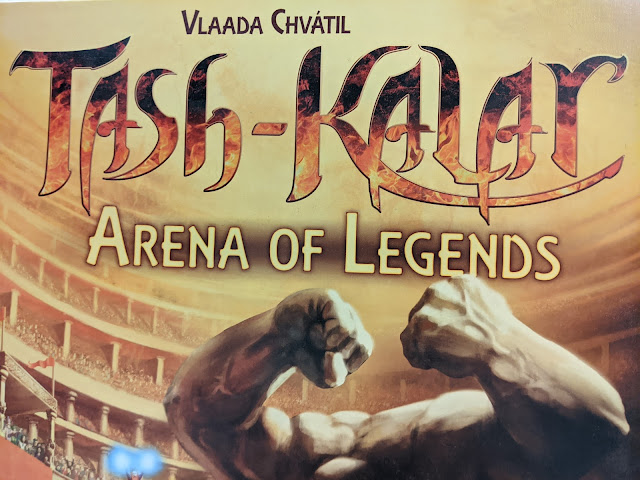 2013, 2-4 players
Complexity: medium
Mages gather in the arena to summon their servants to do battle with one another. This is a card-based dueling game in the tradition of Magic: The Gathering, but unlike MTG, this is a fixed-deck game that relies on pattern matching and spatial logic in order to win. 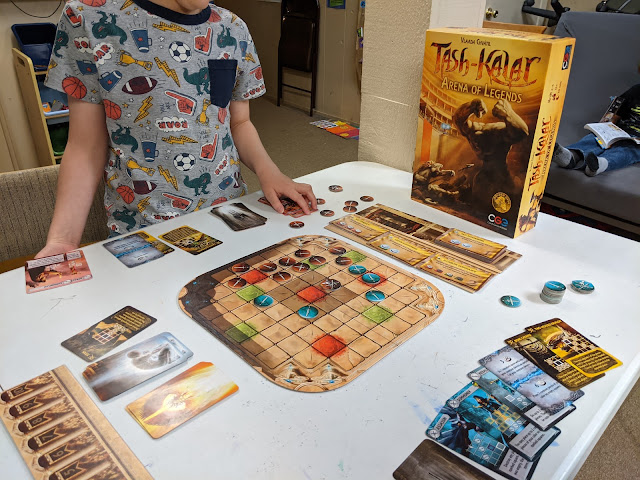 In Tash-Kalar: Arena Of Legends, you and your opponent face off against one another (technically there are rules for three and four players, but this is intended to be a two-player game) in the arena. Each player takes a pre-built deck of cards and draws three of them into their hand. Each player also draws two cards from a common "Legendary" deck and one from a common "Flare" deck, making a hand of six cards. 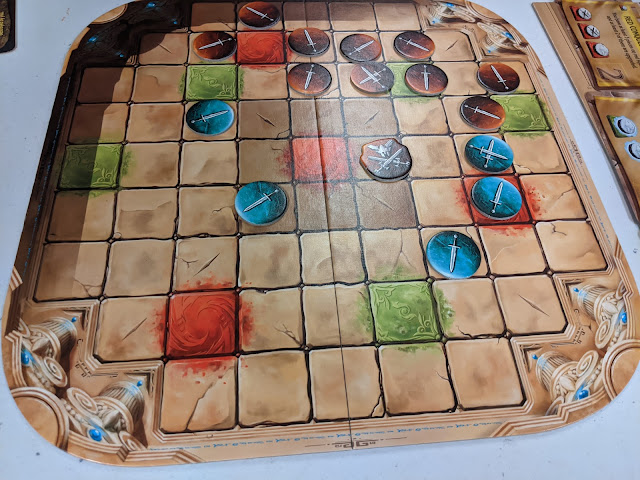 On your turn, you will perform two actions. The most common will be to place on of your tokens on the board, but you can also use tokens you have in play in conjunction with the cards in your hand to perform summonings. 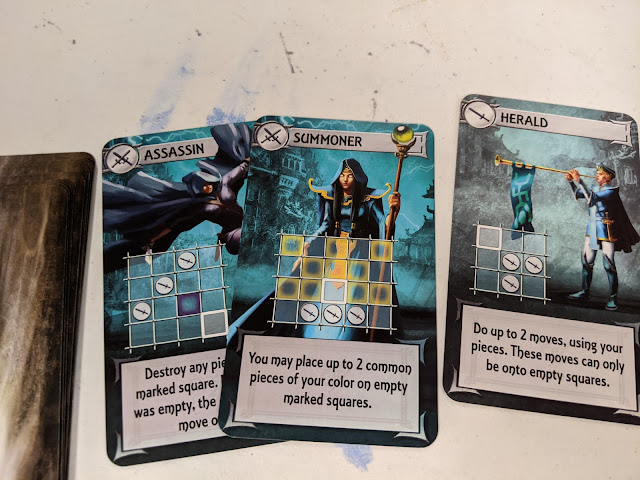 Summonings can be played if you have the matching configuration of tokens on the the board, and these will allow you to play upgraded pieces, upgrade and move your other tokens, as well as attack those of your opponent. 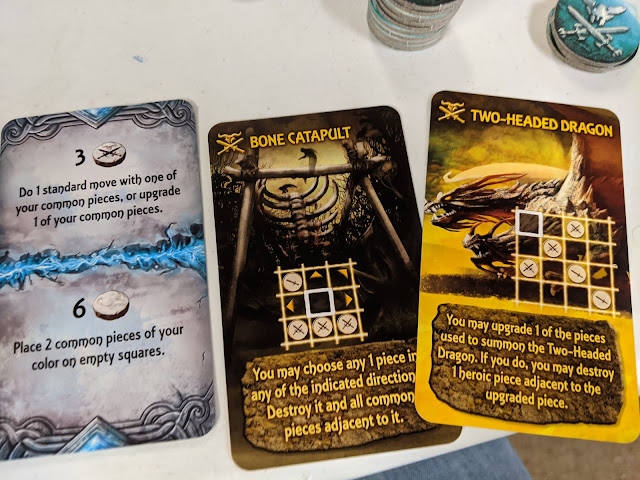 As you get more advanced pieces on the table, you can perform the more powerful summonings from the Legendary cards in your hand. If you get too far behind, you can invoke a Flare card in order to catch up to your opponent. 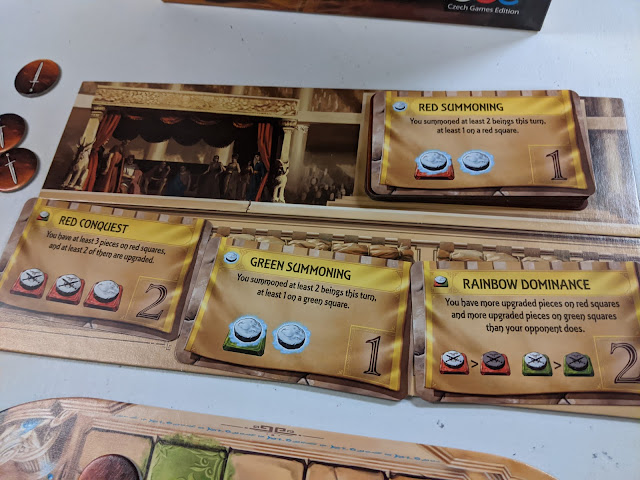 There are a few different modes of play and which one you are in will determine how you score points. In "High Form" you are trying to impress the judges by performing Tasks. In "Deathmatch Duel", you simply get points for destroying opposing pieces and performing Legendary Summonings. 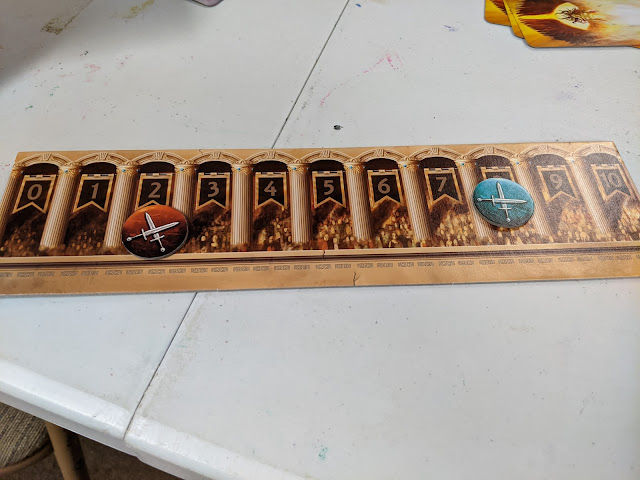 The game ends when one player empties their deck or when a proscribed number of points are earned: 9 for High Form, 18 for Deathmatch. Points are then added for pieces in play and whoever has the highest score wins. 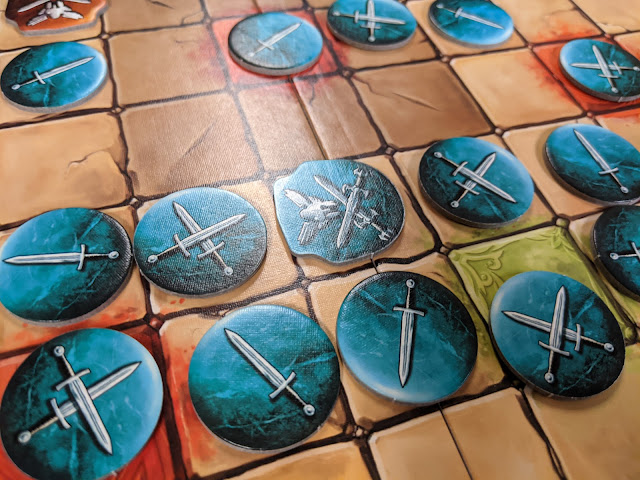 I usually just refer to this as Nerd Checkers. For a game that open-handedly lifts its theming from MTG, it does a remarkable job of distancing itself through gameplay--much more so than some other clones of MTG I could mention (looking at you, KeyForge). You don't know what your opponent has in hand, although the pool of cards they're playing from can be known, so you aren't trying to disrupt their specific formations so much as just... disrupt them broadly while picking out spots to put your summonings where they'll be the most effective.
The art is pretty excellent, and the gameplay is unlike anything I've run across before in a dueling game. It plays quickly-ish (though not in the 30 minutes that the box claims) and the learning curve is a lot less steep that in seems like it would be. I played this with my 9-year-old, and he came back and beat me during our second game.

The theming is awfully generic-fantasy, and if spatial reasoning isn't your strong suit, then this one is going to frustrate you.
Certain aspects of gameplay are a bit counter-intuitive. For instance, you can only move tokens via card effect--which can mean a couple of different things in context. A "standard move" can destroy an enemy piece of lower rank, but a "combat move" can destroy an enemy piece of equal or lower rank. But then when you run out of tokens, you can just remove one from the board to replace it, meaning you can effectively move it as an action but only to an empty square and only if all of your pieces are in play.
The multiple modes of play is a weird add-on as well, especially since they each use their own scoreboard. But then, they aren't that different so it kind of feels pointless to have them. And the rulebook lays things out rather clumsily, assigning the specific rules for different forms to blocks of color-coded text rather than just grouping them together.
Finally, the base game only comes with four decks, two of which are identical, so there's not a lot of variety right out of the box.

There are three expansions, each of which add another faction with a unique theme: Everfrost, Nethervoid, and Etherweave. All are well-regarded among fans of the game.

MTG + Go with some Shannara for flavoring.
Tune in next week for little wooden kaiju mayhem in Terror In Meeple City...
In Acquire-To-Zendo, Kurt is going through his favorite board games in alphabetical order. Read the explainer or see more posts.