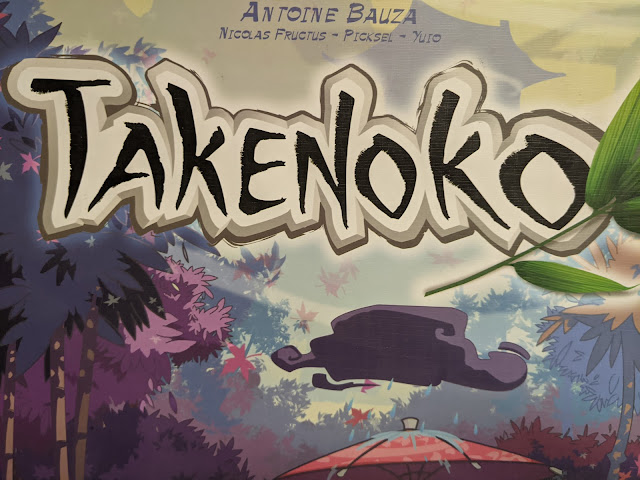 2011, 2-4 players
Complexity: light
Long ago the Emperor of Japan received a panda as a symbolic gift of peace from the Emperor of China. It was a powerful gesture. It was also a bit of a pain to care for, so the Emperor tasked his courtiers with managing it. 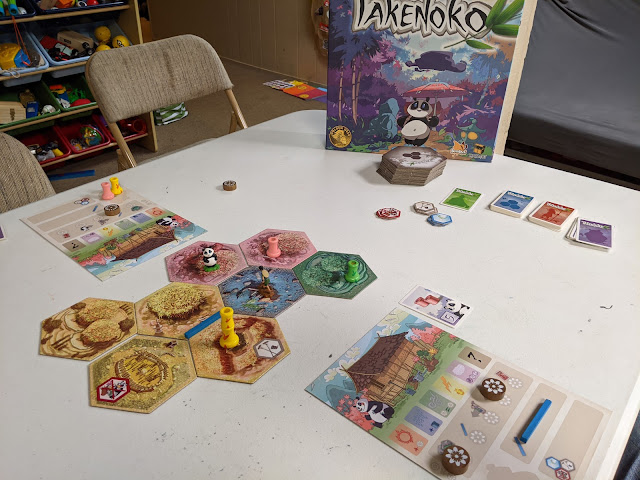 In Takenoko, you and one to three friends will take on the role of courtiers to the Japanese Emperor and are seeking to win his favor by cultivating the most pleasing garden while also keeping his new pet panda happy. The board consists of a number of pink, green, and yellow hex tiles surrounding a central pond. Any tile that is watered will grow bamboo of the same color--tiles that are adjacent to the pond will automatically grow, but anything farther out will need to be irrigated. Some tiles have a marker indicating that they are self-watering, can't be eaten from, or fertilized. There are also figures for the panda and gardener that can move around the board at the players' direction. 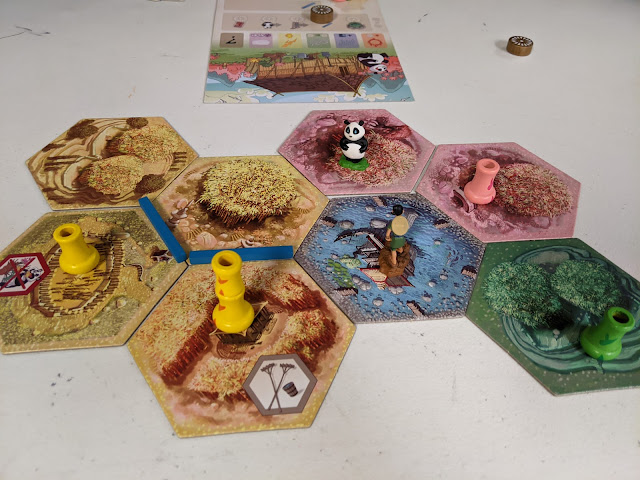 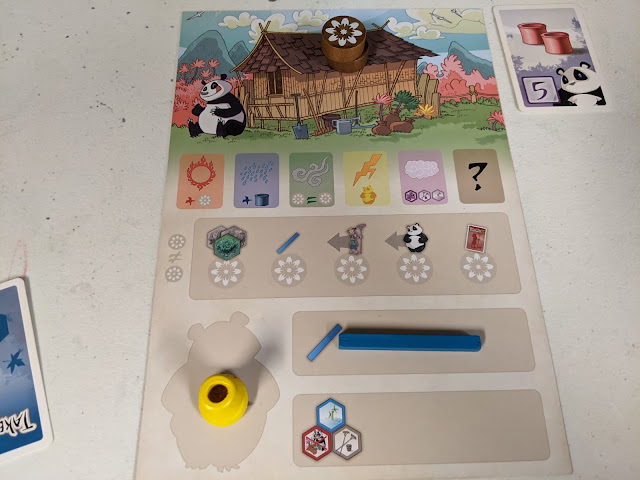 On turns past the first, you also roll a weather die that gives you a bonus. The faces will allow you to take an extra action, water any one tile, repeat an action, move the panda anywhere, or take a tile marker to make it self-watering, fertilized, or panda-proof. 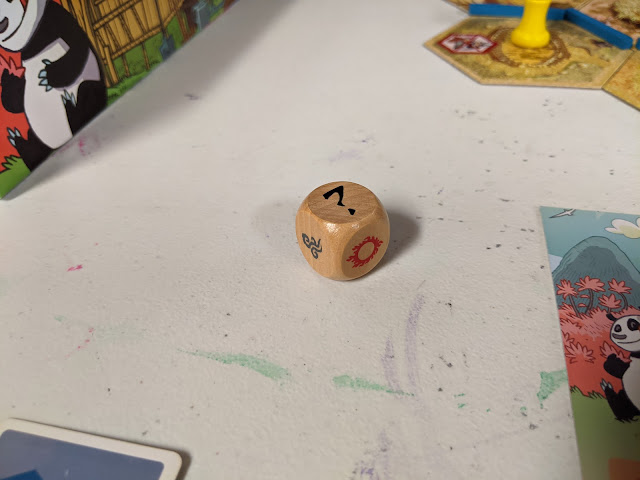 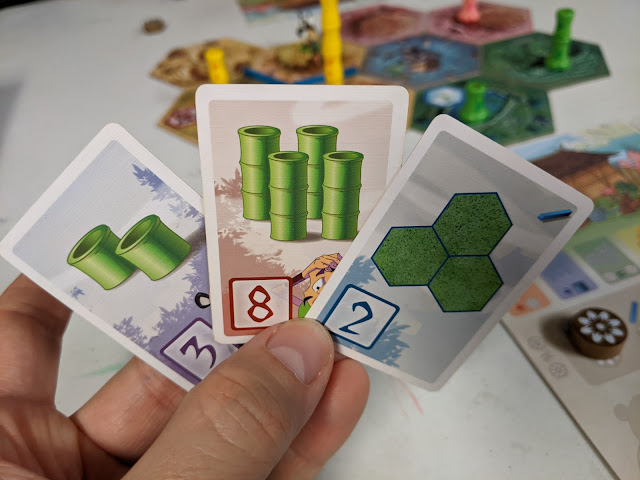 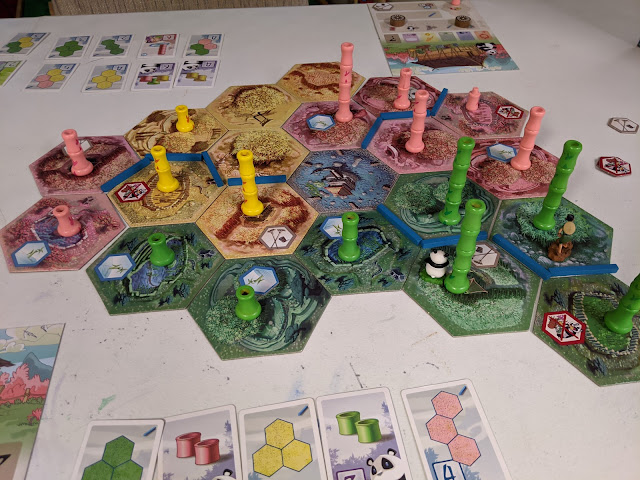 As the game progresses, the board will get larger and more complex. Once someone plays their seventh, eight, or ninth (depending on whether it's a 4, 3, or 2-player game respectively), the end of the game is triggered. That player gains the "Emperor Card" which is itself worth 2 points and everyone else gets one last turn. 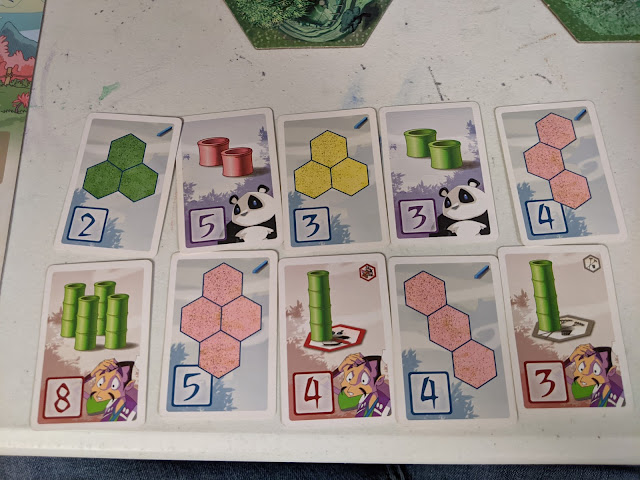 Everyone tallies up their point totals and the player with the highest score wins. But, of course, the real winner in all of this... 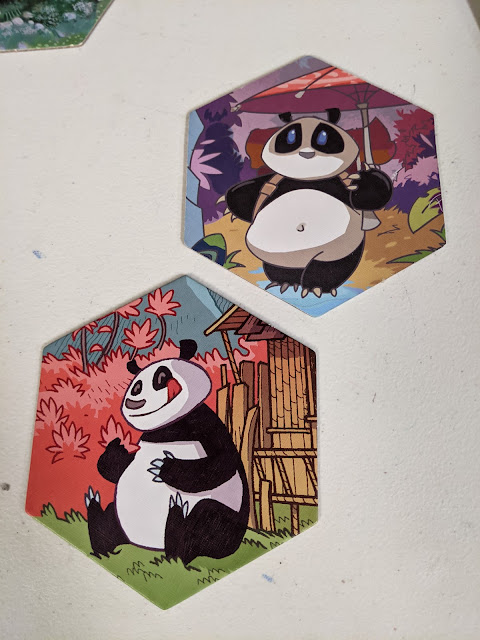 Takenoko is a straightforward eurostyle family-weight game with adorable art and very accessible gameplay. It is currently my 6-year-old's favorite game. The components are very cool, and the wooden die and bamboo pieces have a nice tactile quality. The miniatures are nice and detailed (and painted!) and the whole presentation is just very pleasant. It even has a little comic on the front page of the rulebook that gives the backstory for the game. It's competitive without ever feeling mean, and there's some good strategy to be found in hunting down synergies between objectives while making the best use of the tiles and cards you draw.

In the end-game, landscape objectives become a gimme for extra points. I've seen more than one game where the final win came down to people on their last turn flopping a landscape card and either winning or losing because that tile orientation was or was not already there on the table. So that feels kind of random. The bamboo pieces are not the most stable things in the world, so they're prone to getting knocked over if you're playing with--say--a 6-year-old who bumps the table a lot. I also wouldn't mind a little more differentiation between the player mats. Each one has a specific design that matches the tokens you use to mark off your actions. They're very easy to confuse with one another, although this doesn't actually affect gameplay at all, so it's a minor quibble.

There is a Chibis expansion that adds baby pandas, so I'm pretty sure the cuteness factor just explodes. But I haven't actually played it, so I can't speak to gameplay.

Takenoko is a longtime favorite in our house, and it's come out at many a game night. It's light, fun, and adorable.
Tune in next week for an arena of spellcasting in Tash-Kalar: Arena Of Legends...
In Acquire-To-Zendo, Kurt is going through his favorite board games in alphabetical order. Read the explainer or see more posts.