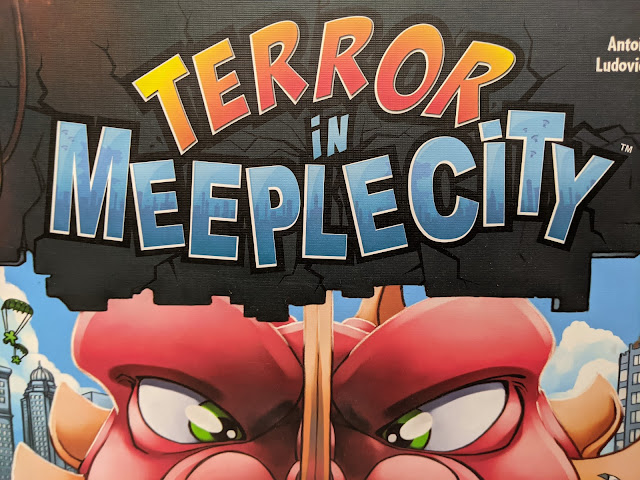 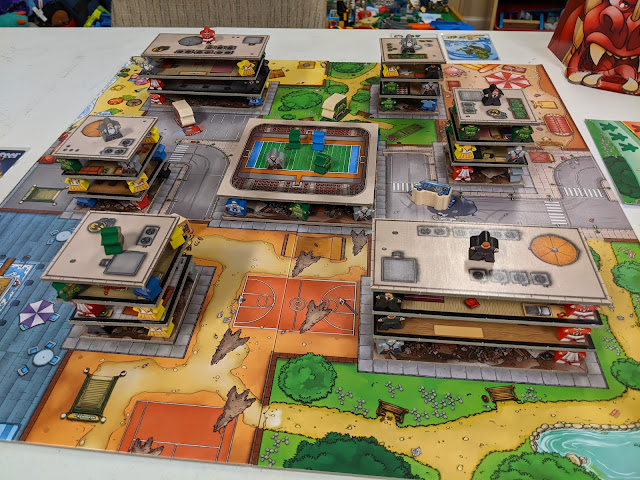 In Terror In Meeple City, you and one to three friends take on the role of monsters who have converged on Meeple City in order to destroy its buildings and devour its citizens. Each monster has a screen that looks like a face with six teeth, four of which are removable. Your monster token has two parts: a base--it's "paws"--and a body. 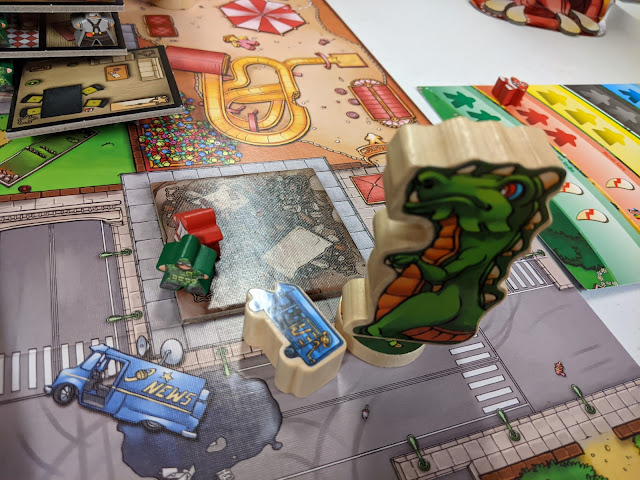 On your turn, you take two actions. Your options are:
Then you reap your rewards. 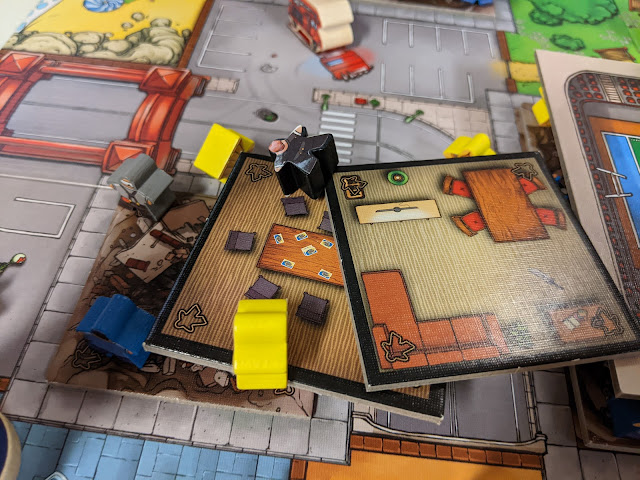 Any floors that don't have meeples on them go behind your screen--read: into your stomach. If you knock over another monster, you take one of their teeth. Then you can eat meeples that are in your neighborhood, so long as they aren't holding up a floor. You can eat as many meeples as you have teeth left. 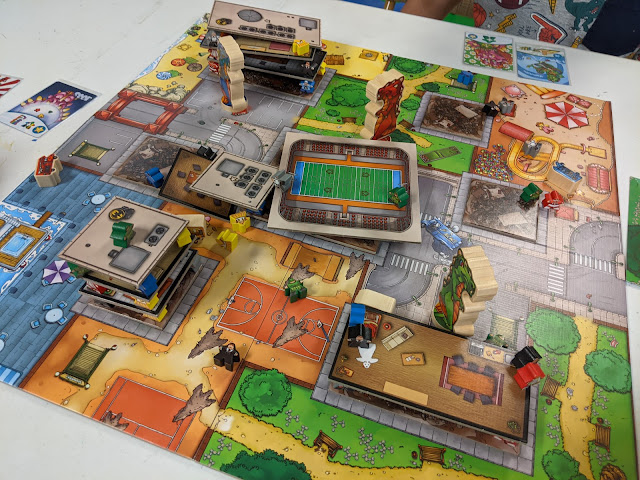 As the game progresses, the city will be more and more demolished. And the players will have fewer and fewer teeth. Each player also gets three cards. They get a Power that can augment their gameplay--e.g., the ability to attack things by flicking your paws at them. They get a Identity that affects scoring--e.g., ten points if you have the most blue meeples. They also get a Super Secret Power that is able to be used once for an instant bonus. 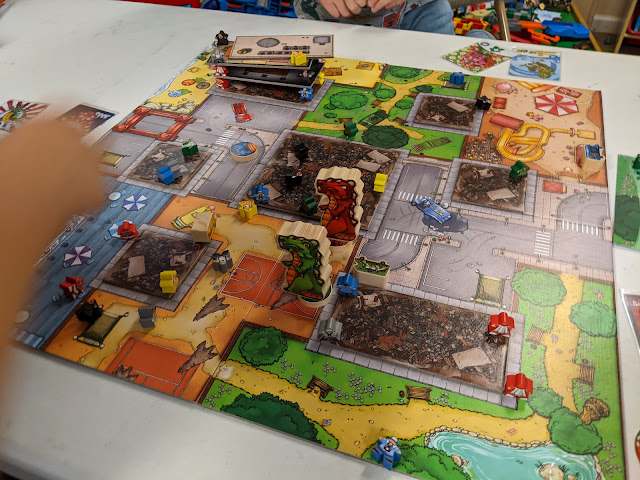 If Meeples go off the board, then they go onto an "Escape Track" that will penalize the players. Once the board is clear of buildings--or the monsters have run out of removable teeth, the end of the game is triggered and everyone gets a final turn. You get a point for every floor tile in your stomach, two points for every tooth, ten points for every complete set of a meeples--where a set is one of each color--and any points from your Identity card. The monster with the most points wins. 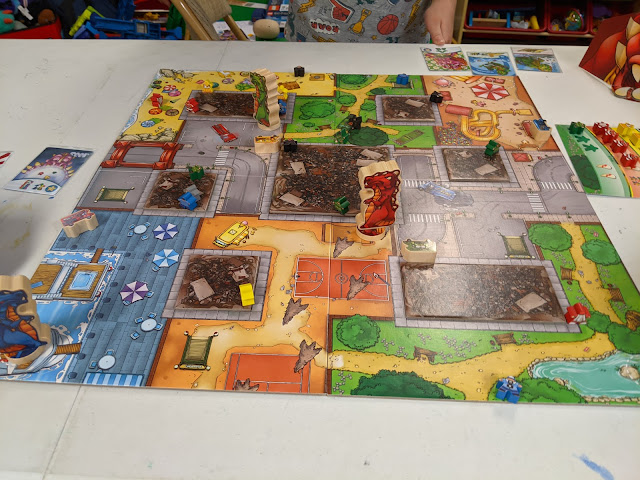 I mean... what's not to like about destroying a city and occasionally throwing vehicles at each other? It's haphazard and chaotic in the best of ways, in such a way that the scoring starts to feel a little arbitrary but you don't really care. The floor tiles are all double-sided, which means the city never ends up being constructed quite the same way. And the board is littered with dumb little pop cultural references. There's the Hover-board from Back To The Future II... 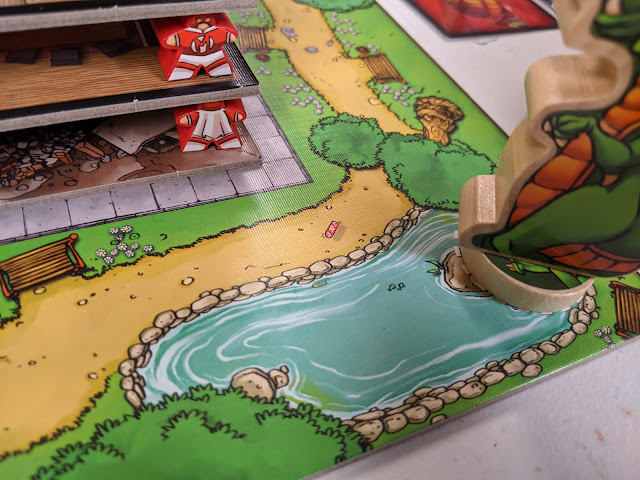 Multiple roofs have the bat-signal on them... 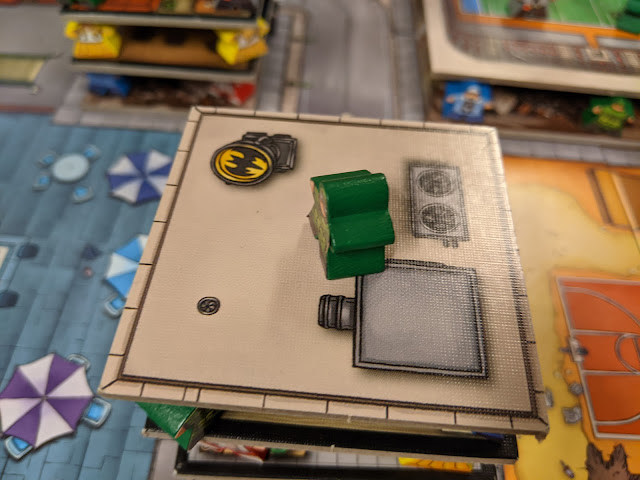 Captain America's shield was left in a park... 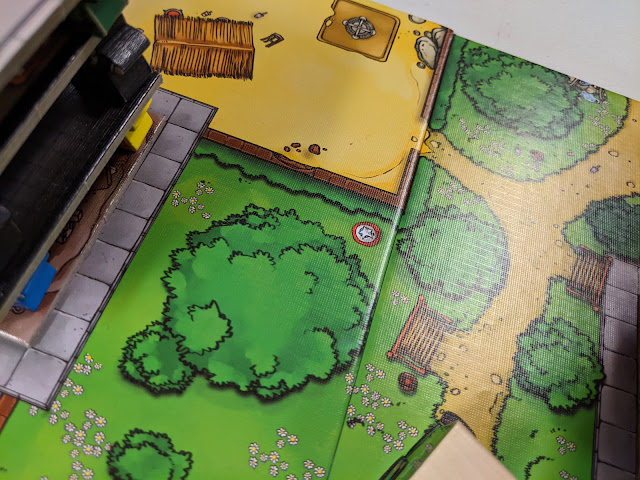 There's even a ninja turtle poking his head out of a manhole... 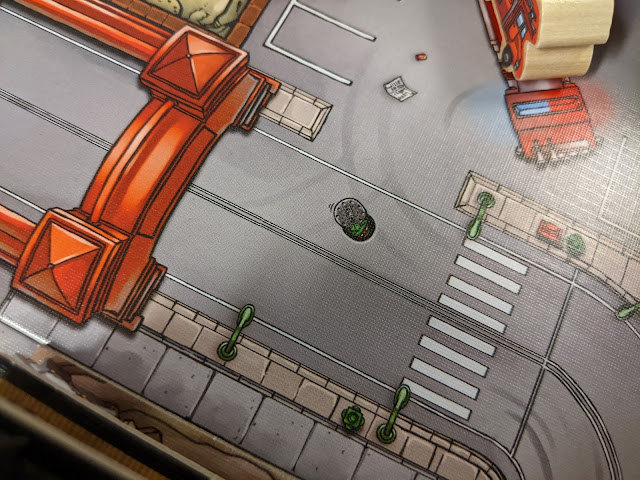 There's more. I'm hardly surprised that litigation happened forcing the game to change its name. I'm kind of surprised the game makers haven't been sued more than that, to be completely honest.

For starters, it's a dexterity game, so not everyone is going to love that. Plus, it's a lot of work to set up the city that you're going to destroy. There are a few inconsistencies with the pieces. The meeple stickers don't stay on very well, and the central ruin that holds the board together is prone to coming unglued. Seriously, I've played this game with two different sets and they both suffered from that exact problem. It's nothing that can't be fixed with a little superglue, though.
But the biggest issue with this game is probably one of representation. Having a city populated by a colorful assortment of meeples is great, but it includes stickers to make them more detailed, and in the presence of the stickers the citizens of Meeple City become all white and mostly dudes. Sigh. The black meeples are white dudes in business suits. The green are white dudes in army fatigues. The only female characters are the yellows, who are blondes in cheerleading outfits. Sigh again. I don't mean to make it a big deal, but this game came out in 2013, so this is a thing you have to just be better about about these days.

There is a single promo expansion that adds a new Escape Track and a special Secret Power.

This game definitely gets filed under "Games that are really toys." It's a cathartic, chaotic good time.
Tune in next week when we get our tickets punched in Ticket To Ride...
In Acquire-To-Zendo, Kurt is going through his favorite board games in alphabetical order. Read the explainer or see more posts.