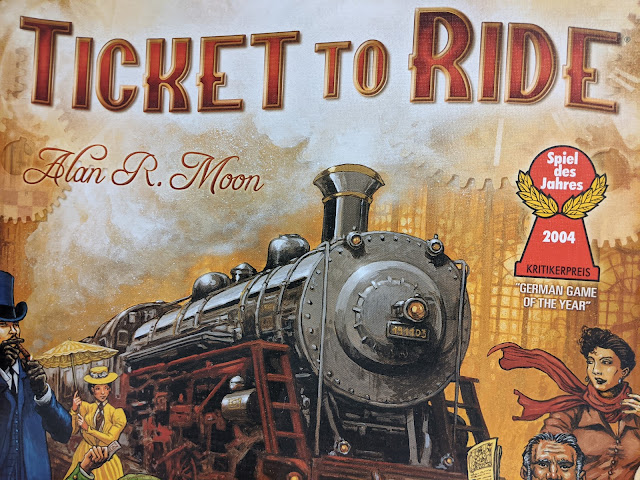 2004, 2-5 players
Complexity: light/moderate
Ticket To Ride is one of the games at the vanguard of the modern gaming renaissance. It's a wildly popular eurostyle game that is easily accessible to both children and adults. And it's about trains, so it's automatically populate with the old-man/little-boy set. 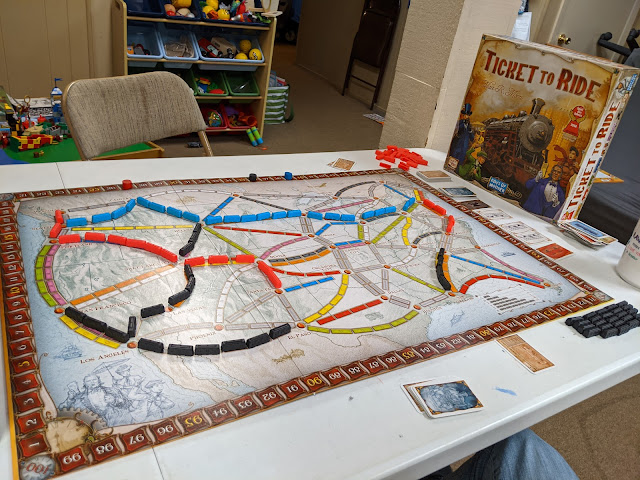 In Ticket To Ride, you and one-to-four friends are developers building railroad lines during the US railway expansion boom. Each player gets 45 trains in their color, two to three tickets to try and fulfill, and a hand of train cards. 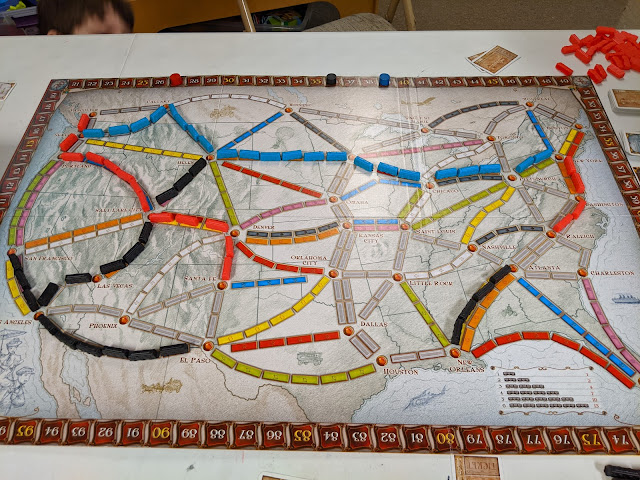 On your turn, you take one action. Your first option is to take cards. There is a row of five cards, and you can take two of them--although if you take a wild card, that is the only one you can take. For either of your card draws, you can choose to take a card blindly from the top of the deck. Cards in the row are immediately replaced, and if there are ever three or more wilds in that row, then you discard them all and re-deal. 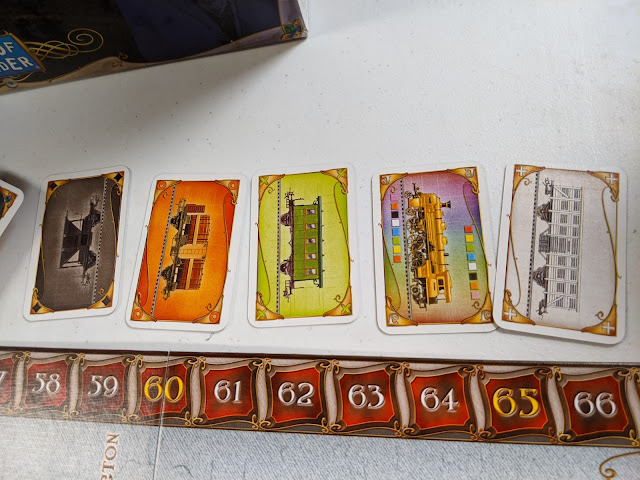 Your second option is to play cards from your hand to claim a route. You need to match the color and number of the route in order to claim it. If you want to claim the route from San Francisco to Salt Like City, you need to discard either five orange cards or five white. When you claim a route, you gain points. Some routes have multiple ways to score them. In a two or three player game, only one player may claim any specific route, but in a four or five player games, both sides of the route are available. 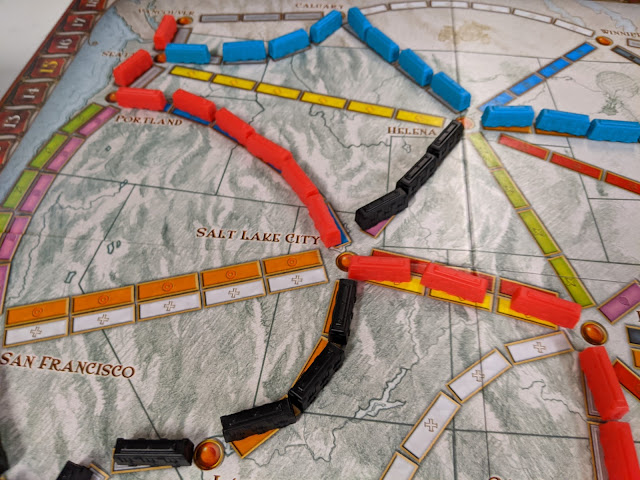 Your final option is to take more tickets. A ticket gives you points for connection multiple cities. When you take tickets, you draw three and keep at least one of them. Be careful, because any tickets you don't successfully complete at the end of the game will cost you points. 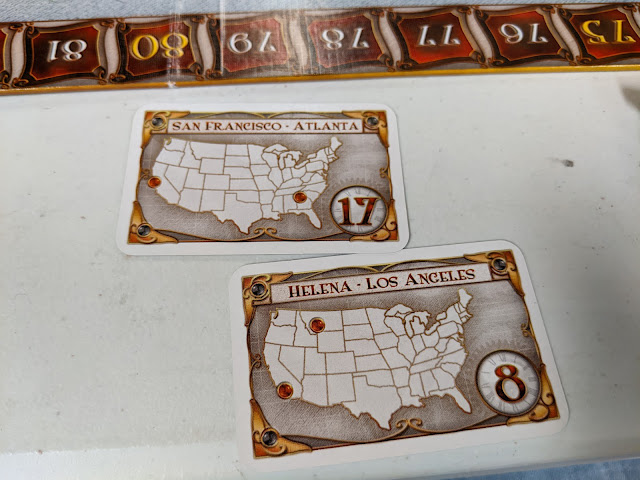 Once a player is down to two or fewer of their 45 trains, the final round of the game starts. Each player gets one last turn. Then all players tally up their scores from their tickets. The player with the longest contiguous route gets a bonus ten points. Whichever player has the highest score wins. 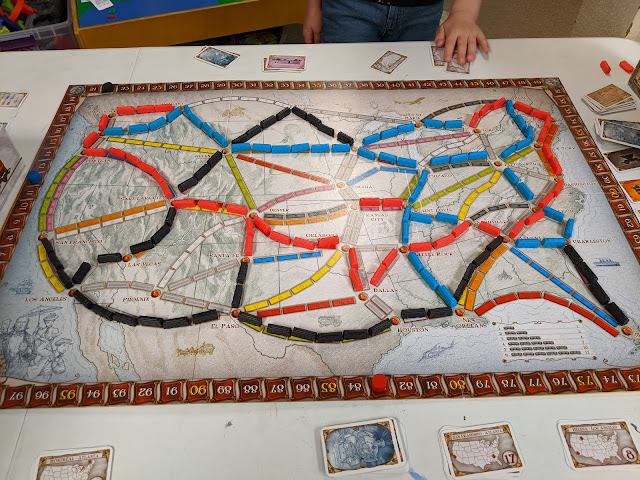 This one hits all of the eurogame sweet spots. It's easy to learn, easy to teach, fast-paced, and friendly. The little trains are pretty cool, and the map is nicely detailed. Not much to say about it other than that. It's a popular game because it's actually a lot of fun for a lot of people. 'Nuff said.

The board is huge, meaning this game has a pretty hefty footprint. Not only does it have the big board, everyone starts with forty-five trains in their play area. The cards that that come with it are eurostyle, which in the case of cards means really tiny. And if you're gunning for the long tracks, then you're very likely to wind up with a hand of twenty-plus cards. It can get to be a bit much.
It's a game where jostling the table can scuttle the entire thing. When the game was featured on Wil Wheaton's TableTop YouTube show, someone bumped the table pretty hard and obliterated the board. If they hadn't been filming the entire game, they would not have been able to recover it. Beyond that, the gameplay isn't very varied from game to game, so if you're looking for variety, you aren't going to find it here.

There's a ton of content for this game, mostly in the form of new maps that tweak the formula by adding in tunnels or stations or ferries, or something like that. I've played a few of them and not found any of them to be essential. The one expansion that I heartily recommend is the USA 1910 Expansion Pack. It's a set of cards--standard size cards, not tiny eurostyle--that replace the train cards and tickets, as well as adds a few more tickets and adjusts values on the old ones. With the new tickets come a few different game options that can make the game more open or more cutthroat, depending on which tickets you include.

Kind of a modern classic, gaming-wise, and its status is well-earned. Choo-choo!
Tune in next week when we create some Tiny Towns...
In Acquire-To-Zendo, Kurt is going through his favorite board games in alphabetical order. Read the explainer or see more posts.