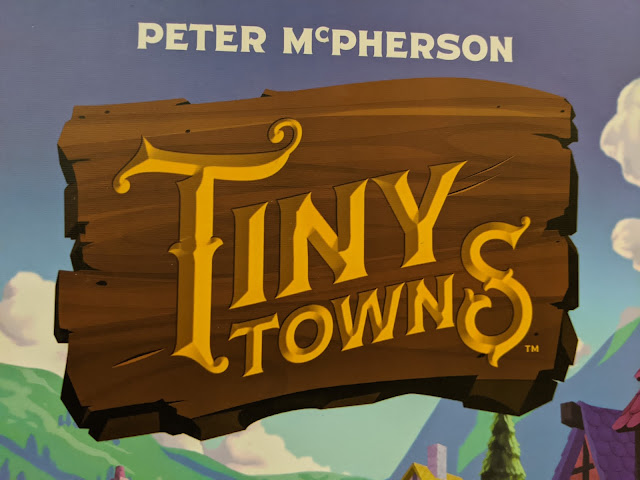 2019, 1-6 players
Complexity: moderate
You are the mayor of a town of small woodland creatures, and you've found a patch of land to develop. Now it's up to you to turn it into a bountiful little burg that is safe from predators. 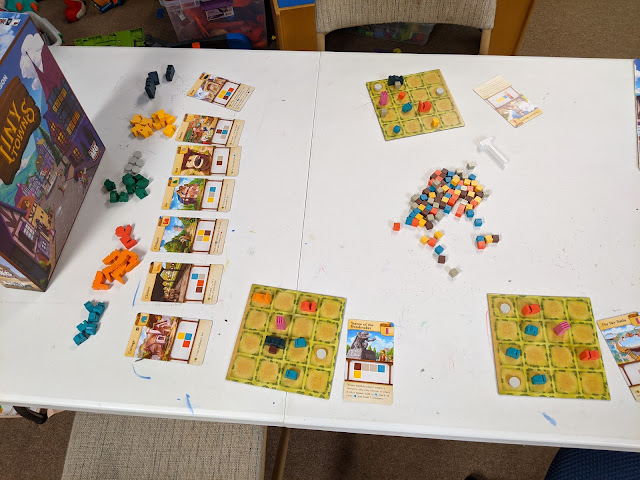 In Tiny Towns, you and up to five friends will take turns naming resources and using them to flesh out the 4x4 grid in front of you. 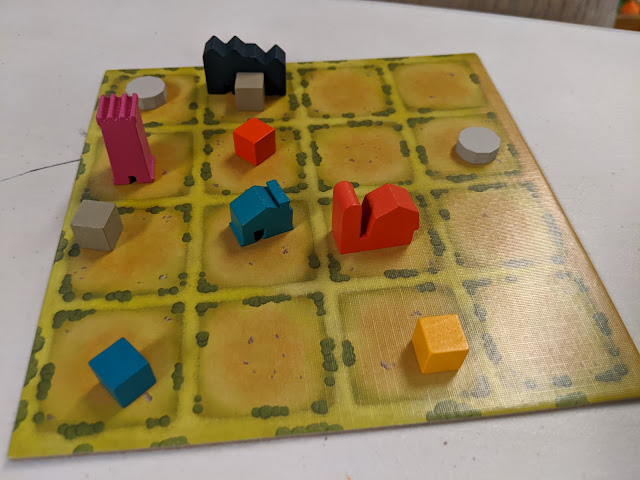 Each player will take a turn as the Master Builder. That player calls out a resource and each player must take a cube of that color and place it on their board. You must place it, and you cannot move it once it has been placed. Each player may then build--taking cubes from their board and replacing them with a building whose pattern they have matched. "Matching" is loose--the arrangement on your board can be rotated or mirrored from what's on the card and still count. The newly-placed building only takes up one space, so building things frees up squares on your board, allowing you to place more cubes and build more buildings. 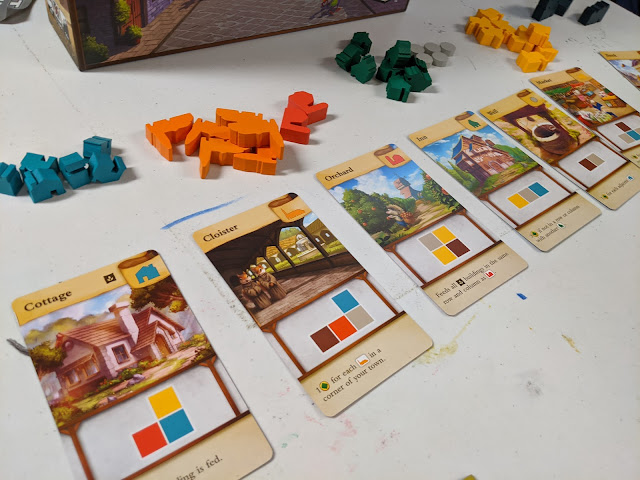 Every building has a unique way in which it contributes to your score. A cottage is worth three points, but only if it's fed by a farm-type card, like the orchard pictured above. Wells are worth one point per adjacent cottage. Inns are worth two points, but only if there aren't any other inns in the same row or column. And so forth. Players are working from a common pool of buildings, although the exact composition will change every game, as there are several different buildings of each type, apart from the cottage. 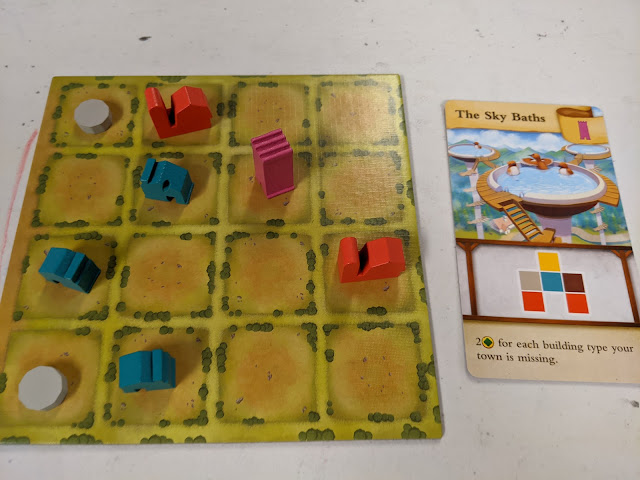 Additionally, each player has a unique monument card that only they can build. This card remains secret until constructed and will confer a sizable benefit. Eventually you will run out of space on your board and be unable to keep playing. Once that happens, you drop out of the game. When all players are unable to continue, the game is over. Everyone tallies up the points from their buildings and subtracts a point for each space that does not contain a building. The real-estate developer with the highest score wins. 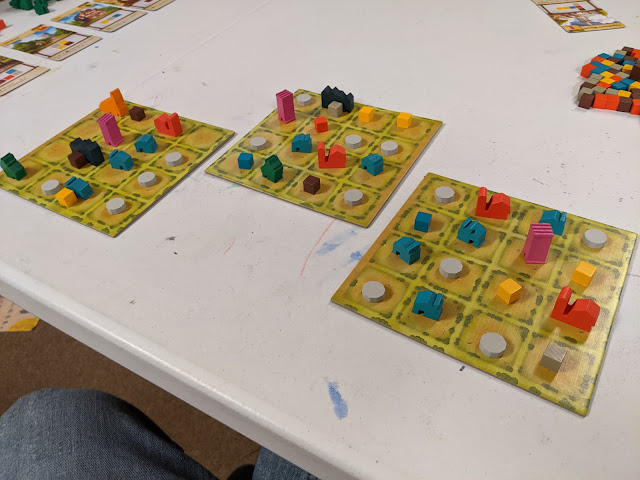 AEG is kind of notorious for taking a simple game mechanic and then just blowing it up by filling the game with all sorts of permutations and complexity. With Tiny Towns they seem to have resisted this. While the changing building cards and monuments do add some complexity, the fundamentals of the game are very grokkable. You're adding pieces to your board in order to build buildings, aiming to maximize points and minimize waste in an environment where you don't have a ton of control over what pieces are going to come out next. In a way, it's kind of a spiritual hybrid of 2048 and Tetris.
The components are pretty nice. I like the wooden buildings, which are identifiable by both shape and color. The art on the cards is lovely, and the player boards are pretty hefty. This game also has a dedicated solitaire mode that uses a small deck of cards to help randomize what materials come into play--and it can be used to add a little challenge to a lower player-count game. Because most of the action happens simultaneously, you don't have a ton of downtime, which is another bonus.

This relies pretty heavily on spatial reasoning, so if you don't care for that, you're not going to love this game. The cubes are a little dull in color, and I feel like they're not terribly friendly to color-blind players.

There are two expansions out as of now: Fortunes adds a money mechanic that allows you to ditch unwanted resources at the cost of victory points, and it's definitely worth picking up. There's a micro-expansion called Tiny Trees that allows you to plant a seed and get points for it at the end if you never build over it. There's also a forthcoming expansion called Villagers.

If you like pattern-matching, then this is a pleasant and challenging game with a charming aesthetic.
Tune in next week when we find the path in Tsuro...
In Acquire-To-Zendo, Kurt is going through his favorite board games in alphabetical order. Read the explainer or see more posts.