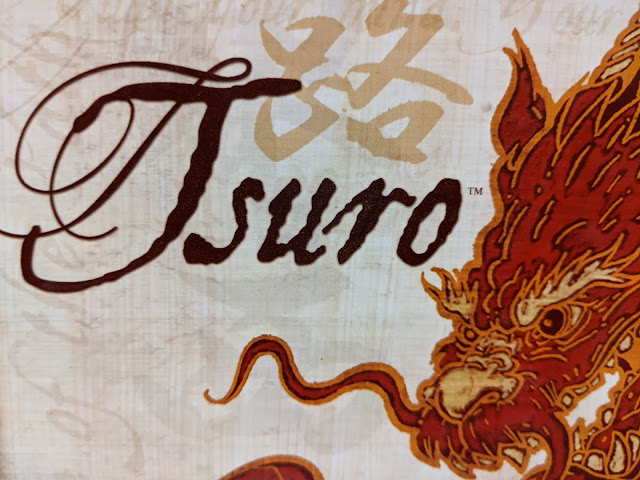 2004, 2-8 players
Complexity: light
Tsuro is another instance of what's referred to as a "filler" game--something to kill time between bigger games while other tables finish up. It plays in about fifteen minutes and doesn't require a whole lot of brain space, but it's still fun and challenging in its own way. 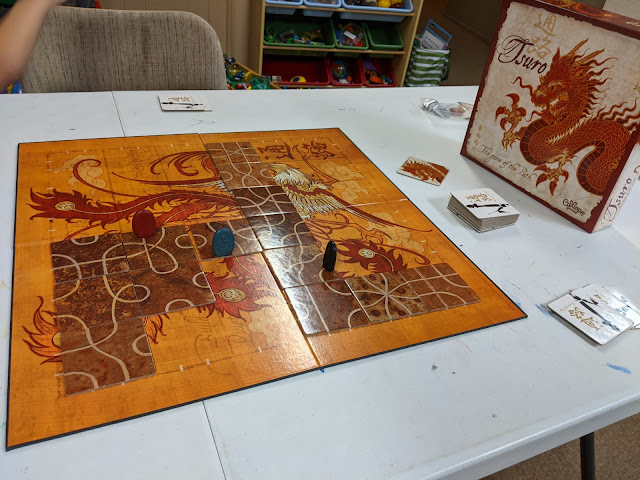 In Tsuro, you and one to seven friends will take turns laying out the path ahead of you, trying to make it last as long as possible, and managing how it effects the other people you run across. So... a metaphor for life. 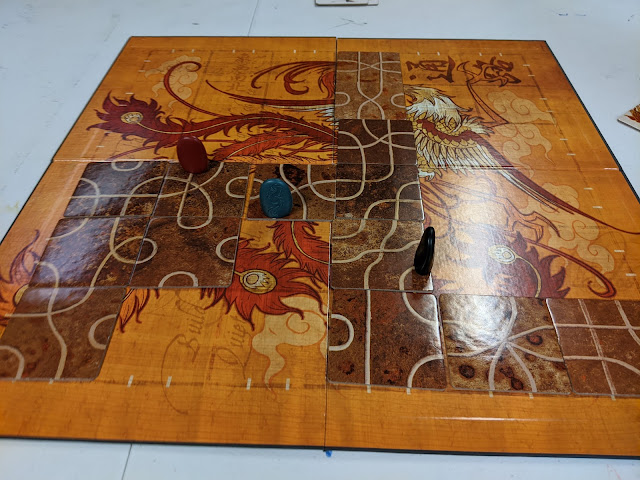 The game is played on a 6x6 grid. Each player starts at the edge of the board in the position of their choosing. On your turn, you place a tile from your hand in front of you and then follow the path until it runs out. If your tile advances you onto another tile that's already in play, you keep following the path. If you run off the edge of the board, you're out. 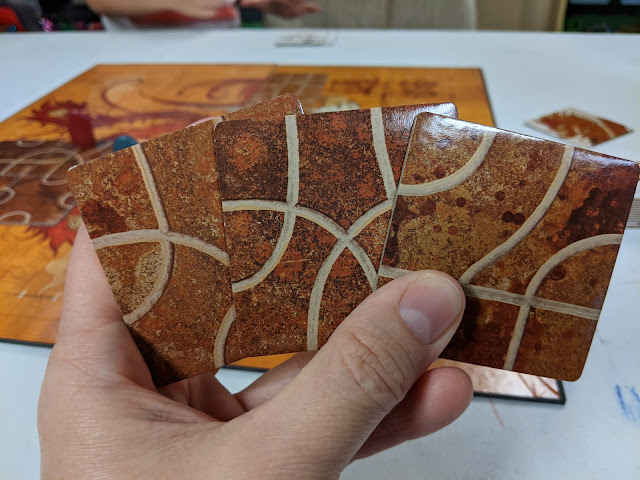 Tiles are square, so they can be oriented in four different ways. Every tile will have exactly four paths on it, each one connected to two ends of the path. They can go straight across, turn, or even loop back on themselves. 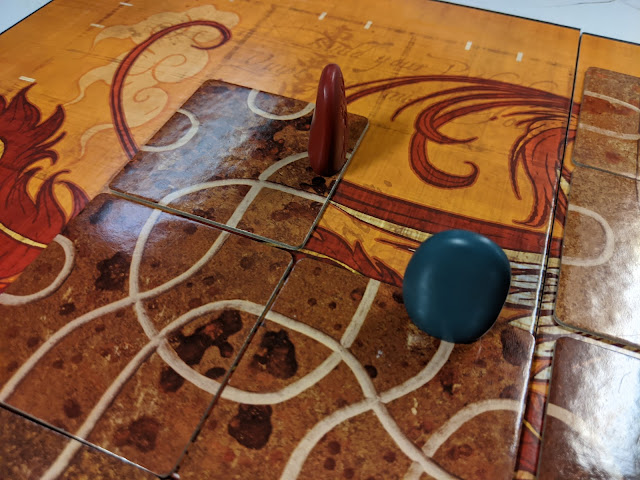 Occasionally you will find yourself face to face with another player. When that happens, you play your tile, move yourself, and then move any other players that the tile has gone in front of. This is an excellent way to run other players off the board. 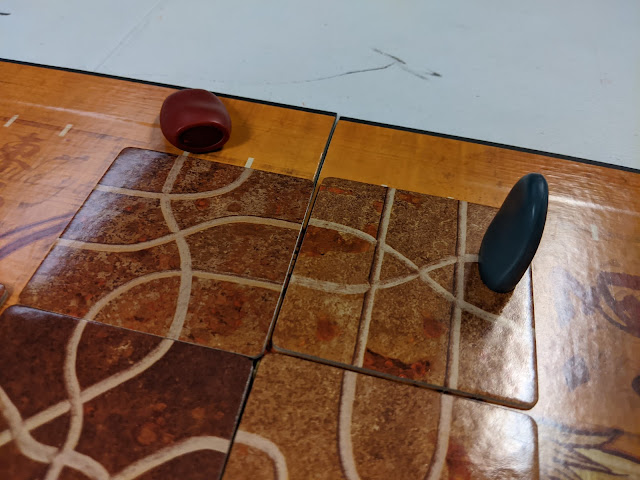 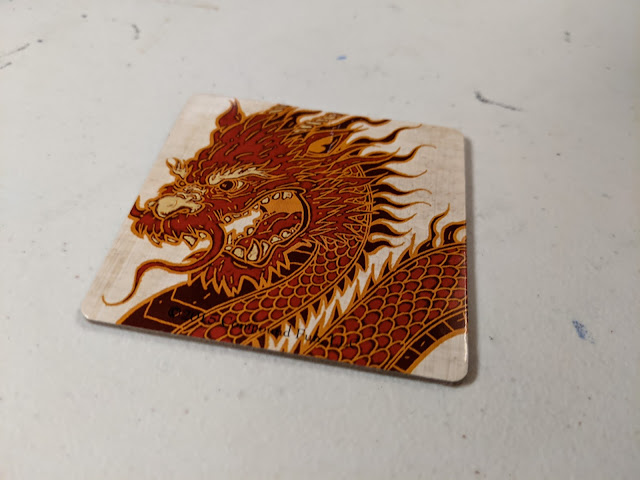 There are 36 squares on the board, but only 35 tiles, meaning it is theoretically possible to end the game in a tie. It also means that towards the end of the game, the draw pile will run out. If that happens, the active player takes the Dragon tile at the end of their turn. This is just to signify that they will be the next player to take tiles into their hand once there are more tiles available (read as: when other players are eliminated). 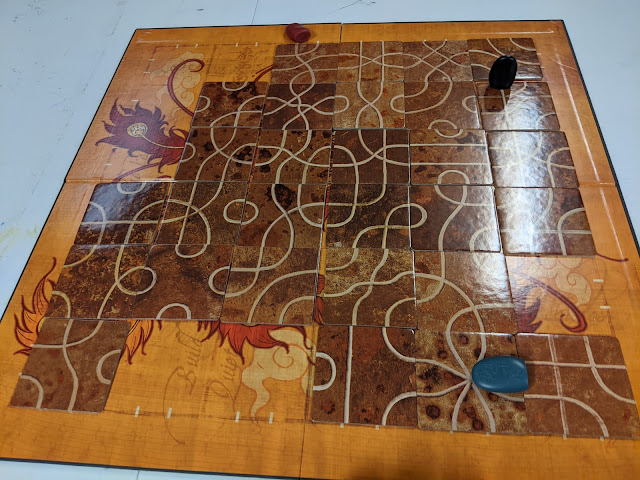 The game ends when all players but one have been eliminated. As in real life...

I've talked about this in other posts, but games are fundamentally about managing some kind of scarce resource. In Tsuro, that resource is "escape routes." Every square you enter has eight end-points, less the one you entered on. Of the remaining seven, how many of them will lead you back to an edge? As the game progresses, things are going to get tighter and tighter, meaning you have fewer escape routes and fewer tiles with which to wrangle them. This presents a few alternate strategies. Do you want to try to avoid other players and burn turns while they eliminate themselves, or would you want to race towards them to try and run them off the board?
One thing that really stands out about this game is that it is exactly as fun with two players as it is with eight. It scales very cleanly. The components are pretty nice, too, given the price point. The tokens that represent players are unique and have a nice feel to them--considering they could have just used meeples, that's a nice touch. The tiles have a good heft to them, and the art on the board is lovely.

This is an abstract strategy game without a ton of randomization in it. So, while gameplay isn't anything at all like chess, it fits into a similar kind of brain-space, and if that doesn't sound appealing to you, you'll likely want to give this one a pass. On the first couple of playthroughs, the strategy isn't immediately obvious, which can make it feel like you're winning or losing arbitrarily. This could be frustrating to some players.

There aren't any expansions, but there is a version called Tsuro Of The Seas that has a storm that moves around the board and picks up tiles. I haven't played it, but I tend to not like abstract strategy games that add extra randomization.

It's a fun, simple, fast game that scales really well and offers some challenges despite its stripped-down rules.
Tune in next week when we discover the secrets of battle in War Chest...
In Acquire-To-Zendo, Kurt is going through his favorite board games in alphabetical order. Read the explainer or see more posts.