⚔️ What Is It Good For, Absolutely Nothing...

2018, 2 or 4 players
Complexity: moderate
The old general arrived on the heir to the throne's birthday and presented him with a gift: a chest that he claimed contained all the knowledge he would need in order to rule. Inside was a set of coins and some instructions... 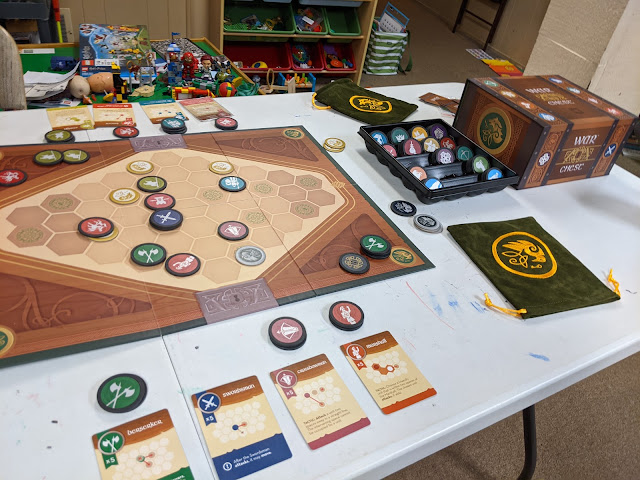 In War Chest, you and your opponent will square off to take control of the field of battle. It can be played one-on-one or two-on-two (for the duration, I will be assuming that it is one-on-one, but the rules don't change all that much if you're playing in teams). 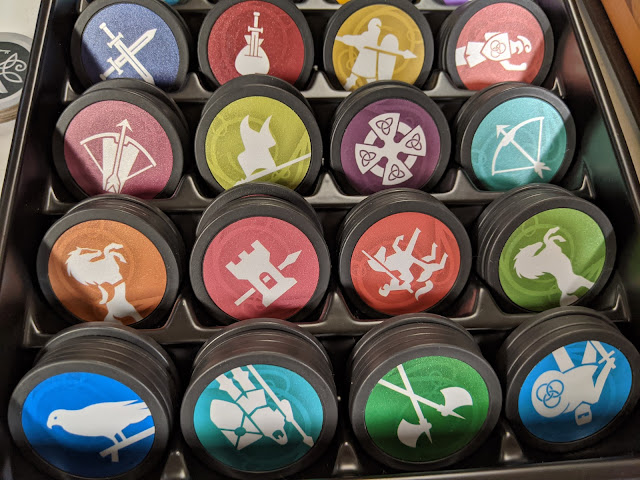 Each player has four units under their control, each of which is made up of four or five coins. There are sixteen total in the base game, and the composition of your army can be predetermined--the rulebook contains a recommended first game setup, as well as setups designed to evoke specific historical battles--or decided via snake draft. 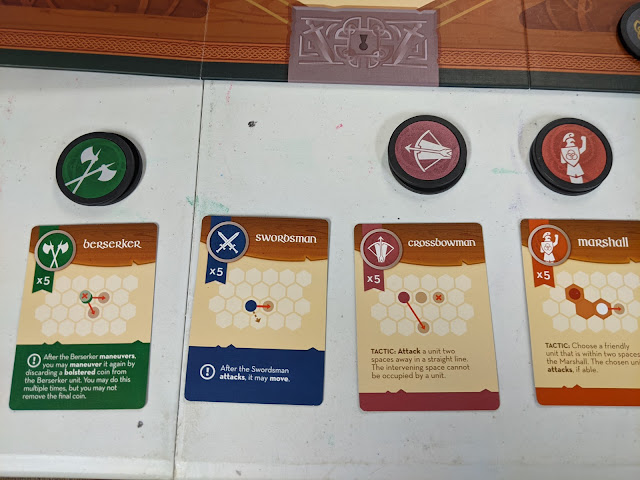 Each unit is unique, having either a specific tactic or some sort of rule that applies to them specifically. At the start of the game, you will take two coins from each stack as well as a royal coin that is not aligned with any specific unit and place these nine coins in your draw bag. On each turn, you will draw a hand of three coins from the bag. 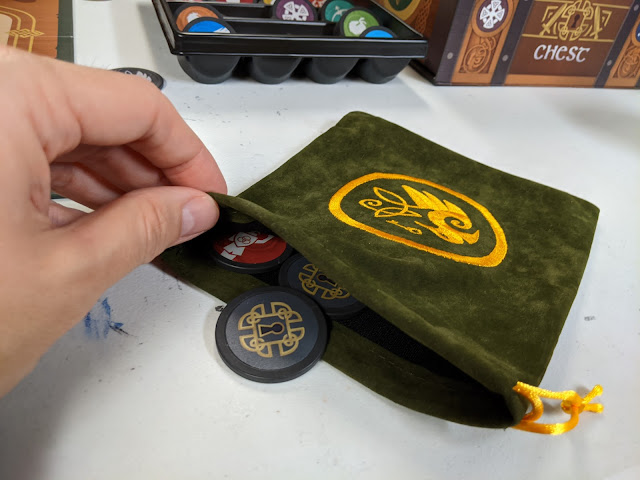 There is an initiative coin that determines which player takes the first turn each round. On your turn, you will play a coin from your hand in one of a handful of ways. These are broken out into Placement actions, Face-Down actions, and Face-Up actions. 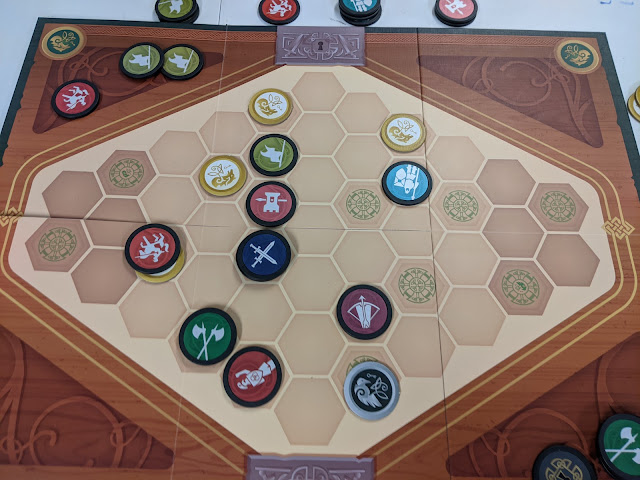 A Placement action involves adding the token from your hand to the board. New units can be put into play on any of your control points, represented on the board above by the grey bird and the gold wolf tokens. You only start with two control points, so moving getting your pieces into play is going to take a some doing. You can only have one of each unit on the board (with one exception--the Footman can have two), so if you already have a unit in the field, you can Bolster it by placing a matching coin from your hand on top of the stack that is already in play. 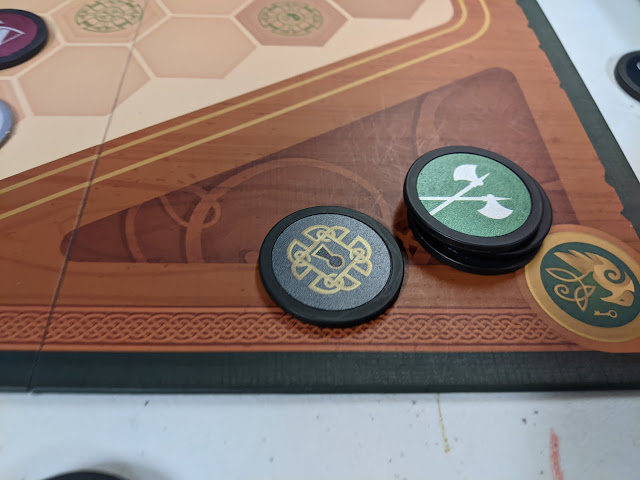 Face-Down actions are taken by placing any coin from your hand face-down in your discard area. You can do this in order to recruit a new unit--take a coin of any unit from your supply and add it to your discard area. Additionally, you can discard a face-down coin in order to claim initiative, meaning you get to take the first turn every round. Finally, you can discard a face-down coin to pass. You suspend your turns until you decide to come back in. (I've played this game many times, and I don't think I've ever seen anyone actually do this.) 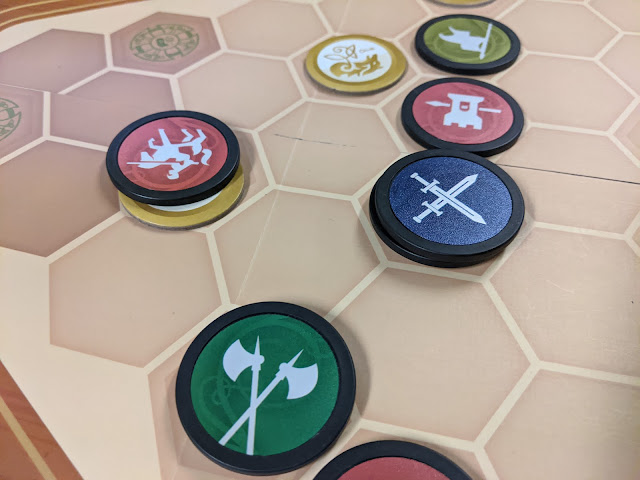 Face-Up actions are how you manipulate pieces on the board. You can discard a coin from your hand and make the matching unit on the board perform one of three actions. The unit can move one hex. The unit can attack an adjacent unit, removing one coin from the stack if it is bolstered and removing it from the board if not (attacked tokens do not go back into the supply but are removed from the game). If a unit has a tactic, then you may invoke that as a Face-Up action as well. Finally, if the unit is on a controllable hex, you may discard a face-up coin matching that unit in order to place one of your control markers there. 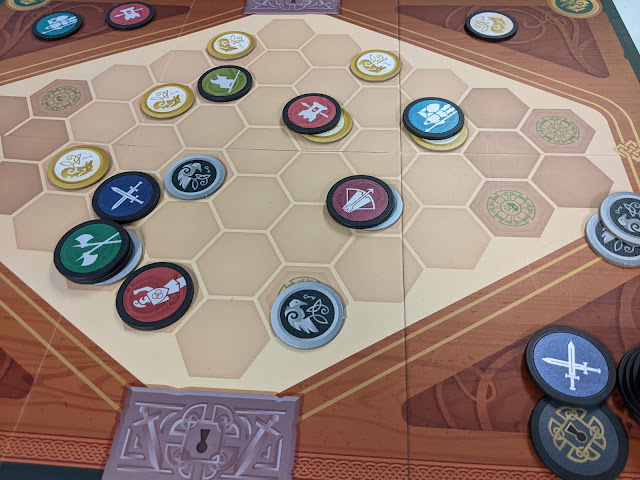 Once both players have played all the coins from their hands, they draw a new hand of three and commence the next round. If a player's draw bag runs out, they refill it from the coins in their discard area. Play continues until player has placed all six of their control tokens (or all eight in a team game), at which point, they are the victor.

War Chest is a hybrid of two of my favorite genres of game. It's primarily an abstract strategy game, but players use deck-building mechanics in order to manage their armies. And it marries the two together brilliantly. You are constantly having to balance the strength of your units in play against your ability to actually do anything with them. The more pieces in your stack on the board, the fewer are in your bag. You also need to pay close attention to the composition of your draw bag. The fewer coins you have in it, the faster you'll cycle through, but it limits your ability to add tokens to the board.
The variety in units means that every game is going to be different, and the unit strengths are fairly well balanced. There's the lancer who can move two hexes and attack. There's the archer that can attack two hexes away, but not adjacent. There's the crossbow unit that can attack one or two hexes away but only in an unobstructed straight line. Beserkers can sacrifice from their stack for extra movement. Ensigns can move nearby units and marshals can make nearby units attack. You have both light and heavy cavalry that behave similarly but different enough to be distinct. It makes for a nice collection where no one unit really overpowers the rest.
And the components are just delightful. The coins are poker chips with solid iconography and the bags are nice quality. It's a great tactile sensation overall. And the box actually looks like a chest with a fancy magnetic lid. 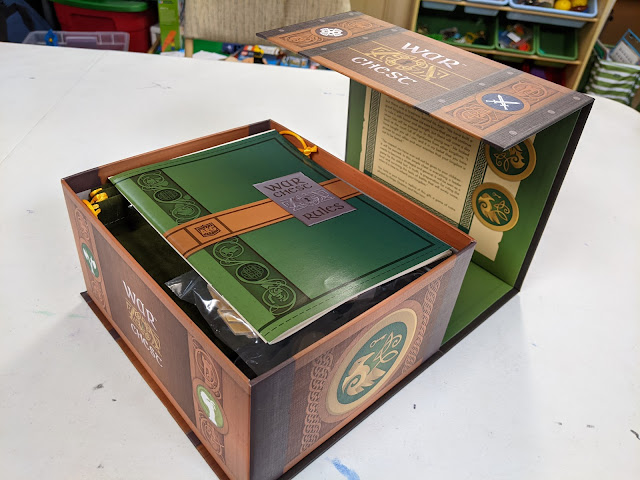 If you don't like abstract strategy or deck/pool-building, then give this one a pass, maybe? But honestly, the game is near perfect.

There is a Nobility expansion that adds some decree mechanics and a few new units and some upgraded pieces for the base game. It's quite good, but non-essential.

One of the best abstract strategy games to come out in the last few years.
Tune in next week when we become doomed in We're Doomed!...
In Acquire-To-Zendo, Kurt is going through his favorite board games in alphabetical order. Read the explainer or see more posts.