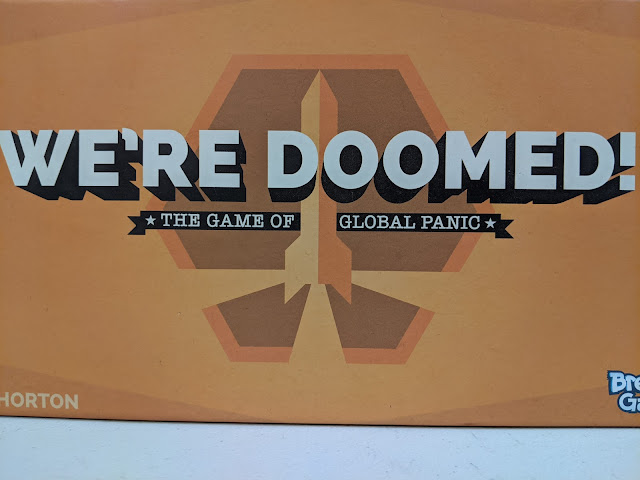 2019, 4-10 players
Complexity: light/moderate
In fifteen minutes the world is going to blow up and we're all going to die. The various major governments of the world have gotten together to build a rocket as quickly as they can and put as many of themselves on it as possible. How big will the rocket be? How many people can get on it? Who gets priority in the seating? Well, that remains to be decided. 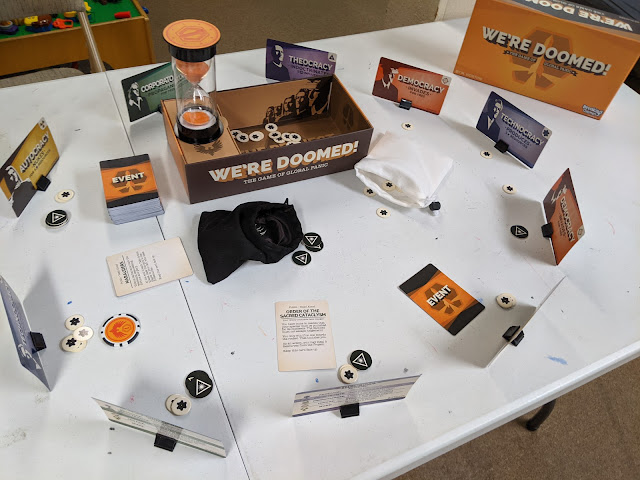 In We're Doomed!, you and three-to-nine of your drunkest friends will work together to build a rocket, represented by a giant sand-timer that you flip to start the game. In fifteen minutes, the rocket is going to leave with as many players as it can accommodate. The more Resources (white tokens) that get contributed to the project, the more seats the rocket has. However, the order in which players board the rocket is determined by how much Influence (black tokens) each player has, and whoever can't get a seat gets left behind. 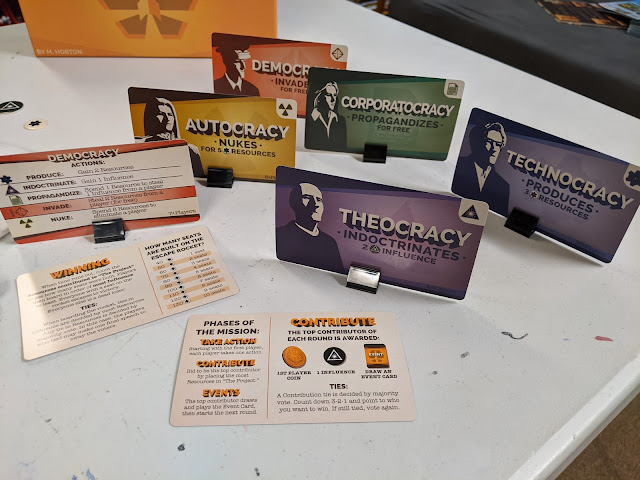 Gameplay progresses over a series of rounds. In a round each player will, in turn, perform one of five actions. They can Produce (gain 2 Resources), Indoctrinate (gain 1 Influence), Propagandize (spend 1 Resource to steal 1 Influence from another player), Invade (spend 1 Influence to steal 2 Resources from another player), or Nuke (spend 8 Resources to eliminate a player from the game). Each player also has a government type that grants them a bonus. Democracies can Invade for free. Corporatocracies can Propagandize for Free. Technocracies Produce an extra Resource. Theocracies get an extra Influence when they Indoctrinate. Autocracies can Nuke for only 5 instead of 8. 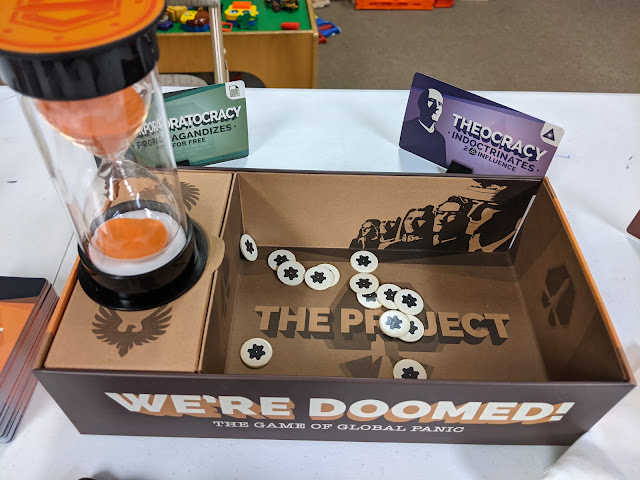 When each player has taken their action, they contribute Resources to the project. This can be done in any order, and you can increase your contribution if you want to. Whoever has contributed the most gains an Influence and will become the first player for the next round. They then draw a card from the event deck. If the Event card is white, they read it out loud and follow whatever instructions are there. If it is black, they read it to themselves and follow whatever instructions there are. 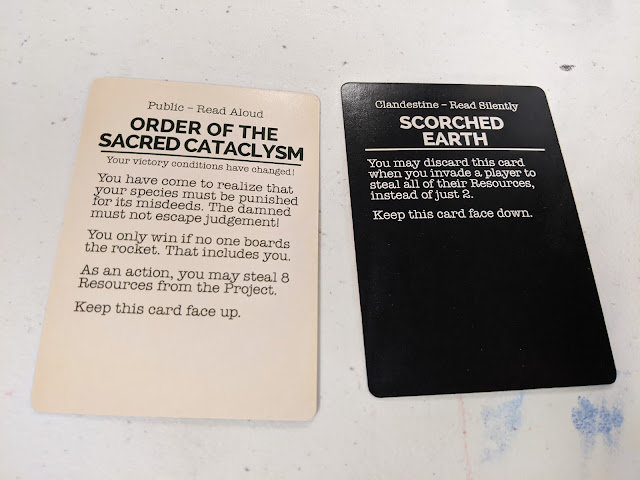 The Event deck hates you. It will take the already fraught situation and complicate it. Play continues until the timer runs out, at which point the game ends immediately and the total number of Resources in the project are tallied up. The final tally determines the number of seats on the rocket, and anyone with enough Influence to score a seat is the winner. As for the rest of us... 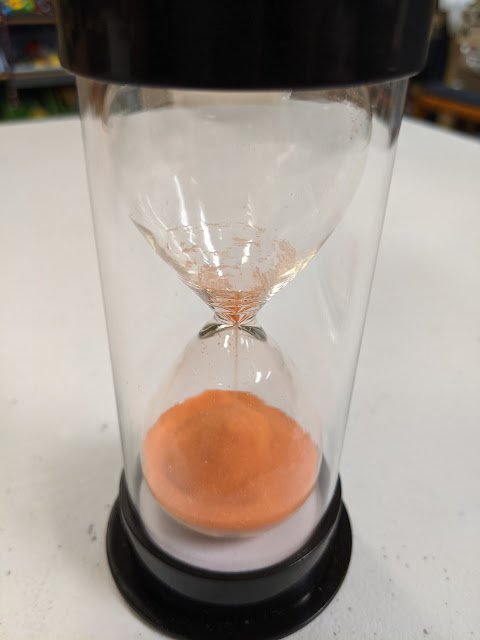 We're Doomed! is the kind of game that gets invented by behavioral economists on a coke bender. The whole mechanism of the game is The Prisoner's Dilemma. If everyone just contributes the maximum to the project, then probably everyone gets off safely. And yet this never happens. Because you can also screw over other people to help yourself and you are heavily incentivized to do exactly this. This, in turn, breeds a distrust of the other players that just encourages you to be even more ruthless. (Is the Authoritarian stockpiling Resources? We should Invade so he doesn't Nuke us! How topical!) But you can't be too ruthless. You still need at least 40 Resources in the project for the rocket to even get built at all.
And just in case you're planning to try and coordinate an easy victory, the Event deck will put a stop to that. Event cards are where the game transcends its deep cynicism and achieves a kind of gleeful anarchy. Public Events (white cards) will sometimes steal Resources or alter win conditions. One card will force a player to keep their thumb on the table for the rest of the game or risk blowing themselves up. Sometimes they just waste time by making you do pointless tasks like having everyone invent their own National Anthem and voting on whose is the best. There's a card that causes you to be eliminated if you touch a cellphone. Was a cellphone thrown at another player in retaliation for being Nuked in the game where that card came up? Of course it was!
The Private Event cards (the black ones) are just as horrific, but in their own special way. One of them you play by throwing it at another player while shouting "Death to the infidels!" (there's not necessarily a lot of throwing in this game, and yet I can think of three or four instances, which is probably why I recommend playing it drunk). Sometimes you save them to use later. Sometimes you give them to another player and they have to decide whether or not to look at it and face the consequences of doing so. The card that made me decide I needed to own this game was one of those. I spent the rest of the game wondering if I should flip it over and I finally looked at it after the game ended and it turned out that it did... nothing at all. If revealed, you discard it. The whole point of it being there was to mess with me. It was a thing of beauty.

It turns out that the thematically perfect game for 2020 is also nearly unplayable in 2020 because it requires a minimum of four players.
Sigh.
And, realistically, it plays better at the higher end of the player-count range. It is the party-est of party games. As such, your experience with it is going to vary depending on whom you're playing with. It's also an extremely chaotic and swingy game, and for a lot of people that's just not their jam. If madness stresses you out, give this one a pass.

Doubtful. But I could see it being re-themed or given a sequel.

It's one of the most fun party games I've ever played. It's darkly hilarious in the most maddening ways imaginable.
Tune in next week when we question the nature of victory in Why First?...
In Acquire-To-Zendo, Kurt is going through his favorite board games in alphabetical order. Read the explainer or see more posts.