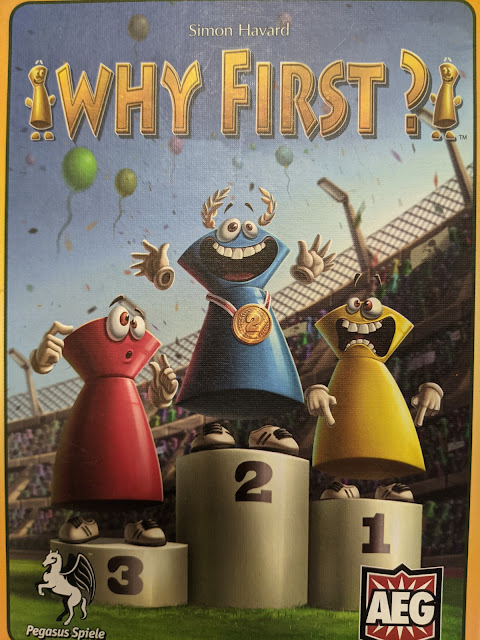 2015, 2-6 players
Complexity: light
What is victory? Why do we place so much emphasis on winning? This is the deeply philosophical question at the root of Why First?, which is a deeply silly small-box party game. 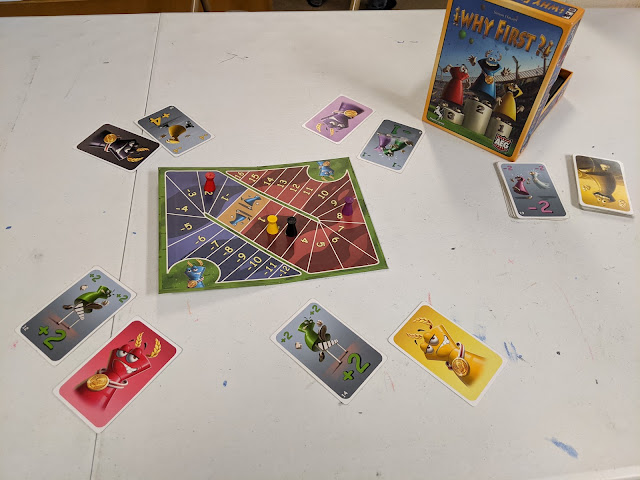 In Why First?, you and two to five friends (there are separate rules for two-players, but it's intended to be played with at least three) are racing pawns up and down a track. Although "track" is misleading, as it's less a distance to be covered than it is a place where pawns are ranked. 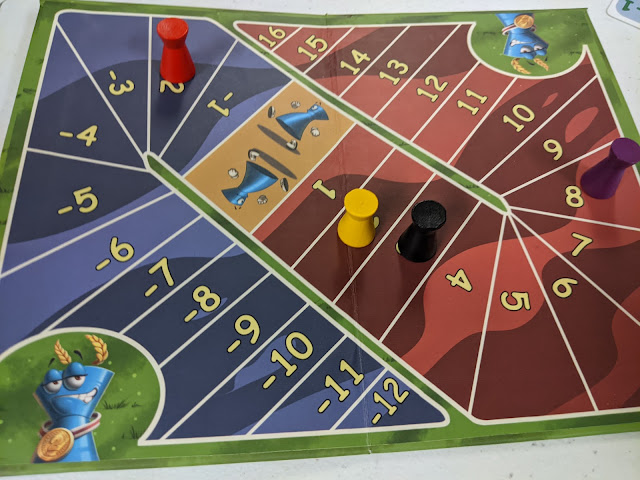 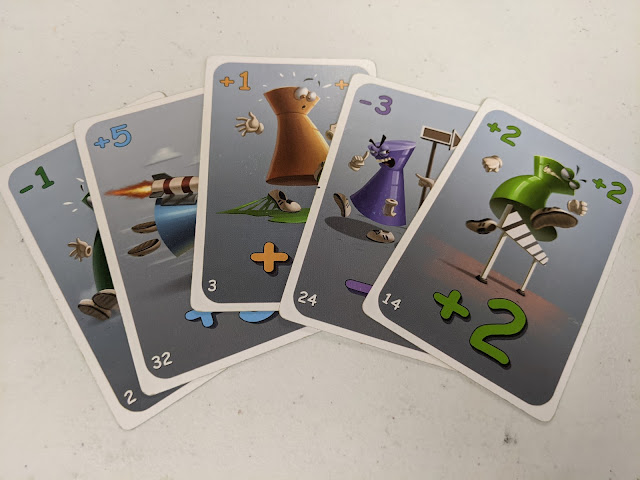 Once all five cards have been played, the round is over. Whichever pawn or pawns are in second place score points equal to the space they're on. In the picture below, yellow would score two points, and no one else would score any. Yes, it is possible to score negative points. And it is often desirable to do so. You then reset the pawns at 0 and deal out a new hand of cards. After five rounds, the game is over. Tally up the scores and whoever has the most points... loses. The player with the second-highest score, on the other hand, is the winner. 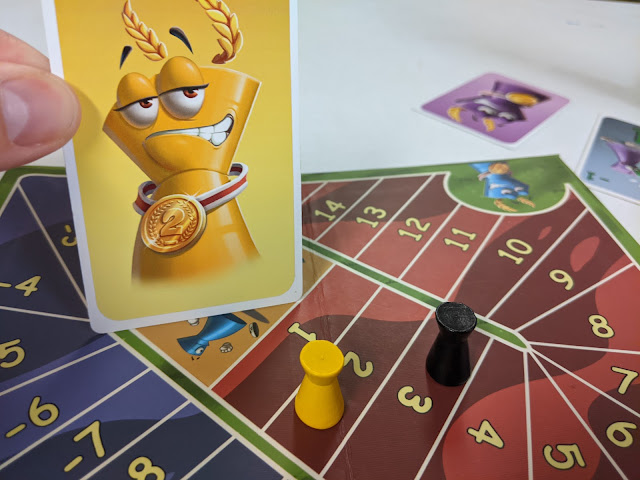 Why First? is the game I break out on day four of the gaming conference--when everyone's brain is fried from learning rules, we're waiting around for the organizers to announce the door prize winners, and we want to play something goofy that's kind of mindless but also kind of engaging. Why First? fits the bill perfectly. It can be taught in about thirty seconds and gameplay is fast and chaotic. But there's a deceptive little strategic element there that becomes glaringly obvious after the first round, when someone has worked very hard to score points only to realize that if the game ended then, they would be the only person to not win because they are in first place and everyone else is tied at 0.
Subsequent rounds then become about positioning. I need Bryan to score at negative 3 points so I'll be in second place. Or I need to score at least 3 points, but no more than five, because then I'll overtake Sam. And within a round, you're playing your cards to mess with other players while figuring out which card to hold back, knowing that you have to play your last card in front of yourself. Do you try to minimize your movement at the end, or do you hold back a +5 so you can leap ahead when it's too late for anyone to do anything about it.
Invariably, a lot of players are thinking the same thing and their small efforts to nudge each other compound and send pawns flung off to the far ends of the board, and then you need to put a lot of effort into getting them back. It makes for a hectic game that's surprising and a lot of fun.

The first play of the first round can cause some analysis paralysis because nobody has any idea what to do. I would love a larger board that laid flatter. The board it comes with is so small and gets folded in half to fit in the box, so it ends up not laying completely flat.
And if you don't like chaotic games like Fluxx or We Didn't Playtest This At All because they mess with your sense of strategy, then this one won't be for you.

God, I hope not. How would that even work?

This is one of my favorite filler games. It's short and unique always gets a laugh, and it does so without telling poop jokes.
Tune in next week when we build an avian sanctuary in Wingspan...
In Acquire-To-Zendo, Kurt is going through his favorite board games in alphabetical order. Read the explainer or see more posts.