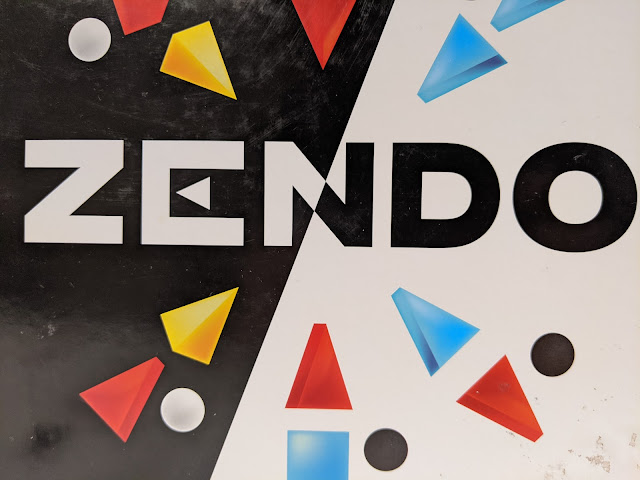 2001, 3-5 players
Complexity: light/moderate
From the weirdos who brought you Fluxx and Pyramid Arcade, it's a game that's not so much a game as it is a competitive logic puzzle. Players will take turns building structures from blue, yellow, and red blocks, wedges, and pyramids to try to discern the secret rule that only the Master knows! 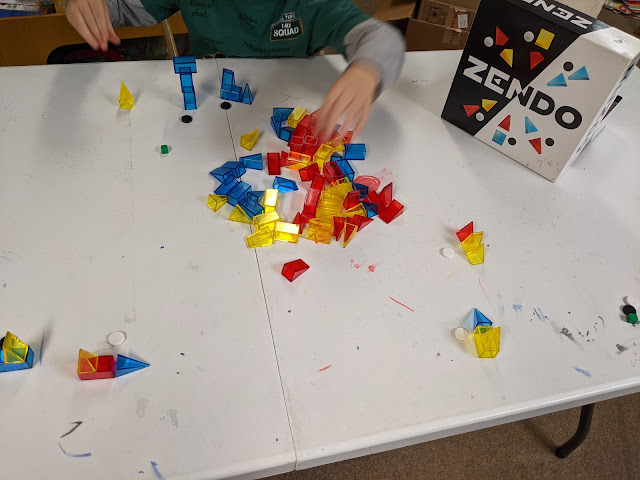 In Zendo, you or one of your friends will take on the role of Master and present a puzzle for the other players to solve. The Master takes a card that has some options for a rule and chooses two options by putting clips on them (not all cards have two options, but each card has a place for two clips). 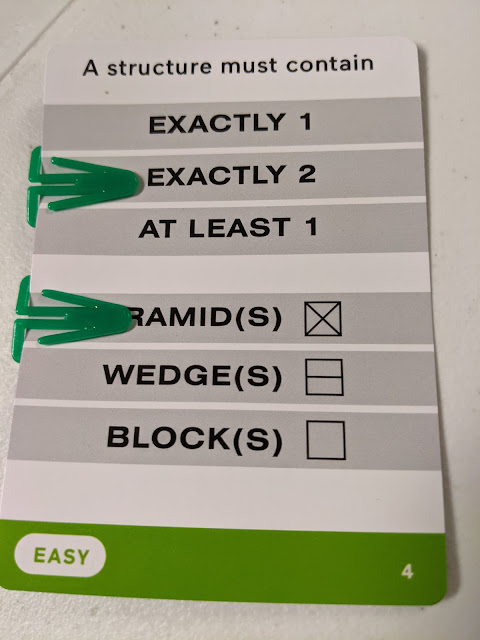 The Master then builds two structures. One of them satisfies the rule and one does not. They are labeled with black or white discs to indicate their correctness. 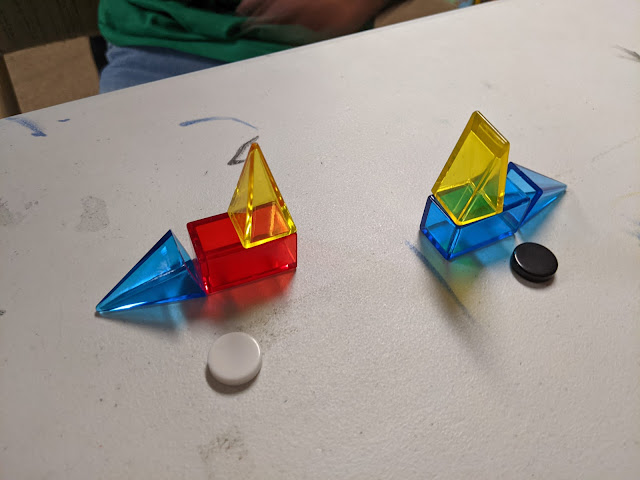 The other players will then, in turn, build a structure of their own to try to suss out what the rule is. Once they have build a structure, they can then have the Master either tell them outright if it satisfies the rule or not, or give a quiz. 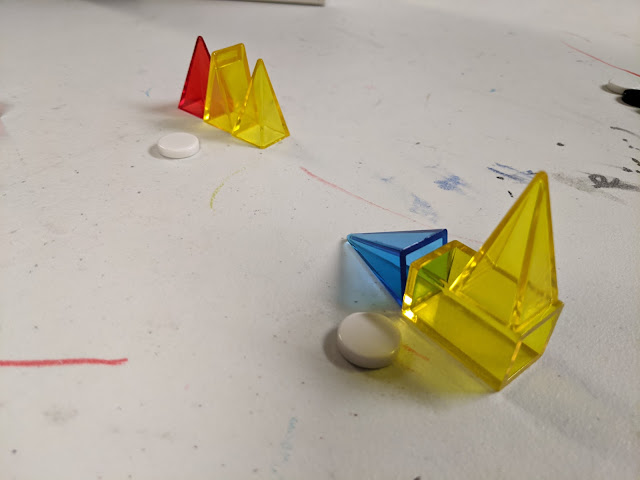 If the player opts to have the Master "tell" them, then the Master just places a black or white disc in front of the structure. But if there is a quiz, then each non-Master player puts either a black or white disc in their hand to indicate whether they think it satisfies the rule or not. The Master then announces the answer and every player shows their hand. Anyone who was correct gets a green guessing cube. 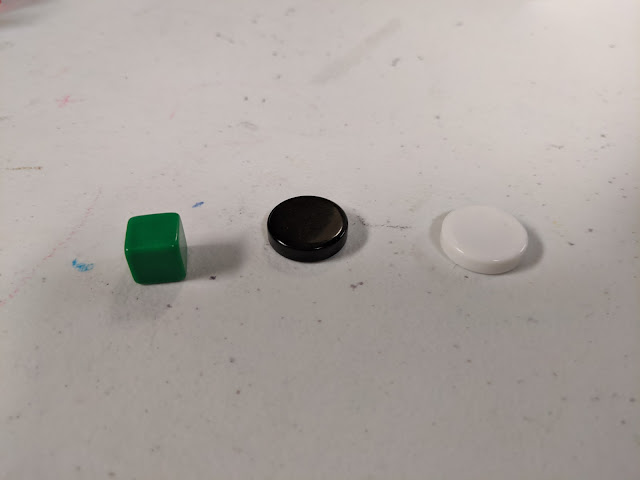 At the end of each non-Master player's turn, they may spend a cube to make a guess at what the rule is--if they have one. They announce their guess and the Master either reveals their card or disproves the guess. This can be done by either creating a structure that satisfies the rule but breaks the player's guess of the rule, or vice versa. 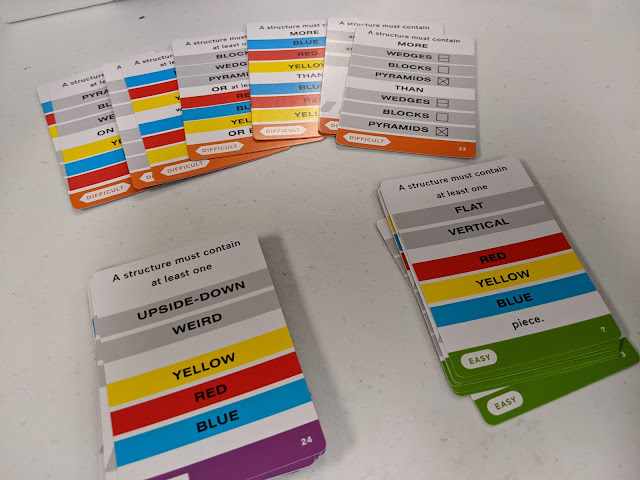 Once the rule has been correctly guessed, a new Master is chosen and they pick a new rule. Rules can be about color, number, shape, orientation, which way they're pointing, if they're touching or stacked on each other. There's a lot of variety across three levels of difficulty. You can keep track of wins and losses, but that's not really the point. The point is to engage your mAd LoGIc SkiLLz to identify the rule. And once that happens, we're all winners. Except perhaps for the table. 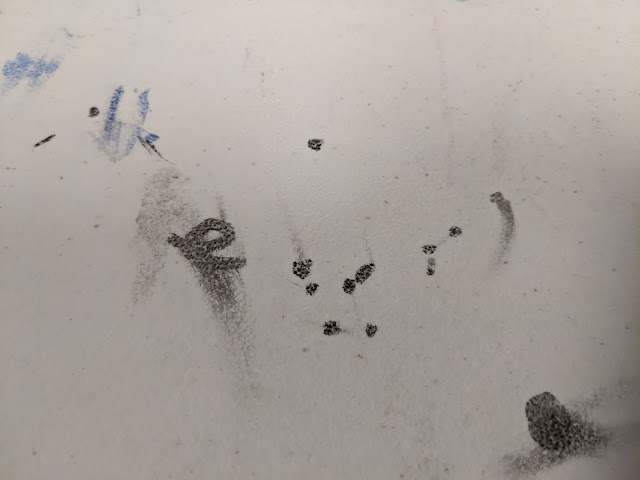 This table was white before my youngest child started e-learning on it.

As stated in the opening, this isn't really a game. It's a puzzle. And it scratches that puzzle itch quite nicely. The joy of playing isn't in beating other players or getting a particularly high score--it's in that moment of revelation when everything snaps into place for you. You've been stumped, but then you see the answer and it's so obvious and how did you not see it before?
Additionally, the building components are just fun to play with. Good tactile experience. It's building blocks for grown-ups. Or... it would be, but I've mostly played it with children.

As stated in the opening, this isn't really a game. It's a puzzle. Is that a good or a bad thing? Your mileage may vary. This is also a game where analysis paralysis is extremely possible. So I honestly recommend that instead of playing competitively, players all talk out their thought process and try to solve it together. That can be helpful if you want to get into the difficult cards.

There are two small expansion packs that each have ten new rule cards. They are extremely not-expensive, and it's recommended that no one look at them until you're ready to start playing with them, so the discovery of the rule is a surprise.

It's a good cerebral game that's accessible to a lot of age and skill levels. My 6yo (despoiler of tables) turned out to be quite adept at it, especially when playing as the Master.
Tune in next week for a run-down of games that didn't make this list because they came out too recently, but that I really liked anyway...
In Acquire-To-Zendo, Kurt is going through his favorite board games in alphabetical order. Read the explainer or see more posts.