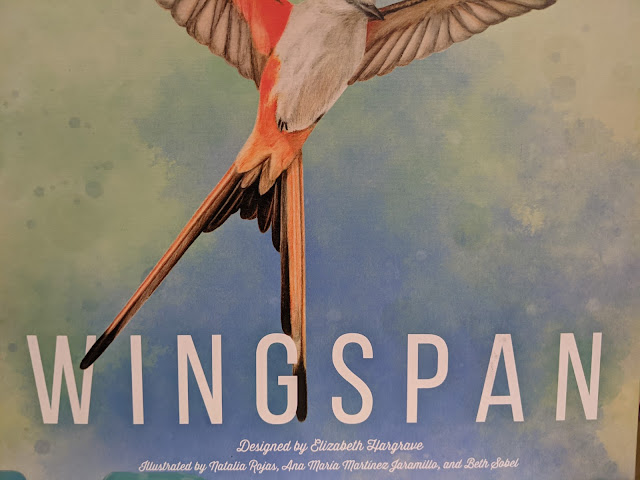 2019, 1-5 players
Complexity: moderate
Every now and then a game comes along and just takes the gaming world by storm. In 2019, that game was Wingspan. Stonemeier's perennially out-of-print lovingly-crafted engine builder was the must-have-can't-find item for board game enthusiasts and it is, in fact, still difficult to come across in the 2020 holiday season. 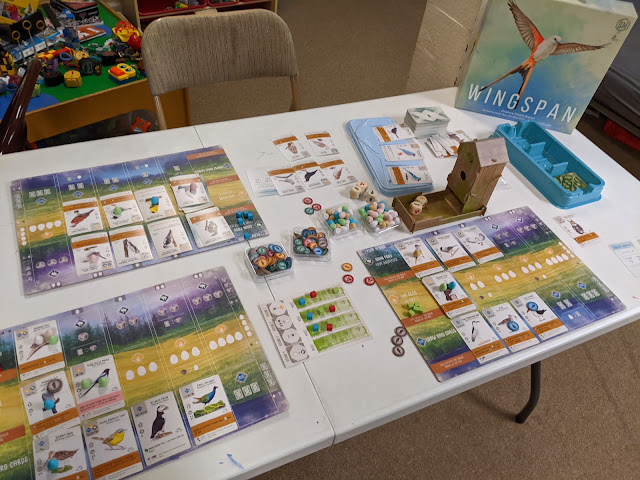 In Wingspan, you and up to five friends will take turns attracting birds to your wildlife reserve. On your turn, you take one of four actions. Your first available action--and it is likely the first thing you will do each game--is to play a bird card from your hand by paying its cost in food tokens and eggs and adding it to your player board. 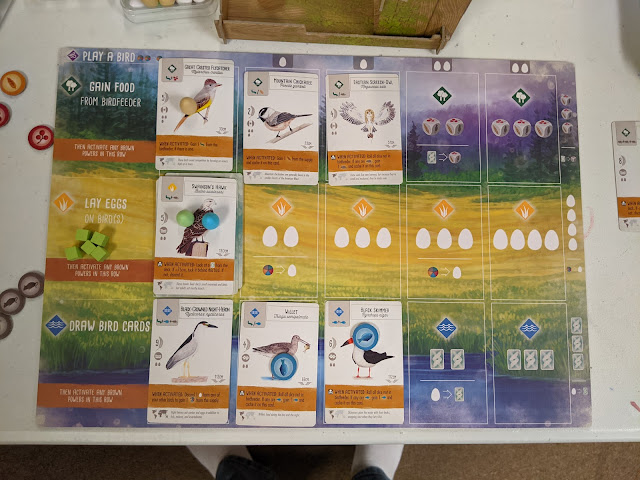 Your board is divided into three zones--the forest, the grasslands, or the wetlands. Birds are limited as to which zones they can be played in, although several of the birds are capable of inhabiting more than one zone. These zones also correspond to the other three actions you can take: gain food, lay eggs, or draw cards, and when you take one of those actions, you will trigger any abilities on the bird cards in that zone. 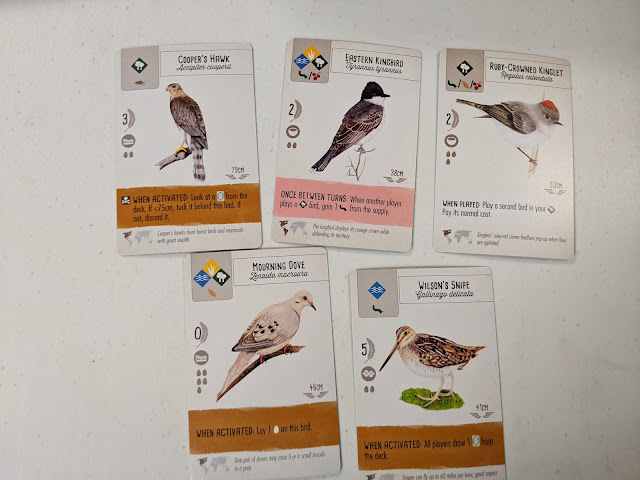 Bird powers typically involve gaining food, laying eggs, caching food on the card, or tucking other cards underneath it (both of which count towards your score at the end of the game). Most bird powers are brown, meaning they are activated during your turn when you take an action, but a few are pink, meaning they activate during other players' turns, or white, meaning they have an instant effect but don't activate after that. 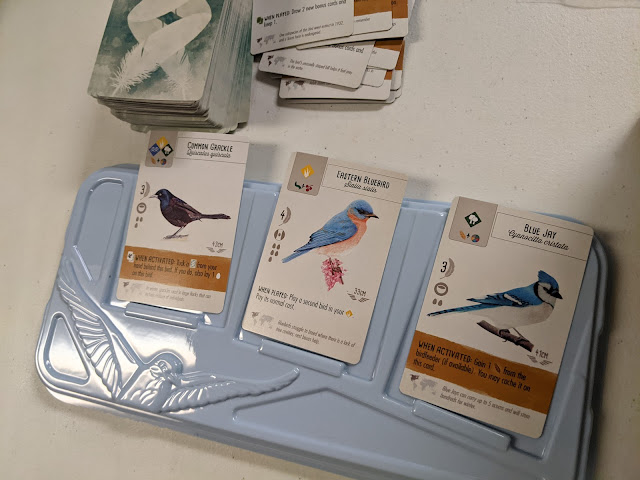 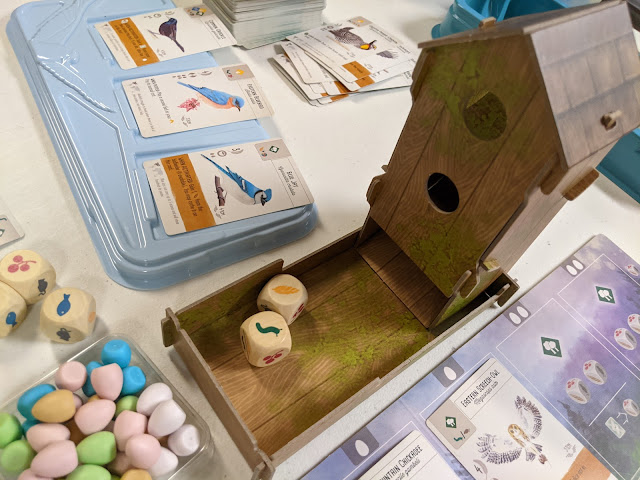 There five types of food and five dice representing the food that's available. When you take food, you remove a die from the feeder and take a token of that food type. If the feeder is empty you reroll all the dice, or if the feeder has only one type of food left, you can optionally reroll. You track your actions using cubes, of which you start the game with eight. At the end of each round, you score bonuses. 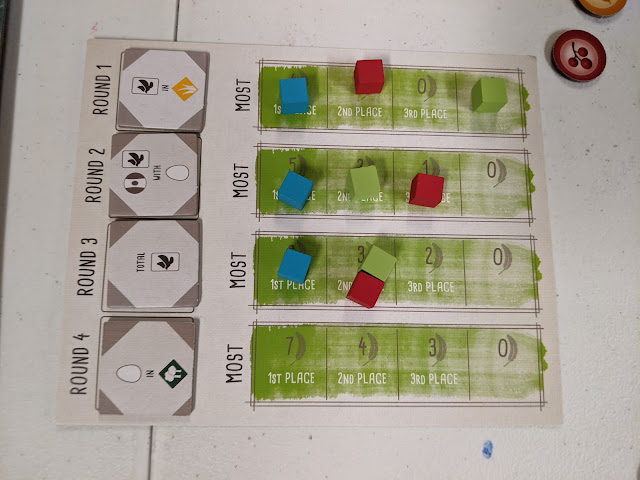 These are drawn randomly for each game, but in this example, the bonus in the first round goes to the player with the most birds in the grasslands. The second round bonus goes to the player with the most birds with a cavity nest with at least one egg in it. And so forth. You track these bonuses with cubes, meaning each round of the game is one turn shorter. After four rounds, the game is over. You tally up points for birds, for any bonus objective cards you have (you start with one, but can acquire more over the course of the game), and end-of-round goals, as well as points for eggs, cached food, and tucked cards. The player with the highest score wins. 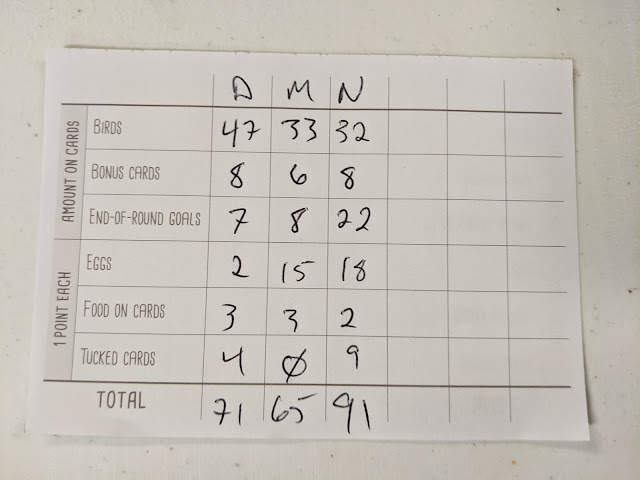 But really, we're all winners, because we got to see these pretty birds.

Engine builders are very much en vogue right now, and Wingspan is a finely-tuned one. The gameplay is not terribly complex--I mean, it's a little complex, but my 9yo can play it without help--and it offers opportunities for strategic depth. The card art is gorgeous. The components are robust but also charming, from the egg tokens to the little trays to keep tokens in to the wooden dice to the bird-feeder dice tower. It's a tactile delight. The theme feels extremely well-integrated to the gameplay, and the variable round goals mean you can't just lean on one thing for the whole game; you really need to pursue different strategies and be planning out several turns ahead.
It's one of those games where you can't point to any one that thing makes it great, but rather it's the confluence of all of these elements working together.

There's a bit of a learning curve. Once you get the hang of it, it's very accessible, but it can be daunting at first. Newer editions have a quick-start game to help ease players in. And it's a long game, especially when you're new to it, and if you're playing with contemplative players, that can mean you spend a lot of time doing nothing. It's also got a pretty high price point. Stonemeier makes games with high quality components--which I love--but you're paying for that.

The core game is all birds from North America. There is a Europe expansion that adds birds from that region and a forthcoming Oceania expansion will add even more.

It's one of those rare things that lives up to the hype. I heard about it in January of 2019, but couldn't get time on a board until June, where I was able to sit in for a round, and I definitely bought it as soon as I could find it in stock. It's a work of art.
Tune in next week when we finish this thing off with Zendo...
In Acquire-To-Zendo, Kurt is going through his favorite board games in alphabetical order. Read the explainer or see more posts.