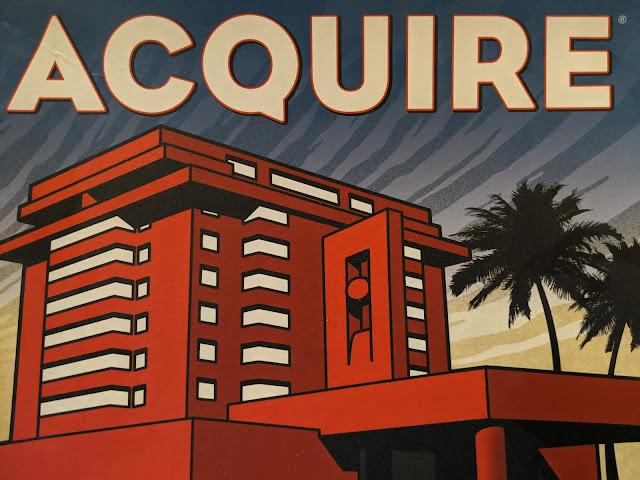 Okay, maybe it's not the first eurogame, but Acquire was an early success and remains one of the most influential. Designed by Sid Sackson, it became wildly popular in Germany in the 60s and then throughout Europe. In the post-war era, it turns out, Germans weren't too interested in games like Risk and Monopoly that focused on either global conquest or the quick acquisition of property. So a new genre of board game emerged that placed more emphasis on social play and strategy rather than luck and direct competition. They tended to be easy to learn but difficult to master. And, in contrast to a Risk or Monopoly where you win by eliminating all the other players, eurogames allow all players to play all the way through to the end and instead have some gameplay mechanism to trigger the endgame.

Acquire became the template that other eurogames would build on. Love Ticket To Ride or Power Grid? Well, you have Acquire to thank for that. It's not super well-known in The States because eurogames didn't really catch on here until Settlers Of Catan crossed over in the mid 90s, but it's much-beloved in Europe. 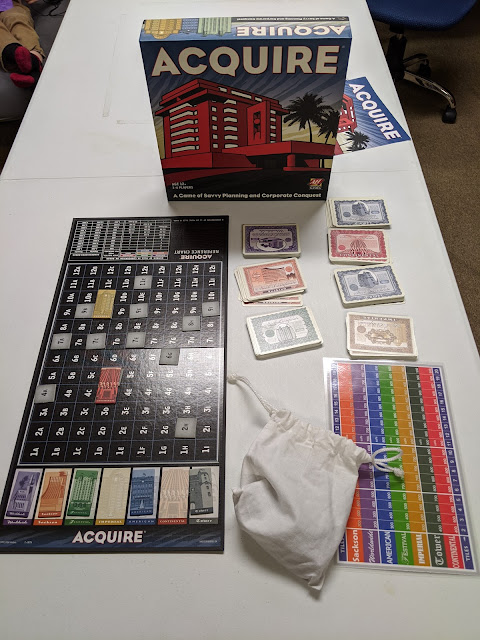 In Acquire, you and two-to-five of your friends are venture capitalists investing in emerging hotel chains. You have a number of tiles in front of you (similar to Scrabble) that correspond to squares on the game board. On your turn, you take one of your tiles and play it on the board. If you place it next to an existing tile, then, congratulations, you've formed a hotel chain. Take one of the markers and place it on your chain. Every subsequent tile that gets added to the chain makes the hotel bigger. 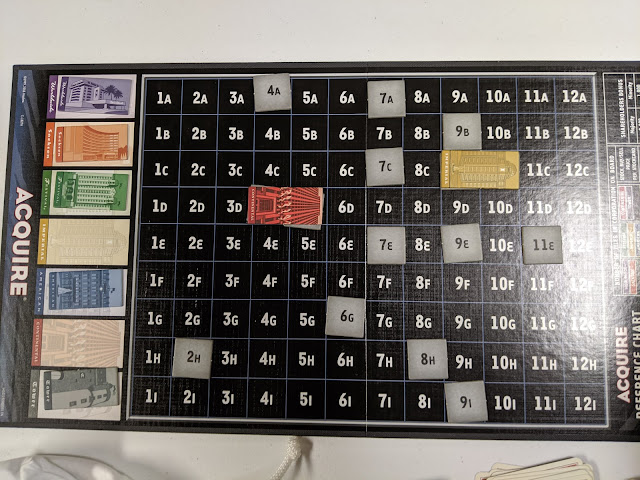 At the end of your turn, you have the option to buy up to three stock certificates in a hotel that has been placed on the board. The price of the stock is contingent on how big the chain is, so if you buy early, you get a better price than someone who comes in later. Stock is important because, eventually, two hotel chains are going to bump into each other. When that happens, the larger chain invokes the title of the game and acquires the smaller one. The stock-owners in the smaller chain get bought out and the major and minor shareholders in both chains get hefty bonuses. The acquired chain gets recycled back into the supply, and the game continues. 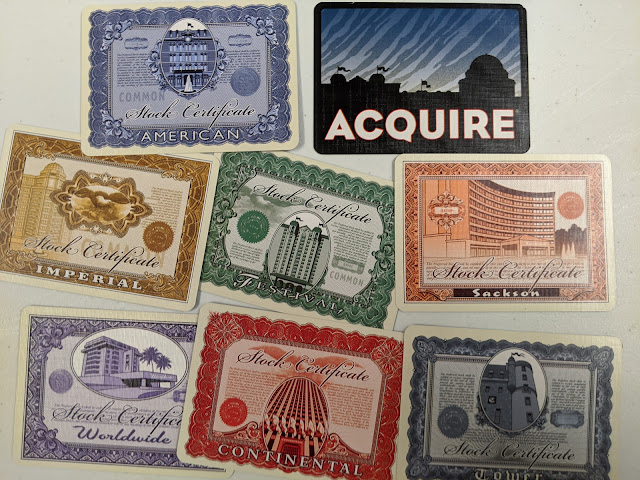 There are a number of conditions that might trigger end-of-game, but the one I've mostly seen is a hotel growing to 41 tiles. At that point, everyone sells off their remaining stock and whoever has the most money is the winner! 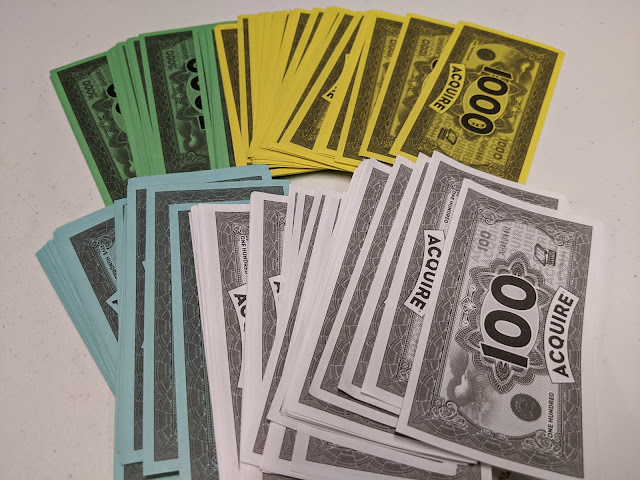 As in real life.

There's a simple elegance to a good eurogame. The objective is clear and the rules are straightforward. The strategy comes in how you position yourself to be bought out. You have a handful of tiles in front of you that may be able to cause two hotels to merge. Can you get enough stock in one of them to get a bonus when you trigger the acquisition? You have a limited number of buys and--early on--a fairly small amount of money to spend, so how do you manage your resources in order to maximize your payout? It's the kind of game where you can feel like you're just one turn behind where you need to be, which keeps things fairly tense and engaging. But, on the other hand, there's not a mechanism for you to target other players, and it's generally not clear who's winning until the final scoring happens, so while it can be a tense game, it's rarely mean or aggressive.

While Acquire is a lot of fun, it's very mathy. The schedule of stock prices is not something you can just memorize, because it varies by hotel size and across classes of hotels. Some are just more expensive than others because they are. So you spend a lot of game time consulting charts and adding up numbers in your head. Also, the play-time is a little on the long side for a modern eurogame. The box says 90 minutes, but even with experienced players, you're looking at a good hour at least.

I have a slightly older edition that was mass produced with some fairly flimsy pieces and doesn't include rules for two players, which irks me. It's hard to play a game in my household that requires a minimum of three players. Although it looks like newer editions have more robust components and two-player rules. THAT SAID, a lot of games that realistically need three players or more will include a two-player variant that kind of sucks. I don't know if that's the case here or not.

The other potential drawback is the price point. A new copy is going to run you around $35. You'll get nicer components than what I have, but that's over twice as much as you'd pay for a basic copy of Monopoly--which is the game it gets most often compared to.

Not to my knowledge. This game is older than the idea of expansions, and it's very complete as is. I don't know what about it could be expanded. As popular as it was, I'm a little surprised that it hasn't been branded into different editions, though. Why isn't Acquire: Game Of Thrones a thing?

Acquire is kind of like The Velvet Underground in that it's important mostly because it's been so influential. It feels like a bit of a relic, and a lot of the mechanics have been better implemented by more recent games, but it still holds up really well. As mentioned above, it's generally offered as a smarter, friendlier, funner alternative to Monopoly, and while I will defend Monopoly (that's a post for another day, I suppose), Acquire is definitely the better of the two.

Tune in next week, when we'll journey to the end of days to defend humanity against the horrific monsters of Aeon's End...
In Acquire-To-Zendo, Kurt is going through his favorite board games in alphabetical order. Read the explainer or see more posts.