Stray Thoughts: In Defense Of Monopoly 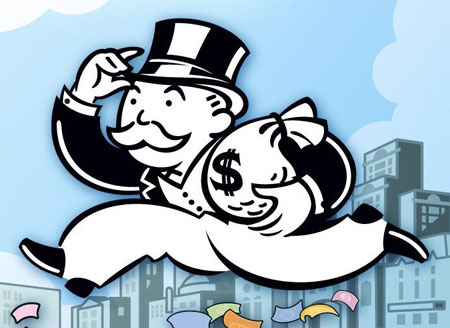 Monopoly has attracted a lot of haters over the years, people who grew up playing it and remember the excitement of the first thirty minutes and the profound boredom of the subsequent twelve hours of gameplay. Now that we're in the middle of a board game renaissance, it's easy to come out and say that you think it's the worst game in the world. Well, right now I'm blogging about my favorite board games and in one of those posts I made an off-hand comment that I would defend Monopoly.

Time to do that, I guess.

Monopoly is not the worst game in the world. It's not even a bad game. It's a pretty solid one, albeit one that shows its age. Yes, the cards are flimsy, yes winning by elimination sucks for whoever gets eliminated first, and yes it's only so popular because we all played it a lot because we had a copy growing up or our grandparents had a copy because it was relatively cheap as time-wasters go and in the sphere of board gaming it just didn't have much competition. Fittingly.

My thesis here is not that it's a great game, only that it's a pretty good one, actually, as long as you play it right. And "play it right" is a pretty central part to that thesis. A four-hour version of this game is not going to be fun for anyone, but in reality it should never last anywhere near that long. And yet it does--frequently. And that's something that needs to be explored a bit. Because while it's a good game, it's a pretty fragile game system that people are all too eager to take liberties with.

You may have heard people talk about house rules and how they break Monopoly. They totally do, and you should stop playing with them.

What sort of house rules? Here are a smattering I've run across: money that would go to the bank instead goes on Free Parking and you get it if you land on it; you can't start negotiating until all properties are bought; no auctions; start with an extra $500; start with $500 on Free Parking that goes to whoever lands there first. Or any combination of these, really. In fact, modern printings will include a warning telling you not to add any house rules. Because--once more for the kids in the cheap seats--house rules break Monopoly.

To really understand why, I want to talk a little bit about what a game is.

A game is a closed systems of rules with predefined desirable objectives and/or metrics. Players work within those rules to achieve those objectives or maximize those metrics. Games typically have some kind of randomization mechanism, e.g., cards or dice or spinners or a pop-o-matic bubble, although some games like chess or Connect4 don't have any randomization beyond picking who goes first. They include mechanisms for players to make meaningful choices that affect the outcome. The big exception here is Candyland, but that's not even a real game now, is it? And, finally, they need some way to indicate when the game has ended, like a timer or an end-of-game trigger. So if you want to understand a game, you need to think about its mechanisms and objectives.

With these definitions in mind, what kind of game is Monopoly? Well, at first glance it's a set-collection game that uses dice as a movement randomizer, and the objective is the get the most money. There's not a ton of player choice, but you can do some negotiating if you want to. Most of the house rules that crop up around the game (like the ones I listed above) are implemented with that framework in mind.

The reason those house rules break the game is that the description I just gave you is fundamentally wrong! Monopoly is not a set-collection game, and it most certainly does not have an objective of get-the-most-money. Monopoly is actually a negotiating game that uses auctions and dice-rolling as a randomizer for distributing property, and it uses money as a timer.

Got it? Good. Let's break these out one by one and look at how house rules undermine them.

It's a negotiation game. Full-stop. This is the main mechanic. It's where virtually all of the player choices are made. What typically happens is that you have 2/3 of a monopoly and one other player has the remaining card. They know that this card is worth more to you than it is to them. So you bargain. You sweeten the pot because maybe you have something that helps them out. Do the short-term losses of overpaying for a monopoly offset the long-term benefits you'll get from collecting rents? This is the entire game! Everything else in the game is in support of this. So the house rule that you can't negotiate until all property has been purchased--or hell, the fact that many players don't ever try to negotiate at all--breaks the game because it keeps you from actually playing the game. In fact, if you want the game to be over in less than an hour--which is completely reasonably--then you should start negotiating hard and early. This is, believe it or not, a game that rewards aggressive playing.

Dice-movement and auctions work as a property-distribution engine. One of the rules that gets most overlooked is that if you land on a property but don't buy it, it gets auctioned off to all players. Players each start with $1500, but this isn't nearly enough to obtain all the property, especially in a low player-count game. Auctions accelerate the game because they allow properties to be bought up quickly and cheaply in the mid or late game. They also help balance things out. Typically after a couple of trips around the board, everyone is cash-tight, except for that one player who kept landing on other people's properties or went to jail early on. With auctions, that unlucky soul now has an opportunity to buy up lots of properties cheap. Sure, they're the properties that no one else wants, but having quantity makes up for that a little. When you play without the auctions, you're slowing the game down and removing its biggest natural balancing mechanism.

Money is a timer. Repeat after me: money is the not the goal of the game, it's the way you eliminate people. It doesn't matter how much you have, as long as you have more than zero. The game slowly bleeds money away from you. Yes, you get $200 for passing Go, but you have taxes, bail, mortgage interest, Chance and Community Chest cards--to say nothing of actually purchasing property and building on it. All of that works to remove money from the game, to put more pressure on players until they have to drop out because they're bankrupt. So house rules that put more money into the game or keep money from leaving the board are just adding more time to it.

So yeah, house rules break Monopoly. That first thirty minutes or so that's pretty exciting--that should be most of the game. There's no reason a two-player game should ever last more than about forty minutes if you follow all the rules and build/negotiate aggressively. And concede quickly. People hang on too long. You know when you're beat, so don't bother hanging on for another three turns just because you think you might turn it around.

But that's not how people play it. Instead, they break the game's internal timer, turn off its accelerators, and don't ever get around to the bit where they get to make meaningful choices. And then they wonder why it's boring, random, and takes too long.

That's what I think, anyway.