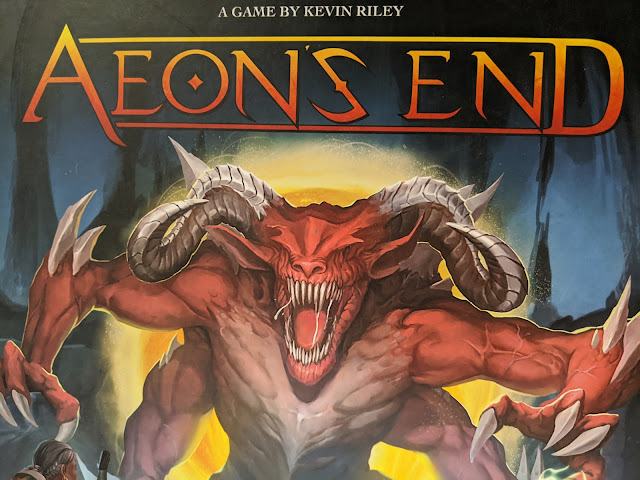 Long ago The Nameless invaded through magical breaches in reality and pushed humanity almost to the brink of extinction. The survivors rallied at a secret underground city called Gravehold and began training mages to fight back, harnessing the power of the breaches to perform powerful magic spells. Every so often, one of The Nameless attacks, and the mages must work together to defeat the monster--or, failing that, survive the attack--and prevent the utter destruction of Gravehold.

Aeon's End is a scenario-based fully cooperative fixed-market deck-builder from Action Phase Games--now owned by the ironically-named conglomerate Indie Boards and Cards. The original edition came out in 2016 with a Kickstarter campaign and there have been regular updates to the franchise ever since. The gimmick for this game is the twist it puts on deck-building. In a normal deck-builder, you acquire cards that go into your discard pile, and when your draw pile is empty, your discard pile gets shuffled to become your new deck. In Aeon's End, there is no shuffling. Your discard pile gets flipped over to become your draw pile, making your card sequence 100% predictable and enabling you to plan your turns out several rounds in advance. However, the specific turn sequence is randomized, so you can never be sure if you're going to get a chance to attack before the nemesis takes another shot at you. 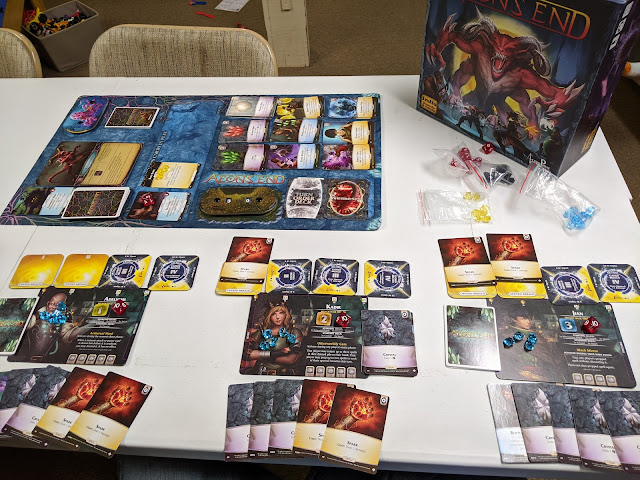 (Just a quick note to say that while I'm playing game content from the base game, I'm using upgraded components from more recent expansions.)

In Aeon's End, you and up to three of your friends take on the role of breach mages working together to defend humanity against The Nameless, a monster whose scenario drives the game. There are four in the base game that cover a broad swath of difficulties and scenario types. The Nameless plays a card from its deck (the deck is ramped to get more difficult as the game progresses) that may be an instant attack, a "power" attack that is much stronger but delayed by a few turns and generally preventable, or a minion who will do persistent effects for as long as it's in play. The main mechanism for driving scenarios is "unleashing" which may mean putting drones into play, advancing a doomsday track, or just building up to stronger attacks. Here I'm playing the starter scenario against a Nameless called Rageborne, and his "unleash" mechanism is to add fury tokens. When they aggregate, they cause "strike" cards to be played, which are like regular attack cards only much worse. 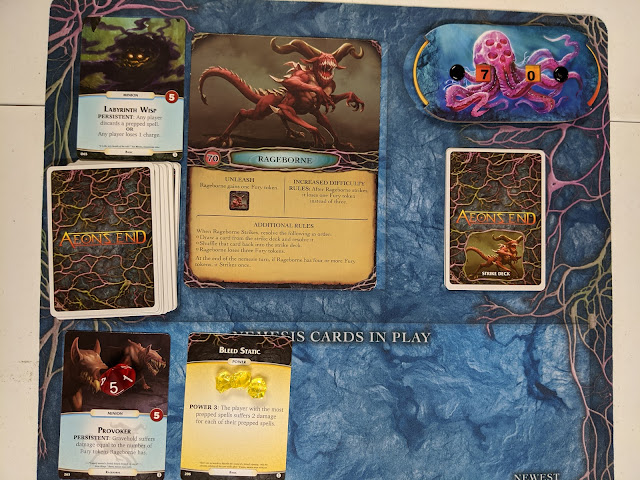 On your turn, you have a lot to do to power up your mage, mitigate current threats, and put together your attack engine. Each mage (there are six in the base game) has a unique starting hand, starting deck, and starting positions for your magic breaches--this is important because you use your breaches to cast spells, and you have to spend resources to either open or focus them. Additionally, you have a unique ability that you can use, but it has to be charged up first. 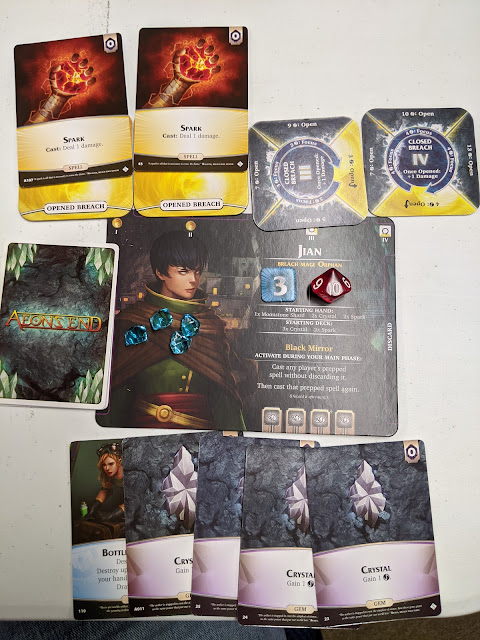 At the very beginning of your turn, you can cast any spells you have prepped to breaches--and this will be the source of most of the damage you do. After that, your turn-proper begins. Your gems generate resources that can be used to acquire gems, relics, and spells from the market, focus or open breaches, or charge up your ability. Relic cards can be played with an instant effect, and you can prep spells to your breaches so they'll be ready to cast on your next turn.

As mentioned above, this is a fixed-market deck-builder in the mold of Dominion, but the stacks aren't very large, and there's more emphasis on weeding weak cards out of your starting deck than on purely adding strong cards in. You're not deck-building in the traditional sense. You're putting together an engine. Since your deck is never shuffled, the order in which you buy and discard cards becomes very important, because you don't want to be stuck with a hand of nothing but spells when you need to acquire cards or with nothing but gems when there's a minion to defeat. 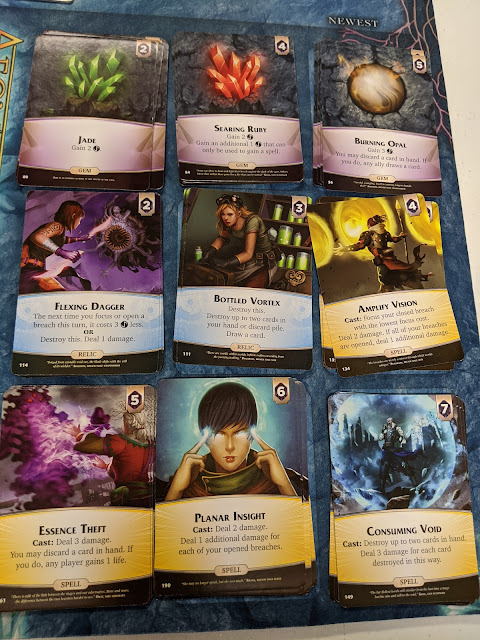 There is one deck in the game that is consistently shuffled, and that is the Turn Order deck. It consists of six cards: two nemesis cards and four player cards. There are two of each in a two-player game, one of each in a four-player game, and one of each plus a wild in a three-player. (By the way, three-player is the ideal way to play the game. It gives you just a little bit more leeway in how your power up your characters.) 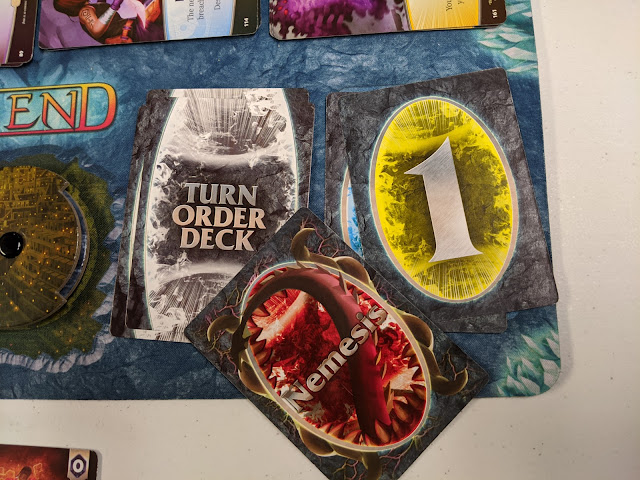 If your mage runs out of health, you're still in the game, you just get "exhausted" which means you have some limitations on what you can do and damage to you goes to Gravehold instead. If all of the mages become exhausted, or if Gravehold runs out of life, the game ends and you lose. If The Nameless runs out of health, then you have defeated it and victory is yours. 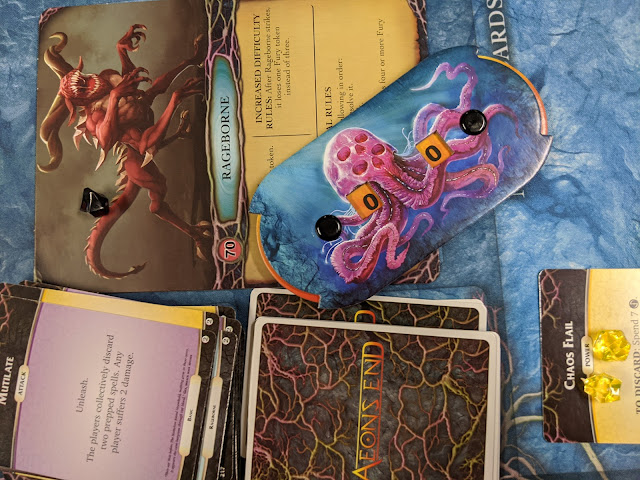 Alternately, you can just run through the entire villain deck without losing. That also counts as a victory. Surviving to fight another day is still a win.

I love cooperative games, I love deck-builders, and I love any game that takes an established game mechanic and tweaks it in an interesting way. Aeon's End does all three. It has amazing art and a surprising variety of gameplay. The fact that spells can't be cast in the same turn that they're played means that they flow through your deck at a different cadence than your other cards do. You begin to see the virtue in leaving them prepped so you have one at the ready if a minion comes out. It also means you have to plan things two and three turns out, which gets tricky because of the turn order randomization. The best laid plans can get completely scuttled when the nemesis has three turns in a row! Meanwhile, the unique composition of mages and their decks has you looking for synergies that will get you set up faster, cycle your deck, bounce powerful cards, and cast spells out of turn. One key to my victory in this game was Jian's Black Mirror ability to cast another player's prepped spells out of the turn twice. Plus, because it's fully co-op, it works great as a solitaire game. You just play as many characters as your brain can keep track of.

Like most deck-builders, especially fixed-market ones, set-up and tear-down is a pain. The first run of the game had some flimsy components and not enough starter cards for each mage to have a pre-built deck at the ready. The most recent stand-alone game, Aeon's End: The New Age, has a campaign mode that leans hard on a story that mostly doesn't work. The writing is so bad. So, so bad. Finally, because it's such a difficult game, you frequently find yourself an hour or more in and losing because the Turn Order deck didn't swing your way at the end. That sort of thing will either frustrate or invigorate you.

Oh heck yeah. There are three different stand-alone games, each with minor expansion packs, as well as a legacy game, component upgrade packs, and a playmat, and all of the games integrate. In fact, if you back the Kickstarters you wind up getting a lot of content at once, which can be a little overwhelming.

There's also a digital version from Handelabra, if you'd like to try it out on a computer.

I don't play a lot of heavy games, but I love this one (bad writing and all). Once you get the hang of it, it plays very quickly. It really pushes the envelope of what a deck-builder can be and the unique spell-casting mechanics are a lot of fun. The brutal difficulty forces you to plan carefully, but it's truly rewarding to get a good engine going. You spend round after round scraping to survive while you ramp yourself up, and then all of a sudden the tables turn and you're doing ten and twelve points of damage in a turn.

Tune in next week when we'll be building in the Cathedral, arresting our opponents' workers, and robbing the tax stand in Architects Of The West Kingdom...
In Acquire-To-Zendo, Kurt is going through his favorite board games in alphabetical order. Read the explainer or see more posts.