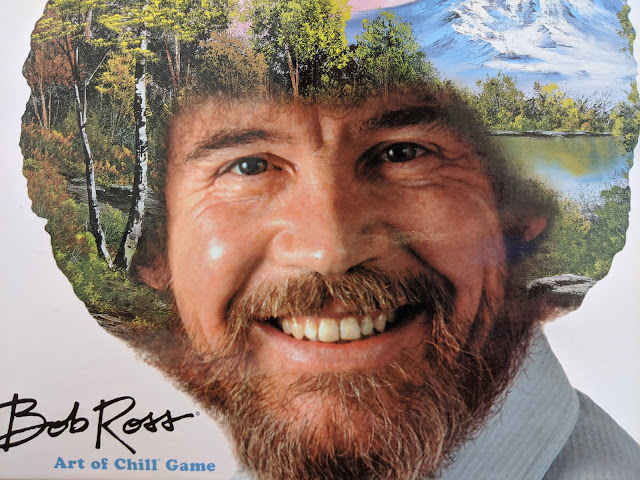 In 1983, high-school dropout and retired 20-year Air Force veteran Master Sergeant Robert Ross started an instructional painting show on public television called The Joy Of Painting. He had learned to paint during his military career and had grown tired of shouting at people, so upon his retirement he resolved to never have a job where he had to raise his voice again. His show ran for eleven years, and during each 30-minute episode, Ross would complete a pastoral scene and talk through this process while he did it. It sounds boring, but it's surprisingly meditative. Ross is a soothing presence, and it's genuinely compelling to watch him complete a painting so quickly. He was a rare individual.

Bob Ross: Art Of Chill Game attempts to capture his singular style and attitude in a lightweight set collection game, and the result is kind of amazing. 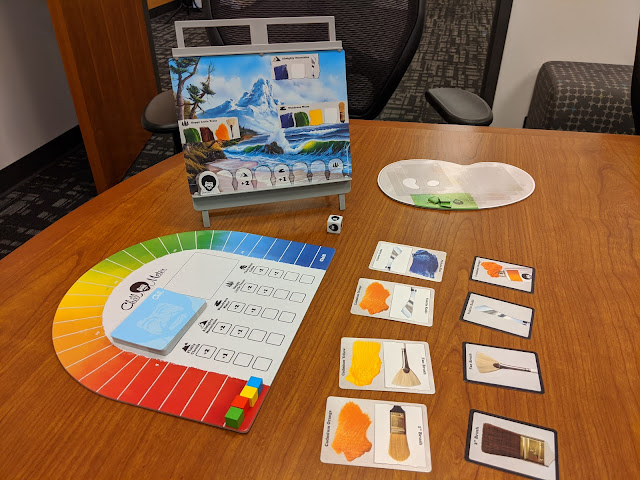 In Bob Ross: Art Of Chill Game, you and up to three friends are painting along with Bob, trying to complete features by mixing the proper paint colors together on your palette and then painting them by using the appropriate tools, all in pursuit of "chill" points. 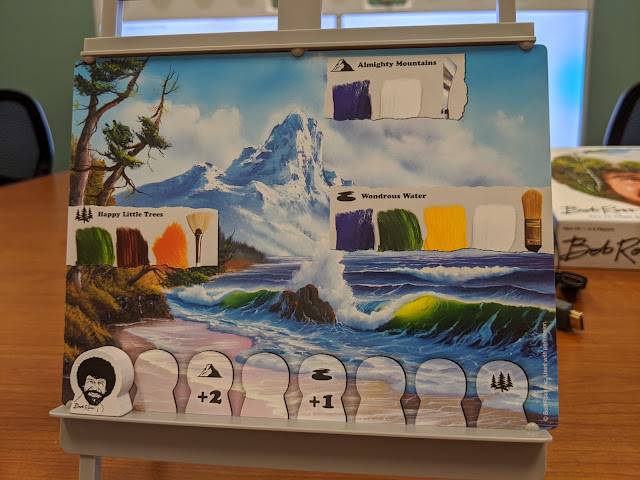 When you set up the game, you put an easel on the table with a piece of art on it. This piece of art will have three features, along with the art supplies that are required to paint them. Along the bottom of each piece of art is the Bob track, and as the game progresses, Bob will move along it, painting features. Once anyone--a player, or Bob--finishes all three features, the painting is replaced with a new one. 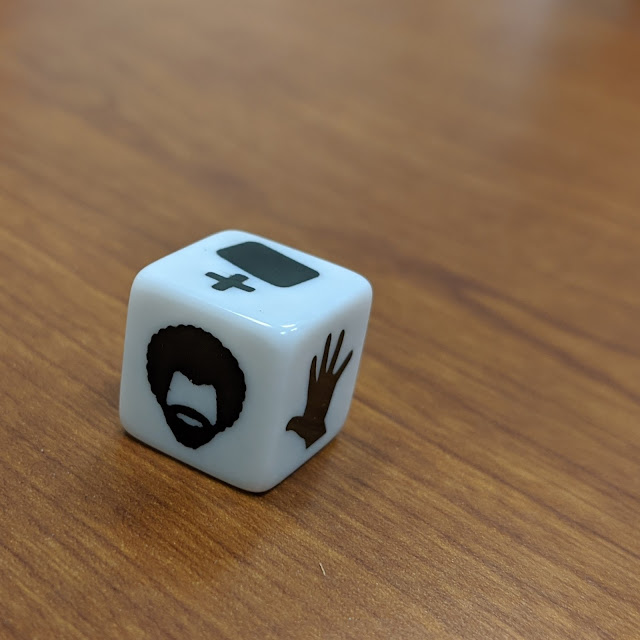 On your turn, you roll a die and resolve its outcome. Die rolls either give you a free action or they advance Bob along the track. When Bob advances, you also flip a Chill card, which will give all the players a bonus of some kind--maybe free card draw, or loosened feature-painting restrictions, or bonus points for using a certain color. Or maybe Bob decides to just chill instead of advancing this turn. 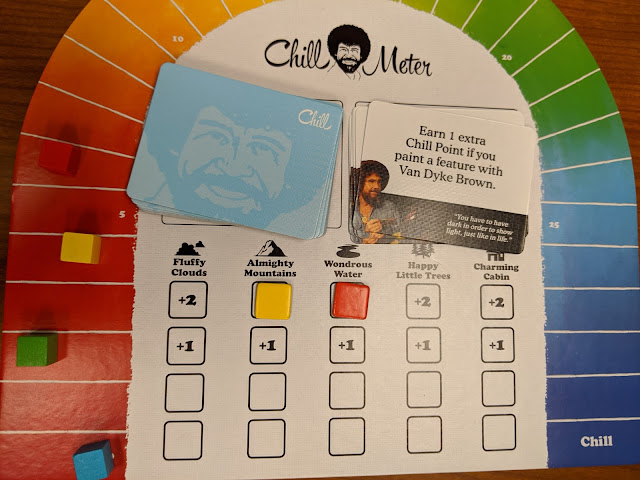 After that, you take three actions that are any combination of the following: take an art supply card, put paint on your palette, paint a feature, clean your palette, refresh the art supplies, or master a technique. Art supply cards each have a tool and a color, and can be used for either. 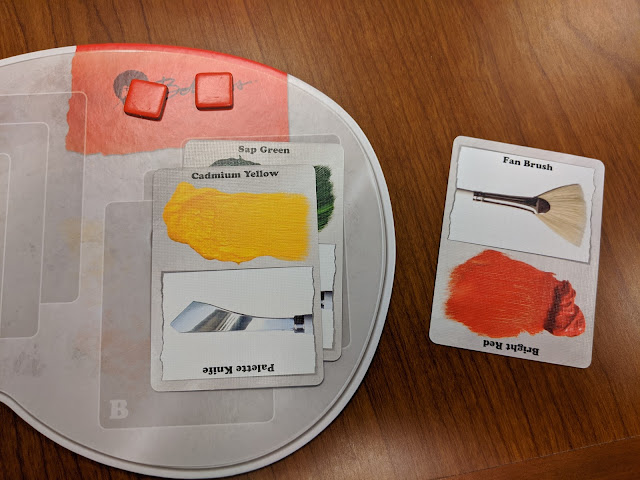 In order to paint a feature, you need to have all of the right colors--and only the right colors--on one or both sides of your palette, and play the right tool from your hand. You get chill points based on the complexity of the feature, the number of players who have already completed it, and whether or not Bob has completed it according to the Bob track on the painting. 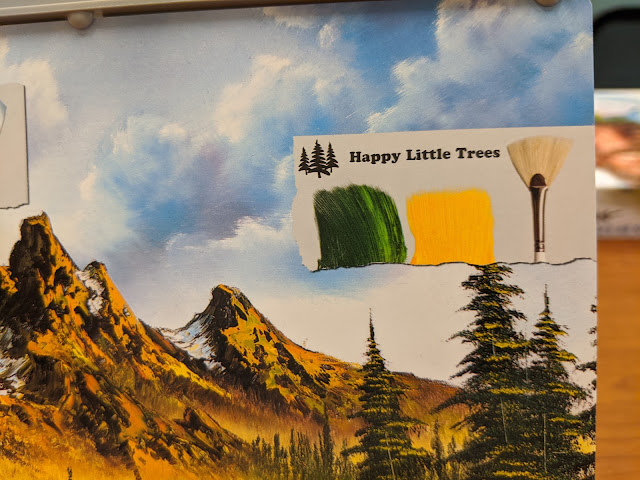 The other source of points is mastering a technique. There are four technique cards available to master at any given time. In order to master one of them, you simply discard two cards with the matching art supply on it. Doing so gets you an instant two-point bonus and an additional bonus point any time you use that supply in a feature. (Note that it does not replace having that art supply either in your hand or on your palette--it only gives you a bonus for using it in the future.) 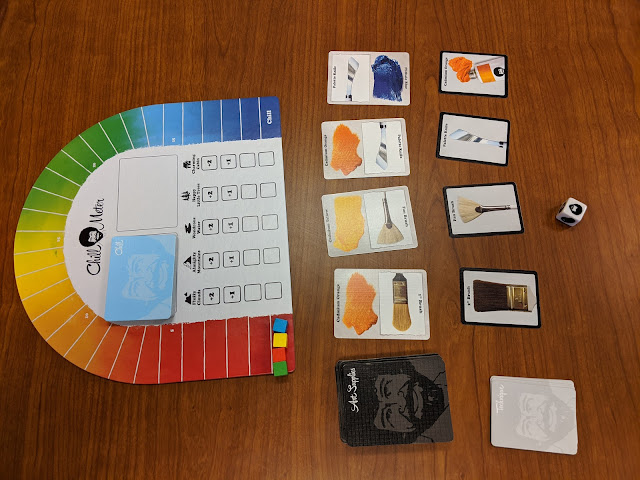 The first player to reach thirty points is the winner. Since you can only score points on your turn, there is no possibility of tying. But really, everybody who plays is going to have a pretty chill time, so in a way we're all winners.

It's so dang charming. The fact that you are competing to finish features like "Happy Little Trees" or "Almighty Mountains" in order to gain "chill" points forces you to accept the game on its own terms, and the terms of this game are "relax and have fun". Even though it's competitive, it's not aggressive. When Bob cards come out, they offer a bonus to every player. When you paint a feature, you aren't blocking other players from painting it, only keeping them from getting quite so many points when they do.

There's just enough to do. Painting the whole thing faster than Bob is impossible in a four-player game (as in real life--as anyone who tried to paint along with the show can attest), and you may just not have the right cards to pursue any available features in a reasonable time frame. Because drawing cards, applying them to your palette, and actually painting are all separate actions, it generally takes two to three rounds and a fair amount of planning to prioritize what features you're going to go after. And if you're just not getting lucky with the cards, you can always focus on technique mastery instead or just gather supplies so that you'll be in a more favorable position when the next painting comes out.

It's easy to learn, it's full of gorgeous Bob Ross original art, and the price point is kind of shockingly low--last I checked you could find it at Target for $18.

Not to put too fine a point on it, but this has all the telltale signs of a game that was put together quickly on the cheap. It doesn't scale very cleanly from two to four players. The fact that game progression is determined by a die roll makes it feel rather random and arbitrary at times. The cards are flimsy and start to get kinda mealy after a few plays--but every deck has cards of a different size, so have fun figuring out how to sleeve them. There's no balancing to adjust for first-player advantage. And while it's a fun game, it's an incredibly simple one, and it's one that you start to get bored with right around the time someone wins it. On the one hand--hurray for not being overlong. On the other, you're not likely to want to replay it very soon.

Nope. There is also a Bob Ross party game called Happy Little Accidents, but it's unrelated. It would be pretty simple, though, to put together an expansion with new art or a deluxe edition with more robust components.

The general consensus I've gotten from fellow gamers is that this game is far better than it has any right to be. It looks like a quick-and-dirty cash grab title, but it makes up for weakish gameplay mechanics with an incredibly charming aesthetic and a wonderful attitude.

Tune in next week when we root-root-root for the home team in Bottom Of The 9th...
In Acquire-To-Zendo, Kurt is going through his favorite board games in alphabetical order. Read the explainer or see more posts.