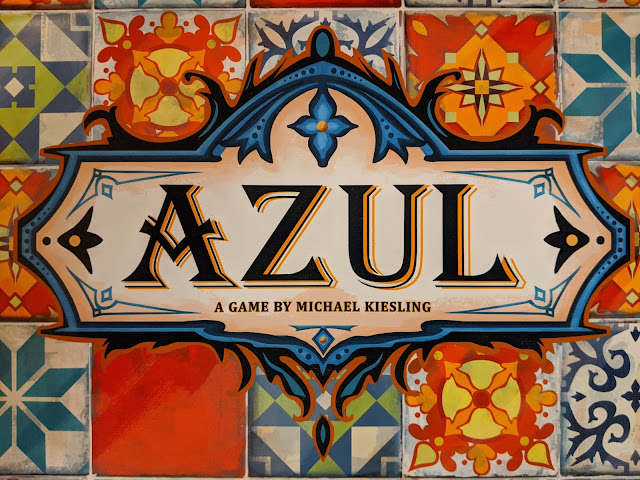 Azul is the first in a series of tile-drafting and placement games (the others are also called Azul, which is only slightly confusing--they're Azul: Stained Glass Of Sintra and Azul: Summer Pavilion). It's set in Portugal during the reign of King Manuel I. On a visit to Southern Spain, he saw an alhambra that was decorated with blue-and-white ceramic tiles called azulejos that had been introduced by the Moors. The king was so taken with them that he demanded his palace be decorated in them as well. So for the second week a row, we have a game about architects trying to say in the good graces of the King!

Azul was created by Next Move Games who are committed to making light games with deep strategic potential and four-letter titles. And if you think I'm making that up, no really, it's in their mission statement. In addition to the several Azul games, they have Reef, Tuki, and 5211. 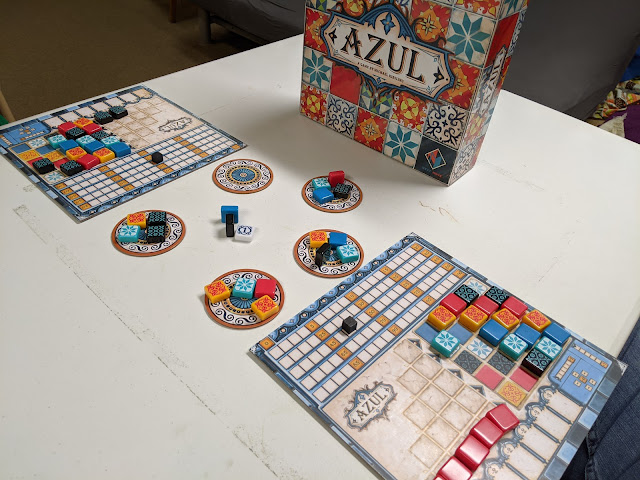 In Azul, you and one-to-three friends will take turns drafting tiles from the five-to-nine (depending on the player count) factory displays. Each display has four tiles, and when you draft, you take all of the tiles of one color. Anything you don't take gets pushed into the center of the table. 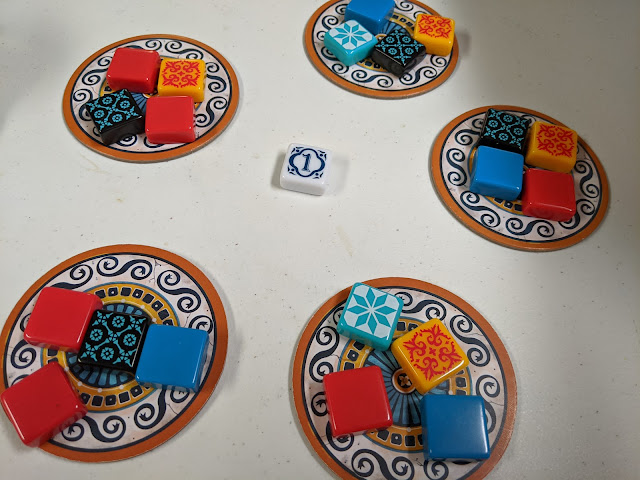 The tiles you take go into one of the pattern lines on the left of your player board. Pattern lines must have only one color, and it must be a color that you haven't already filled that line with. Anything you take but can't use is considered "breakage" and you'll get a penalty for it. You can also take tiles from the middle. The first person to do so takes the first-player token (the white "1") as breakage. Yes, they get a penalty, but they'll be the starting player on the next round. 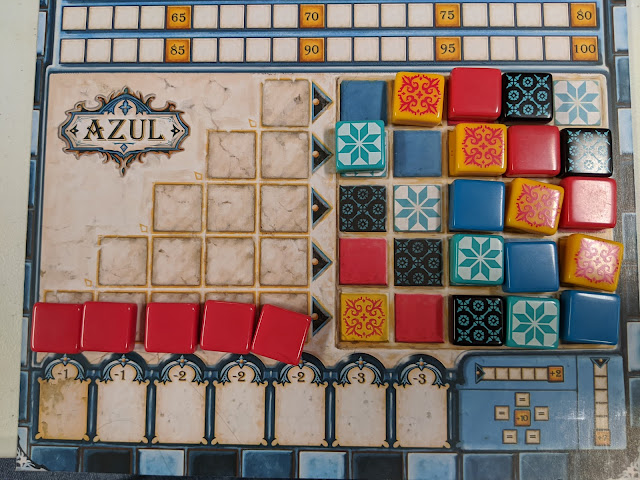 Once all tiles have been drafted, you take any filled rows (on the left) and move a piece over to your wall (on the right), discarding the others to the box lid. You score points based on the number of tiles in a contiguous row or column with the tile you just placed, so individual tiles can get anywhere from one to ten points. You then refill the factory displays from the draw bag and start the next round. If the draw bag is empty, you refill it from the discarded tiles in the box lid.

Play continues until someone has a completed horizontal row. At that point, the game is over, and you add any end-of-game bonuses for completed rows or columns or for having all five tiles of a color on your wall. Whoever has the most points wins. 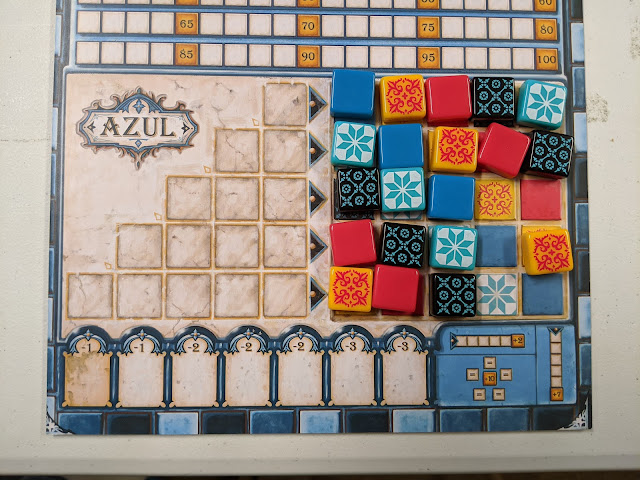 Here's the winning board from the game I played in order to get these pictures. The winning score was 108. And my 8-year-old would like it to be known that he beat me by twenty points.

This is the platonic ideal of a eurogame: simple, elegant rules that give way to deep strategy. It's competitive but still friendly. Setup and tear-down are a breeze; setting up for the game is roughly as much effort as setting up for another round. It scales cleanly from two to four players. The mechanics are intuitive, the play-time is very reasonable, and the design is gorgeous. The player boards and tiles look incredible, and the tiles feel great. Even the tactile experience of digging them out of the bag is satisfying.

My kids can play this (and beat me, apparently). My parents can play this. My wife, who is the most casual of gamers, will play this three or four games in a row. I'll take it to board game conferences and people are always happy to see it come out to the table. And for all of that amazingness, the price point is very reasonable--you can pick this up at Target for $30.

There are two minor design irritants that have been corrected in later Azul games. First, having an individual score-tracker on your player board means that it takes more effort to know what your standing is relative to the other players. You can't glance a tracker and see the positions, you have to look at each player board, mentally convert the positions to numbers, and then remember those numbers. Also, it means that if your board gets jostled, you basically have no idea what your score is, and since you're continuously adding and removing tiles to and from your board, the potential for jostling is quite high.

Secondly, putting tiles into the box lid and then getting them back into the draw bag from there is a little cumbersome. There is a high potential for spillage, and unless you're playing a two-player game and you play the minimum number of rounds to trigger the endgame, you're going to need to refill the draw bag at least once, as there are enough tiles to get through five rounds of a two-player game without refilling.

Stained Glass Of Sintra and Summer Pavilion include a master score tracker and a "tower" to put old tiles into whose mouth is smaller than the draw bag.

One final thing, and this is not a complaint, but it feels like a missed opportunity. There's a more challenging mode of gameplay that uses the reverse side of the player board where the tile walls are blank. You can place anything anywhere so long as you don't repeat a tile color in a row or column. I know a lot of people who love this game, and I've never met anyone who actually prefers this mode of play.

Not really, but as mentioned above, instead of putting out expansions, Next Move Games is putting out individual Azul games that have similar mechanics but are playable singly. Although it looks like there is a Crystal Mosaic expansion to the original due out this year that's mostly there to put divots in the score-track to eschew the aforementioned jostling issues.

Stained Glass Of Sintra and Summer Pavilion are based on similar mechanics, but they trade away some of the simple elegance for more complex strategy. They're both really good--and indeed, some gamers prefer them to the original--but I prefer plain old vanilla Azul. There's also a version called Giant Azul that comes in a briefcase and has boards and pieces that are double the width and depth. So, basically, it's the same game, four times as big. It's very gimmicky and definitely not worth the $300 price point, but it's worth playing once if you get the opportunity.

Azul is just dang-near perfect. If you had to ask me what my all-time favorite board game is, there's about a 50/50 chance I'd say this one.

Tune in next week when we paint some happy little trees with Bob Ross: Art Of Chill Game...
In Acquire-To-Zendo, Kurt is going through his favorite board games in alphabetical order. Read the explainer or see more posts.