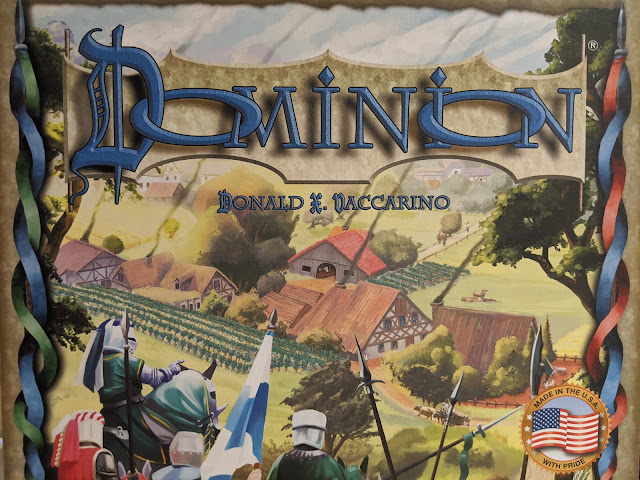 Donald X. Viccarino (can we take a moment to revel in how cool his middle initial is?) was a game hobbiest who got heavily involved in Magic The Gathering in the late 90s and early 00s. In 2006, he was working on a fantasy game called Spirit Warriors II and struggling with a mechanic where cards would be acquirable over time. One of the variations he played with was to just make all of those acquirable from the very beginning, laid out in a market. When he demo'd this to his local gaming group, it was an immediate hit. And thus was born the prototype for a new style of game: the deck-builder. Over the next year he would tweak and re-theme the mechanic, selling it to Rio Grande Games and launching one of the most innovative and influential franchises in gaming: Dominion. 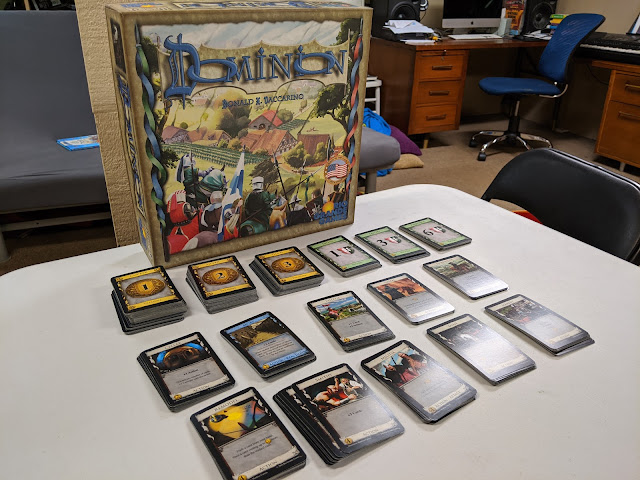 In Dominion, you and one-to-three friends are monarchs with modest amounts of land income, and with aspirations to expand your holdings. You start with a ten-card deck consisting of seven Coppers and three Estates, worth 1 money and 1 victory point each, respectively. You draw a hand of five cards and the game begins. 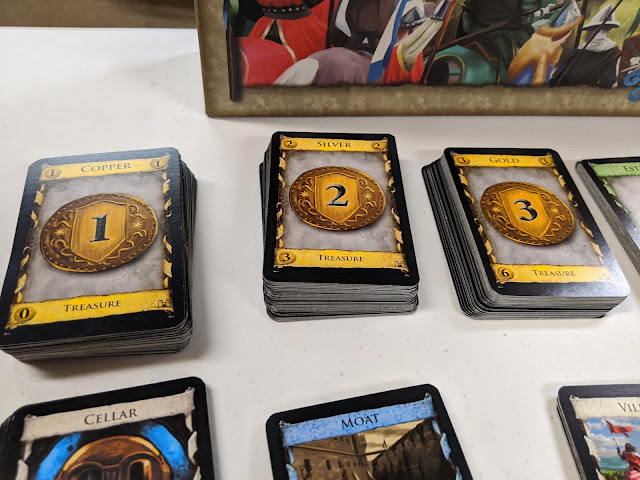 On your turn, you play whatever cards you can from your hand. You are allowed to play one Action card from your hand--if you have any, which you don't at the start--and perform one "Buy", using the sum of the Treasure cards in your hand to acquire a card from the market. The cost for these cards is printed on the bottom left. You can, for example, use your Treasure to acquire even more Treasure. But the real meat of the game is in the Kingdom cards. 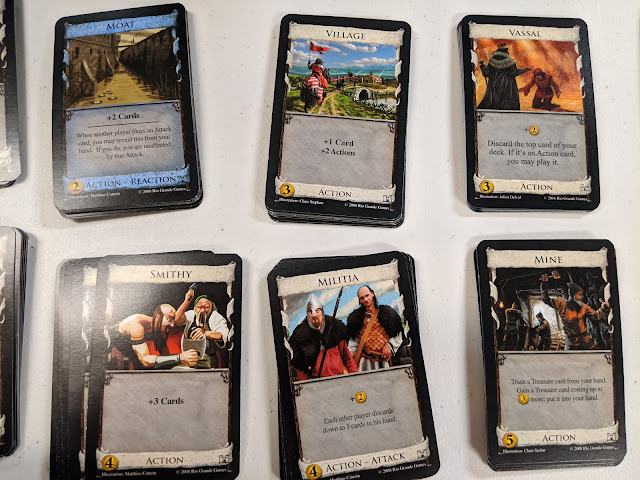 A game of Dominion will always include ten stacks of Kingdom cards that perform a variety of services for you. A Smithy lets you draw extra cards. A Village gives you an extra card and the ability to perform extra actions. A Mine will let you trade in a Treasure card for the next highest value Treasure. Some cards are Attack cards: a Militia gives you extra money and forces other players to discard. Some will let you defend against Attacks: a Moat gives you extra card draw, but if you have it in your hand, you can ignore the effects of, for example, a Militia. 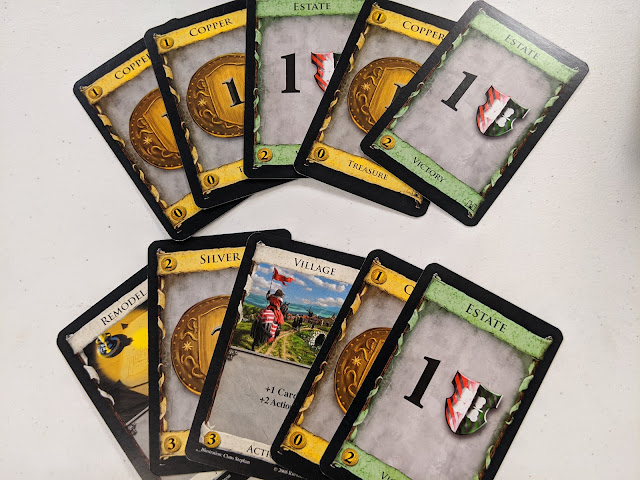 At the end of your turn anything you played, anything you acquired, and anything leftover in your hand goes into your discard pile, and then you draw a new hand of five cards. Keep in mind that your starting deck only has ten cards in it, so two rounds into the game, everyone will have played through their entire deck. When your deck is empty, you shuffle your discard pile and it becomes your new deck, which now contains any cards you acquired since your last shuffle. Ergo, as the game progresses, your hands become stronger and stronger, as shown in the picture of a typical starting hand and an example mid-game hand above. 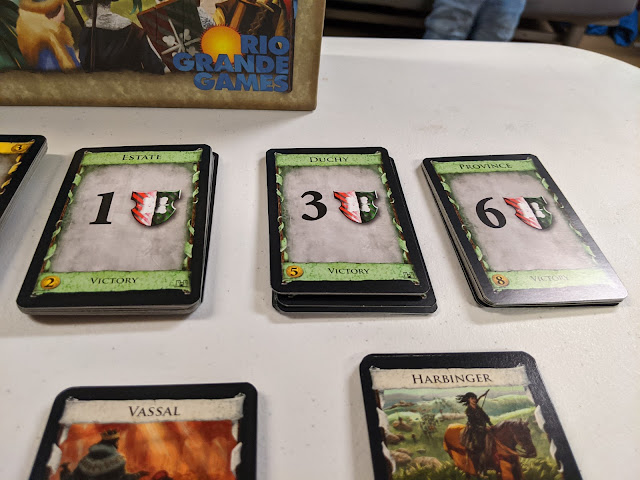 Once you've built up your deck, it's time to start acquiring Victory cards, in the form of Estates, Duchies, and Provinces. You don't want to acquire them too early because you can't do anything with them and they take up space in your hand. But when you can consistently afford Provinces, then it's time to start buying. Once the Province stack or any other three stacks are empty, the game immediately ends, and whoever has the most Victory points in their deck wins.


What Makes It So Good?

Stepping back from the game itself, let's take a moment to look at the impact it had on gaming. This game is twelve years old, and in that time it has spawned an entire genre. People have taken this mechanic and really run with it. AEG's Trains is a thinly-veiled re-skin that adds a board and a waste disposal mechanic. Ascension: Chronicle Of The God-Slayer adds a dual-currency mechanic with a variable market track to streamline gameplay and tear-down. The Nightfall games experimented with combat and an elaborate card-chaining mechanic. Thunderstone combines deck-building with fantasy dungeon-crawl elements. There are small-box deck-builders like the Valley Of The Kings games and epic scenario-driven games like Upper Deck's Legendary series. Hell, there have been two other deck-builders on this list so far, and we're still in the D's!

But setting aside the legacy of Dominion, is Dominion even really that good?

Well... yeah, it really is. And it stands out for a number of things that the game designers got right in the very first iteration of the game. For one, there are a lot of cards in here--500, actually, and more than half of those are the 26 (or 25 in the first edition) stacks of Kingdom cards, of which you will only ever use ten in a game. That makes for a lot of replayability. 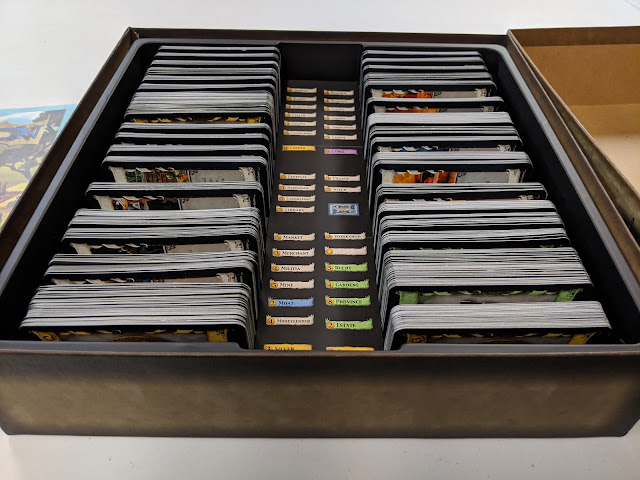 Gameplay is solid and simple. Future expansions add more complexity, but the base game wisely keeps things fairly stripped down. Deck-building is not an innately intuitive game mechanic, so it helps that this one is free of too many bells and whistles. I've been able to teach this game to a number of people who had never played a deck-builder before, and usually about halfway through their first game, it all clicks into place.

But even with the simplicity, there's a lot of room for strategic depth. You can find a path to victory by buying up lots of Villages and Markets and developing an engine that lets you draw and play tons of cards every turn. Or you can focus on cards that let you excise weak cards from your deck. You can play aggressively, relying on a lot of Attack cards. You can focus on Treasure instead of Actions. And the best strategy is going to vary depending on which Kingdom cards are in play.

In fact, the instructions even outline a few different strategies and provide market setups that would facilitate them. It also includes a randomizer deck if you want to just see what happens. And once you get the hang of it, it's a chill game that plays quickly. I have a friend who can play this with his wife in about ten minutes, so they'll play four or five games in a sitting.

The biggest complaint you hear about Dominion is the same one that chases deck-builders around: tear-down is kind of a pain because you have to sort your entire deck. A common one that's specific to this game is that there's not usually very much player interaction. It can very easily feel like competitive solitaire. Apart from that, the cards are a little flimsy, and the box has a ton of unused space in it. It has a very cool insert in that it provides slots and labels for each deck, but you could fit this game in a quarter of the space, easily.

One of the nice things about deck-builders--especially fixed-market deck-builders--is that they are very easy to expand. In the case of Dominion, you just add more Kingdom cards. You can mix them in with your existing stacks, or you can play them independently. At present, there are thirteen expansions, not including storage solutions or base set-up cards (that make expansions playable by themselves). These are usually themed around a new mechanic introduced across the new cards. Cornucopia cards benefit from having variety in your deck. Dark Ages cards are themed around cards being trashed--that is, excised from the game. Guilds adds coin tokens that can be banked and used to boost card effects. Prosperity introduces higher-tier Treasure and Victory cards, as well as more expensive Actions. All told, there are about 4,000 cards available in the various expansions and the base game that are all able to be integrated with each other.

Not only did it invent one of my favorite genres of board game, it's a great game in its own right that offers vast replayability and a lot of strategic depth.

Tune in next week when we update Connect4 with geometry in Drop It...
In Acquire-To-Zendo, Kurt is going through his favorite board games in alphabetical order. Read the explainer or see more posts.