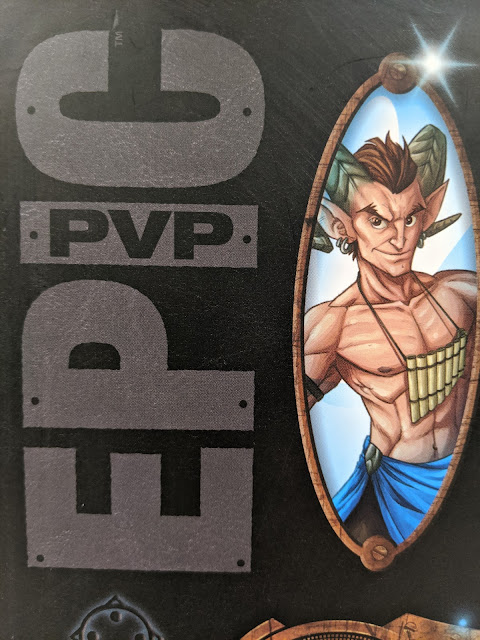 An orc paladin, a dwarf monk, a high elf barbarian, and a cat samurai walk into a bar, decide they hate each other, and start throwing punches. Who will win? Who will get the tar beaten out of them? Who will be left picking up the tab? 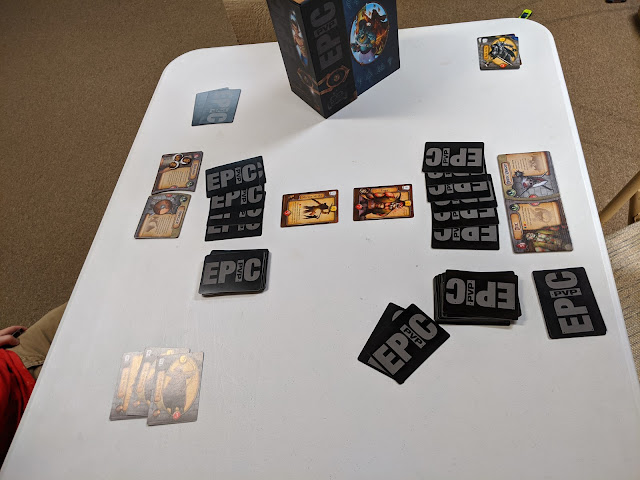 In Epic PVP: Fantasy, you and one other player--yes, this technically has rules for three and four, but it is intended to be a two-player game--will take turns playing moves and counter-moves until one or the other of you has run out of life. It's a take-that game that combines a few different mechanics. The first one is shuffle-building, borrowed from AEG's breakout hit Smash-Up. 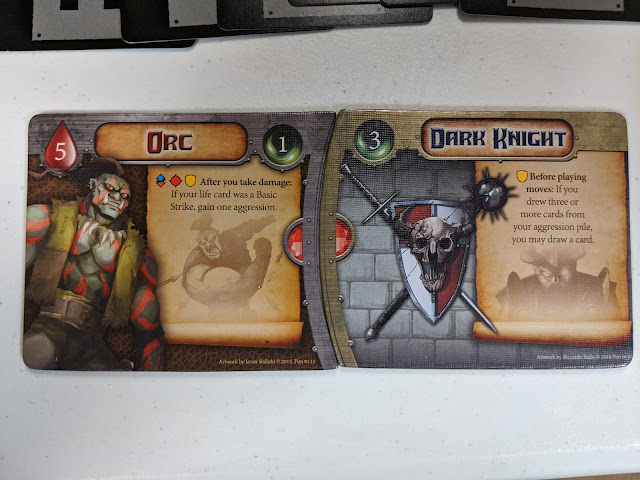 In Epic PVP, you don't have a deck. You combine two mini-decks, one representing the character's race and the other representing the character's class. Each deck has basic strike cards as well as cards that represent that character archetype's fighting style. Orcs, for example, are big and clumsy, so some of their harder-hitting cards will make them take damage if they are blocked. They also have permanent abilities described on their character card (which doubles as a divider). Humans, for example, are insightful, so they get three tokens during setup that will let them cycle cards out of their hand to accelerate their deck. 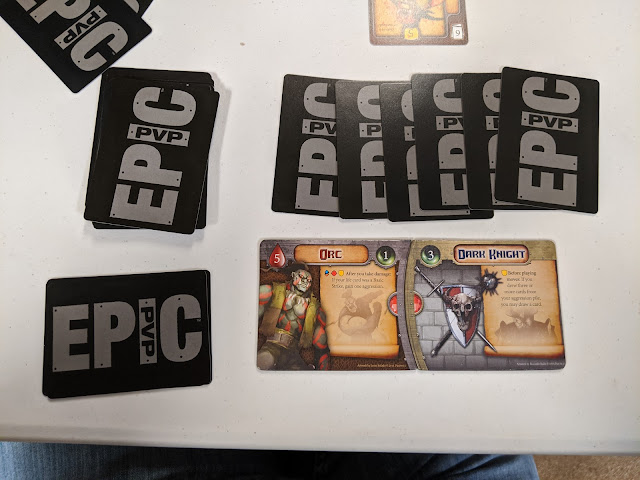 The second mechanic in play is one that I've not run across in any other game. Note the different piles of cards in the picture above. The one on the bottom left is my Life pile. An orc has five life, so I put five cards in the Life pile. When I take damage, I discard a card from it. When the pile is empty, I lose. Just above that is my deck. To the right is my Aggression pile. Every turn, you move two cards from your deck to your Aggression pile. On your turn, when you draw cards, you draw them from your Aggression pile, not from your deck. You first declare how many cards you're going to take, and then you take exactly that many. Then when you play cards, you can only play them if you have enough cards in your Aggression pile to cover the cost. E.g., in the photo below, the human character played two cards that cost 4 and 1 respectively. That player could only do so because they had at least 5 cards in their Aggression pile. The orc character responded with cards that cost 4 and 2, meaning they needed at least 6 cards in their Aggression. 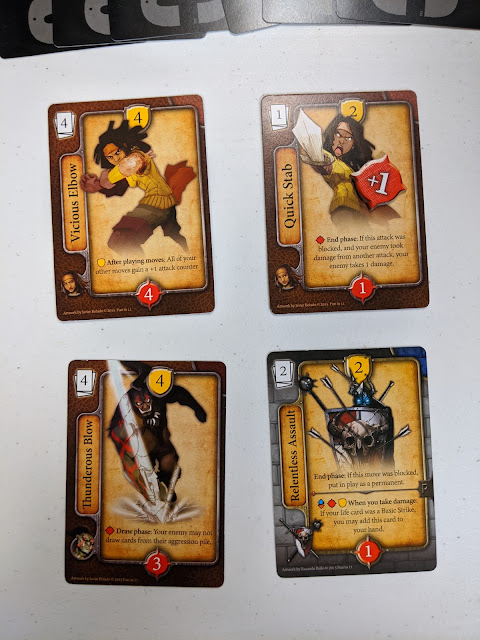 Finally, there's the third game mechanic: Every move is also a counter-move. Each card has both a block and an attack on it. When you play it, you play it face-up to you and match up your blocks against your opponent's attacks. Then the opponent's cards are cleared away, and you turn your cards around. 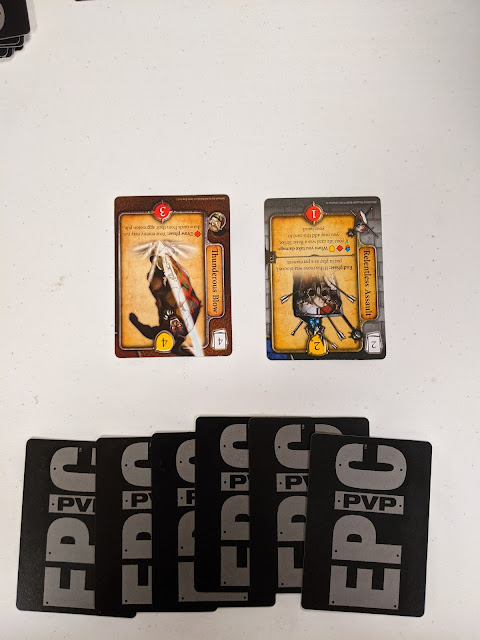 
What Makes It So Good?

I love the tension between having cards in hand and having the ability to play them. Someone's coming at you with a 4 attack, and you don't have anything in hand to block with. Do you take the hit and save up for a powerful swing later? Or do you draw from your Aggression pile and hope to get something strong enough to block but cheap enough to play? How many cards do you take to maximize that outcome? Do you try for lots of easy-to-block small attacks at the same time, meaning you'll cycle your hand and draw frequently? Or do you save up for powerful moves that can't be blocked? And you can't just map out a strategy for yourself because you have to be constantly reacting to what your opponent is doing.

Nothing in this game comes without a cost. It's a welcome contrast to most card games where card-draw is simply unequivocally good. The fact that there's hidden information in both your Life and Aggression Piles means that you can't just dive for powerful cards. And you don't really have incentive to do so anyway because you can't play powerful cards unless you have enough Aggression, and even if you did land a spectacular hit, it only does 1 damage regardless. For a take-that game, it's got a lot of strategic depth without losing the hyper-reactivity that's typical of the genre.

Additionally, there's a lot of variety here. Just look at all of these races and classes. 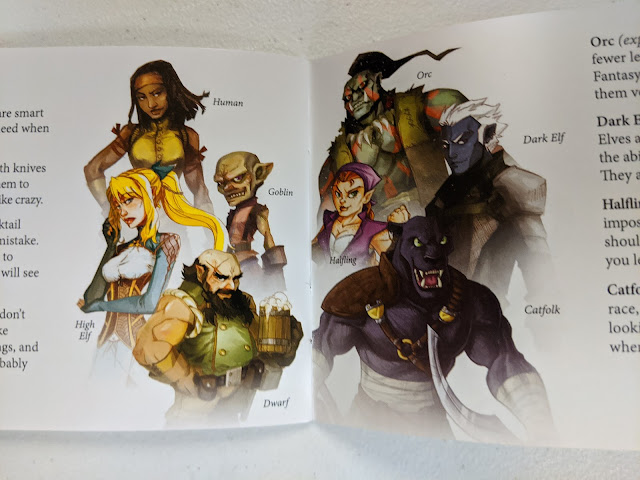 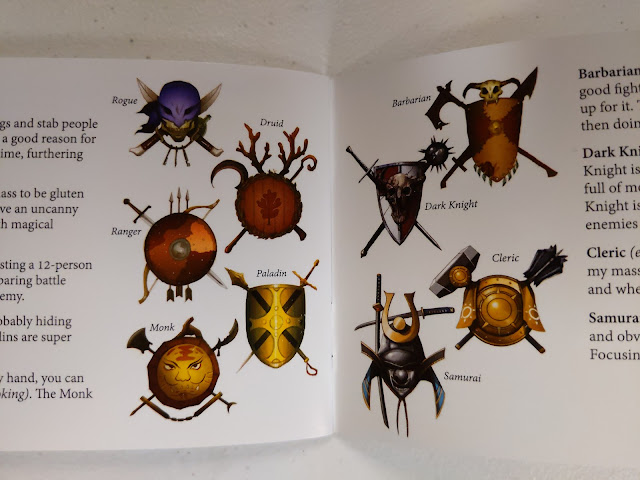 That's 72 unique combinations of individual fighter. That's a ton. Now, to be fair, I got the Kickstarter edition which includes all of these. The retail version broke about half of the content out into expansions. The game goes by pretty quickly--typically 15 to 20 minutes, the idea being that in one session you would try out three or four different combinations. The race and class cards are easy to tell apart, which makes it easy to separate your cards at the end of a game.

The game also gets at least a few bonus points for its modestly diverse cast. The race dividers are all double-sided, so if you want your halfling to be male instead of female, or your dark elf to be female instead of male, you can do that. Similarly, the class cards never show faces or identifiable body parts. It's always armor with an obscured face.

There is nothing intuitive about the way this game plays, which makes for a pretty steep learning curve in an otherwise simple game. First you have to wrap your head around the Aggression mechanic, and then you have to get used to the way the cards start out as one thing and then become something else, because while the rhythm of the game is cool, it's very unnatural. And actually, before that you have to try to make some sense of what the different races and classes mean so you can pick out something you like. It can be a lot to try to internalize, and in my experience it takes two or three games to really get the hang of it for a new player.

I also think that while the idea of using cards as counters for everything is cool in theory, it's kind of a mess in practice. It gives the game an oddly large table footprint. And then you set your hand down to take a drink or use the bathroom or something, and then you accidentally pick up your Life pile instead. And when you want to know how much Life you have, you need to pick it up and count it. But you can't do away with that because it's coupled to gameplay. The orc, for example, gets an Aggression bonus if he takes damage but the discarded Life card was a certain type of strike. So you can't get rid of it, but I'd recommend putting a d6 or something on top of your Life pile to distinguish it and to give you at-a-glance hit-point counts.

Finally, there are a lot of bits and tokens that can augment your character or specific moves. There are randomizer tokens if you don't want to pick your race and class yourself. It can get a bit messy, especially if you're digging around trying to find the three "human insight" tokens amid everything else.

There is a standalone expansion called Epic PVP: Magic that adds more races and classes (and tokens): things like a djinn, a satyr, an pyromancer, and a battlemage. That Kickstarter also had a Dark Times add on with some whackadoo things like a sporling race and time wizard class. These are all fully compatible with the base game, but they add good deal more complexity. It's all very cool, but I wish it were thematically more different from the original.

I love how unique this game is and I have a lot of fun playing it, but it's a hard one to bring to the table. You need to find exactly one person who either already knows it or doesn't mind slogging through a couple of introductory games first. I get the impression that the developers Fun-To-11 wanted to make this a big franchise but it never really took off. It's not very easy to find anymore. But hey, if you ever want to throw down, just reach out to me. Bring beer.

Tune in next week when we, er, liberate some treasures before we all drown in Forbidden Island...
In Acquire-To-Zendo, Kurt is going through his favorite board games in alphabetical order. Read the explainer or see more posts.