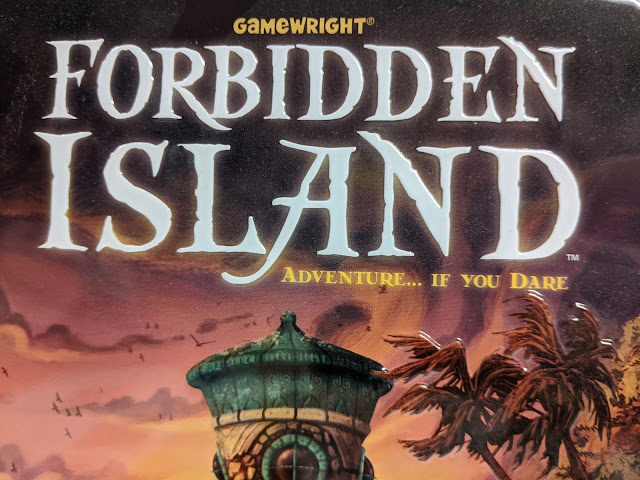 When Pandemic dropped in 2008, the world was introduced to a new type of game: collaborate board games in which the game hates you and wants you to die. It's like solitaire, but themed, and with more player agency so as to make your inevitable defeat feel even more like a personal failure. Pandemic has a lot of fans, but I'm very lukewarm on it. I acknowledge its importance, but I'd rather play something happier. Such as... Forbidden Island. 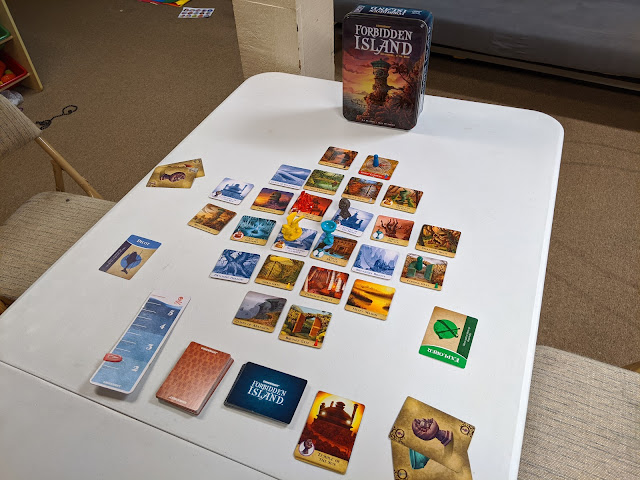 In Forbidden Island you and one-to-three friends take on the role of adventurers who have arrived on a remote and deserted island in search of treasures. Four specific treasures, actually: The Earth Stone, The Statue Of The Wind, The Crystal Of Fire, and The Ocean's Chalice. You and your fellow adventurers must travel around the island looking for clues (cards) to unlock the treasures. There's just one problem: as soon as you set foot on the island, it starts sinking. 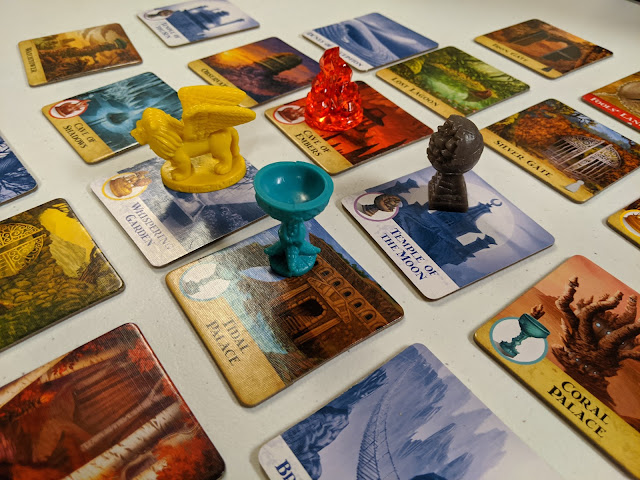 As part of the setup, six tiles are flipped over to indicate that they are sinking but not yet completely sunk. On your turn, you take three actions. You can move to an adjacent tile. You can shore up a partially sunken, flipping it back to its normal side. You can give a card to a player if they're on the same tile as you are, or you can claim a treasure, provided you have enough cards and are on a tile with that location. Players also have a role: Engineer, Pilot, Diver, etc, that gives them a unique action. A pilot, for example, can move to any spot on the island as a single action. An engineer can shore up multiple tiles at once. Once your actions are spent, you draw two treasure cards and then flip over island cards to determine what parts of the island are going to flood next. 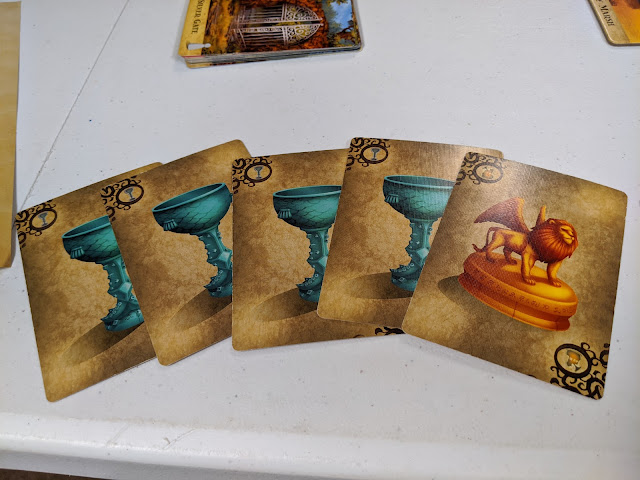 Most of the cards have a single treasure on them and you need four in order to claim a treasure token. This can be tricky as you only get two cards per turn and you have a hand-limit of five cards. Mixed in the treasure deck are some bonus action cards that can be played out of turn: Helicopter Lift that will let you move players around or Sandbags which let you shore up a tile out of turn. There are also three Waters Rise cards that accelerate the rate at which the island floods and put any already-played cards back on top of the island deck, meaning already flooding islands are more likely to come up in the deck. If a flooded island floods, it's removed from the game. 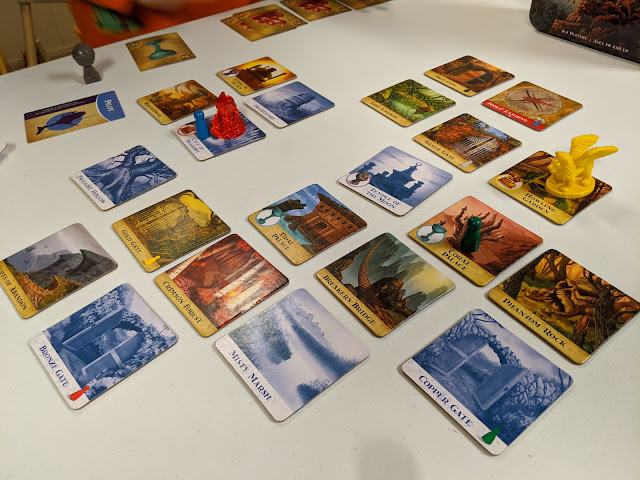 You can't shore up the island as fast as it floods, so as the game progresses, the island gets smaller and smaller. In order to win, the players need to collectively gather all four treasures and then regroup at the helicopter landing spot called Fool's Landing. Once they're all there, any player can use a Helicopter Lift card to evacuate the team to safety. 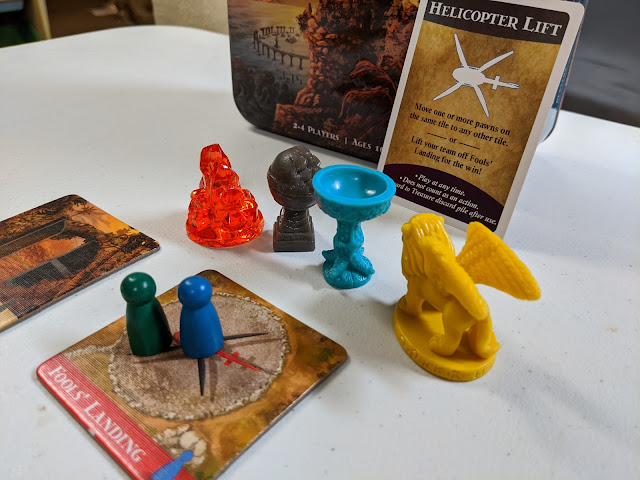 It's a well-designed co-op game that plays quickly with a fairly shallow difficulty curve, making it ideal for playing with the kids. It has a variable difficulty scale, so you can raise the challenge if the default is too simple for you. The modular board provides some decent gameplay variety, and the ever-shrinking island provides a sense of tension.

The components are pretty good for a game at its price point. The tiles are nice and thick and have great art on them, and the treasure tokens are pretty cool. And while gameplay is straightforward, there are a lot of ways to lose, so there are a number of things to keep track up throughout the game. Each treasure can only be claimed from two different tiles, so if both of them sink, you lose. If a tile sinks from out from under a player and there's not an adjacent tile that they could "swim" to, you lose. If Fool's Landing sinks, you lose.

Because of this, you have to be constantly keeping an eye on contingencies. You need to make sure that not only are the necessary tiles still in play, but each player needs a path back to Fool's Landing. You can use a Helicopter Lift to get someone out of a sticky situation, but you want to hold one back for the end game. There are only five of each treasure card in the deck, so you have to think carefully about what to discard when you come up against your hand limit, because if you have to go through the treasure deck a second time, the waters are going to continue to rise at an increasing rate.

It's a game about planning and preparing for the worst.

The modular board provides a lot variety, but it can make for wild swings in difficulty. By sheer chance in this game, we ended up with one of each treasure tile right in the middle of the board, making it extremely easy. By contrast, if Fool's Landing is one of the first tiles to flood and you get a Waters Rise card early, it can make the game extremely difficult.

The player roles aren't very balanced either. The pilot, with their ability to go to any tile for a single action, is over-powered. Meanwhile the diver can move through flooded or missing tiles, which is mostly useless early on in the game, and even later in the game is far less useful than the pilot. The fact that they're dealt out at random rather than "chosen" ameliorates that somewhat, but only somewhat.

Finally, it's worth noting that the game is themed around explorers looting an island, and that sort of thing is looked on less charitably in 2020 than it was in 2010.

There aren't expansions, but the same basic engine has been reimplemented a few times as Forbidden Desert and Forbidden Sky. I haven't played Forbidden Sky, but between Island and Desert, Island is my favorite.

It's a light, friendly game that offers some thrills and tension while still staying compact and very winnable. Great family game.

Tune in next week when we build some Gizmos..
In Acquire-To-Zendo, Kurt is going through his favorite board games in alphabetical order. Read the explainer or see more posts.