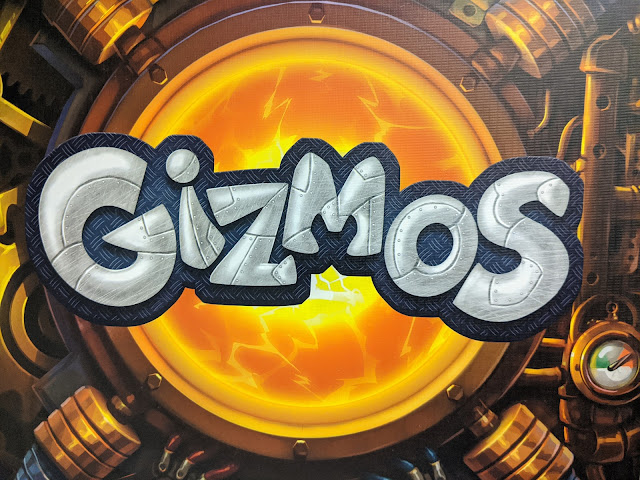 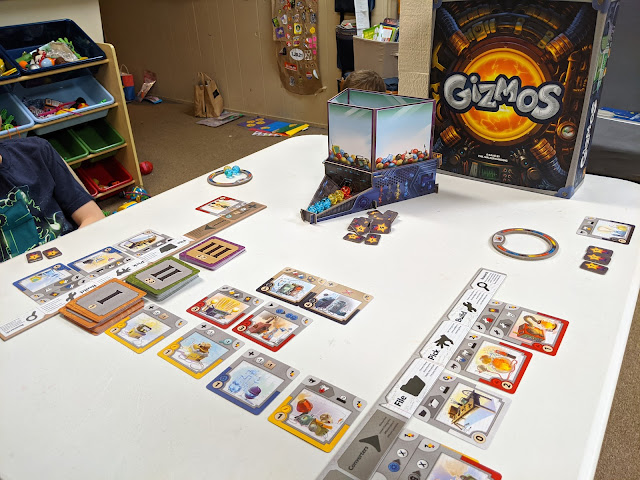 In Gizmos, you and up to three friends will take turns building your engine. Engines are comprised of gizmos, and in order to add them to your machine, you need to spend the appropriate number of marbles, which, in this case, represent different types of energy that are conveniently color-coded. 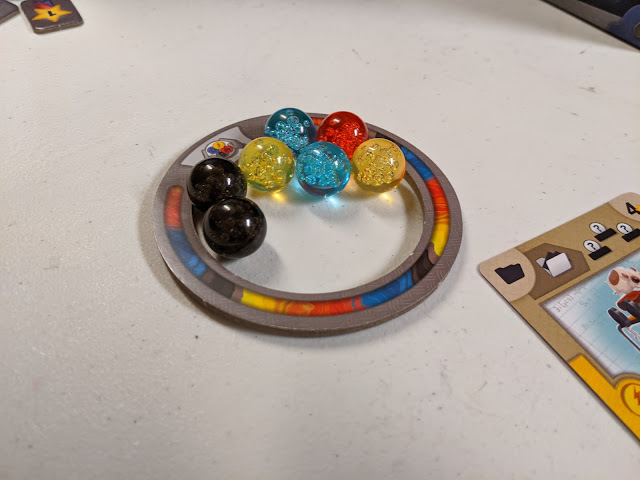 On your turn, you take one action, and then resolve any effects that get triggered by it. The actions you can take are Pick, File, Build, and Research. 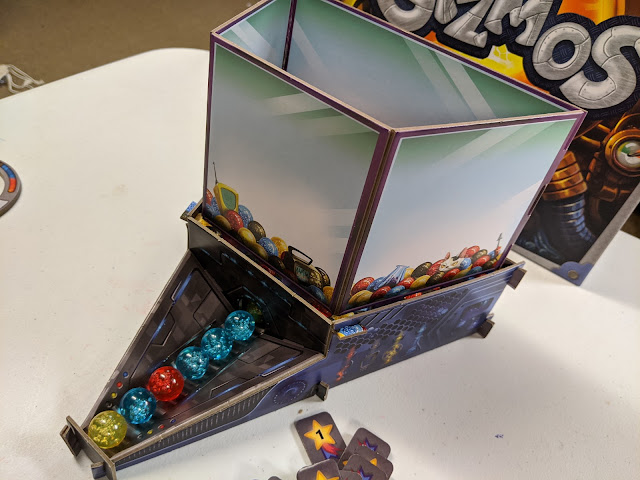 When you Pick, you take a marble off the track, one of the six that are visible. When you File, you take one of the Gizmo cards from the market and set it aside. Now nobody but you can build it. When you Build, you add a Gizmo to your machine--either off the market or from your file--by paying the cost in marbles. For example, the yellow cards on the bottom row below would each cost one yellow marble. The red cards in the second row would cost three, three, or two red marbles, respectively. The final action, Research, is where you look at the top three cards of any stack, Build or File up to one of them, and return the rest to the bottom of their stack. 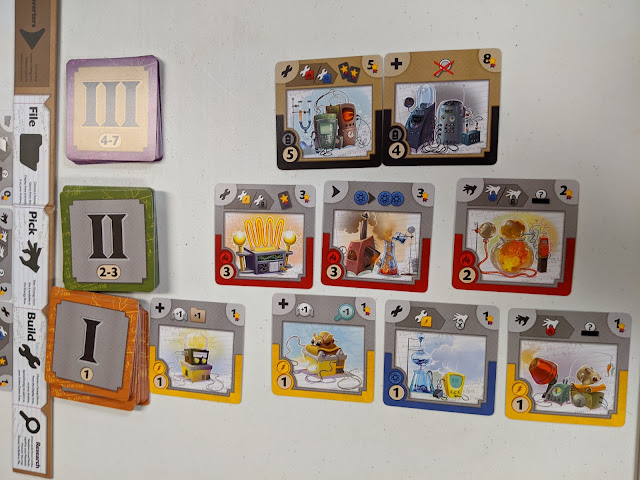 At the start of the game, you have a single Gizmo and strict limits on how many marbles you can hold, how many Gizmos you can file, and how many cards you can draw when you Research. As you add cards to your machine, they make it more complex. Looking at the above market of cards, the two cards on the bottom left both increase your limits. The blue card allows you to take a Pick action whenever you build a yellow Gizmo. The yellow card on the right allows you to draw a marble blindly from the dispenser whenever you Pick a red marble off the track. As you can imagine, these start chaining off of each other. Building a Gizmo allows you to take a Pick, which you then use to Pick a specific color that triggers another action. 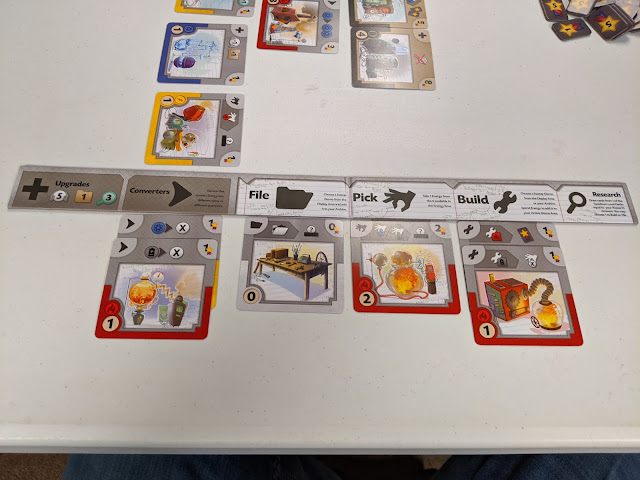 In addition to triggering actions, some cards award you Victory points when you perform a specified action, some act as converters, letting you treat marbles as if they were a different color, and all of them are worth Victory points in their own right. As the game progresses, your machine gets more and more sophisticated, allowing you to do more and more on a single turn and acquire higher-tier cards. Once someone Builds their 16th card or their 4th Tier-III card, the players finish out the round and the game ends. Whoever has the most Victory Points wins. 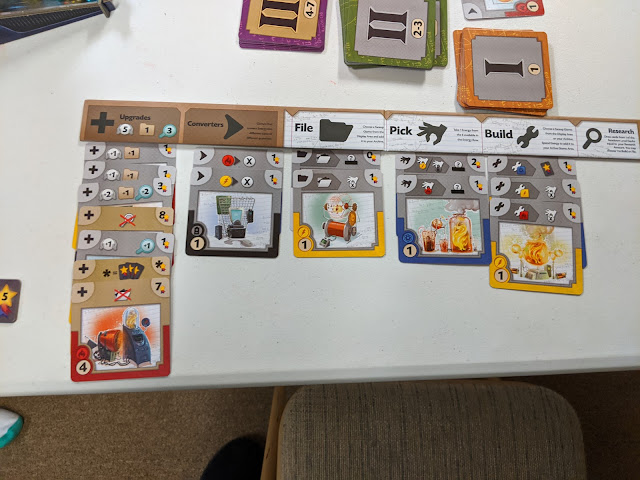 Fun side story: this was the very first game I played at Geekway To The West last summer. I hadn't intended to play it because I already owned a copy, but my friends still hadn't arrived yet and I was looking for something to do and saw these two people trying to figure out what this game was--they had the marble dispenser up on its side. I took pity on them and taught it to them. Anyway.
Let's start with the ridiculously charming aesthetic, shall we? The iconography is clear and understandable. The pieces are nice and meaty. I love the little ring you use to hold your marbles. And artwork is just littered with hilarious bits of absurdity, from a grumpy cat hidden in the marble dispenser to my favorite card in the game, a disc drive being incongruously powered by a Bunsen burner. 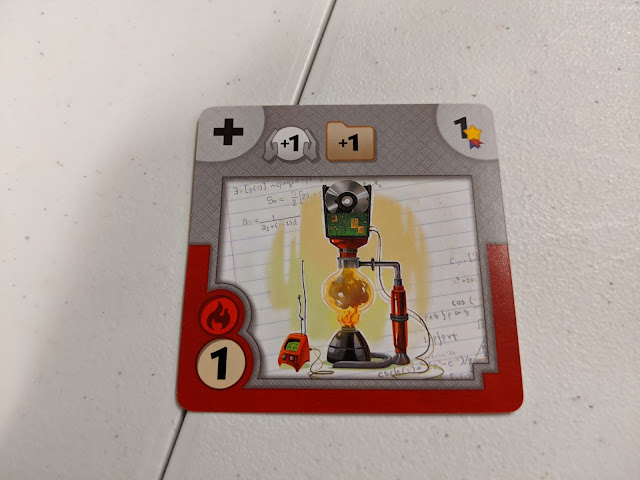 It's a very approachable game as well. While there are lots of different things you can do on your turn, you start the game with a single Gizmo that lets you draw a marble blindly for Filing a card. That means that your first two turns are mapped out for you. First you will File a card and get a marble. On your second turn you will use the marble you drew to Build the card you Filed--if you can--or Build something else from the market. Or, failing that, you at least know what color you need to Pick in order to Build on your subsequent turn. It makes it a very easy game to teach. Which is not to say that there isn't depth. You quickly learn that if you waste a turn early on or don't get your Gizmo-synergy working, you really can't recover from that. It's still a very fun game, even if you lose, though, as a big part of the joy is figuring out how big of a chain you can put together.
They also nailed the complexity curve with this game. My biggest complaint about engine-builders is that it feels like the game ends right as you're finally getting your engine together. But with Gizmos, your engine is never incomplete. It just gets progressively more complex. And right around the time that it starts to get too much to keep track of, the game is over. It makes for a game that feels very fast-paced but still plays in about forty-five minutes.

My biggest complaint has got to be the marble dispenser. Invariably, something gets knocked off the track and you're trying to get it reset so you can push it back in and something falls out the bottom. Every single game, I swear, you pick up the dispenser to see how many marbles are rolling around free underneath (usually 1, occasionally 2, rarely none). And while I love the card art and the form factor, the square cards are a pain in the butt to shuffle.

Nope, but they recently put out a second edition with more robust parts.

This is another great one to play with family. I played this with my 8-year-old so I could take pictures--and he cleaned my clock. It reminds me a lot of Splendor in some ways, and I've never not had a blast playing it.

Tune in next week when we dig up some old fossils with The Great Dinosaur Rush...
In Acquire-To-Zendo, Kurt is going through his favorite board games in alphabetical order. Read the explainer or see more posts.