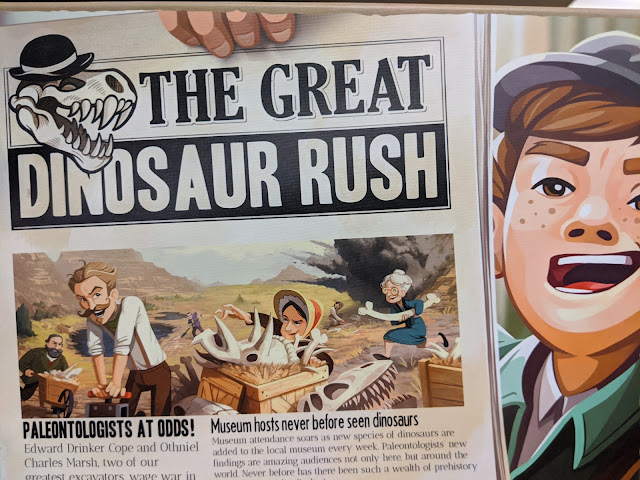 2016, 2-5 players
Complexity: moderate
The Great Dinosaur Rush, or The Bone Wars, was a real event from history, lasting from 1877 to 1892. It was a period of ruthless competition in fossil hunting between rival paleontologists Othniel Charles Marsh and Edward Drinker Cope. The two men spent over a decade and their entire fortunes trying to achieve paleontological supremacy. They also had epic hipster facial hair. The two men were socially and financially ruined by the pursuit, but hopefully things were turn out better for you in The Great Dinosaur Rush. 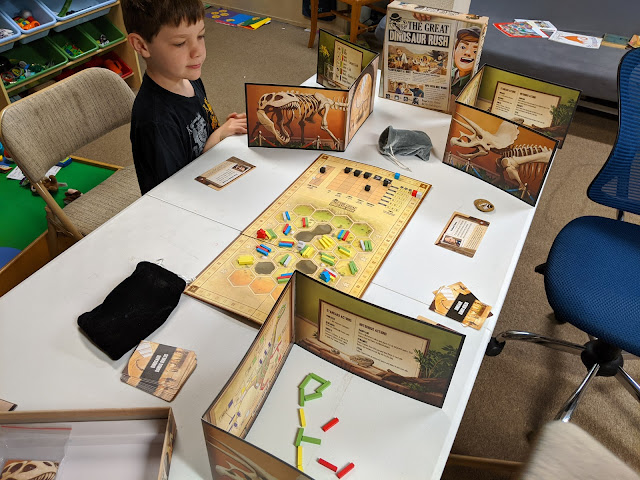 In The Great Dinosaur Rush, you and up to four friends will compete to build the most spectacular dinosaurs using bones you collect from dig sites. You start the game with a privacy screen, two Research cards, and the seven bones that are minimally required to build a complete dinosaur. Each player also gets a Paleontologist identity card. These are based on real people, and grant you a unique trait for the game. 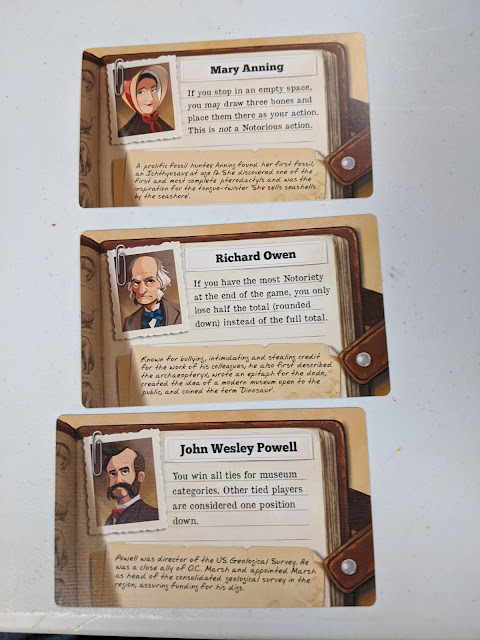 The game takes place over a series of phases: three rounds of digging followed by a Build and finally an Exhibition phase. After three of these iterations, the game ends. 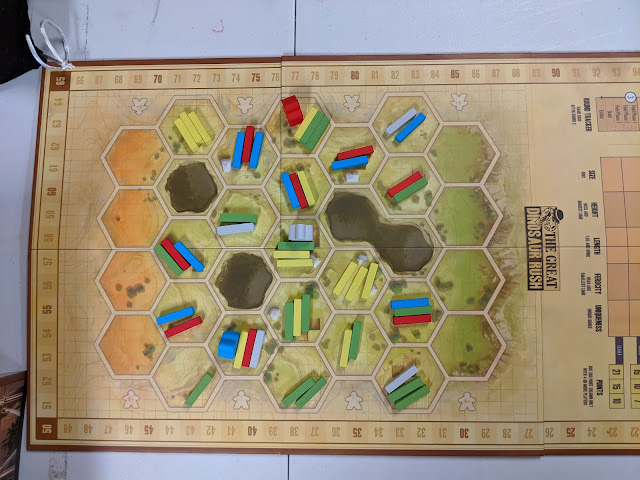 During the Dig phase, players will take turns moving their meeples around the board. First you collect any bones from the dig site where your meeple is currently. Then you move to a new location, traveling as far as you want so long as you only go in a straight line, don't try to go through a tar pit, and don't stop on a hex that's occupied by another player. Next, you publicize, but moving the publicity marker either up or down one box on any of the five publicity tracks. 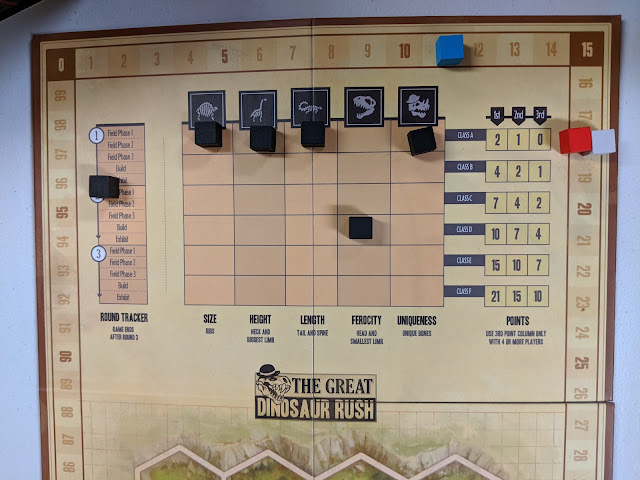 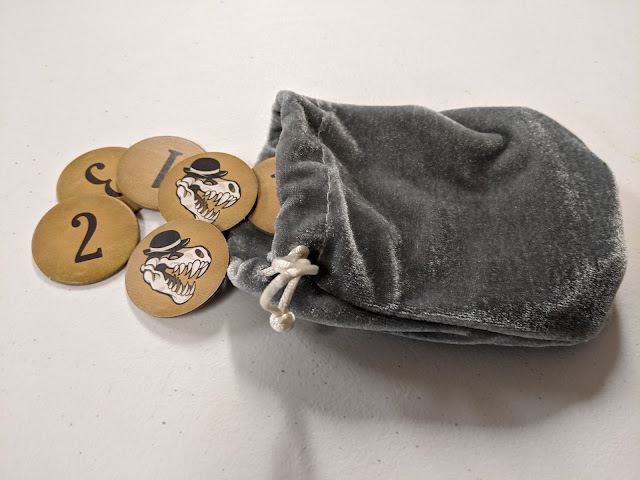 At the end of each turn, you also get to take an action. You can publicize a second time, you can research new dinosaur types (read: draw a Research card), or you can donate bones in order to reduce your notoriety. Alternately, you can take a Notorious action that increases your notoriety. You can sabotage dig sites, steal bones from adjacent sites, or dynamite the site you're presently in to clear the bones that are there and collect three new ones from the bone bag. If you take one of these actions, however, you have to draw a Notoriety token at random, which will net you either one, two, or three Notoriety points. 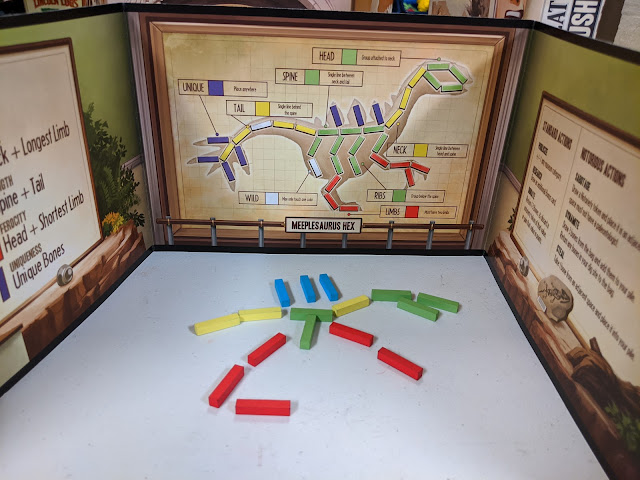 After three Dig phases we move on the Build phase, in which you take the bones you've collected and assemble the dinosaur of your dreams, provided you follow the rules. There are three main colors of bones, and in order to count as a dinosaur, your Meeplesaurus Hex has to have all of the requisite features in the appropriate colors: a spine with at least one rib (green), a tail (yellow), a head (green), a neck (yellow), and exactly two limbs (red). The features can be as long or as short as you like in order to maximize your score based on the Publicity tracks. In addition to the three main colors, there are white bones which are wild and blue "unique" bones that don't count towards the other categories feature but can be put anywhere. Points are then awarded by Publicity category to the players with the most bones in those categories, with smaller point prizes going to the players with the second and third most. 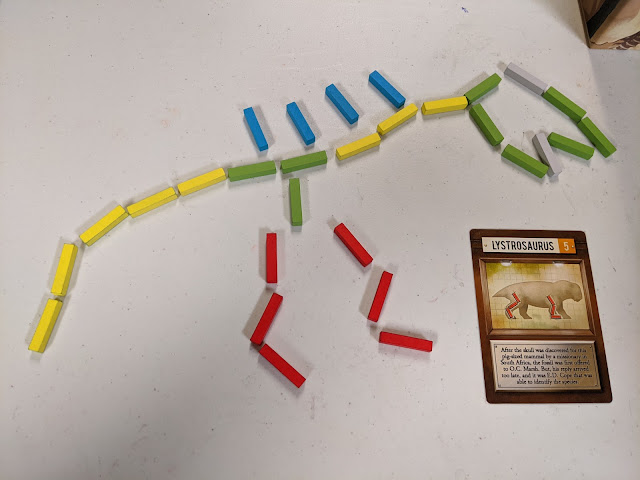 You also score your Research cards. If your Meeplesaurus has the exact features pictured on one of your Research cards, you get that many points. At the end of the Exhibition phase, the dig sites are repopulated, the publicity tracks all drop slightly, and the game continues, meaning that over the course of the game your dinosaur is going to get bigger... 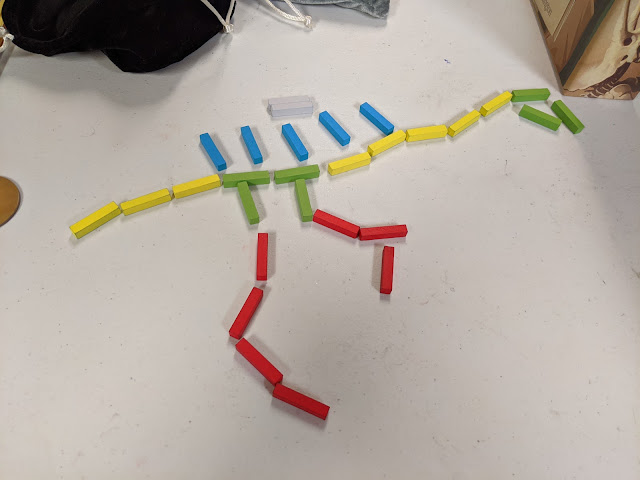 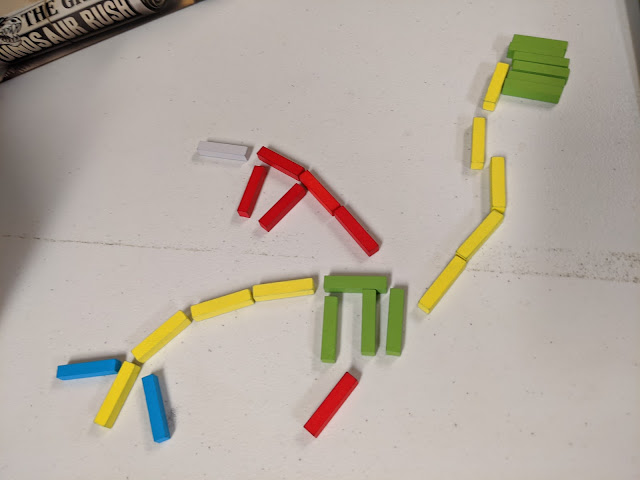 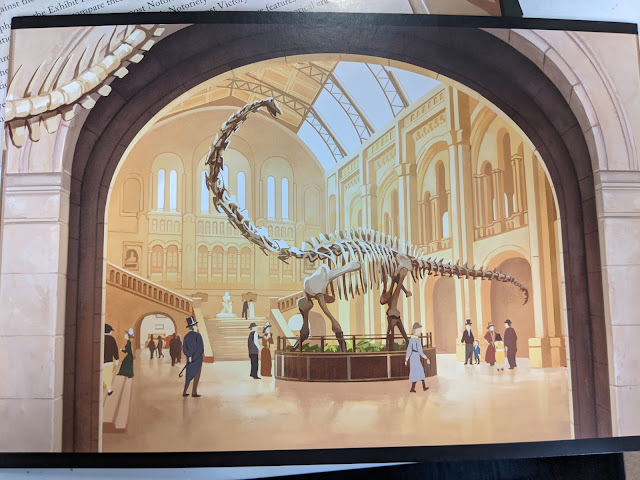 This is one of those "games are also toys" where the entire game concept is an excuse to let you, in this case, build crazy dinosaurs out of wooden blocks. And, indeed, the Build phase is the star of the show here. Most of the stealing and dynamiting you do will be in an attempt to get more bones to play with--not because you're chasing any specific features.
I also like that the theme of the game is drawn from a real life historical event that many people have either forgotten or just plain never knew about. Paleontology is thought of as a noble, if rugged, science, but back in the day it was a reckless, cutthroat pursuit.
I also like that--in the spirit of this being a game about building dinosaurs with blocks--there are alternate simplified rules included that you can use for playing with children.

The scoring is a wee bit janky. Conceptually, I like the idea that "notoriety" is to your benefit as long as you aren't the most notorious. In practice, it makes it very difficult to strategize. The number of Notoriety tokens that everyone has is public knowledge, but the values are hidden, so you really can't have much of a gauge of where you stand in Notoriety until the very end. And since that can drastically shift the standings, it means that the ultimate winner is usually something of a surprise.
Publicity, too, is a hard thing to wrap your brain around. Especially since you start the game off the board, so the first part of your first turn--collecting bones--is skipped. You take your first Publicity action before you have anything beyond your starting bones. And that's a little weird.
And while I mostly like the components, there's a turn track that's entirely too small. The boxes for it are about half the size of the cube you use to mark it.
My final complaint is a very minor one: that it doesn't scale down very cleanly. It's best with four or five. It plays well with three, but requires an alternate setup. Two-player games require not just an alternate setup but different rules for handling Notoriety.
All of these things make this game feel very much like what it is: a Kickstarter game. The ideas are very cool and the execution is about 80% there, but you have to think that if it had been traditionally published, some of those elements would have gotten smoothed out. This is not me damning it with faint praise, though. I enjoy the game immensely, despite its rough edges.

Not to my knowledge, but that's fine. It feels complete.

While it takes a turn or to to get into the flow of the game--which is not nothing in a game where you literally only take nine turns--the dinosaur building is very compelling and makes for a really fun experience. Every single time I've played, at least one person has whipped out their phone to document their creation.

Tune in next week when the kaiju duke it out to determine which one will become King Of Tokyo...
In Acquire-To-Zendo, Kurt is going through his favorite board games in alphabetical order. Read the explainer or see more posts.