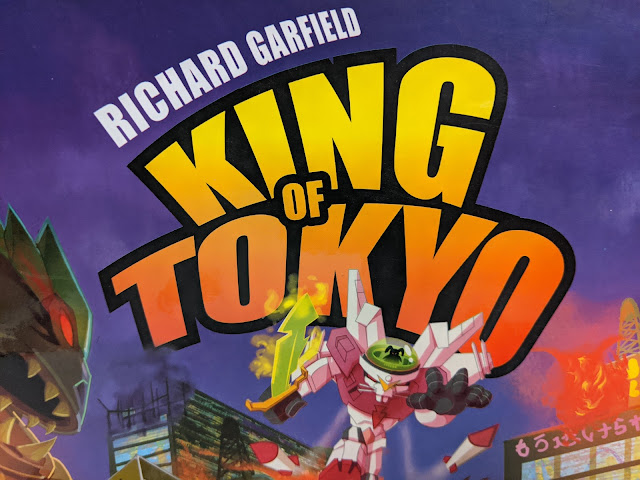 2011, 2-6 players
Complexity: light/moderate
Terrible monsters rise from the sea. A fearsome robot dragon descends from the mountain. A horrid alien creature lands from outer space. For some reason, there's a bunny piloting a mech. The creatures fight for domination, laying waste to the city of Tokyo as they duke it out. Many will battle, but only one can become the king. 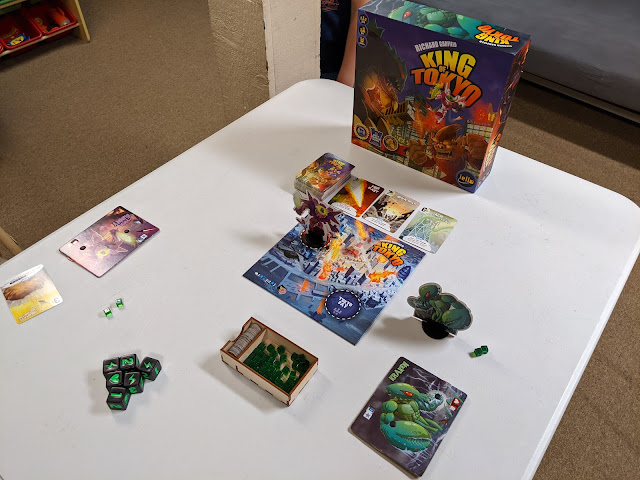 In King Of Tokyo, you and up to five friends battle for control of Tokyo using the cunning skill of dice-rolling. On your turn you will roll all six dice. After the first roll, you set aside the faces you want to keep and then roll again. You do the same after the second roll. After your third roll, you resolve whatever is on the dice. 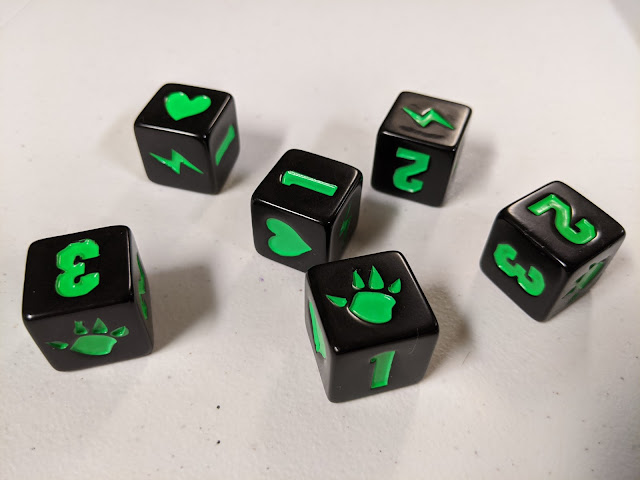 There are four different resources you can acquire during a turn. Hearts give you health. Claws give you attacks against other monsters. Numbers give you victory points, but only if you have at least three of the same number. Lightning bolts give you energy that you can use to buy cards, which can give you either a one-time or permanent bonus. These can make it easier for you to do damage, give you a boost in energy or stars, or give you new abilities like an extra die roll or spending energy to gain health. 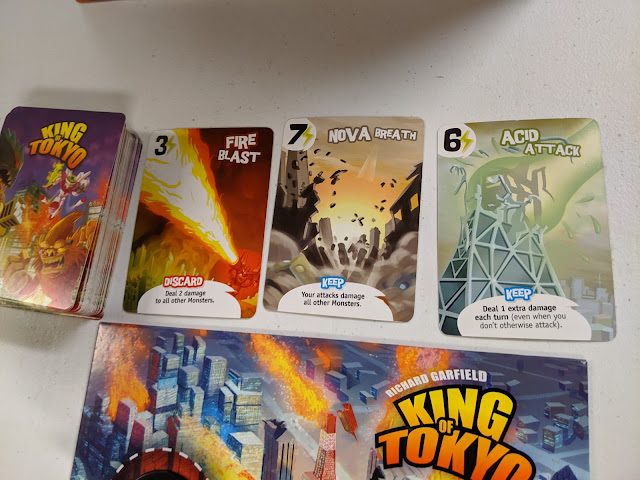 The centerpiece of the game is the king-of-the-hill mechanic around control of Tokyo. At any give point, there can only be one monster in Tokyo (or two, in a five-to-six player game--before the fifth and sixth players have been eliminated). When a monster in Tokyo attacks, it does damage to all monsters outside of Tokyo. But when a monster outside of Tokyo attacks, it can only hit the monsters that are in Tokyo. 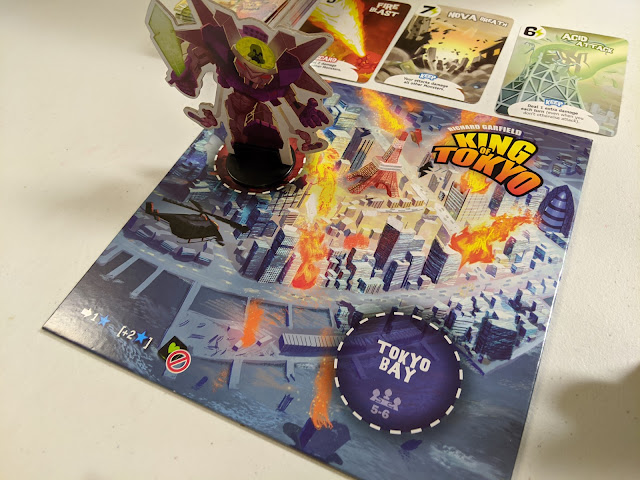 Being in Tokyo is great! You get a star for entering and two stars if you start your turn already there. But! While you're in Tokyo, you can't heal, and you only have ten health to start. Any hearts you roll while in Tokyo just don't count. This means that while you're there, the other players will be gunning for you. 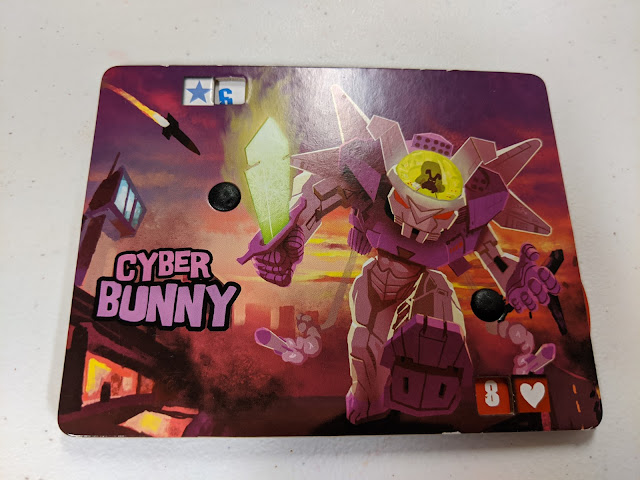 When you take damage, you have the option to flee, and when you do, whichever monster hit you enters Tokyo and becomes the new focal point of the action. If you run out of health, you're eliminated from the game. Whichever monster gets to twenty stars first win. 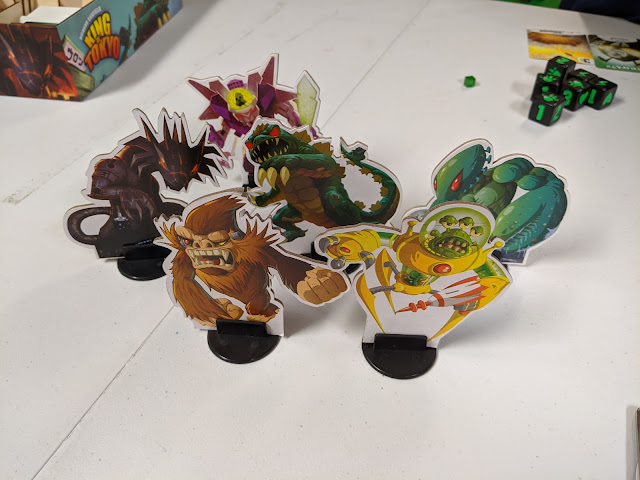 King Of Tokyo is best described as a press-your-luck dice game, which is both true and misleading. While there is a strong press-your-luck element to the game, it's not like Zombie Dice or Craps where you let it ride until you choose to stop because a certain dice combination will end your turn and make you forfeit your winnings. Instead, King Of Tokyo gives you a fixed number of die rolls to try to make the best hand you can. This means you need to be adjusting your strategy on the fly to whatever the dice give you. If you want hearts but your first roll gives you energy, sure, you can just re-roll everything, but maybe you need to see if there's a better play going after cards.
Fortunately, there are many paths to victory. You can focus on keeping control of Tokyo. You can sit quietly on the sidelines acquiring victory points by rolling numbers and hope no one notices you. You can just try to gain energy and get powerful cards. Or you can go super-aggressive and try to knock other players out of the game.
Also, there's the king-of-the-hill mechanic around control of Tokyo, and that's where a big part of the press-your-luck comes into play. Once you're down to six or fewer health points, it's conceivable that someone could knock you out of the game on a single turn. So if someone is attacking you, you need to balance your options. Is it worth it to stay in the city and get the two-star bonus on your next turn? Or would it be better to cede the points and heal up on your next turn so you can come back swinging later.
The fact that there's always someone in Tokyo gives the game a ticking-clock. Victory points are constantly being assigned. It makes for a fast game with a lot of tension. But the tension is balanced out with a goofy aesthetic and art that draws heavily from the kaiju films that inspired the game. I'm also a big fan of the big, chunky dice. There's a great tactile element to them.

There are a few cards that feel awfully unbalanced. Extra Head gives you a bonus die that you can use for the rest of the game. Shrink Ray lets you steal dice from other players. These are expensive cards, but if someone manages to get their hands on them, they've pretty much won.
And I'm never a fan of elimination games. There's nothing less fun than a risky gambit that gets you booted early and you spend the rest of the game watching other people play.

There are a number of expansions and promos for the first run of this game. I've got both the Power Up and Halloween expansions which add new monsters and cards. Power Up added the most durable mechanic, giving monsters individual decks of cards that they could draw from if they roll three hearts. There's a second edition of the game with different monsters that has added a slew of its own standalone monsters, and I'll be honest that I just haven't kept up with it. Recently, they put out a "Dark" edition with less childish art and some slightly altered mechanics.
In general, I like adding new monsters, but these expansions and new versions add more complexity without really making gameplay any better. It's already a very busy game. It doesn't need more stuff to be keeping track of. There's also a sequel, King Of New York that adds a whole lot of complexity and makes the game almost unplayable.

This is another great gateway game. It's easy to pick up, offers a lot of variety, plays quickly, and engages players rapidly. There's not a ton of depth to it, but there's enough to keep track of that even a seasoned gamer isn't going to get bored.

Tune in next week when we parcel out land in Kingdomino...
In Acquire-To-Zendo, Kurt is going through his favorite board games in alphabetical order. Read the explainer or see more posts.