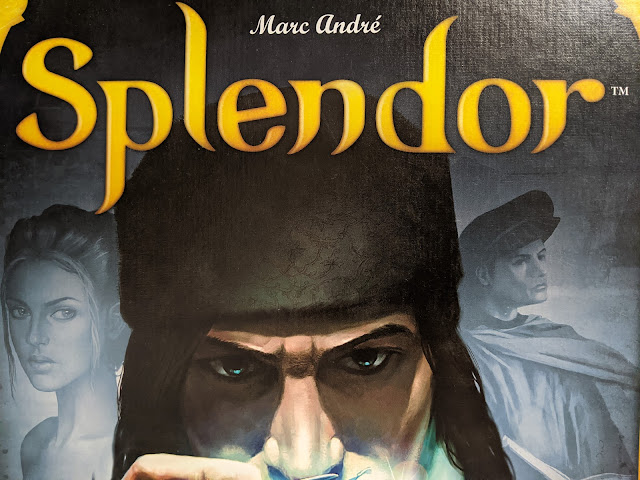 2014, 2-4 players
Complexity: light
Set in the Italian Renaissance, Splendor is game about collecting gems, acquiring mining and transportation rights, and building a jewelry supply chain. But mostly it's a eurogame about buying cards and building a tableau. 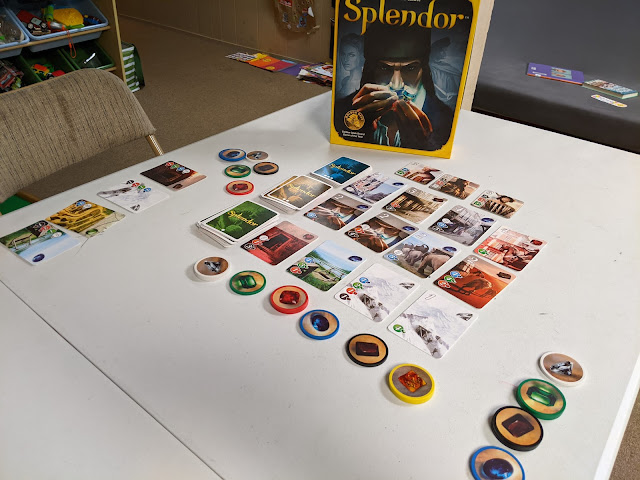 In Splendor, you and up to three friends will take on the role of gem merchants, dealing in gems that are red, black, white, green, or blue. On your turn, you can either take gems from the supply or spend your gems to acquire cards. 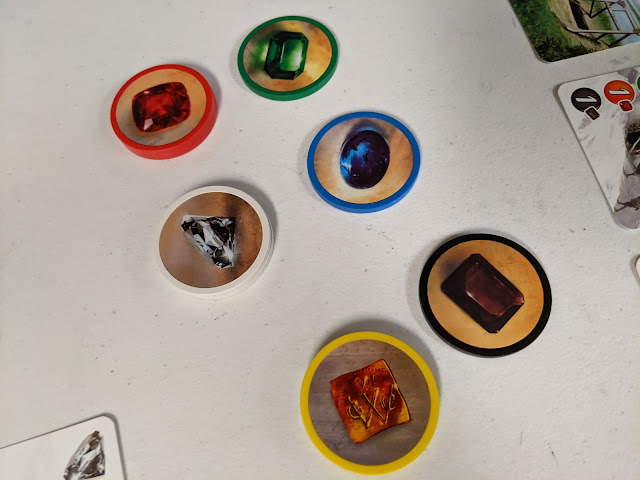 The supply of gems is determined by the number of players. If you're taking gems, you have two options: you can take three gems of three different colors, or you can take two of the same color--but only if there are at least four of that color in the supply. If you end up with more than ten, you have to discard down at the end of your turn. In addition to the five gem types, there is gold which acts as a wild, but it can only be taken when you reserve a card--that is, taking a card from the market and setting it to the side where only you can purchase it. 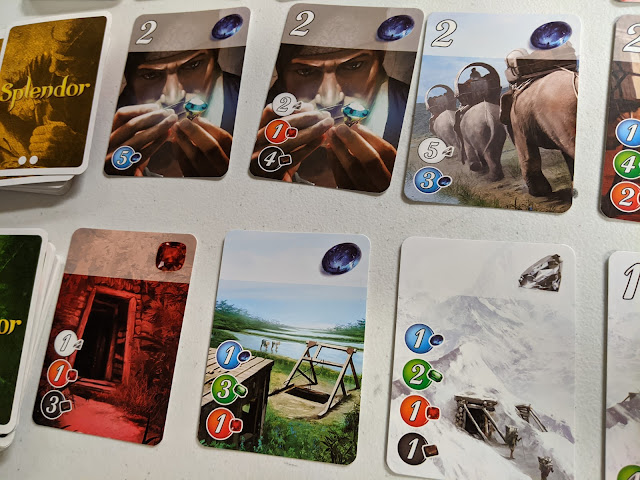 If you want to purchase a card, either from the market or from your reserve, you simply pay the cost in gems, returning them from your personal play area back to the general supply. Every card you purchase is added to your tableau and has a gem printed on the top of it. Some also have victory points. 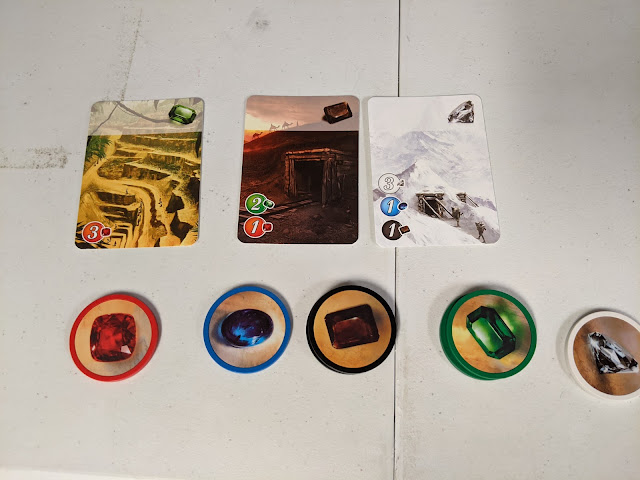 Cards in your tableau may also be used to purchase cards, but they don't leave your play area, meaning they effectively lower the cost of other cards. For example, in the above picture, the player has cards giving them green, black, and white gems. If that player wanted to purchase a card that costs one white, one red, and three black (as seen in the picture above that), they would only have to spend one red and two black, because they have cards providing them with a white and a black already. As your tableau grows, you are able to buy more and more expensive cards, which have increasing amounts of victory points on them. 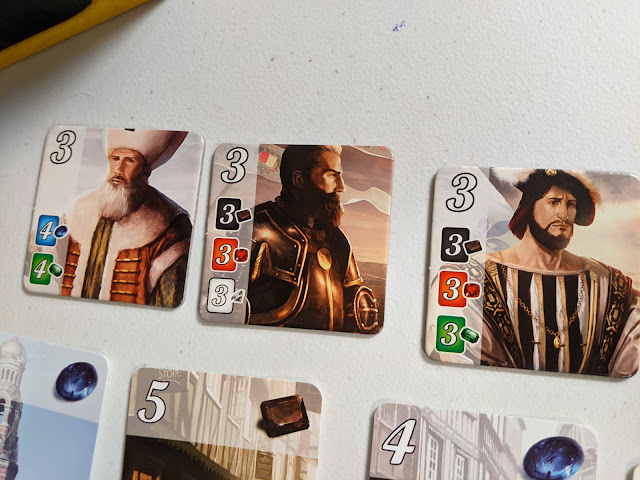 The other source of victory points are the nobles, who will come and visit you (bestowing their points) if you have cards in your tableau matching the condition on their token. For example, the noble on the left above will visit if and only if your tableau contains at least four blue and four green cards. 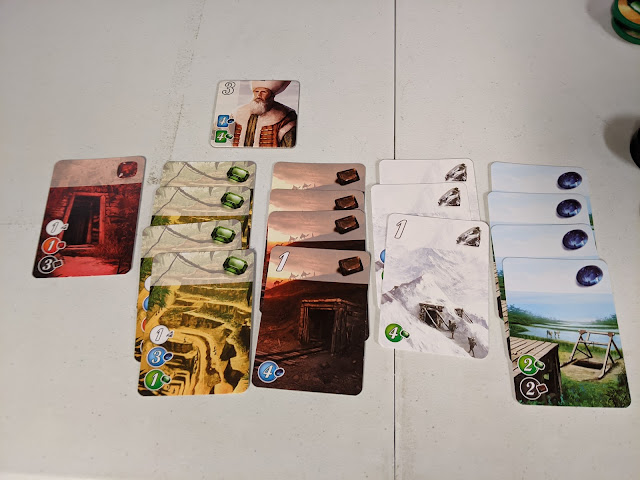 Play continues until one player has amassed fifteen victory points, at which point the round finishes out and whoever has the most points is the winner. 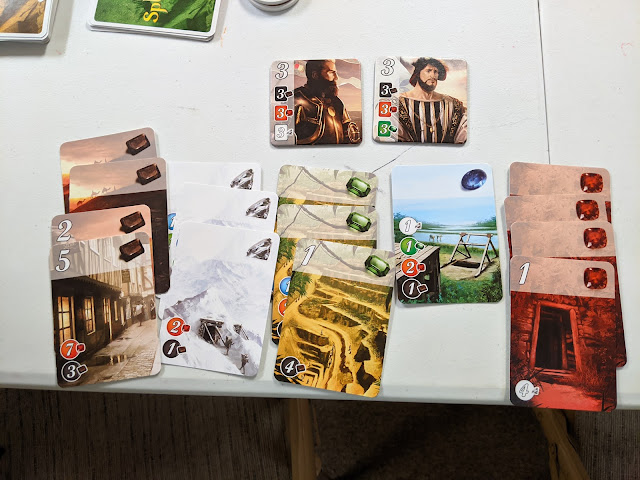 Splendor is a simple game that plays very quickly. I played it with my six-year-old and he only needed minimal coaching (and he cleaned my clock, for whatever that's worth). The mechanics are straightforward and the very stripped-down. In the tradition of the classic eurogame, you can learn everything you need to know about it in a few minutes, but then spend many playthroughs optimizing your strategy.
Indeed, the real joy of this game is in figuring out how to ramp up your engine, as in a game like Dominion. There's not a ton of player interaction--you're mostly just racing towards the victory condition. Honestly, it reminds me most of Mario Kart, where you can play time trials over and over again searching for the best way to shave a few seconds your time. It can be quite addictive.

There's not a lot of variety or player interaction--whether that's a feature or a bug is going to be at the discretion of the player.

There is a collection of expansion content called Cities Of Splendor that contains four different gameplay variations--and from what I understand they are not intended to be mixed. I have not personally played them, but I hear they're quite good. There's a Marvel reskin of the game that players going after Infinity Gems because of course there is.
There's also a digital edition with a pretty good AI, if you just want to play it over and over again and really hone your ramp.

Splendor is a quick, easy-to-learn tableau/engine builder that balances stripped down mechanics against a healthy amount of strategic depth.
Tune in next week when we embrace party-game chaos in space with Star Fluxx...
In Acquire-To-Zendo, Kurt is going through his favorite board games in alphabetical order. Read the explainer or see more posts.

Kathy Schrenk said…
This is pretty much my current favorite game. Unfortunately I found that the expansions added nothing. We played each once and the box has sat unopened ever since.
October 1, 2020 at 8:20 AM