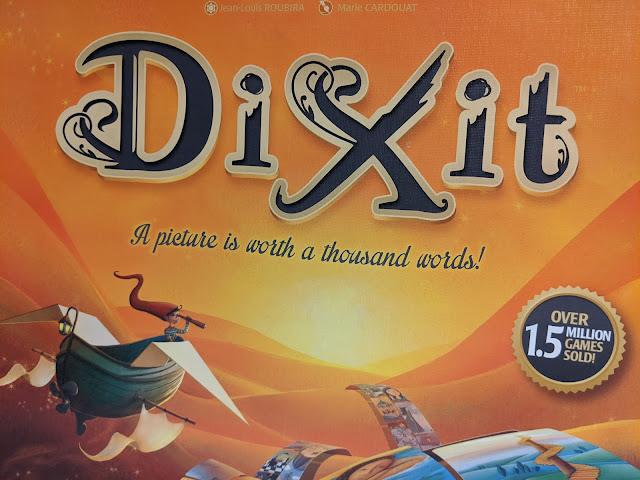 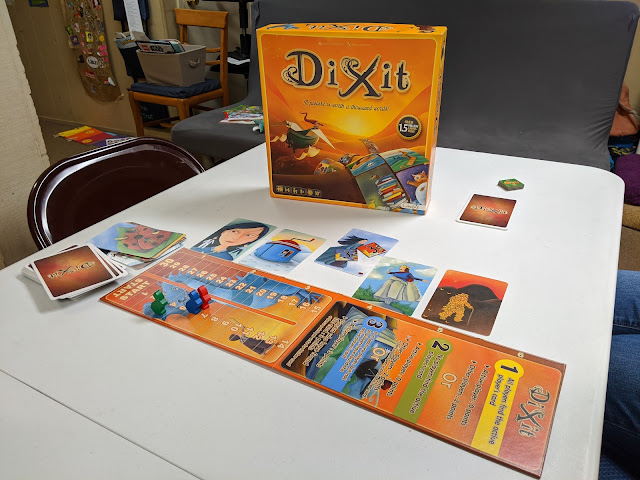 In Dixit, you and two to five friends (who are all rabbits for some reason) will alternate in the role of Storyteller, describing a picture that the other players will have to guess. Each player has a set of voting tokens that varies depending on the number of players. You draw a hand of six cards. The Storyteller then chooses one of their cards and describes it. It could be a word, a phrase, a song, a guttural noise. The rules are pretty flexible. 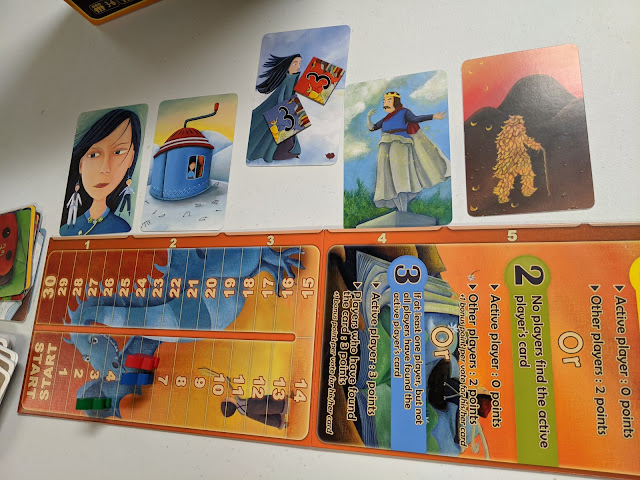 Each player picks a card from their hand that they feel best matches the clue. The cards are shuffled and laid out above the board. For example, in the above image, the clue might have been something like "Woe is me." Once the cards are laid out, each player then uses their numbered tokens to vote on which card they believe is the real one that was selected by the Storyteller. The guesses are revealed and the players score accordingly. 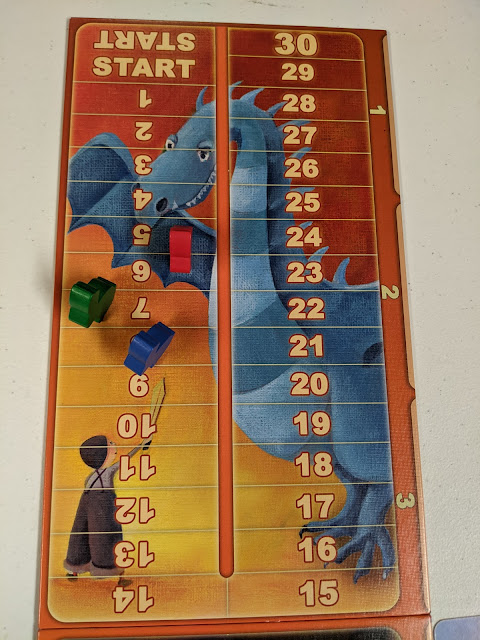 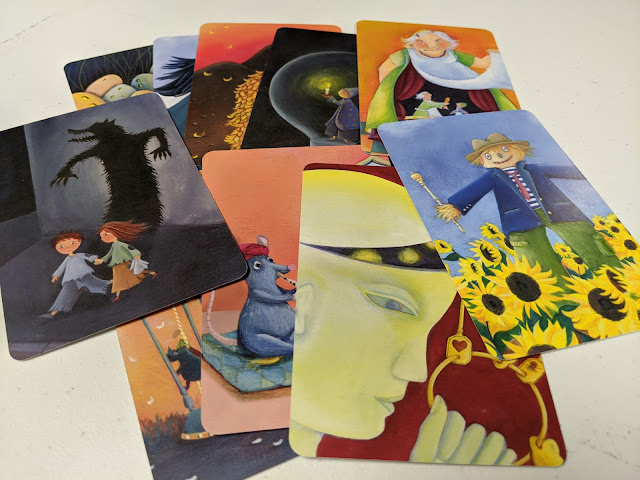 The nice thing about party games is that they're easy to learn, easy to teach, play quickly, and involve a decent amount of player interaction. One of the nice offshoots of that--for this game in particular--is that the level of difficulty scales pretty cleanly with the experience level of the players. Since you're trying to be not-too-vague but also not-too-obvious, you have to change the way you play if you're playing against children and family as opposed to a bunch of casual gaming friends as opposed to a troupe of hardcore gaming enthusiasts.

There's no downtime, to speak of--everyone has something to do each turn. The art is pretty amazing... with some caveats that I'll get to in a minute. There's a level of whimsy built into the aesthetic that's pretty dang appealing. You play as rabbits for Pete's sake.

The art in the base game is not great--don't get me wrong, it looks amazing, but from a gameplay perspective it's only so-so. This is clearly something they've iterated on in the years since it came out. Future expansions with new art packs have slightly more complex art that gives you more to work with in terms of connecting pictures to topics.

Also, while it's technically playable with three or four, it's much better with five or six, which can make it a little harder to bring to the table. Meanwhile, it's not uncommon in a five or six player game for someone to take an early lead and then everyone else is just waiting for the game to end. If someone is at twenty points and everyone else is at ten, the winner is pretty much determined even though there's still several rounds left to play. Fortunately it's a relatively short game, so this isn't too cumbersome, but it can make the game less fun for inexperienced players.

Finally, this is a party game, so you can have a very uneven experience depending on the company you play it with.

Why, yes! It's more of a game engine than anything else, and there are a number of expansions that don't modify gameplay at all but just add new art packs that can either be mixed in with the originals or played on their own. Make sure that you really want to mix them together before you commit to it, though, because there's not an easy way to separate them again.

Our favorite expansion is Memories, but in addition to that there's Odyssey, Journey, Daydreams, Revelations, Origins, Mirrors, Quest, Harmonies, and Anniversary. Things get a little confusing, since there is a version of Journey that provides a game board and tokens and Odyssey is kind of a standalone but not. There's also a 10th Anniversary that may or may not be different from Anniversary. There are also dozens of stand-alone promo cards and promo card packs. Just... don't try to be a completionist on this one, it will only drive you nuts.

I have a lot of affection for this game. It scratches a creative itch that you don't normally get to satisfy in tabletop games, and it's squishy enough that I can play it with my kids and everyone has a good time.

Tune in next week when we consolidate power and territory in Dominion...
In Acquire-To-Zendo, Kurt is going through his favorite board games in alphabetical order. Read the explainer or see more posts.

Natalka said…
We love this game in my family! But it is really hard to play with three people, because you have a 50% chance of just guessing which is the storyteller's card. To make it a bit more fun, we made up "Random Bunny": a fictitious 4th player who kicks in the top card of the deck each time. The cards are vague enough that "Random Bunny" has come up with some surprisingly apt "choices".

A real challenge in playing with 2 adults and 1 kid is not falling into a pattern of making allusions that the other adult gets but the kid won't get. Our kid is six, so any reference to adult pop culture will shoot over his head like a falling star.
May 13, 2020 at 10:35 AM