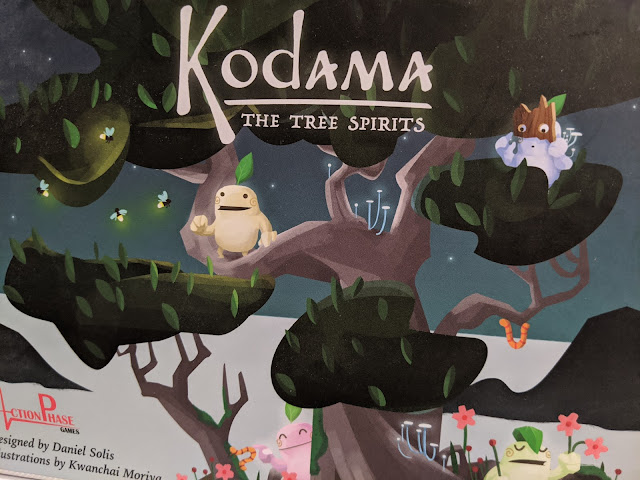 2016, 2-5 players
Complexity: light
Kodama are spirits from Japanese folklore, said to inhabit trees that are older than a hundred years. The most famous depiction is probably in Studio Ghibli's film Princess Mononoke, in which they are seen as tiny, ghostly humanoid creatures with round black eyes and mouths and heads that rattle. Supposedly, if you cut down a tree where a kodama lives, you invite a curse upon yourself. In the game Kodama: The Tree Spirits, you are cultivating a tree to attract kodama and make them happy, so that you might be remembered for generations. 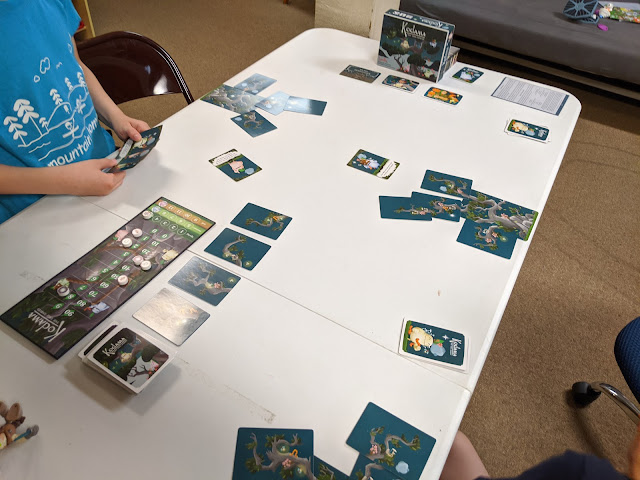 In Kodama: The Tree Spirits, you and up to four friends take on the role of kodama caretakers. You each start with a trunk card that has the beginning of a tree and one of six features: a cloud, a mushroom, flowers, a star, a firefly, or an inchworm. Each player also gets four kodama cards that will grant them points. The game is played over three seasons, Spring, Summer, and Fall, each consisting of four rounds. 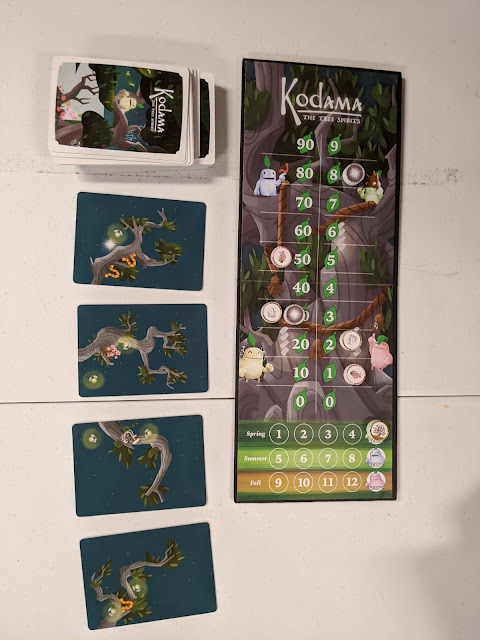 On your turn, you take a branch card from the display and add it to your tree, scoring any points that you get. The primary way you score points is by creating lines of continuous features going back towards the trunk. For example, if you have a trunk with a firefly on it and play a branch card that has two fireflies directly on the trunk, then you've created a continuous line of three features and would get three points. Most branches have more than one feature, and you get points for each of those chains, with the caveat that you can never get more than ten points for a single card play. 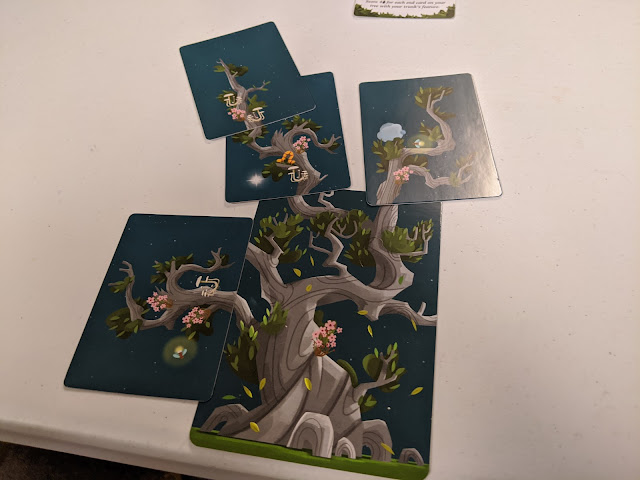 In addition to scoring features, you also score points for the seasonal decrees, which are refreshed at the start of each season, which apply to all players. They may allow you to score extra points on each play or just at the end of the season. 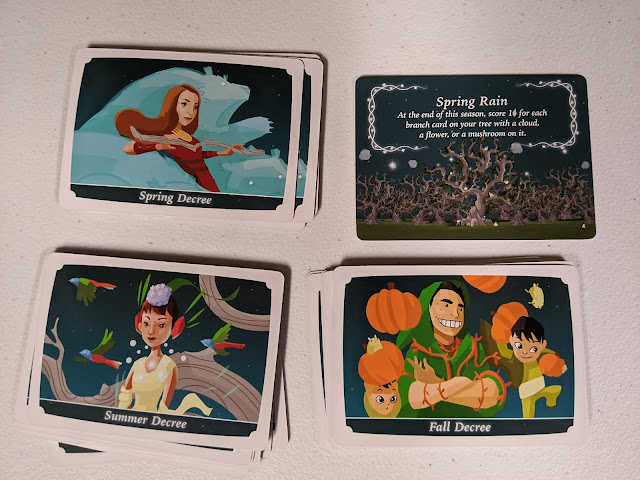 Finally, at the end of each season, you play one of the four Kodama cards from your hand and score whatever points are awarded from it. 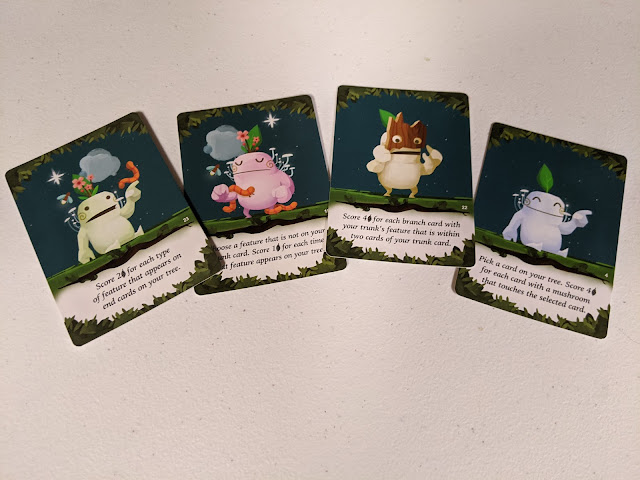 Whoever has the most points at the end of the game wins. 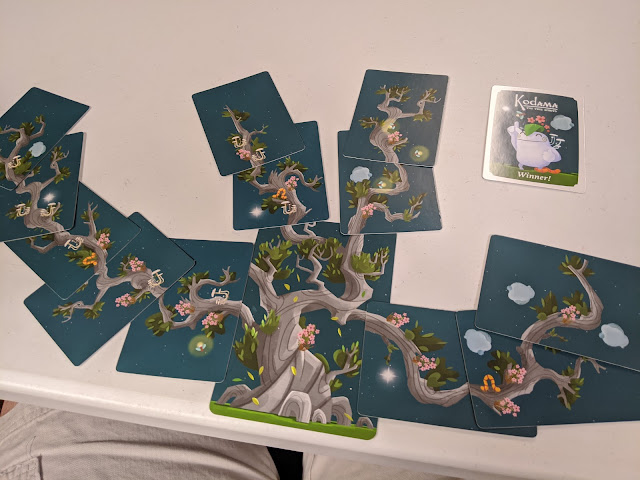 I'm a big fan of small-box games, something you can throw in a bag that takes up little-to-no space. There's a certain elegance to a game that can build a lot of interesting play out of a small footprint, and I especially like the ones that stretch beyond the party-style chaos-or-intrigue mechanics of games like Coup or Fluxx (although those are both great).
This game is not hectic or tense. It's charming--soothing, almost. Which is not to say it's passive or dull, between the seasonal decrees and the kodama cards in your hand, you have a lot to mull over when trying to figure out how to maximize your score from the available branches. You never draw more Kodama cards--those four are what you have to work with. And, in general, they're going to be worth more points later in the game, so you have to plan carefully.
There's also an innocent playfulness to this game that I can't help but find endearing. It comes with little cardboard kodama figures you can use to decorate your tree at the end of the game!

The restrictions on branch placement are pretty straightforward: you can't move a card you've already played, your tree can't grow below the "ground", you can't cover features, and a card can't overlap more than one other card. But in practice, this gets a little fussy, because things inevitably get jostled. And while the cards are designed to branch out, realistically you're going to end up with three or four long branches off the trunk, none of which really branch or fan.
These are minor quibbles, but they are things that have been improved upon in future games in the series.

Not really, apart from Kickstarter Promos, but there have been a number of games in this series that explore different realms of gameplay. Kodama Duo is kind of a two-player redux with some new features that can be added to the base game in order to make it play with six. Kodama 3D is a delightful edition that allows you to build free-standing three-dimensional trees, and there's a forthcoming game called Kodama Forests that will continue the series. The only clunker is Kokoro: Avenue Of The Kodama which is a flip-and-write path-finding game that is decidedly not fun. 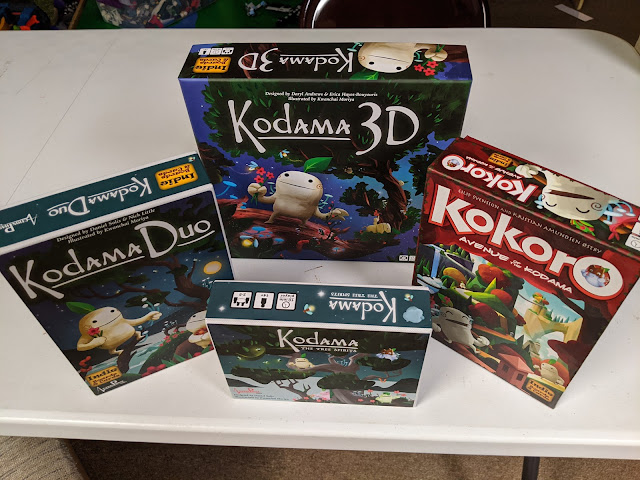 The game oozes relaxed charm and a gameplay mechanic that I've never run across in another game, especially a small-boxer. This one is pretty special to me.

Tune in next week when we capture some totally radical prisms in Lazer Ryderz...
In Acquire-To-Zendo, Kurt is going through his favorite board games in alphabetical order. Read the explainer or see more posts.