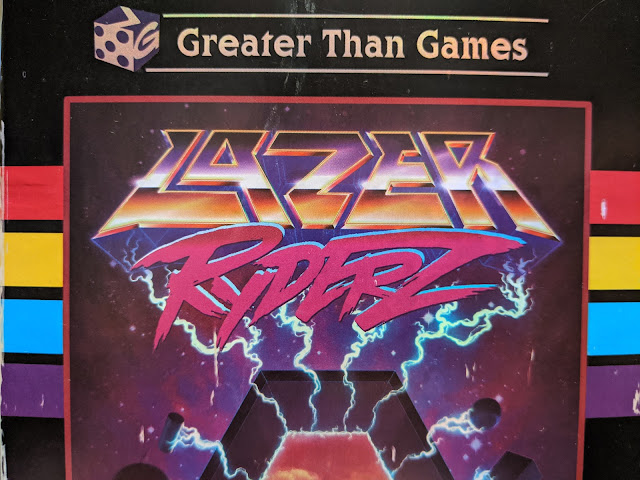 The 80s weren't just a time of synth-heavy pop music, stock market excess, hair metal, and cocaine. They also produced a totally bitchin' glossy pseudo-futurist aesthetic that permeated children's entertainment. Now that the Lisa Frank generation has come of age, that design ethos has been seeing a resurgence. And if you want to have that aesthetic injected directly into your veins, then fire up the old VHS player and put on some Lazer Ryderz. 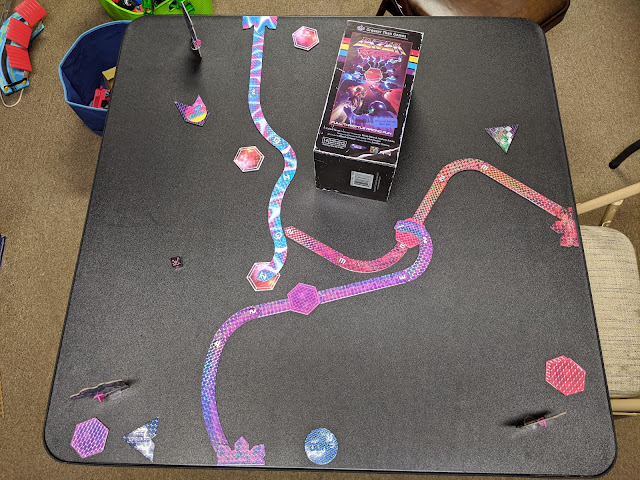 In Lazer Ryderz, you and one to three friends take on the role of iconic laser-riding heroes of old: Lazer Shark, Super Sheriff, Phantom Cosmonaut, and Galactic Waverider. You're racing each other through the cosmos to capture prisms of... awesomeness... or something. And unlike some other board games that use a "board" for gameplay, Lazer Ryderz uses a table. You start on the edge and race towards the middle. 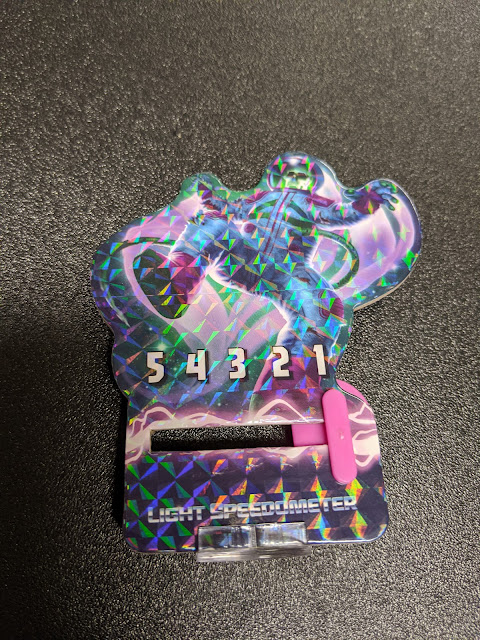 At the start of the game, each player blindly picks a starting position and a starting gear. Each player's character has a vehicle with five gears, but if two people start in the same gear, they both stall out and go back to first. Turn order is determined by which player is in the highest gear and tracked using these very on-brand turn order markers. 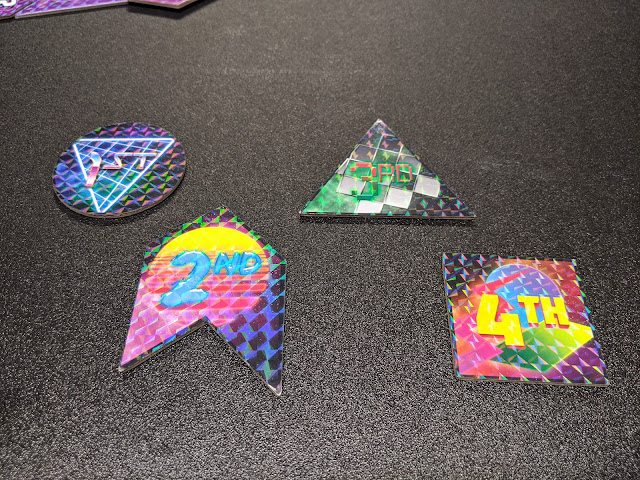 On your turn you can upshift or downshift one gear, and then you move by placing a piece of track on the table, connected to your current position (that is, the end of your most recently played piece of track). If you want to turn, you have to roll a die and match or beat whatever gear you're in. If you fail the die roll, you go straight. If you pass, you can make a turn. The die also has one face that makes you spin out. It's not numbered, but for all intents and purposes, it's the 6. If you roll that one, you still make the turn, but you have to go back down to first gear. 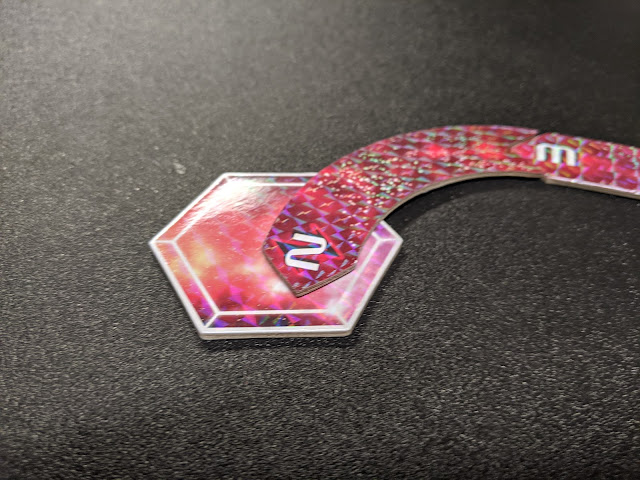 The aim of the game is to capture prisms, which you do by passing your track completely over them--it doesn't have to be through the center, but part of the prism has to be visible on both sides of your track. If it is not, then the prism gets nudged out into the open. If it is, you replace it with a prism of your own color and replace the original by--and I'm not making this up--stepping back, closing your eyes, and throw it onto the table. 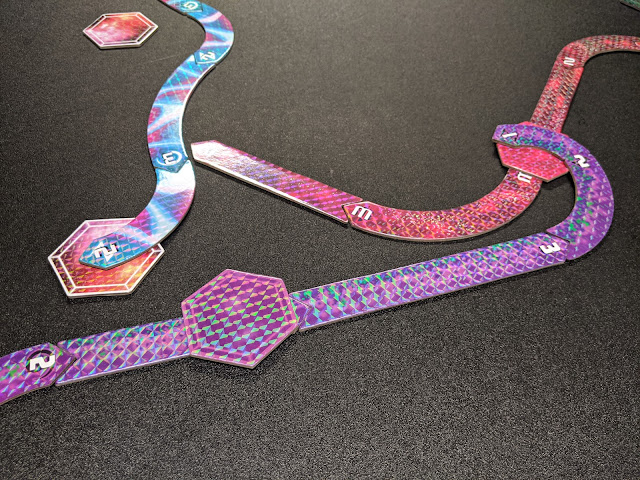 Prisms are the only place where tracks are allowed to cross each other. If you run into someone else's track at any other point--or if you run off the table, you remove your track and pick a new starting point. Conversely, if someone runs into your track, you remove pieces but don't have to start over. 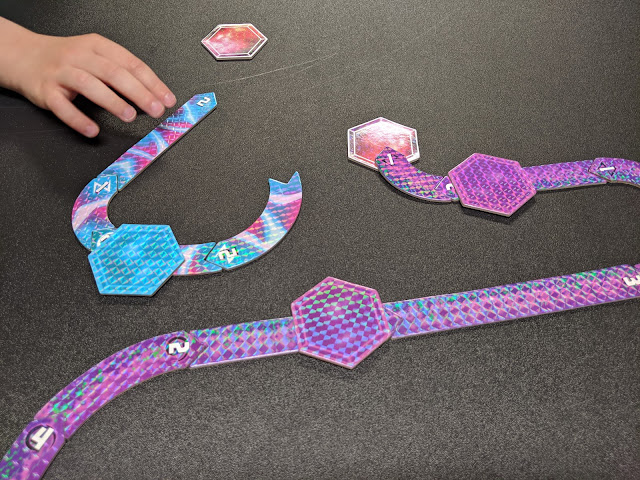 Your prisms are up for grabs if you don't have track going through them, so be careful. Also, if you start to run out of pieces, then your track will start to disappear behind you--although it takes a large enough table for that to be an issue. There are some character-specific rules as well. (We didn't use them in this game, but they're there.) For instance, the Phantom Cosmonaut can pass through someone else's track once. These give you a little more variety, but they're optional.
The game ends once someone has captured their third prism.

It's a very goofy game, but it knows exactly what it is and it's not holding anything back. For starters, the aesthetic is just 100% on point. I love that the game box looks like a collection of VHS tapes, and I especially love the added detail of the worn edges. 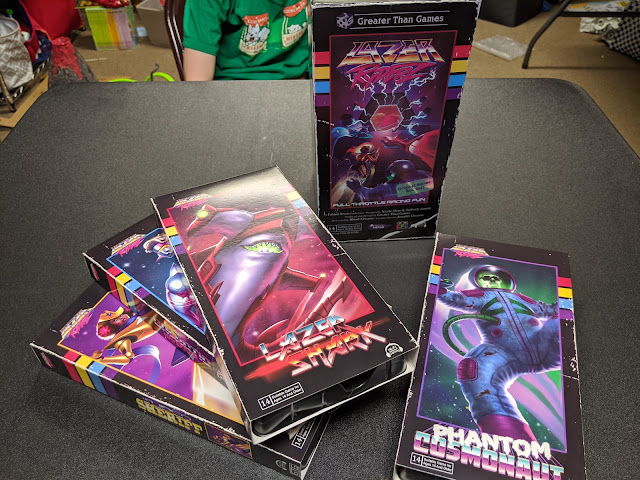 At the end of the day, it's basically just the Light Cycles from Tron, but as a board game. But it plays quickly and there's a fun tactile element to the gameplay that you don't get from a lot of more traditional games.
I like the fact that turn order is determined by gear rather than just rotating around the table. I like the idea that you can play on different surfaces to get a different gameplay experience. And for whatever it's worth, I always--always--play as the Phantom Cosmonaut.

I have two big gripes. The first is that the glossy components tend to slide around on the playing surface, unless you have a felt table, I suppose. It means that pieces tend to shift and that can create ambiguity in how you are supposed to place your pieces. The second is that the character stands have a weak spot where the gear indicator goes, as can be seen below. 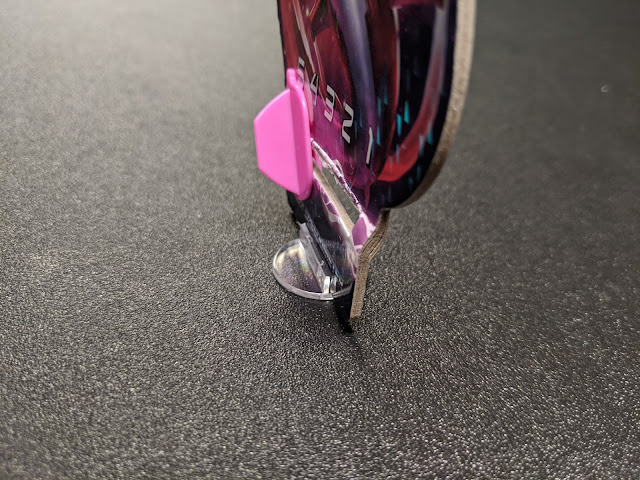 When it was Kickstarted, it had two promotional characters in its stretch goals, but if you buy the game retail those are typically included. The fun thing is that they are characters from Sentinels Of The Multiverse--Captain Cosmic and Visionary--and they have unique character-specific abilities. It would have been nice if more of the stretch goals had unlocked, enough to allow for a promo variant for each color, but such is the way of Kickstarter.
Oh yeah. There's also a soundtrack available.

In keeping with the aesthetic, this game is awesomely cheesy, and a nice little nostalgia trip for aging Gen-Xers like me.

Tune in next week when we try to find the elusive Lost Legacy...
In Acquire-To-Zendo, Kurt is going through his favorite board games in alphabetical order. Read the explainer or see more posts.