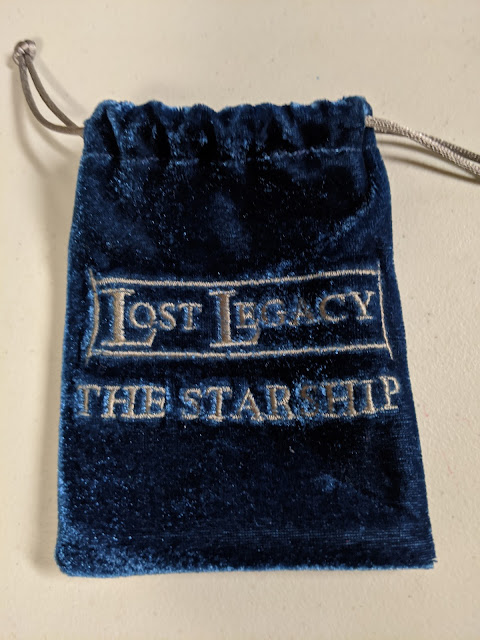 2014, 2-4 players
Complexity: light
Eons ago, an alien craft crashed on our planet, scattering its pieces across the world. Those pieces became legends and myths lost to time and history. But now you, a fantasy adventurer, are going to try to find them. 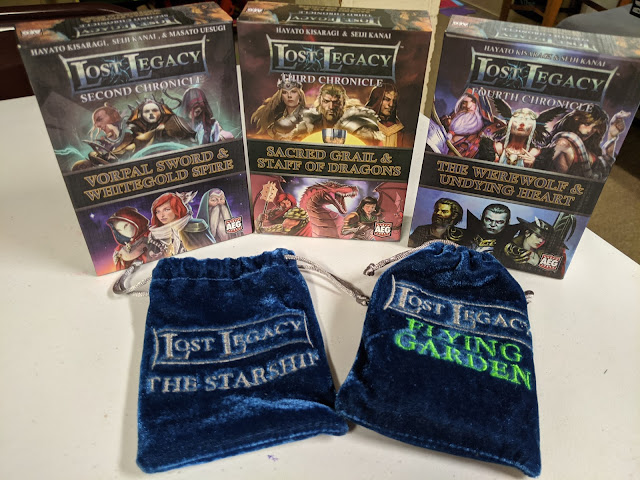 Lost Legacy is a series of "microgames" put out by AEG based on a Japanese game series that was itself a spin-off of the better known investigation and deduction game Love Letter. In Lost Legacy, you and up to three friends play fantasy adventurers trying to find the elusive Lost Legacy. Each game has the same basic setup: there is a deck of 16 cards numbered 1-8. Cards 1-5 have one copy each, card 6 has two copies, cards 7 and 8 have three, and there are three more cards that are just numbered "X". In all sets, the card you're looking for is number 5, the Lost Legacy. 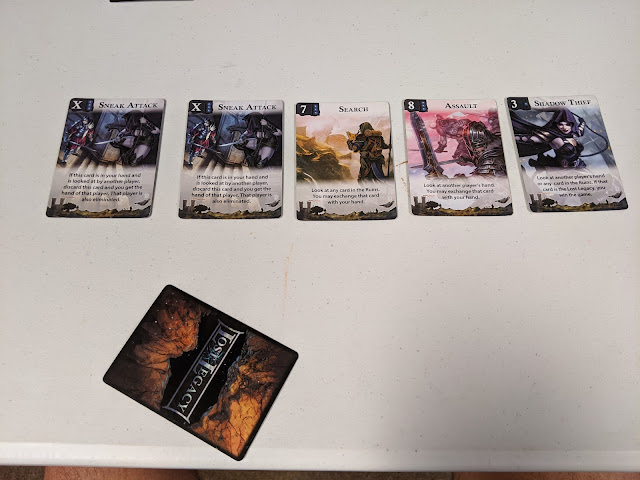 Each player has a hand consisting of exactly one card. There's the draw pile, and one card is set aside to form the Ruins. On your turn, you draw one card and play one card. Cards will allow you to look at or manipulate other people's hands, eliminate players, add cards to the Ruins, search through the Ruins, manipulate people's discards, etc. As you gain information, you are trying to find and keep track of where card 5 is and eliminate other players who might get to it before you do. If you're ever the only player still in the game, you win. However, if the draw pile runs out, you move on the Investigation phase. 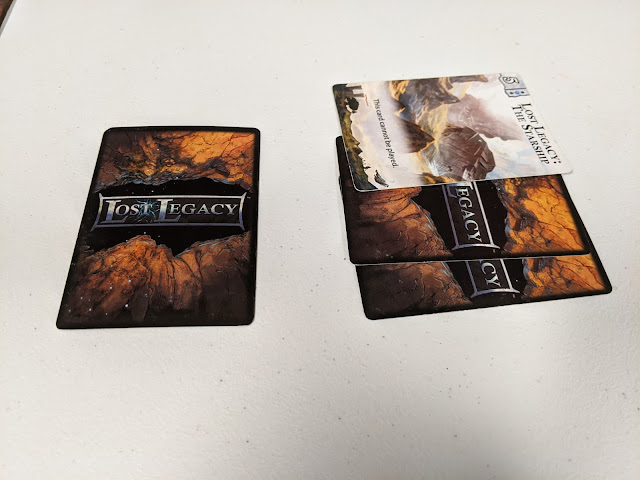 In the Investigation phase, players each get a turn to try to find the Lost Legacy. The turn order is determined by what card is in your hand. If you have the 1, you get to investigate first, followed by the 2, the 3, etc. If two players are tied, neither of them gets to investigate, nor does anyone who has an X card. When it's your turn to investigate, you reveal one card--it can be the card in your hand, the card in another player's hand, or any one card in the Ruins (there are game mechanics that keep the Lost Legacy from ever being in a player's discards). If you reveal the Lost Legacy, you win. If no one does, everyone loses.

Fans of Love Letter will recognize the skeleton of that game here: it's a quick-playing deduction game built around a small deck of cards. However, whereas Love Letter has been re-themed many times and gameplay is always more or less the same, each version of Lost Legacy changes gameplay mechanics substantially. For instance, the X card in Lost Legacy: The Starship is "Sneak Attack", a card that lets you eliminate another player if they look at your hand. In Lost Legacy: Flying Garden, the X card is "Wound" and you are yourself eliminated if you ever have two of them in your discards.
Generally, lower-numbered cards are more powerful, so there's a tension between wanting to play them to get the benefit and wanting to keep them so you'll have a better spot in the Investigation phase. By the Investigation phase, generally about half of the cards are visible, so you're trying to make educated guesses about what cards are in the Ruins and each others hands, not just because you want to find the Lost Legacy but also because you want to find it first.
Each version tries very hard to have its own personality. The Starship is very straightforward, but Flying Garden has ways to lengthen gameplay and get more cards into the Ruins while also giving players more guesses during the Investigation phase. Staff Of Dragons has two very powerful dragon cards that will eliminate players based on the cards in their discard piles, and if you ever play the Lost Legacy card while you have both dragons, you win. Whitegold Spire uses a scoring system where finding the Lost Legacy earns you points, but that's not ultimately what determines who the winner is. I think it was Vorpal Sword that let's you manipulate your Investigation speed based on the cards in your discard. There's a lot of variety built around the same mechanics.
The game also comes with campaign rules and tracking cubes, in case you want to play a longer game. And any two editions can be combined to make a five or six-player variant, which gives you even more variety.

It's definitely a weaker game when played with only two. Because there's a fair amount of player elimination, two-player games rarely get to the Investigation phase. Some versions are more bloodthirsty than others, so a game of Lost Legacy: Undying Heart can eliminate you before you even get a chance to play, and that's just not fun at all. This game also suffers from the problem that plagues deduction games: sometimes you just don't have enough information to make an informed guess, and in those situations winning or losing can feel a little arbitrary.

Not directly, although with the re-combining possibilities mentioned above, each edition can be used as a stand-alone expansion to any other edition.

This scratches the same kind of itch as Love Letter, although I like this one better because of the added variety. It's light and fast, but one you can play five or six times in a row and still have a fun gaming experience with.

Tune in next week when we take our party of fantasy adventurers to the mall in Magic Maze...
In Acquire-To-Zendo, Kurt is going through his favorite board games in alphabetical order. Read the explainer or see more posts.