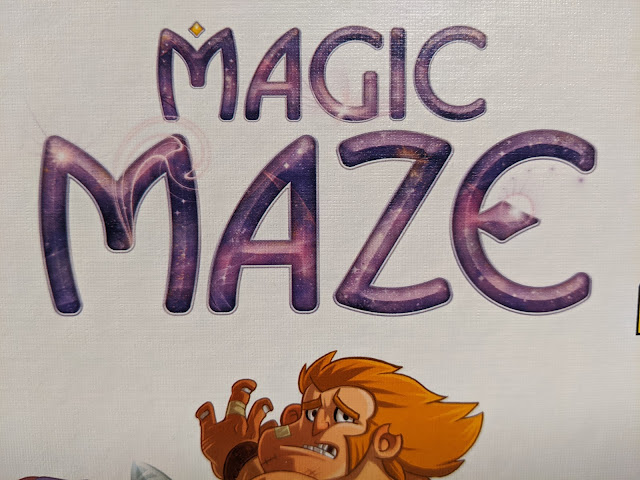 2017, 1-8 players
Complexity: light/moderate
An elf, a dwarf, a warrior, and a mage are preparing to go adventuring, but first they need to gather up some equipment. They'll need a bow and arrow, an ax, a sword, and a potion, respectively. To secure these items, they'll need to navigate a procedurally-generated dungeon... and by "dungeon" I mean "shopping mall". 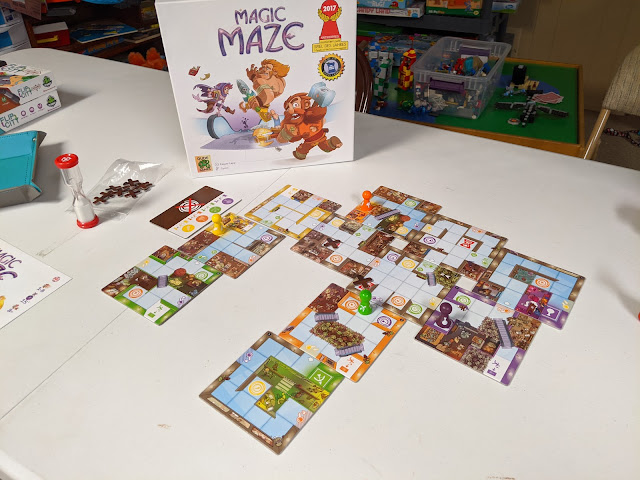 In Magic Maze, you and up to seven friends will be tasked with navigating your party of heroes through a randomly generated shopping mall. Each adventurer will need to find their way from the starting tile to the tile with their item on it. Once they have all landed on their spaces, they'll need to escape, and all of this has to happen before the three-minute sand timer runs out. 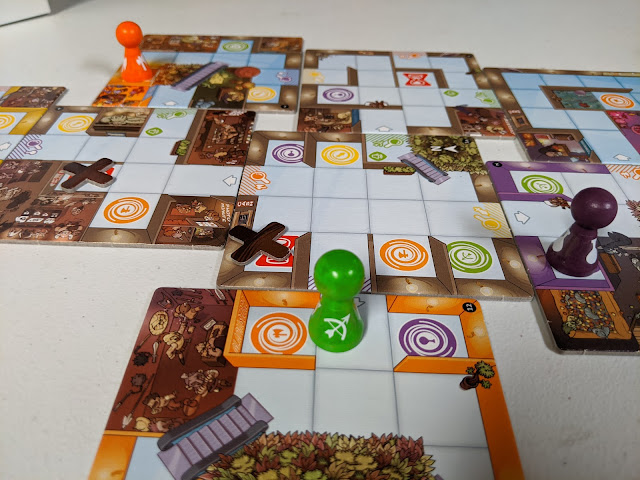 The gimmick with this game is that players don't control individual pieces. They control directions. There are seven actions a player can take: they can move a pawn in one of the four cardinal directions, they can explore (lay a new tile), they can go up or down an escalator, or they can send a pawn to a vortex that matches its color. But any one player can only control a subset of these actions. 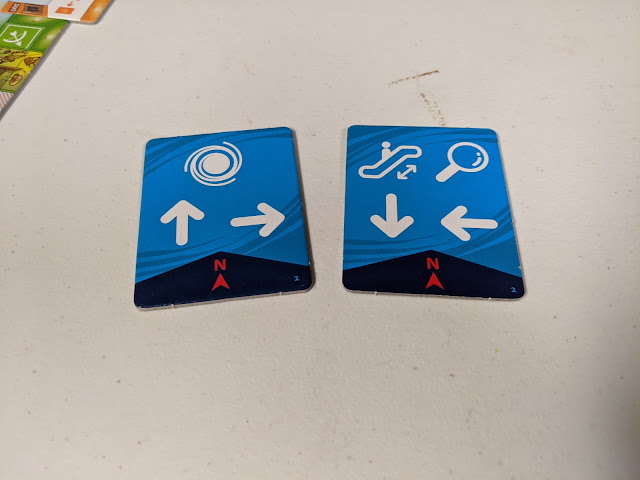 In a two-player game, on person can move any pawn North or East or use a vortex. The other player can explore, escalate, or move South or West. In a higher player-count game, individuals have fewer actions. 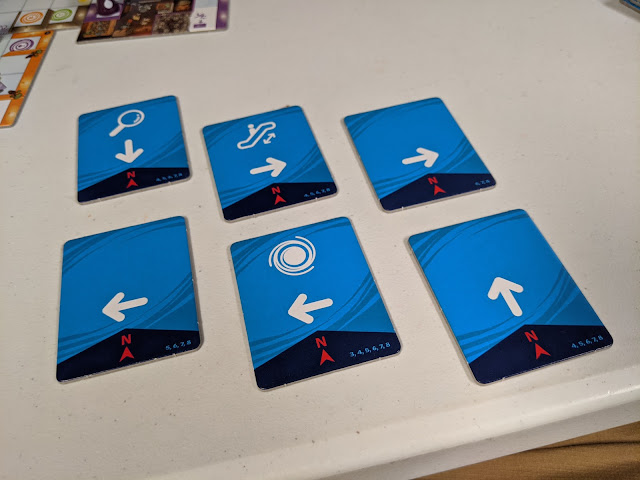 Oh, and one more thing. All of this has to be done without talking. Players are not allowed to communicate--you can't talk, you can't point, you can't gesticulate wildly. The only communication allowed is placement of a giant red pawn. Anyone can take it and place it in front of another player to indicate that you want them to do something. But it's not always obvious what you want them to do, since you have four pawns with unique objectives, unique exits, and unique capacities to explore--e.g., only the dwarf pawn can explore on a space with an orange search icon. 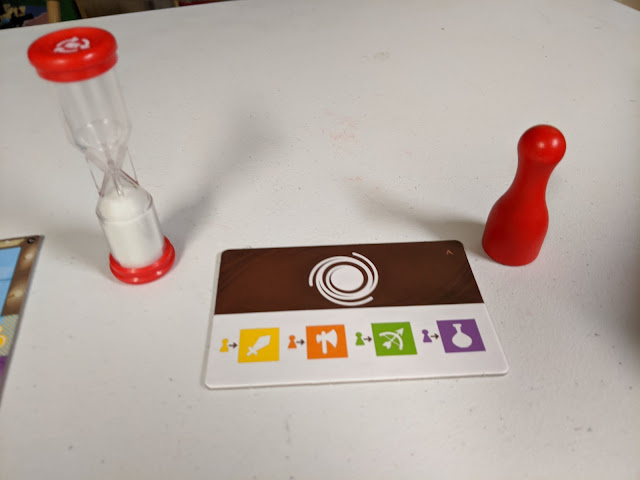 There is talking permitted in one situation. There are a number of hourglass spots on the bored, and if one of your pawns lands there, you can flip the sand-timer and talk to each other until you start moving pawns again. Hour-glass spaces are one-time use, though, so you have to ration them carefully. 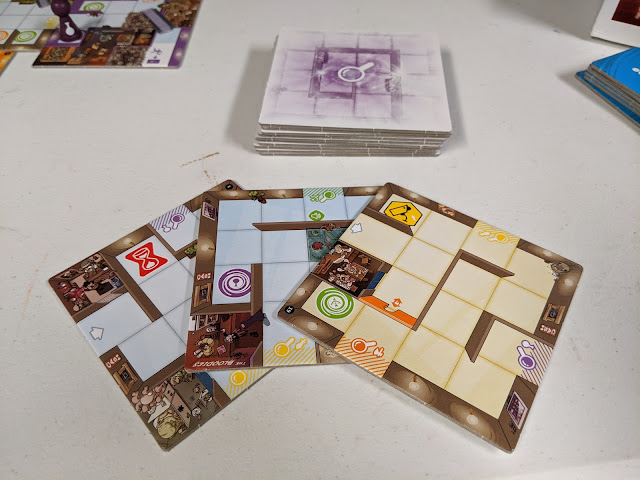 The game has seventeen scenarios that increase difficulty. The starter scenario only uses nine tiles and all pawns leave through a single exit. The final scenario uses twenty-four tiles, and not only are there unique exits, there are passages that can only be taken by one pawn, security cameras that must be disabled, and the added complication that everyone passes their action cards to another player whenever you use the timer. This isn't a game you beat so much as a group psychological test where you see how far you can advance before someone starts frustratedly slamming the red "do something" pawn in front of you. 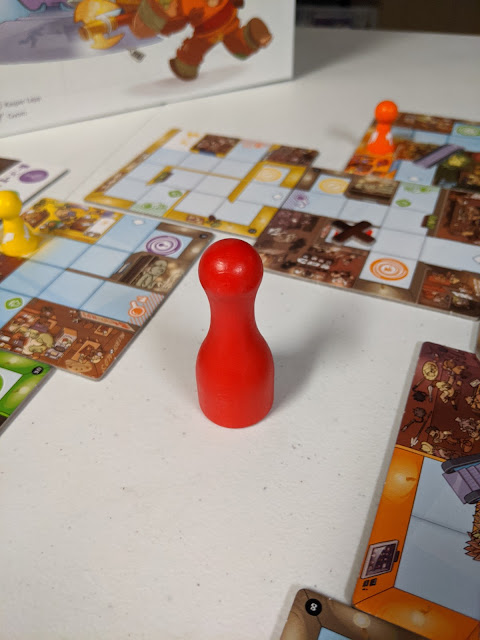 The typical reaction to playing the first scenario of this game is something along the lines of "This is really simple, so how did we lose so badly?" It's a counter-intuitive game mechanic where you really have to train yourself and your fellow players to anticipate each other's strategic priorities--which are constantly shifting as new tiles come out and get added to the maze. When do you stop exploring and go for items? When should you use the hour-glasses? Which pawns is going to make their escape first?It's truly rewarding when your group coheres and you're able to take on some of the challenges.

This is a game that you binge-play for seven hours and then completely forget about for six months. It's a whole mindset that can be mentally exhausting. It's also an easy game to get frustrated with.

There are a handful of promos including some new tiles and as well as two proper expansions: Maximum Security, which adds a bunch of optional modules that increase and decrease difficulty, and Hidden Roles, which adds a traitor mechanic. I haven't played either of them.

It's almost more of a collaborative logic puzzle than a game, but one's a lot of fun with the right crowd.

Tune in next week when we take on the forces of evil in Marvel Legendary...
In Acquire-To-Zendo, Kurt is going through his favorite board games in alphabetical order. Read the explainer or see more posts.